The Best Area to Stay in Paris

Knowing where to choose accommodation in Paris often poses a problem for first time visitors. If you’ve never been to the City of Light, it’s difficult to imagine exactly what it’s like and what area to choose. I’m always surprised when I learn that travel agencies have recommended hotels near the Eiffel Tower or Montmartre, for example, because they’re so far from anything else.

Ile de la Cité, the historical centre of Paris, in the middle of the Seine

The main artery in Paris is the Seine. The city “intra muros” as the French say (within the walls) is in the shape of a rough oval with the Louvre more or less in the centre. The historical centre, with Ile de la Cité, the main island in the Seine and home to Notre Dame Cathedral, is slightly to the east. South of the Seine is the artistic Left bank, while the more shopping-oriented Right Bank is north. The oval is divided into twenty districts called arrondissements, forming a spiral starting in the middle.

First-time visitors often only come for a few days and want to see a maximum number of sights so it’s important not to spend half the time on the metro, efficient though it may be. Also, the best way to soak up the atmosphere of Paris is on foot. You may need to downscale your sightseeing list. You’ll enjoy the City of Light much more if you leave plenty of time for just wandering around the smaller streets, enjoying the sidewalk cafés and watching the sunset. 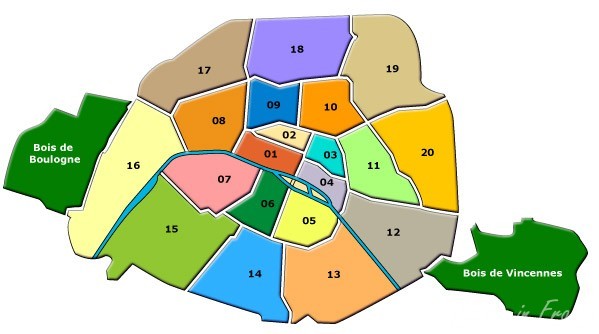 The 20 arrondissements in Paris forming a spiral

To decide where to stay, you should first make a short list of the places you want to see. The Eiffel Tower, Notre Dame and Sainte Chapelle, the Louvre, Orsay and Orangerie Museums, the Latin Quarter, the Sacré Cœur, Montmartre and perhaps the Moulin Rouge, the Marais and the Champs Elysées will probably be high on your list. If you’re only staying three or four days, two museums will probably be enough and even then, you’ll have to select the main works or you’ll soon suffer from museum fatigue. If you want to go to Versailles, you’ll need to set aside an entire day.

Once you’ve drawn up your list, take a look at a map and see where they are. You’ll find that Notre Dame, the Louvre, Orangerie and Orsay Museums and the Latin Quarter are all more or less clustered around the same central area with the Marais slightly to the east. The Moulin Rouge, Sacré Coeur and Montmartre are up in the north on a hill called Butte Montmartre and the Eiffel Tower is off to the west. 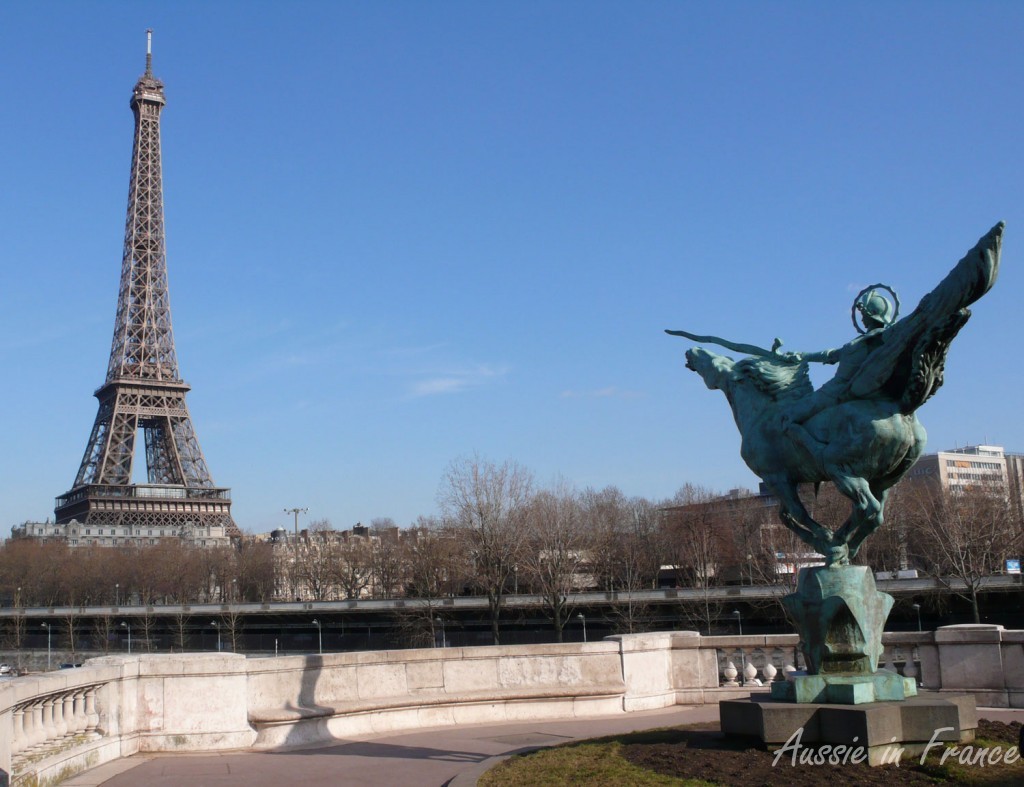 One important thing to remember in Paris is that, unlike large US and Australian cities, a block on the map is only a couple of hundred metres. The walking distance between two metro stops is quite short, often only ten minutes. I can powerwalk from the Louvre to Concorde in ten minutes, yet there is a metro stop inbetween.

If the Moulin Rouge is on your list, it will no doubt be at night so you can visit Montmartre and the Sacré Cœur before the show. If you stay in that area on your first visit to Paris, you’ll be spending quite a lot of time on the metro, often at peak hour, if you want to see the other sights. The same applies to staying near the Eiffel Tower. You certainly won’t be able to walk everywhere.

Now look at the metro map. You’ll see there is a yellow line (n° 1) running west from Nation, through Bastille and along the Seine to Concorde, with Notre Dame, the Louvre, the Tuileries and Orsay museums along the way. It then goes underneath the Champs Elysées to the Arc of Triumph (Charles de Gaulle-Etoile). From line n° 1, you can get to most other places in Paris with a single metro connection.

There is a second red line (RER express line) that also runs from Nation to Charles de Gaulle via Opéra where the big department stores are (Galéries Lafayette, Printemps) that you can use to go quickly from one point to another when your destinations are further apart. Several buses run along the Seine, in particular bus 72 from Hôtel de Ville down to the Eiffel Tower. Bir Hakeim bridge probably affords the best view of the tower which is at its most attractive when it’s scintillating at night. 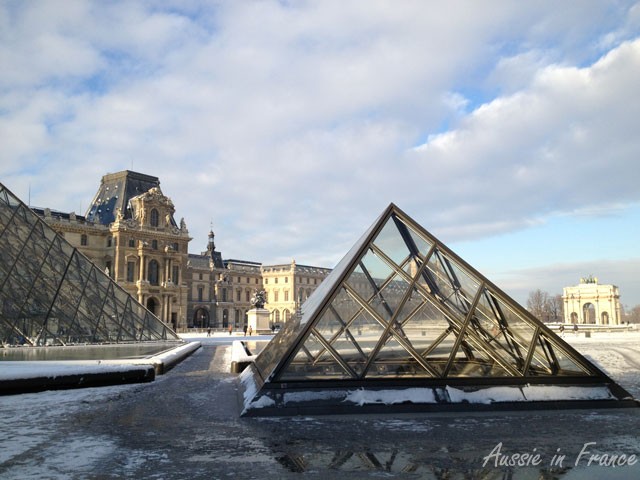 The Louvre Pyramid in winter

My personal experience from living in Paris for many years is that staying in the 1st or the 4th arrondissements, on the right bank, within a 10 minute walk of metro line n°1 is the most convenient solution as you will be able to walk to most places and take a quick trip on the metro to others. The 1st is more central and the 4th is more atmospheric.

You may have to pay a little more for your hotel, but you may find that it’s worth it in the long run particularly at night as you will have so many restaurant choices within walking distance, on both sides of the Seine, and you can stroll along the river afterwards. 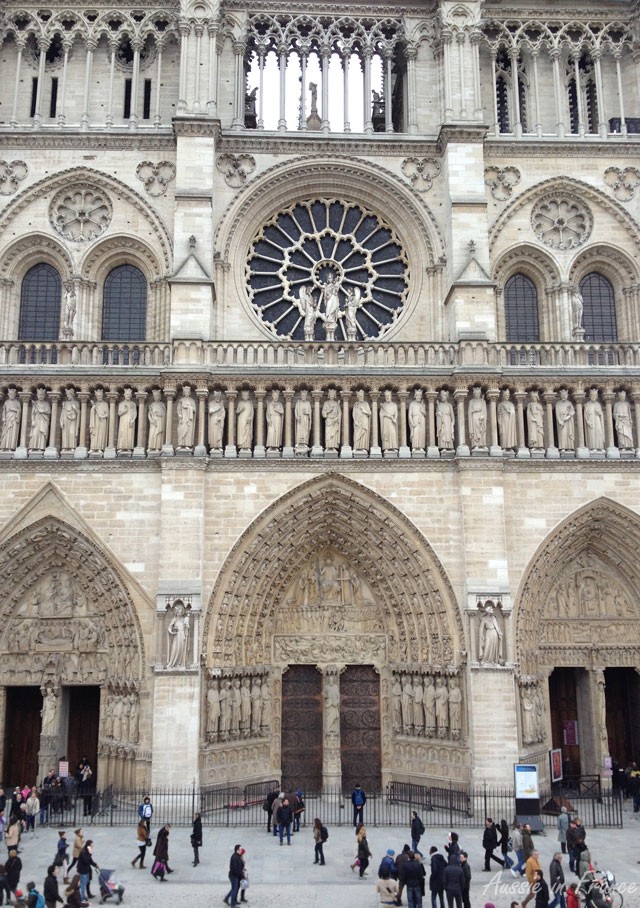 If it’s typical French ambiance you’re looking for, rather than sightseeing, you may prefer the 5th or 6th on the Left Bank, which are touristy but lively. If you want to be off the beaten track but still get the feel of Paris, go for the 10th, 11th, 17th or 20th. And if you’re on a tighter budget, add the 18th and 19th, with access to a park like Buttes-Chaumont or around the Canal St Martin for instance, which is more ‘normal residential’ and very popular with trendy Parisians at night. You are still only a few stops from the centre and won’t spend too much time on the metro.

You might like to check out Lisa Czarina’s post on Young Adventuress for more details about each arrondissement, particularly if you’re in your twenties. And if you have more than a couple days up your sleeve, you might like to consider renting a typical Parisian flat, a barge on the Seine or airbnb (for useful tips see Simply Sara Travel’s post on choosing the right accommodation).

And while you’re in Paris, why not take a side trip to the beautiful Loire Valley with its many châteaux. You can even do it easily without a car by staying in Blois. Click here for more information.

Enjoy your trip and do let me know if you think this post is useful by liking it on facebook. Also, don’t forget to read the comments as well as they contain some very useful suggestions.

This entry was posted in Accommodation, Paris, Sightseeing and tagged accommodation in Paris, sightseeing in Paris, where to stay in Paris. Bookmark the permalink.

128 Responses to The Best Area to Stay in Paris