The Truth about Making Cappuccino Part 2

The first time I went to Telescope in rue Villedo near the Palais Royal about a year ago, it felt like an insiders’ club. No one greeted me. The only thing written on the blackboard was café, there was no menu and I had to ask someone if they could remove their books from the only available chair and table. When I asked for a cappuccino, I had the impression I had committed sacrilege. 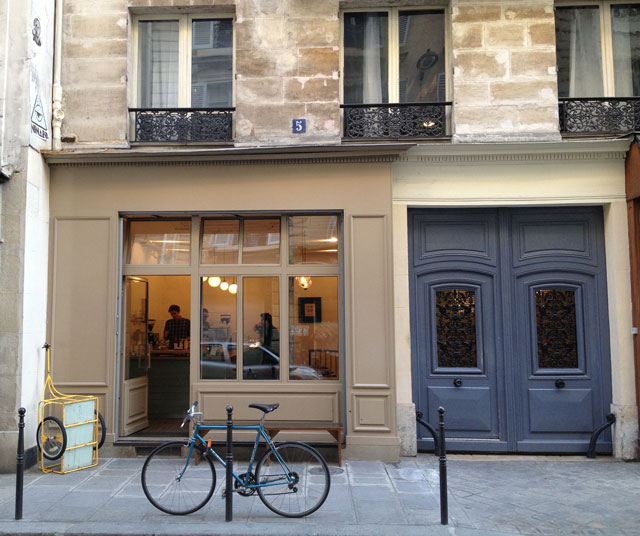 However, after reading an article in Le Monde about the new coffee scene in Paris, I decided to give Telescope another chance. To quote Le Monde*, “Over the last few months, scores of coffee bars have appeared in Paris, to the great satisfaction of students and foreign tourists, delighted to be able to have a decent coffee at last, and not those horrible petits noirs with their bitter smell of soot that leave a taste of cold tobacco in your mouth”. Telescope was on the list. 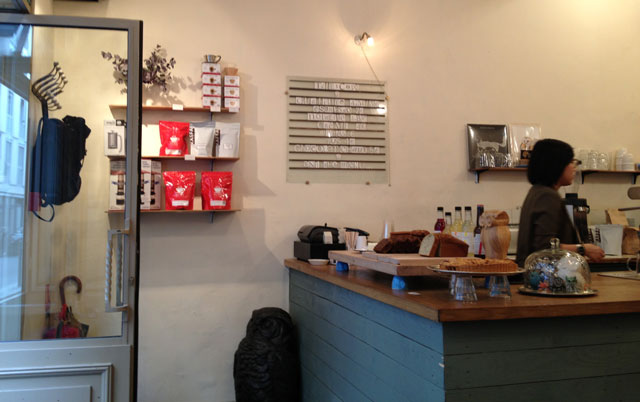 It’s a beautiful sunny day, an unbelievable 24° after a terrible cold rainy spring. I see a couple of people sitting on the ledge outside. When I walk in, I can see some changes. The blackboard has acquired a few more entries, there are lots of cakes and the waitress greets me. I ask if I can have a latte and sit down.

I watch what the barista is doing and he gives me a friendly smile. My latte is ready so I go to the counter to get it. “Bonjour“, I say, “I’m just wondering exactly what the difference is between a latte and a cappuccino”, I continue in French. He starts to answer and I hear his accent so I switch to English. “Oh, Australian”, he says. I laugh. “Kiwi then?” “No, Australian”. 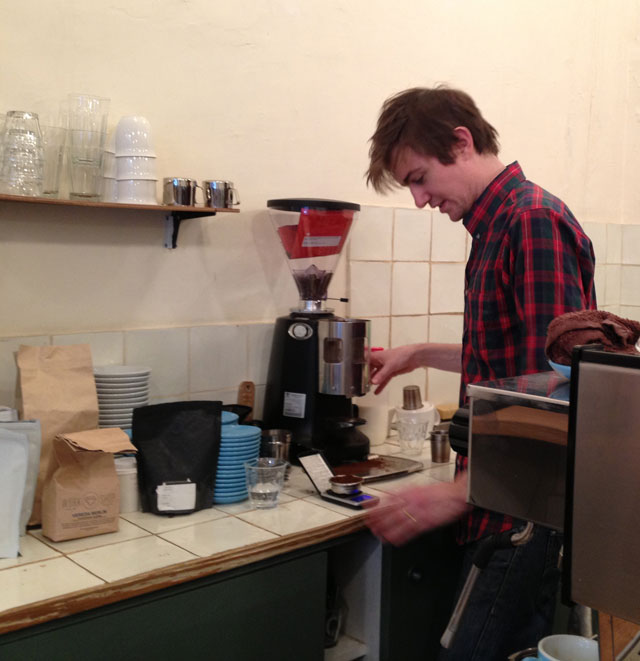 Weighing out the coffee

He explains that lattes differ from one coffee bar to another and that the only thing that really has a definition is cappuccino. I’m relieved. What I encountered in Australia under the name of latte seemed to be what I had been ordering in Italy as a cappuccino. So, it has one shot of coffee and the rest is foamed milk. Lattes usually have more less milk.

Tom, it turns out, comes from Nambour, just north of Brisbane, so he’s a fellow Queenslander, who trained in Dublic as a barista and has been at Telescope for about six months. I start telling him about my espresso machine adventures. 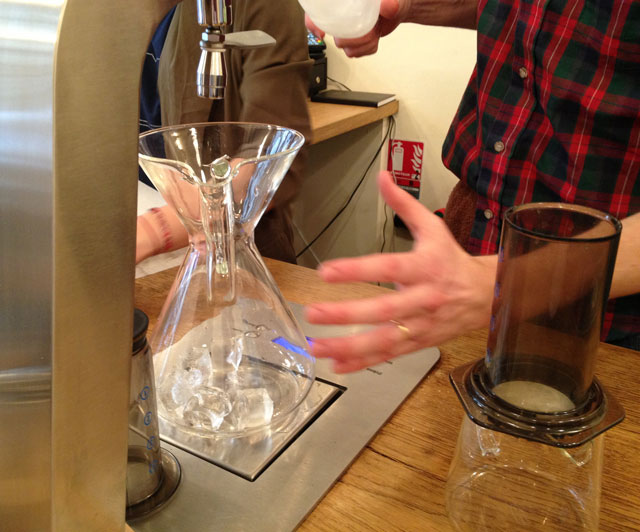 Three people come in and order a filtered ice coffee and an espresso. I am surprised to see that Tom is weighing everything – the beans, then the ground coffee, and later the espresso itself. He explains it’s an exact science. So what happens if the weight of the final coffee (the “yield”) is wrong? He throws it out and starts again ! 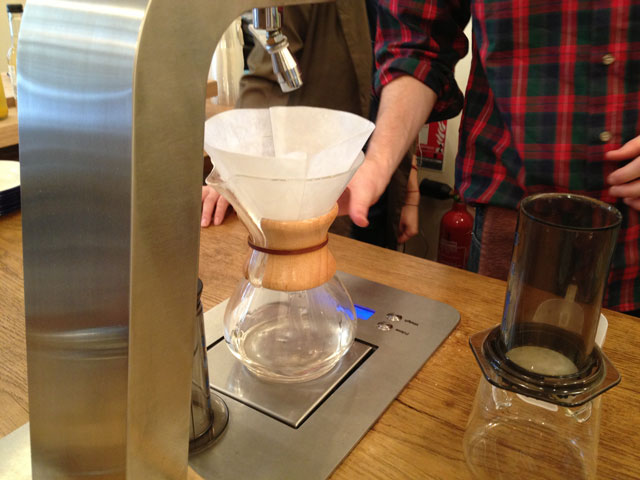 The filtered ice coffee is even more intriguing. The machine consists of a bottom scale and a top drip system whose coffee pot looks like an hourglass-shaped wine carafe. First he puts ice cubes in, checking their weight. Then he puts a filter in the neck of the carafe and adds the weighed ground coffee which is more concentrated than for an espresso. 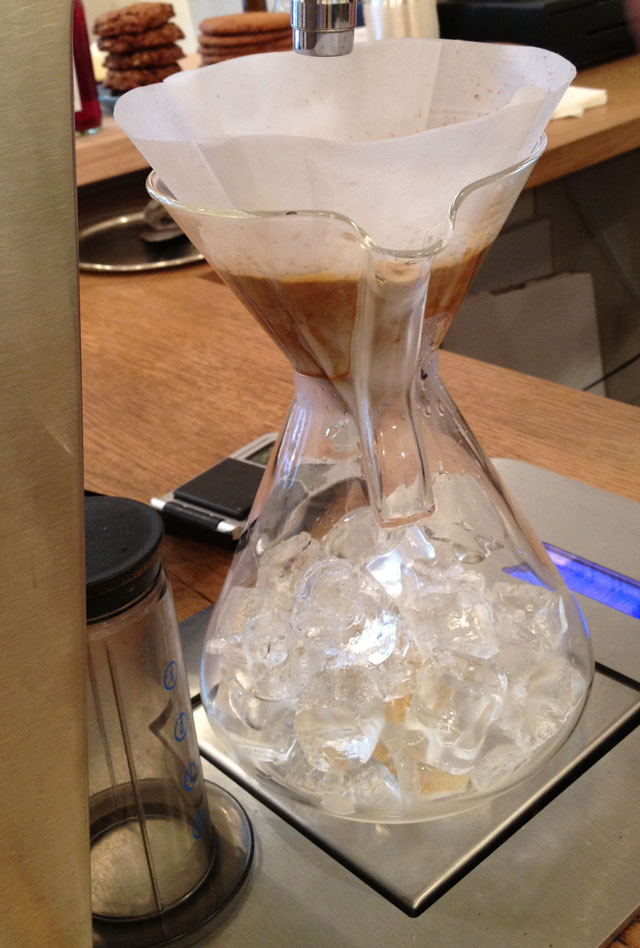 The water starts dripping through the filter; the resulting coffee drips into the carafe and onto the ice cubes. Tom puts a weighed amount of ice in the two glasses, tips out any melted water then pours in the coffee, making sure that the ice cubes don’t escape. Ready to go! I’m intrigued. Do French people order that? No, just English speakers! 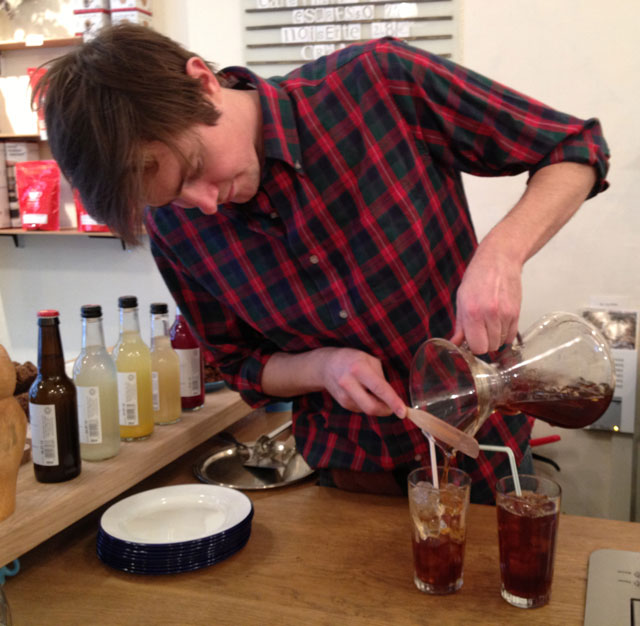 Pouring the iced coffee into the glasses

I ask whether there are any chances of a barista lesson and I am delighted to hear that several other people have also expressed there interest  and that when they have at least five, they’ll run a class on Sunday morning. All I have to do is “like” their facebook page and watch for the announcement.

I walk out entirely satisfied with my visit and eager for my first barista class. Who wants to join me?

This entry was posted in Food, Restaurants and tagged cappuccino, rue Villedo, Telescope. Bookmark the permalink.

9 Responses to The Truth about Making Cappuccino Part 2