The Truth about Making Cappuccino Part 1

You may remember my desperate attempts to make cappuccino during the winter. Well, now I know the truth. It’s the espresso machine that makes all the difference. 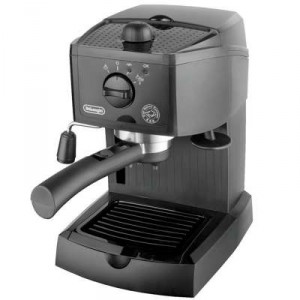 I now have intimate knowledge of three different machines: the cheap-O model we bought new in a second-hand shop somewhere near Blois, the superduper expensive Pavoni that grinds the coffee as well and a mid-range non-grinding DeLonghi bought for Closerie Falaiseau when the cheap-O one gave up the ghost. From the very first cup, the DeLonghi produced perfect milk foam. 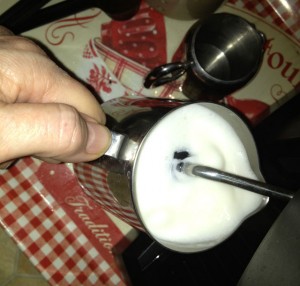 Perfect foam with the Delonghi

Initially, I thought it was because I had acquired the requisite skills but when our first guests arrived at the Closerie and we moved into the kitchen of the little house, I used the cheap-O one that Jean Michel had repaired in the meantime. The first foam was a complete failure. Just sticking the milk jug under the wand no longer worked. 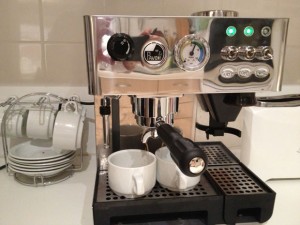 We got back to Paris and I used the superduper Pavoni again, the results were just as disastrous. It took me a few days to remember the method I had precariously developed previously. But the results are still not as good as they are with the DeLonghi.

Now what is it that makes the DeLonghi so much better than the others? 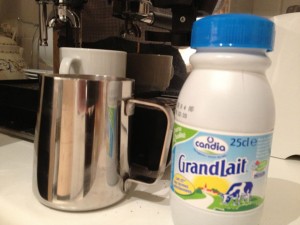 For all three, I’m using half-fat milk and I’m putting my little stainless steel jug in the fridge. All three wands are straight although I’ve read that they’re supposed to be at a 45° angle. I still can’t see why tipping the jug to form the same angle with the milk doesn’t achieve the same result, by the way, but maybe someone can supply the reason.

When I first saw the DeLonghi in the shop, I was very dubious. The wand is much shorter than the other two and has a thick almost cone-shaped skirt but the guy selling it at Darty in Blois assured me it would be perfect. He said he’d worked as a garcon de café in Paris in his previous life. Not that that was really a recommendation. We all know how terrible coffee is in most French bars. 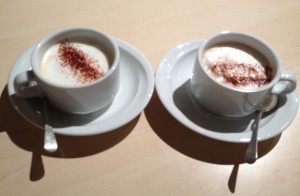 One of my early attempts

Anyway, when I tried it out, it was perfect. It’s also very easy to clean – you just unscrew the skirt and rinse it under the tap. With the cheap-O one and the Pavoni, you need a wet cloth to wipe off the milk immediately. 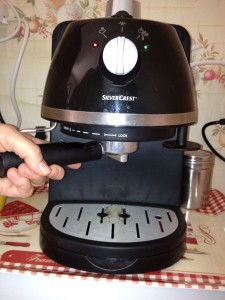 So what do you do if you don’t have a wand with a little cone-shaped skirt? The trick is to keep the tip of the wand just under the level of the milk, so that it’s not making big bubbles. You can see the milk sort of being sucked into the tip of the wand. As the foam develops and the milk takes up more volume, you have to move the jug down so that the tip remains just below the surface.

Once you feel the milk heating up (you need to keep your hand around the jug), you have to turn off the steam quite quickly or you’ll scald the milk which gives it a sickly sweet taste. With the Pavoni, it happens really quickly. I don’t have the same problem with the DeLonghi. 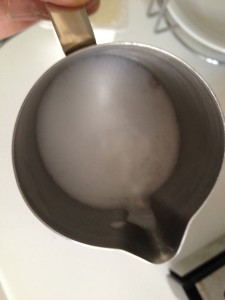 Of course, it’s not that easy to practice without using up lots of milk but someone came up with a brilliant substitute. Just one tiny drop of washing up liquid in water will, astonishingly, produce the same results. Well, at least it gives you a better feel of what’s going on without wasting lots of milk. 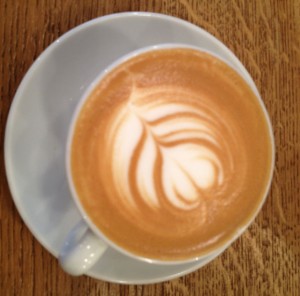 I haven’t made it to latte art yet.  What I really need is a lesson. And I’m not even sure what the difference between cappuccino and latte really is!  So I’m off to Téléscope in rue Villedo to find out. I’ll tell you all about it in Part 2 next week.

2 Responses to The Truth about Making Cappuccino Part 1