We leave Aschach for Bratislava in pouring rain, shortening our stay by 3 days. After a picnic in the car in a desolate rest-stop about 20 minutes out of Bratislava in what must be the windiest part of Austria, in the middle of an immense field of wind turbines, we follow the GPS instructions to our hotel, that we reserved with booking.com the night before and which is supposed to be ten minutes from the historical centre. 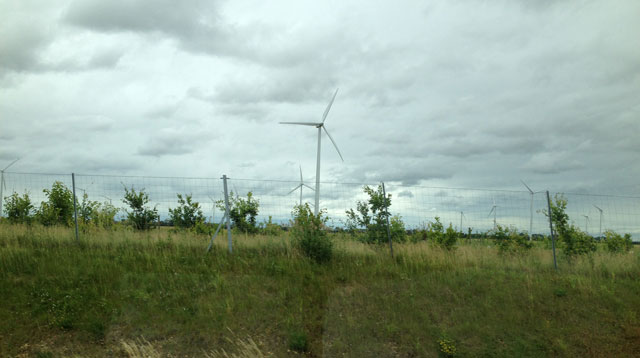 “I don’t like this at all”, says Jean Michel. “We’re not even remotely near the centre”. “Vous êtes arrivé”, says the GPS with not a hotel in sight, just sad-looking low-income high-rise buildings. I get out and go to Zadunasjska cesta 12, after checking it’s the right address, and a helpful lady speaks to me in Slovak. I show her the address on my iPhone and she tells me in rudimentary English that it’s on the other side of a flyover. 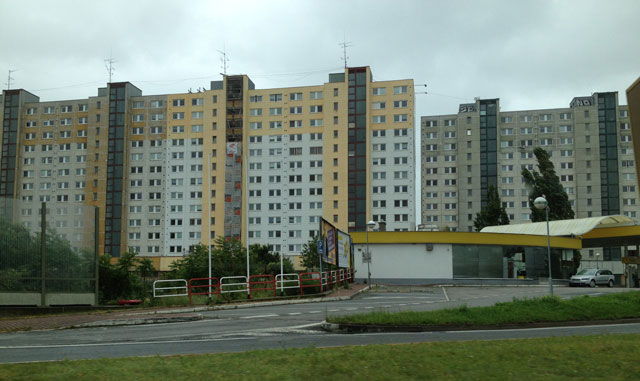 The high-rise buildings where our GPS took us

I get back in the car, doing my best to calm down Jean Michel. He’s convinced we’re the victims of an Eastern European con trick. We try to follow her instructions. At last, we spot the name of the hotel and eventually arrive in a parking lot in what seems to be a small shopping centre. We park the car and follow the signs, up a pedestrian footbridge and into the hotel. 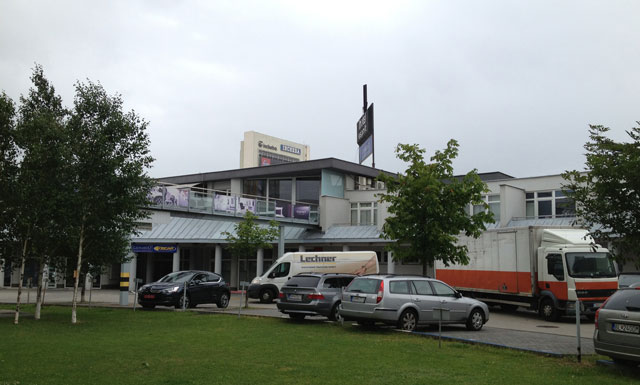 I explain to the hostess that we thought the hotel was close to the historical centre and that we want to cancel. The manager comes out and says that we just have to walk across the bridge over the Danube and we’ll be in the centre – 10 minutes. She explains that with booking.com we have to cancel 24 hours in advance. 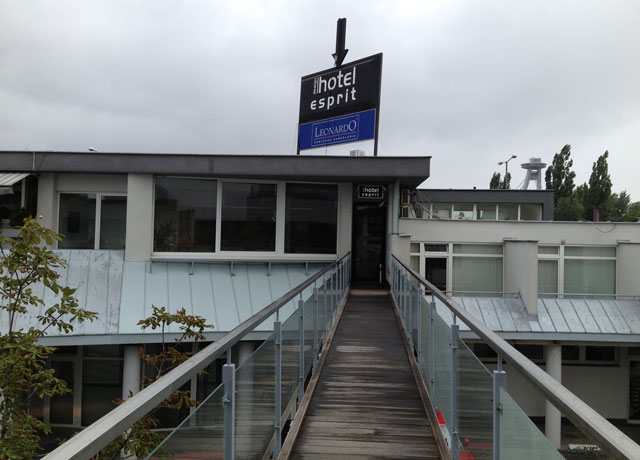 Jean Michel is looking furious so I smile and say that we’ll take the room. The hostess says there is a bus that takes 5 minutes, just two stops, to get to the historical centre. I hear a groan next to me. She gives us the key to the room. The interior is fine, if a little dark and taupe. It has good soundproofing and a decent shower. Unfortunately, I don’t recognise the stale smoke smell straight away. We go down and bring up our small overnight bag and other necessities. 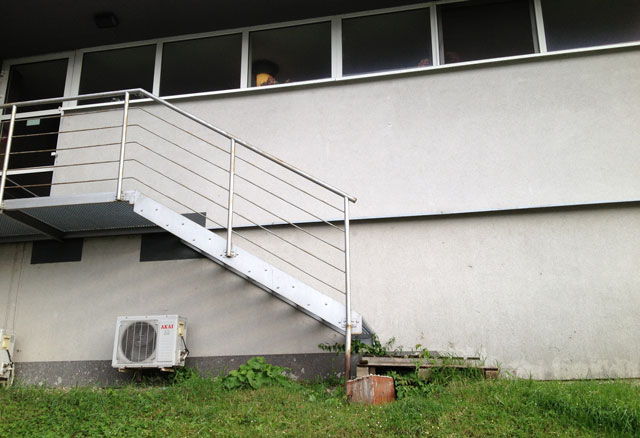 Back steps at Hotel Esprit

In the meantime, the hostess has written out the bus instructions and shows us out the back way, where we have to negotiate a couple of broken planks at the bottom of the stairs. Thankfully, Jean Michel has now decided to make the most of the experience. 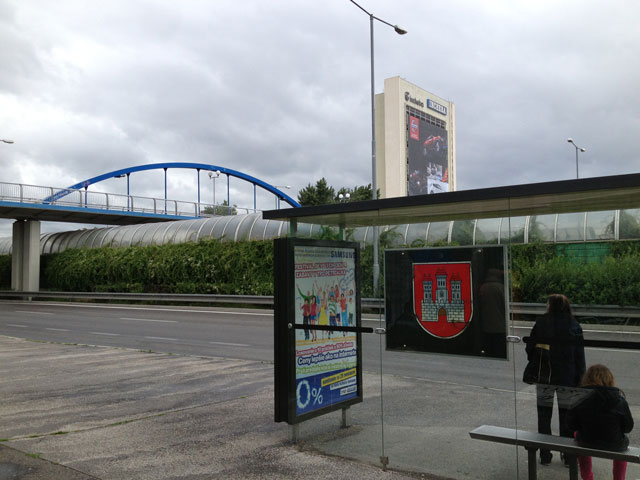 We arrive at the bus stop almost immediately, get tickets out the machine as instructed and wait for the n° 88 which pulls up within a couple of minutes. We go under and over a couple of flyovers, then across the Danube and down into a grotty terminus under the bridge. 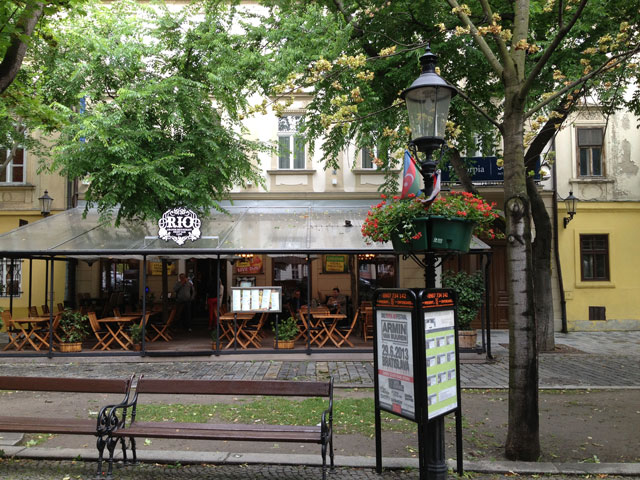 Within two minutes, we are in the pretty though small historical centre of Bratislava. We wander around admiring the various buildings reminiscent of Austria and eventually have hot chocolate and cream cakes at Kaffee Meyer one of the city’s most reputed establishments.  I figure we can give dinner a miss! 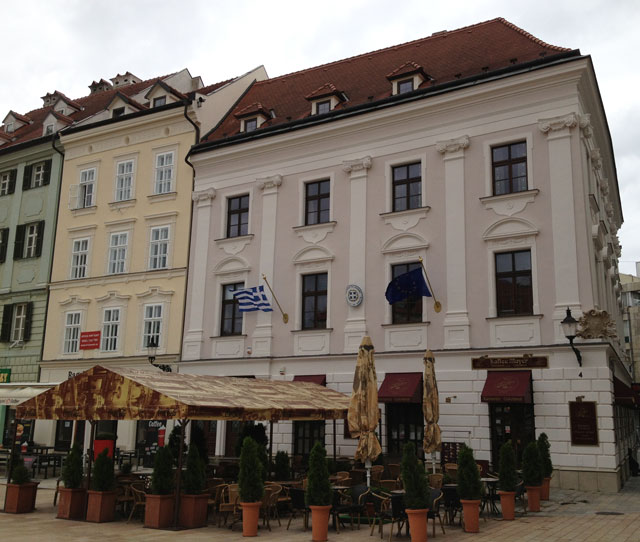 It doesn’t take long to exhaust the historical centre so we go further afield and are struck by the general grime and dereliction. We follow some people into a large church and are introduced to Slovak baroque, much darker than its Austrian and German counterpart. 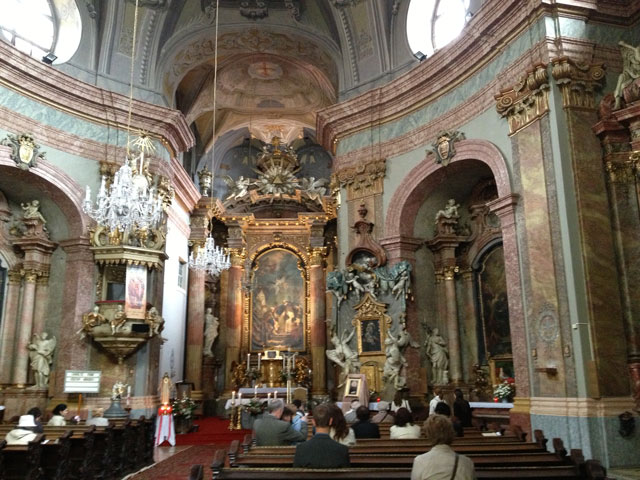 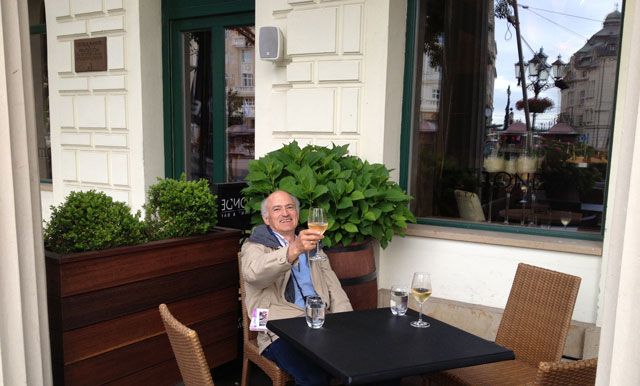 After walking along the Danube to the bridge (and incidentally not regretting that it is too chilly to cycle, as there is nothing much to see apart from the high-rise buildings opposite), we decide to walk back to the hotel since it is only supposed to be 10 minutes from the historical centre. 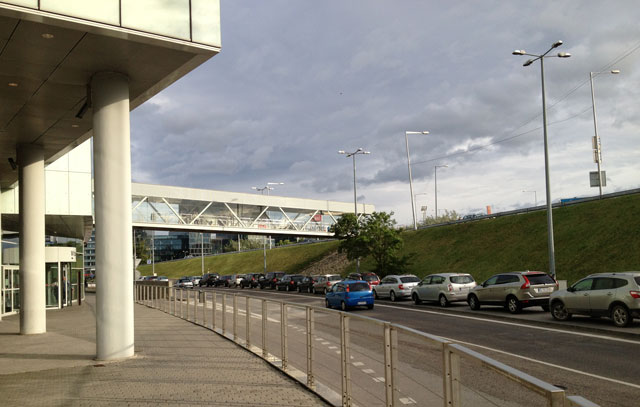 A half an hour later, after walking through a shopping centre full of the same middle-of-the-range shops you find in French shopping centres such as Camaieu and C&A, going over a footbridge, up and down as few staircases, under a couple of flyovers and along an overgrown path, we finally arrive at our hotel. 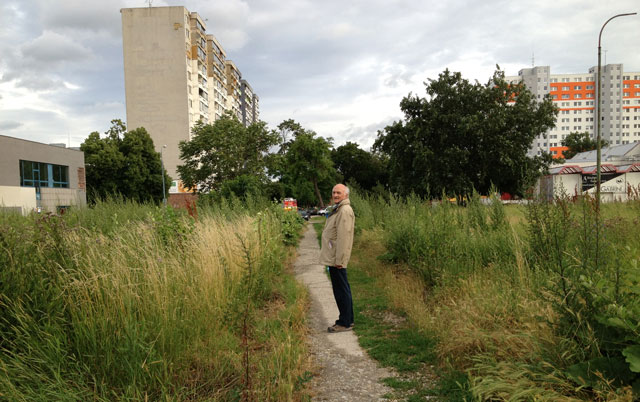 Jean Michel on the path back to the hotel

That is when the stale cigarette smell hits me. We keep the window open until we go to bed despite the cold outside and the noise of the expressway but I feel slightly nauseous and headachy all night. Two women talk in piercing voices somewhere until about 3 am. A sort of whining noise is repeated at regular intervals, probably due to the wind on the pedestrian walkway. 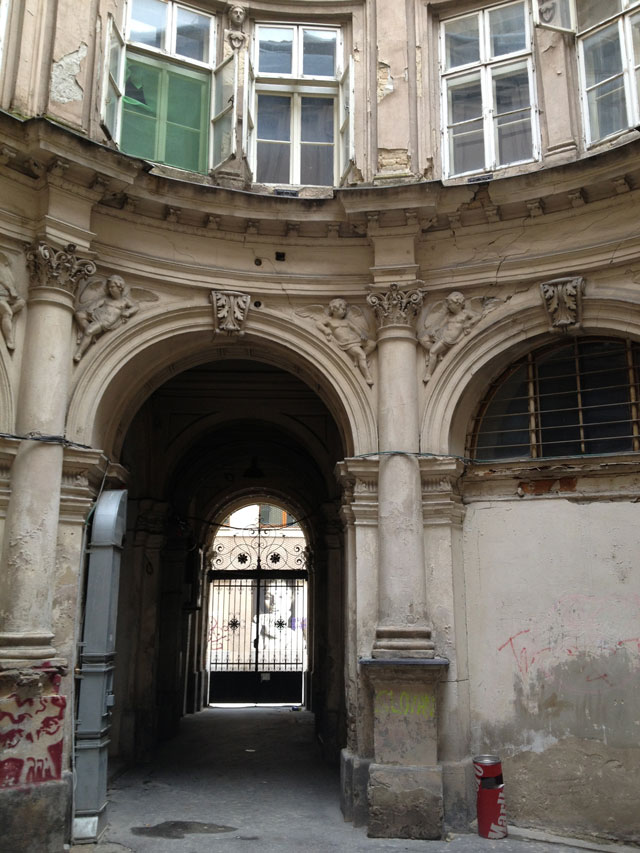 A derelict building in Bratislava

By 7.30 am, doors are banging, showers are running and toilets flushing. After breakfast, where there is only herbal tea but very good bread, we leave the Hotel Esprit and Bratislava without regret!

This entry was posted in Accommodation, Slovakia, Travelling. Bookmark the permalink.

4 Responses to Bratislava, a Memorable Experience