We’re driving along the motorway to Budapest pleased to have our Aschach and Bratislava accommodation experiences behind us. 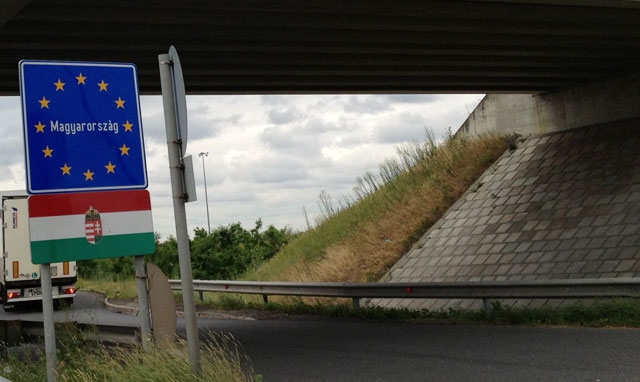 This time, there should be no problems. We have organised a home exchange with an American couple who have a well-located apartment in the centre of Budapest which they let and exchange. They have kindly agreed to our arriving ahead of schedule because of the bad weather in Aschach. We can arrive on Wednesday around noon and L. will be there to give us the key.

We leave Aschach on Tuesday and stay overnight in Bratislava which is a two-hour drive from Budapest. We arrive about fifteen minutes ahead of time, park right in front of the appartment, get some florints out the bankomat, buy a couple of things for lunch and feed the surprisingly expensive parking meter. 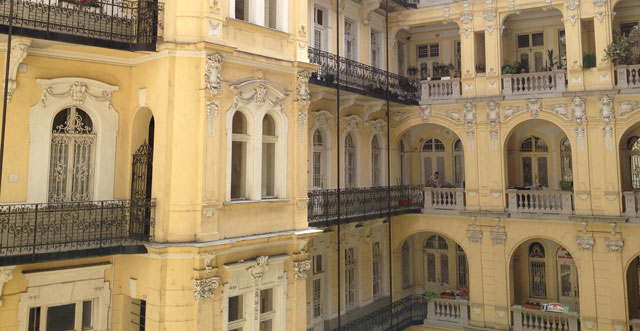 The appartment we almost stayed in!

L. arrives on cue, very apologetic. There is no electricity. His father has been looking after the apartment for A. but is now in hospital after major brain surgery and the last electricity bill has not been paid. He takes us up to the apartment, which is spacious and has everything we need, in particular a washing machine which is starting to become a major preoccupation.

Jean Michel goes into panic mode, much worse than in Bratislava and is looking furious. Neither L. nor I has A’s phone number unfortunately but L has sent her an email. Apologising profusely, L.  goes off to look after the electricity problem saying he’ll be back in an hour or so. 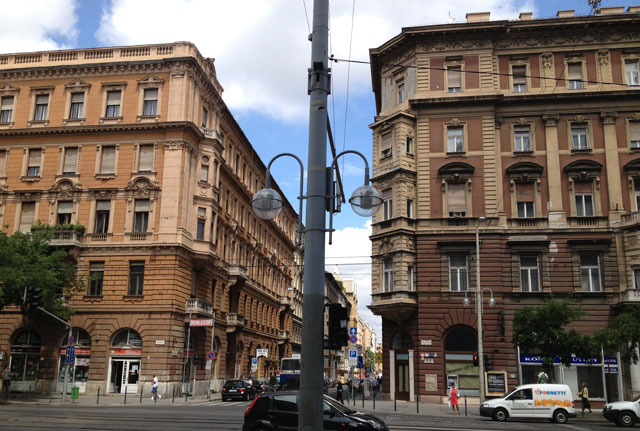 Our first view of Budapest

We decide to have lunch in the meantime. Jean Michel is very pessimistic but I try to stay calm and be as nice to L as I can be. It isn’t his fault, after all! He soon returns with bad news. Even if he pays the electricity bill in cash, the electricity company will not put the power back on unless the owner of the apartment is present. L’s father has an official proxy but he doesn’t and A. is in the US. We’re in Hungary, he says.

Jean Michel wants to get out of Budapest as soon as he can. He looks up the Routard and finds an appartment to rent in Esztergon, a small town on the Danube an hour’s drive away, where we will be able to do our washing*. I have a look but am not convinced. I suggest Szentendre which is closer to Budapest and seems more promising but no apartments are listed. Jean Michel is adament, particularly after he discovers he has left his photo-grey sunglasses behind in the appartment. 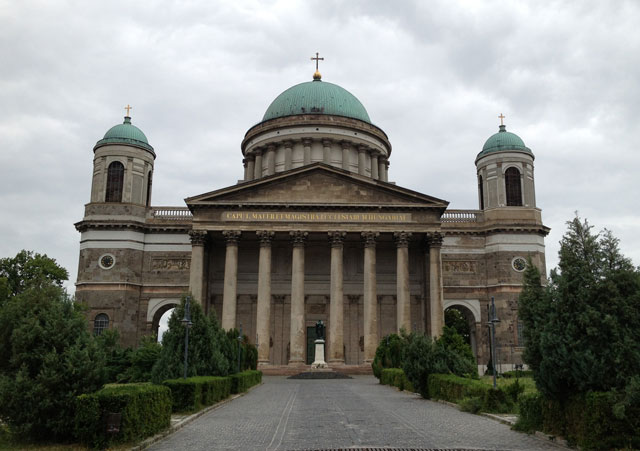 Primatial Basilica of the Blessed Virgin Mary in Esztergon

About a half an hour out of town, we enter a forest and the road starts winding up a small mountain. We finally come down the other side and into the very dismal little town of Esztergon. We pull up at the address in the Routard and I have another look at the description. I quote, “We don’t know why anyone would possibly want to stay in Esztergon, but if you do, here are a few addresses.” Jean Michel had not read that bit.

I start laughing and Jean Michel at last joins me. We park the car near Hungary’s biggest building, the Primatial Basilica of the Blessed Virgin Mary, so we can visit it before going to Szentendre. It is certainly huge but not particularly attractive. 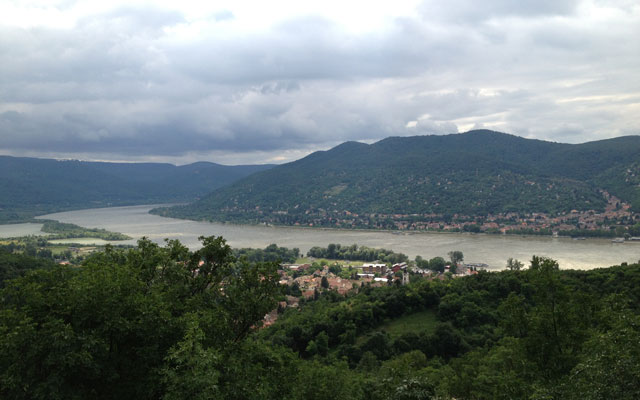 We drive along the Danube to Szentendre, stopping off on the way at Visigrad and driving up a hill behind it from which there is a breathtaking view of the Danube. 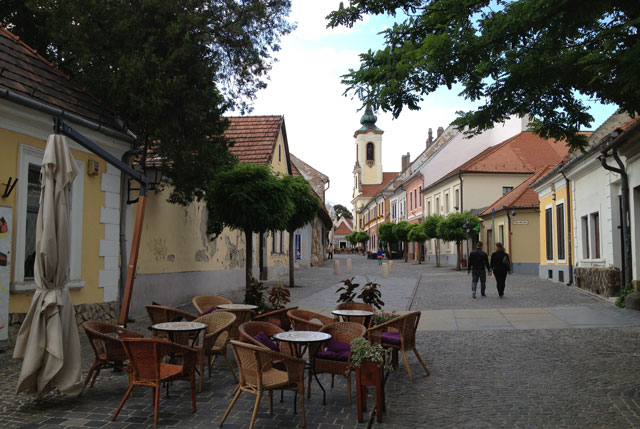 The main pedestrian street in Szentender

Szentendre turns out to be a pretty little town with a pedestrian area in the middle and no fewer than five churches. After calling in at the tourist office for local bike maps just before it closes, we go to Roz Panzio the first of two hotels listed in the Routard under the prix moyens et plus chics category. We are shown two rooms and choose the largest. Then I ask about washing. The lady takes us to the hotel laundry, then phones someone on her cell. “No, I’m sorry”, she says, “not possible”. 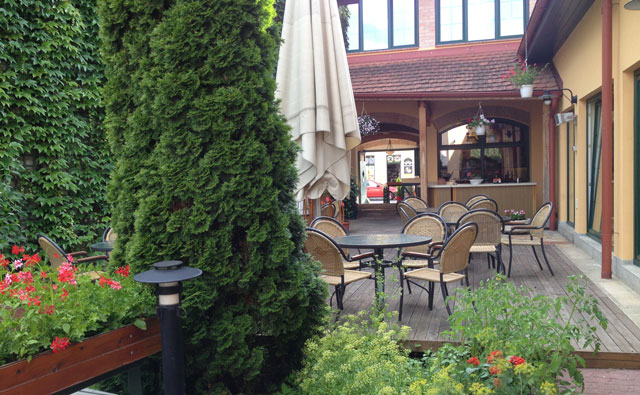 The terrace at Mathias Rex Panzio

We try the second address, Mathias Rex Panzio, which I actually prefer. Yes, there’s a double room for 50 euros including breakfast. Wifi? Yes. Parking? Yes. Washing? No. So I explain about the apartment falling through and our 10 days’ washing. “OK”, she says. “You can use our private washing machine.” I thank her profusely. The room isn’t very big, but it’s clean, it has a comfortable bed and a very interesting bathroom, that appears to be all moulded in one piece. We take it. Dinner? At Movies (actually Muvesz) down the road. 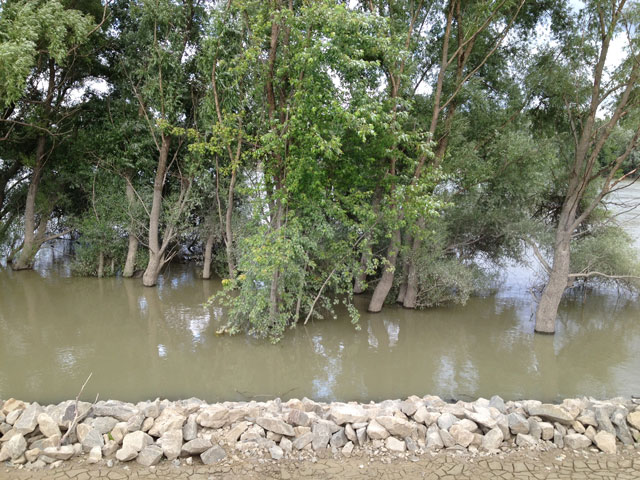 Aftermath of flooding of the Danube

We change, take the bikes off the back of the car and off we go. It’s amazing how quickly the annoyances of the day disappear. From the height of the water in the Danube, we are lucky to be cycling at all. The whole area was obviously badly flooded. 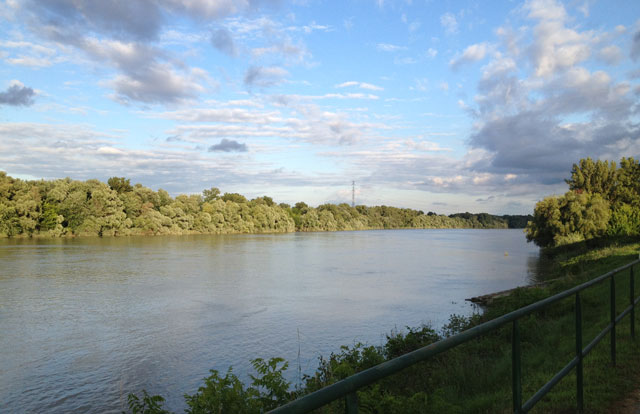 The Danube at sunset

Muvesz turns out to be an excellent address and for the equivalent of 30 euros for the two of us, we have two courses and a glass of red and white wine each. Tomorrow, we’ll visit Budapest.

*We have been unable to find a laundromat in either Germany or Austria despite a lot of time spent following up non-existent addresses.
Mathias Rex Panzio, Kossuth Lajos utca 16, Szentendre 2000, Hungary. www.mathiasrexhotel.hu info@mathiasrexhotel.hu