An Aussie in France at Berges de la Seine

We’re back in Paris with our heads to the grindstone but it promises to be a lovely evening so we have an early dinner at home (very light – it’s a fast day) and set off through the Palais Royal gardens for the new Berges de la Seine area which Jean Michel hasn’t seen yet. 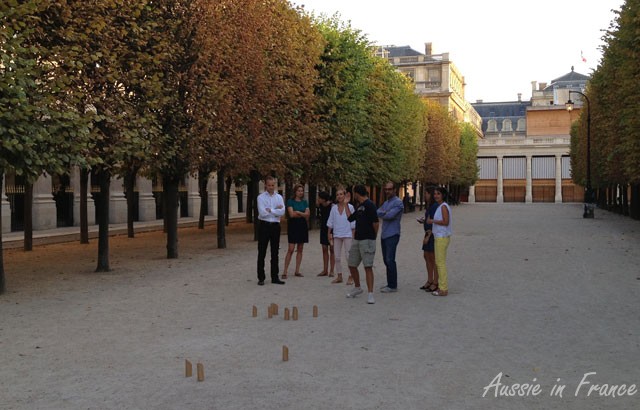 People in the Palais Royal Gardens playing an unknown game

Berge, which has the same origin as “verge” in English, actually means a natural river bank in areas where there are no embankments, but has come to be used in Paris to mean the embankment along the Seine. Up until recently, the berges on both sides of the river were used as an expressway but on 19th June this year, 2.3 km along the left bank between the Orsay Museum and Alma Bridge were officially closed to traffic. 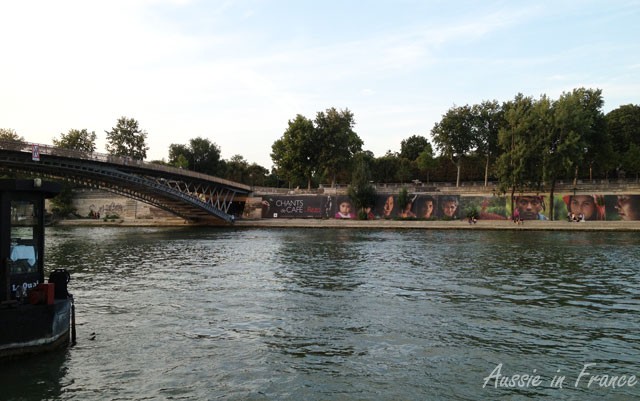 Photo exhibition along the Seine

Les Berges de la Seine are now dedicated to pedestrians and cyclists, with various sporting and cultural installations, river boats and barges, picnic areas, restaurants, bars and gardens along the promenade. And they are packed with people of every age. 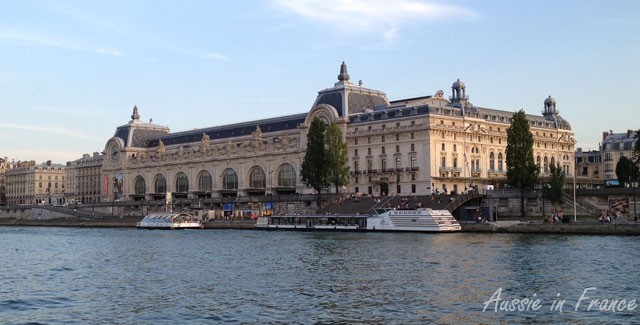 Our first stop, after walking across the Solferino footbridge between the Tuileries Gardens and the Orsay Museum, is an enormous green world map. The first time I came, I had Mary Kay from Out and About in Paris take a photo of me standing in Australia. 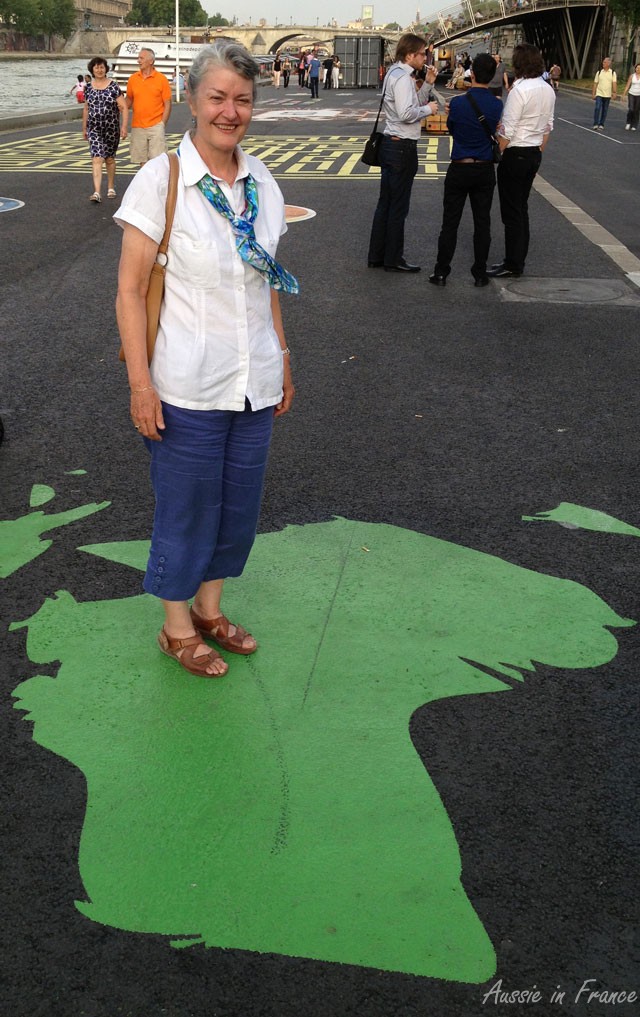 An Aussie in Australia

This time, I want to be an Aussie in France. Jean Michel has to take fourteen photos before I’m satisfied. I may have difficulty making my final choice. 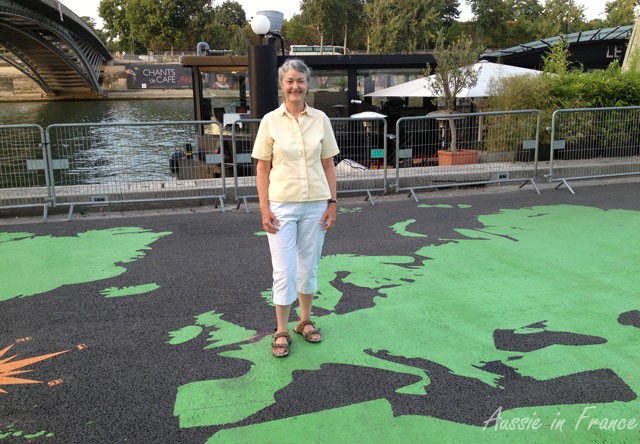 An Aussie in France

I love the way they’ve used salvaged beams and containers for the installations. Jean Michel is disappointed though. He says it looks cheapskate. But the people using them as picnic tables and seating obviously don’t care. It’s so much more comfortable than sitting on the ground and they can accommodate far more people than a few picnic tables would. 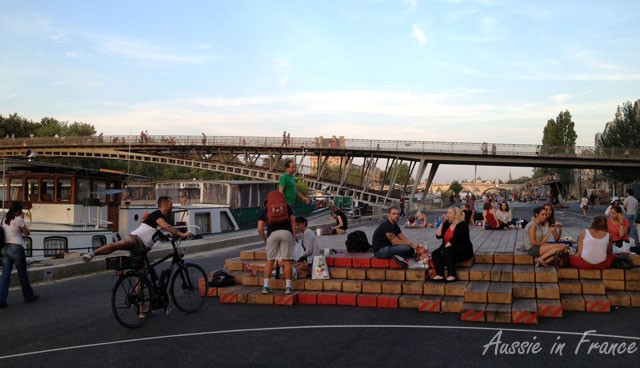 The grey containers can be reserved, free of charge, by the hour, as a place to relax or work in. Quite a few have an Occupé sign but we can’t see anyone inside. 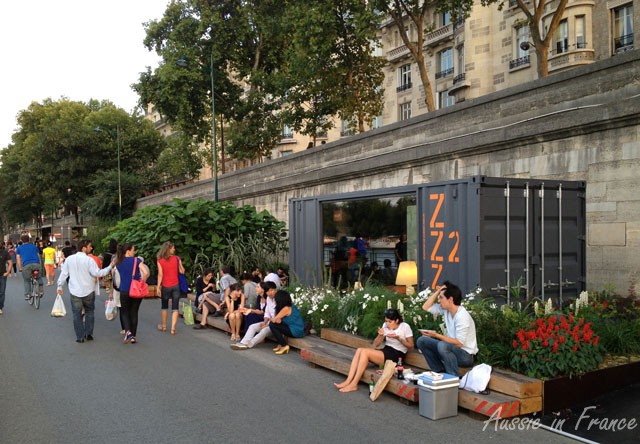 A container that you can book to relax or work in

I note that there are public toilets, but I don’t check them out. No one seems to be queuing though so perhaps there are enough for once. I don’t understand the lack of toilets in this country. Often in a restaurant you find yourself standing in line because there is only one and it has to be shared by men and women. 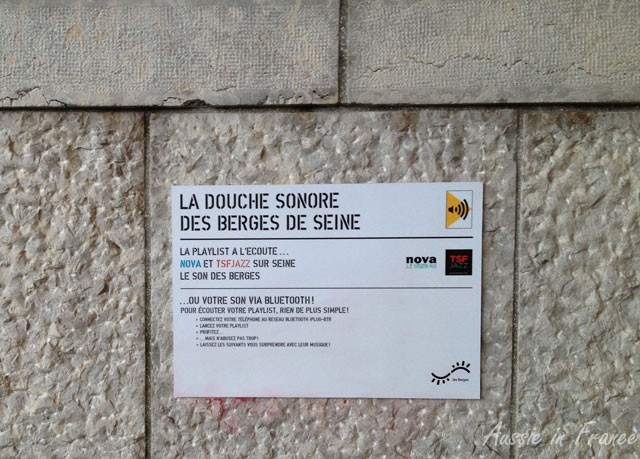 Further along, under Pont de la Concorde, there is a “sound shower” to connect your mp3 or smart phone via Bluetooth and fill the vault with your own music. It doesn’t seem to have caught on though because the only sound is the humming of human voices and the lapping of the waves as the tourist boats go by. 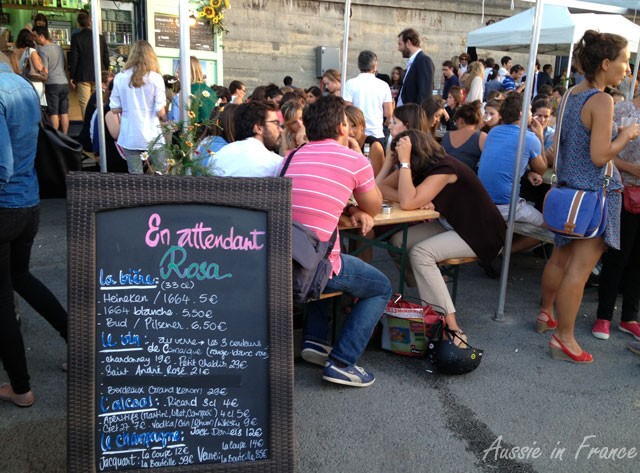 We walk past the main eating area where containers have been converted into kitchens and bars and see there’s a long queue in front of En attendant Rosa (While Waiting for Rosa). There’s no distinction in the seating between people buying from the stalls and those who have brought their own picnic. 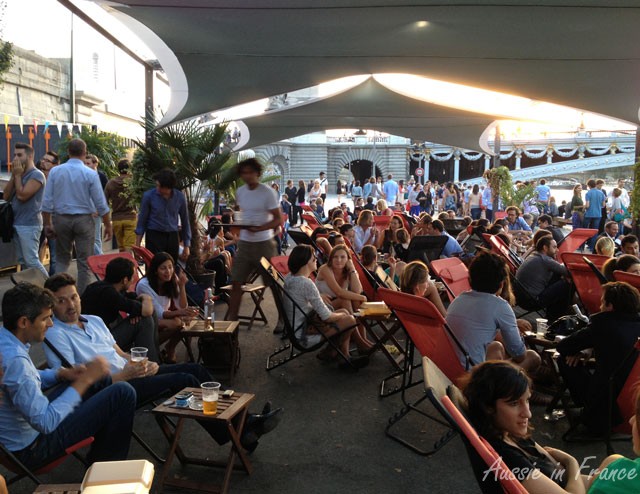 Deck chairs on the Berges

I like the covered deck chair area but it’s chockablock as well. 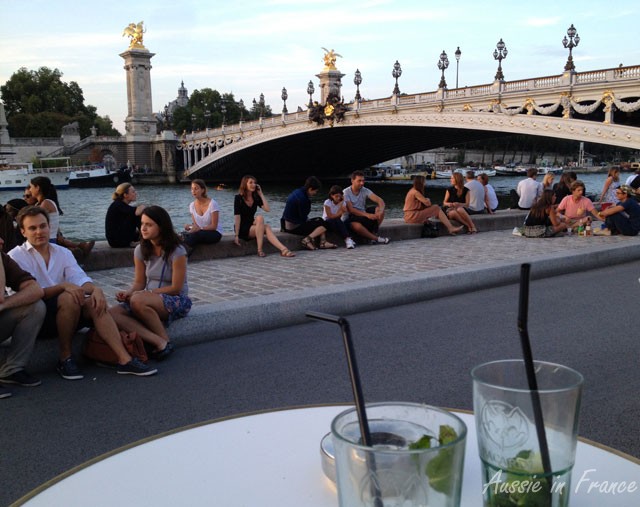 We come out on the other side of the beautiful Alexandre III bridge and spy the last table at Faust’s. We sip our Coca Zero (remember, it’s a fast day) and watch the sun set peacefully over the Seine. 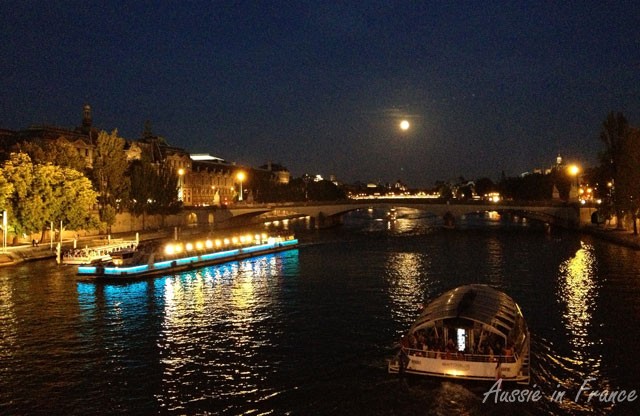 Full moon over the Seine on the way home

“I’m going to buy one of those flat-bottomed boats so we can glide along the Loire after dinner”, says Jean Michel as we’re walking home with an enormous full moon in front of us. “I’ll make sure it’s big enough for you to have a deck chair so you’ll be comfortable.” I love my husband.