When kids start to learn a foreign language, the first thing they do is to find out how to say all the four (or five) letter words they know. They’re called gros mots or coarse words in French.

I never say “shit” in English but I do occasionally say merde because for some unknown reason it isn’t nearly as vulgar in French as it is in English. I guess that explains the English expression “excuse/pardon my French”.

The equivalent of “sugar” is mercredi (Wednesday) and a softer variant is merdum with the emphasis on the last syllable. 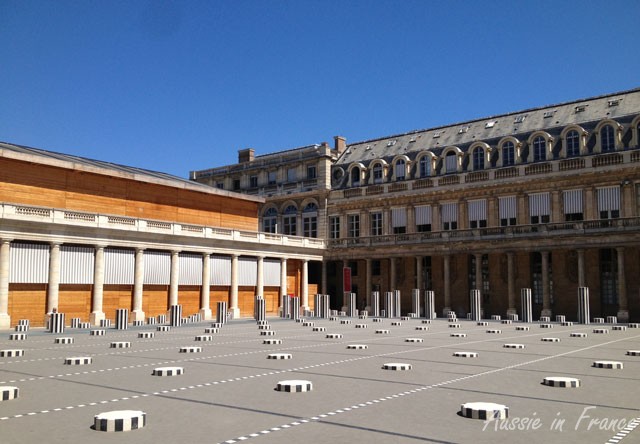 Buren columns with the temporary Comédie Française theatre on the left

But that isn’t actually the subject of this post. Merde is what you say to an actor or singer before a performance pour conjurer le sort, just as we say “break a leg” because wishing someone good luck might bring exactly the opposite.

It seems that the use of merde in French comes from the time when people drew up in front of the theatre in horse-drawn carriages, thus littering the pavement with horse dung. Since the amount deposited was directly proportional to the number of people attending the play, it was the done thing to wish the actors beaucoup de merdes.

And while we’re on the subject of superstition and actors, you can give an actress roses but never carnations. It seems that when actors were employed permanently, the director used to give a bouquet of roses to the actresses whose contracts were renewed but only cheaper carnations to the others.

You’re not supposed to whistle on stage or in the wings either as it could bring bad luck. There are two possible explanations for this. Back in the old days, stage hands used to whistle instructions to each other when changing scenery which meant that if the actors started whistling too, it could create confusion.  Or it could come from the time when gas lighting was used in the theatre. If the pilot light went out when the lights were dimmed, gas could escape causing an explosion. The escaping gas made a characteristic whistling sound which could be overridden by any other kind of whistling.

Another word you can’t use is corde (rope) which is replaced by guinde. Depending on the time and place, saying corde was considered “fatal” and could lead to death while in others, you had to buy drinks for everyone within hearing distance. It seems it’s a navy superstition where a rope is considered to be an instrument of torture. The only corde present in a theatre is a corde à piano which has nothing to do with music but is made of steel and used to open and close the curtain.

Which brings me to rideau which is the normal term for curtain and is prohibited in the theatre because it’s supposed to bring bad luck. Pendrillon is used instead or the more recent term taps. I don’t know why.

The colour green is considered bad luck too, except for clowns. There are several explanations here: green was not an attractive colour under 19th century lighting; the copper or cyanide oxide used to dye clothing is poisonous; and Molière, one of France’s most famous actors/playwrights, was wearing green at his last performance at the Comédie Française before he died.

Thank you, French Wikipedia, for all these little tidbits.