Pickpockets on the train from Charles de Gaulle Airport

Posted on September 30, 2013 by Rosemary Kneipp

We’re on our way back from Sofia. A couple of people asked us whether we had any safety issues in Bulgaria but we didn’t. Apart from an insistent beggar in Plovdiv, we always felt perfectly safe, even walking through deserted streets at night (except for the pavements which are treacherous). 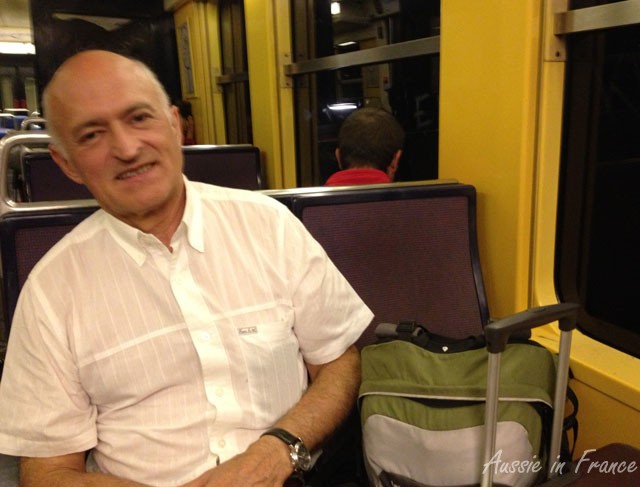 Jean Michel in the train with his backpack and the handle of the roll-on.

We have a large suitcase, a smaller roll-on bag, a backpack and a handbag (which I don’t usually carry when I travel but it’s easier than putting it in my roll-on). We’re sitting in the RER train that goes from Charles de Gaulle Airport to Châtelet-les-Halles in the city centre. We are sitting in the aisle opposite each other. I have the handbag on my lap with my hands on it. My iPhone is in the zipper closest to my lap because I’ve had that stolen before. The suitcase is on the floor near the window with the roll-on on top of it. The backpack is on the seat next to Jean Michel. His wallet, etc. are in his shirt flap-pocket. My wallet is in my bag.

Jean Michel then does something stupid (his admission). As we’re nearly home, he removes a little purse from the backpack and takes out his keys. He puts the now empty purse back into the backpack.

The train stops and a young man drops some coins on the floor next to us. While the door is still open, he bends down to pick them up. He indicates that one has gone under Jean Michel’s seat. Instinctively clutching my handbag (at least I’ve acquired that reflex at last!), I’m looking for the coin.

Suddenly, I see Jean Michel’s hand reach out to clutch another man’s sleeve next to us and then see his backpack on the floor. Both of the men dash out of the train just as the door closes.

Somewhat shaken, I ask Jean Michel what happened. The second man came from behind him and plucked the backpack from the seat. He then made the error (for him, not us!) of trying to leave the train from the door in front of Jean Michel. Had he left from the door behind, in the next wagon, he would have got away with it. Jean Michel immediately realised what was happening and grabbed his sleeve. The man was forced to let go and run for the door.

These are not organised professionals, in our opinion, just petty thieves used to working together whence the exit mistake.

The carriage is buzzing. Everyone is astounded but, you may be sure, not one of them would have tried to stop the thieves.

The moral is this: watch your belongings at all times. Make sure you don’t have too many bits of luggage. You can use a ribbon or shoelace or something to tie your luggage together until it’s time to get out the train. Don’t be silly enough to remove a purse from your backpack or bag in public transport.

AND DON’T BE FOOLED BY PEOPLE DROPPING COINS ON THE FLOOR!!!

N.B. Do read the comments to this post – there are other scams to be aware of too.