Feeling more at home in Sofia

Posted on September 25, 2013 by Rosemary Kneipp

The sky is a stunning blue although the temperatures have dropped a little. We go directly to the imposing church of St Nedelya, just across from the statue of Sofia and the little church of St Petka, with the School of Theology in the background. As we approach it, we see a lot of activity under white tents. It turns out to be a book fair. We notice there are very few book stores but lots of book markets. 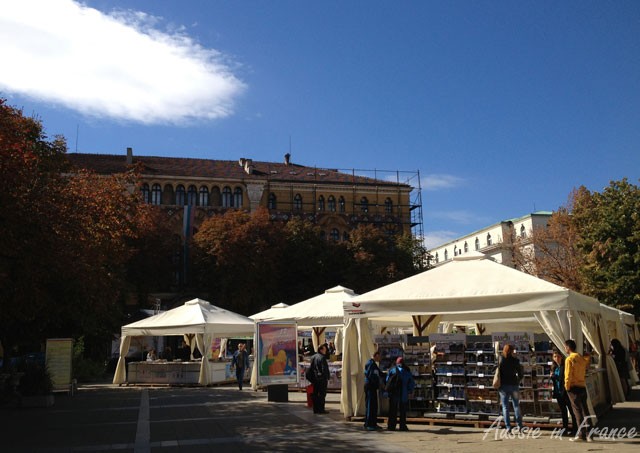 St Nedelya, or Holy Sunday, is a mediaeval Eastern Orthodox Church that has been destroyed and reconstructed many times throughout the ages. It was razed in an assault in 1925 that claimed over 150 victims. The tzar, Boris III, who should have been the main victim, escaped because he turned up late, a typical Bulgarian trait so I am told later by a Bulgarian. It was restored between 1927 and its inauguration in 1933. What a chequered existence! 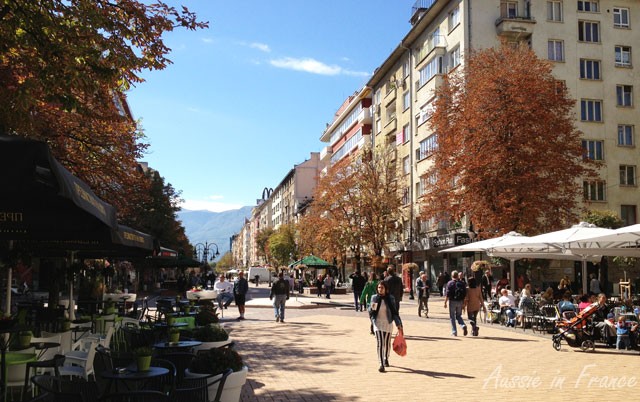 Vitosha Boulevard with Vitosha Mountain in the background

If you look straight ahead as you come out the church, you will see Vitosha mountain in the distance. Vitosha Boulevard is Sofia’s most expensive shopping street. The population is dressed very differently and there are lots of French and other foreign stores but they are hardly big names: Adidas, Promod, Le Coq Sportif, etc. 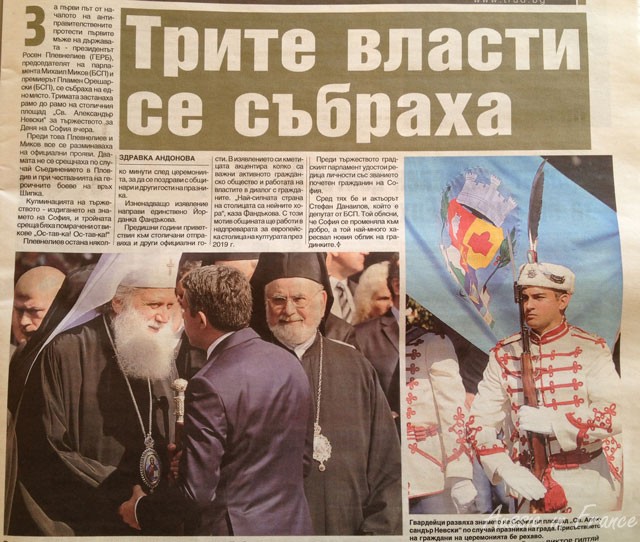 What we like are all the sidewalk cafés with the mountain as a backdrop, though they are twice the price of the others we’ve been to, but still much cheaper than Paris. We pay 4 lev for 2 espressos at Vitosha Street Café. We take a look at the local paper and I see a report on yesterday’s festivities but unfortunately I can’t read it. 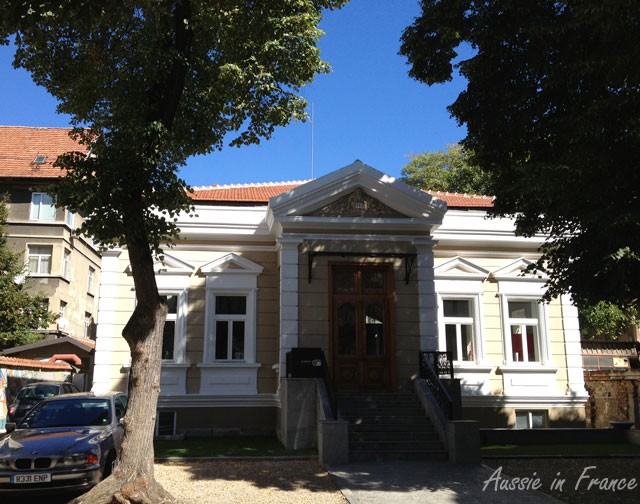 We then head in the direction of Eagles’ Bridge, wandering through a much more upmarket area than our own neighbourhood. Ultra-modern buildings juxtapose renovated 19th century mansions. 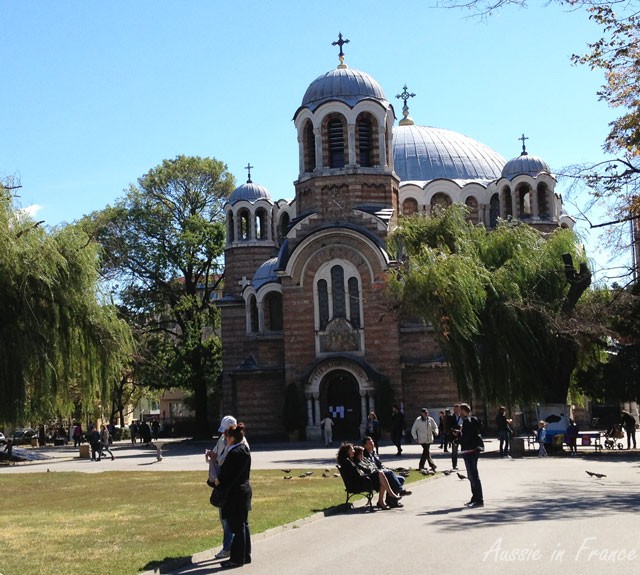 Sveti Sedmochislenitsi, initially the Black Mosque built in 1528 but completely restructured in 1901 to 1903. It once included a Turkish school for priests, a caravanserai and a bath which were temporarily used as a prison before being destroyed around 1929.

Yet another church, Sveti Sedmochislenitsi, and another market appear as we get closer to the university where we intend to find a sunny bench in a nearby park to have lunch (it’s an intermittent fast day for us) because the weather has become surprisingly chilly. 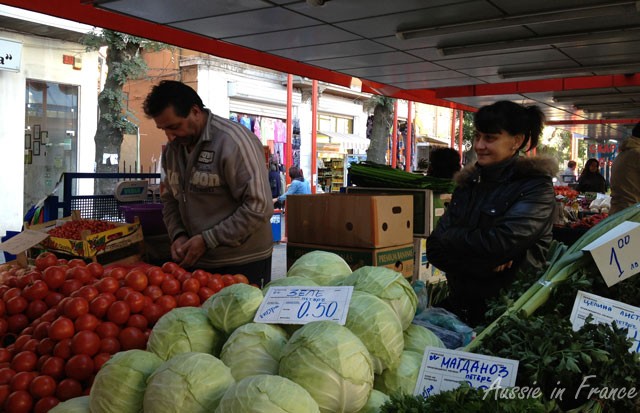 Ladies’ market where two vendors shall a stall, each selling two types of vegetables.

We’ve been back to the Ladies’ market to buy the day’s vegetables – 4 tomatoes, 1 eggplant, 1 zucchini, 1 capsicum, 1 cucumber and a couple of handfuls of green beans, all for an amazing 2 lev. White and black grapes are 1.20 lev a kilo. That’s about 60 euro cents. 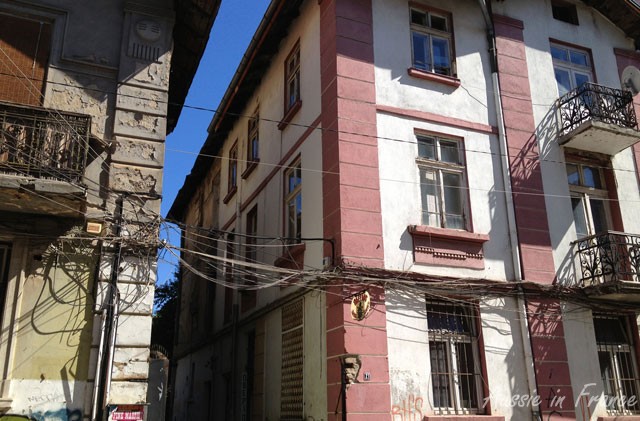 Overhead wiring that doesn’t seem to obey any safety rules

Jean Michel stops to admire the external wiring on some of the houses. 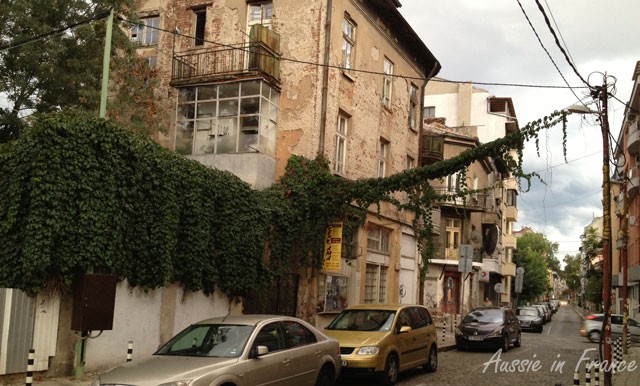 Vegetation-covered wiring in our neighbourhood

Not nearly as good as the ivy-covered cables I saw last night on our way to dinner though! 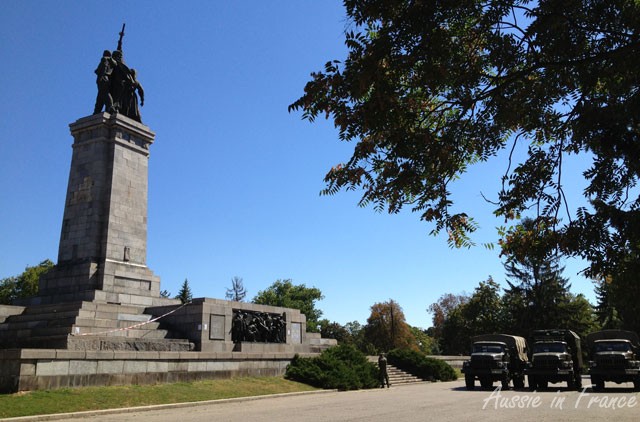 We sit next to the Soviet Army monument and are surprised to see several army vehicles on one side and canons on the other. I learn afterwards that the monument is used as a place of artistic expression e.g. in 2011, it was painted overnight by unknown artists who dressed the soldiers as American comic heros such as Superman, Joker, Santa Claus and Wonder Woman with the caption (in Bulgarian) Abreast of the Times. 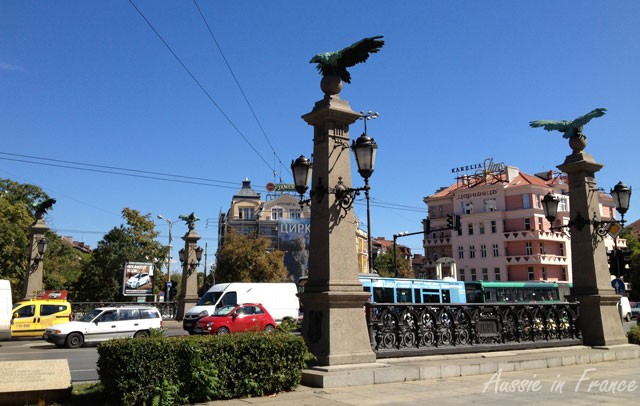 After lunch we go to Eagles’ Bridge (Orlov Most), spanning another tiny sliver of water – the Perlovska River. The bridge was built in 1891 by the same Czech architect as Lions’ Bridge. The four bronze eagles symbolise the citizens of Sofia returning from exile and being welcomed by their families. The bridge itself stands at an important crossroads in Sofia. 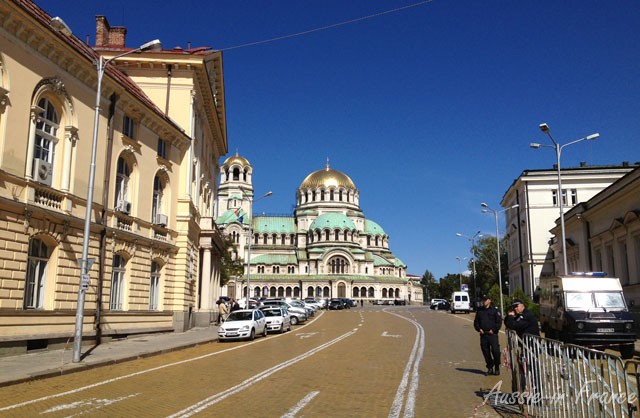 Street leading to Nevski Cathedral cordoned off by police

Our route then takes us past Nevski Cathedral which is completely cordoned off by police. Good thing we visited it yesterday. We have no idea what’s going on of course. Then we see a cavalcade of motorbikes approaching from the other direction. They don’t even take the street that’s been blocked off. Ah, if only we could communicate. 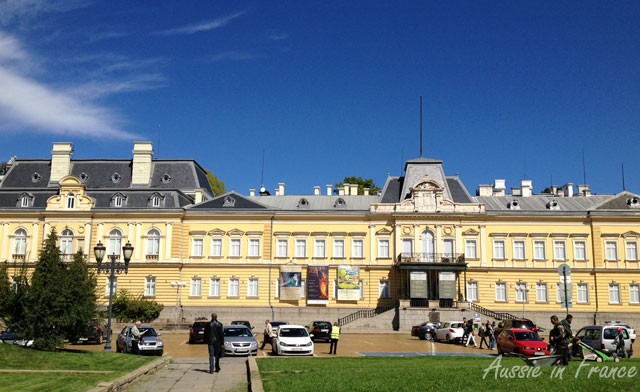 We reach the National Art Gallery, which also contains the Ethnographic museum that I’m very keen to visit. The lady at the ticket office asks if we’re seniors and gives us cheap tickets (3 lev each). This is the first time I’ve been given a reduction for being a senior. Not sure how I feel … 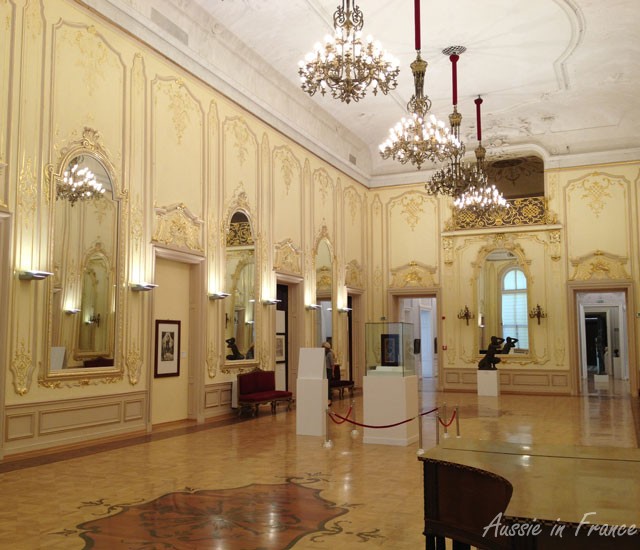 I’m disappointed to discover the Ethnographic Museum is closed for renovation but some of the rooms, particularly the ballroom, are well worth the visit. 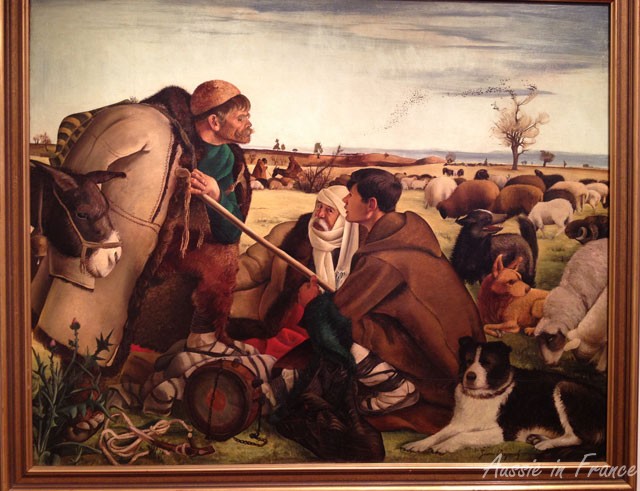 I also enjoy some of the more traditional 19th and 20th century Bulgarian artists, especially Vladimir Rilski, Vassil Stoilov and Zlatyu Boyadzhiev with their wonderful depiction of Hungarian rural life. 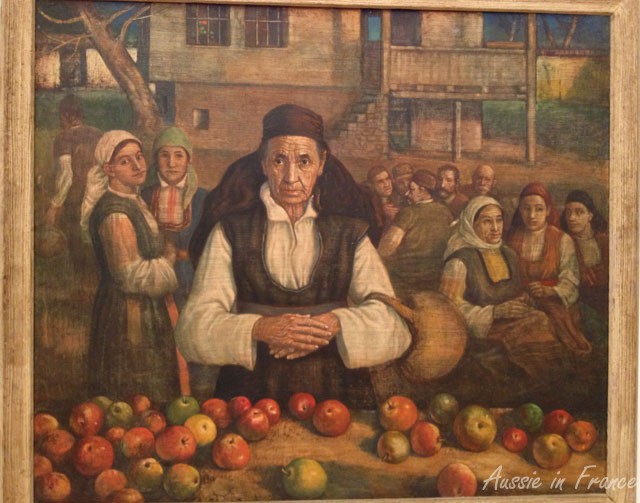 We walk back to our home exchange apartment and don’t seem to notice the poverty as much. I guess we’re getting used to it! Sofia seems to be one of those places that grows on you.

13 Responses to Feeling more at home in Sofia