A Vide-grenier from the inside

Posted on October 9, 2013 by Rosemary Kneipp

It’s not the first time Black Cat and I have participated in a vide-grenier. Living in an appartment with no cellar meant we needed to regularly get rid of toys and clothes and the local town hall had a free garage sale for kids once a year. After that, we shared stalls with friends until Black Cat was old enough to branch out on her own.

With our move to Blois scheduled for 30 September 2014 and Black Cat actively looking for work in New York, we have taken a stall at the yearly vide-grenier in nearby Rue Colonel Driant. We’re up early and at 8.15 am we’re handing in our documents (ID and electricity bill to prove we are locals) and paying 15 euro in exchange for 2 metres of pavement space. I go and get the car which Jean Michel has filled up the day before and park it temporarily in front of stand n°65 while we unload. 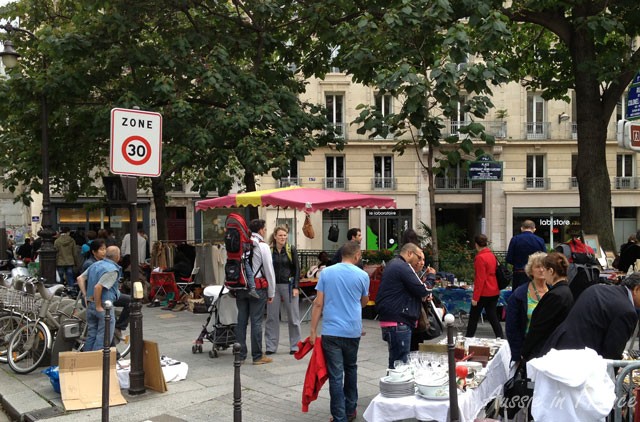 We set up a trestle table and Black Cat starts putting the clothes rack together. As we unpack, the early scavengers arrive, mainly looking for jewellery. By the time we have everything out of the cartons, it’s 9 am and we’ve already made a couple of sales. We also make the acquaintance of our neighbours. 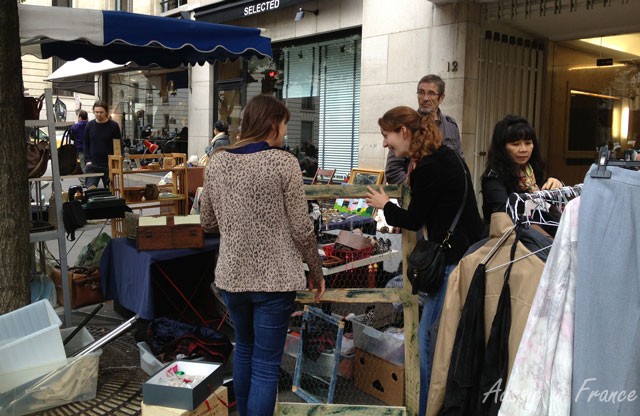 Checking out the neighbours’ stall

On the left is a Ukranian girl and her French friend. It’s their first vide-grenier but, apart from the fact that their two clothes racks topple over at regular intervals, they seem to have their act together. They have a mirror which we don’t have but they lend it to us whenever we need one. They seem to be having a whale of a time. Everytime I look over they seem to be dressed differently! 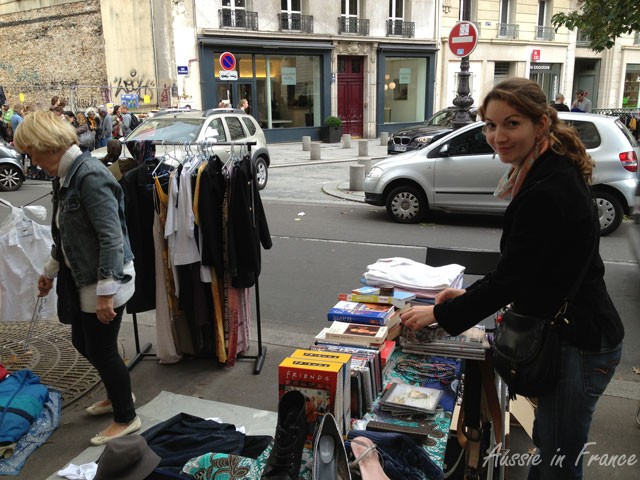 Tidying up the stall

The lady on the left is a regular. She has a small stock of women’s clothes that she has brought in a suitcase, including a rack that regularly falls over with the wind as well. She also has two plastic sheets that she spreads on the ground to display anoraks and jackets. She explains later in the day that she buys summer dresses cheaply on cheaper markets and sells them on the more expensive ones. 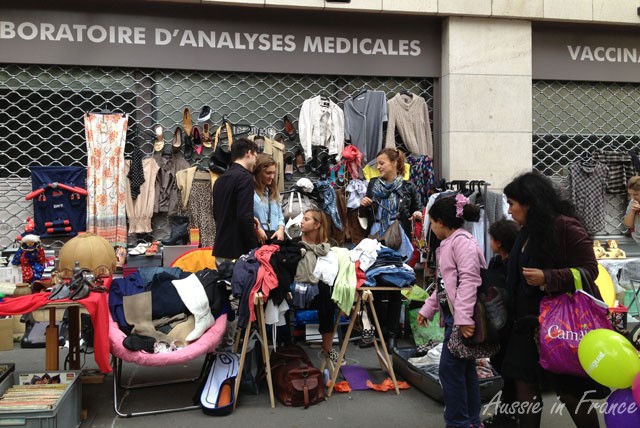 Clever use of grating to hang up clothes and shoes

I’ve brought along two folding chairs because I know I can’t stand up all day. We can’t possibly display everything we have on the clothes rack and table so we work out a new arrangement. We put the table on one side and the rack on the other so that people can enter the stand and also look through our cartons which we’ve divided into tops, skirts, dresses and pants. 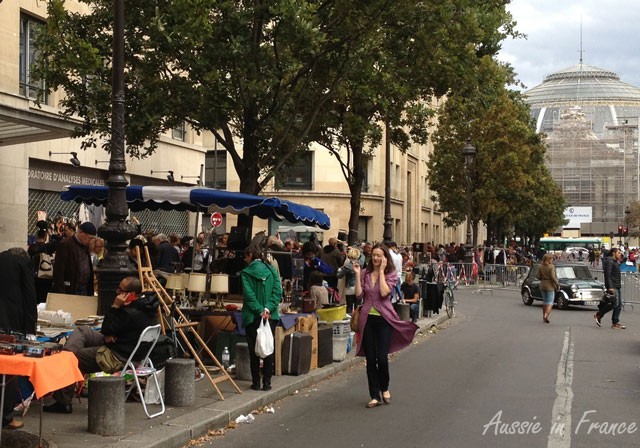 Business is steady. Black Cat’s fairly large collection of DVDs, a handful of CDs and my books are the most popular initially. At 2 euro for a DVD and 1 euro for a book, you’d think it was a bargain but there are still people who want to bring the price down. We’re selling the clothes at 2 euro for a top or skirt, 3 euro for a dress and 5 to 10 euro for jackets and coats. 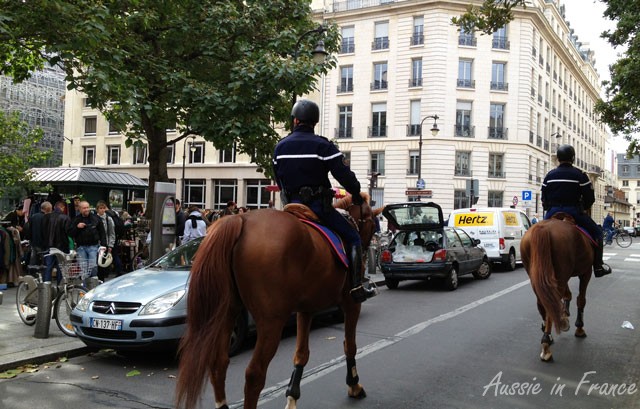 A little visit from the mounted police

Late morning, I go back home and make a large thermos of tea which I bring back and share with our neighbours who are delighted. “Oh, but I don’t have anything to offer you”, says the Ukrainian. “That’s OK. We’re using your mirror.” But when I bring the second thermos around 4 pm, she has acquired some biscuits to share. 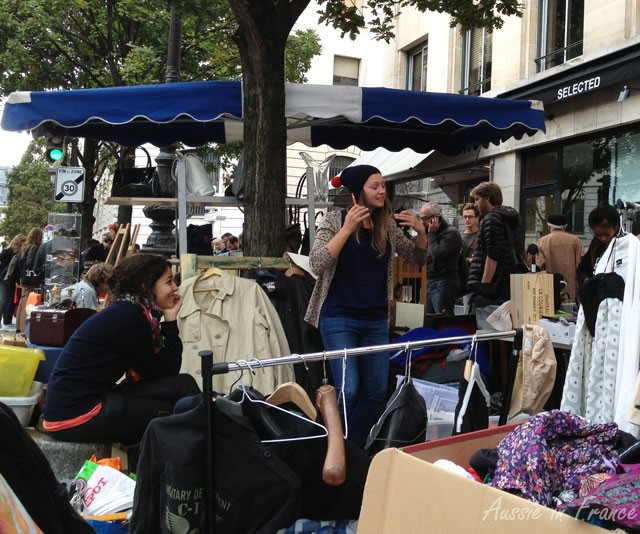 During the day, at least three English speakers, hearing me chatting with Black Cat, come up and ask for directions!

Most of the people are friendly which is not true of all street markets. I tell someone that Black Cat has made some of the clothes herself. Those items are snapped up as unique pieces. One young woman makes us laugh as she wiggles into a skirt then removes her own from underneath so she can check if it fits properly. 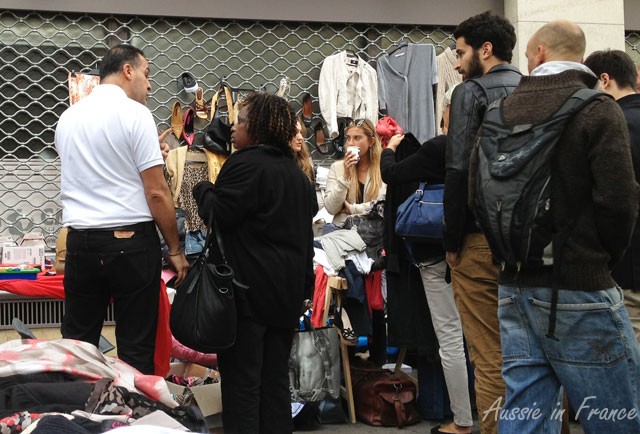 There’s a big fight at the stall opposite at one stage when a woman claims that she hasn’t had her money’s worth. It looks as though they might come to blows but she finally walks away. 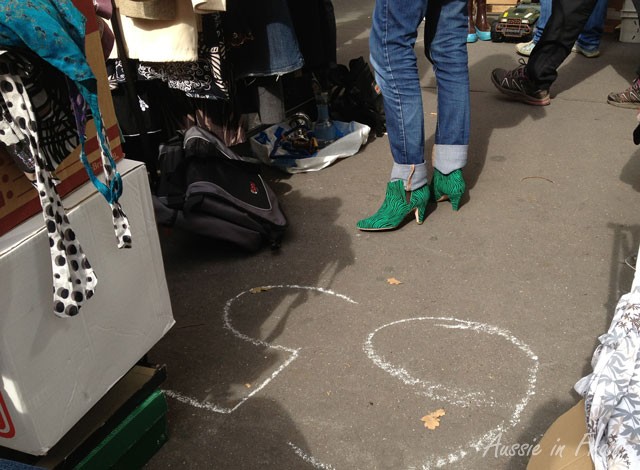 Some interesting shoes at n° 65

At about 6 pm, business picks up and we bring the prices down even further. I tell my neighbours they can take what they want because they are all doing another vide-grenier next day. Then it starts to spit and we all have to start packing up before everything gets wet. 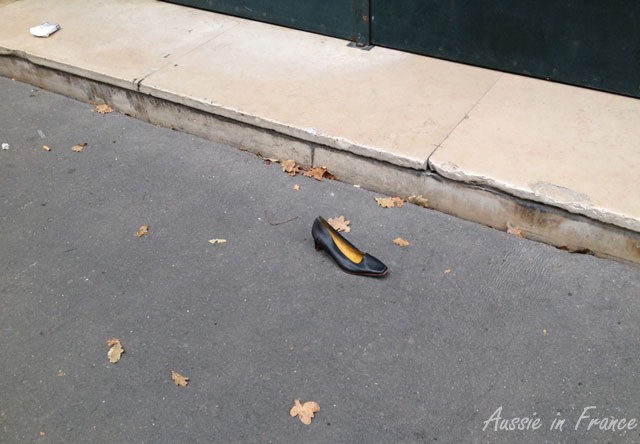 The leftover shoe next morning

Jean Michel turns up with the car and we bundle it all in. I take everything to La Ressourcerie at 62 rue Oberkampf because there’s no way we can store any of it. Black Cat is very pleased with her takings and I have had a most enjoyable day with my daughter!

This entry was posted in Lifestyle, Paris and tagged vide-grenier. Bookmark the permalink.

2 Responses to A Vide-grenier from the inside