We’re very worried. Our guests have been telling us about large bees in the kitchen at Closerie Falaiseau that appear to be coming from the inside. When we arrive, the first thing I do is look for the bees. There are several dead insects in the  birdbath but I can see instantly that they are not bees or wasps but hornets! Thank goodness no one got stung. 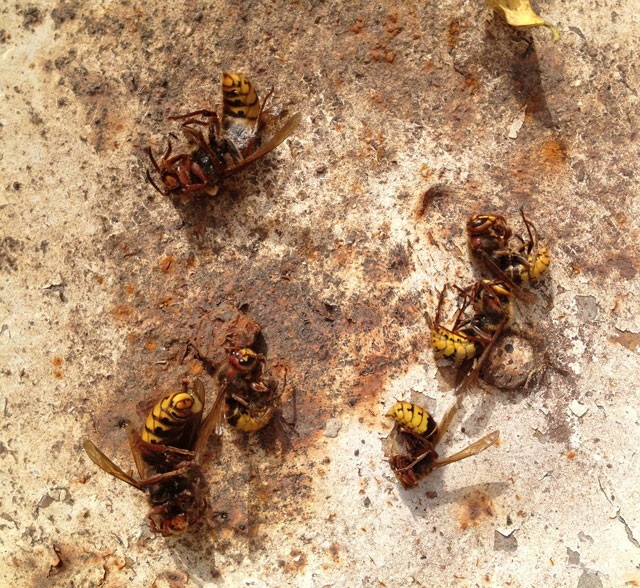 The dead hornets in the bird bath

When Jean Michel cleaned the bedroom fireplace when we first bought the Closerie, he discovered an enormous, fortunately empty, hornets’ nest, so he immediately assumes that the hornets must be in the kitchen chimney. Sure enough, we can see a lot of activity around the top of the chimney stack. 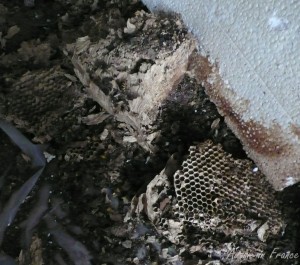 But the fireplace in question is completely closed off with a board at mantle level. We check it thoroughly and can’t see any way the hornets could possibly be getting from the chimney stack into the kitchen. They must be coming through an open door or windows. 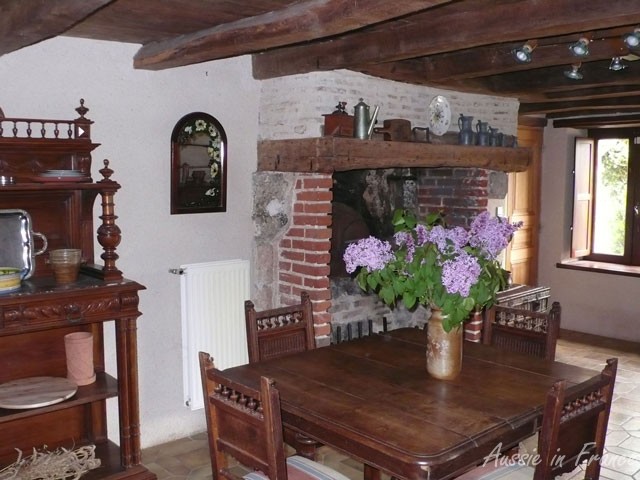 We call the fire brigade who explain that early autumn, especially when it’s mild, is a favourite time for hornets. They tell us we should call a company specialising in désinsectisation. We check out the yellow pages and start searching for someone who can come next day at the latest as we have new guests arriving on Saturday. 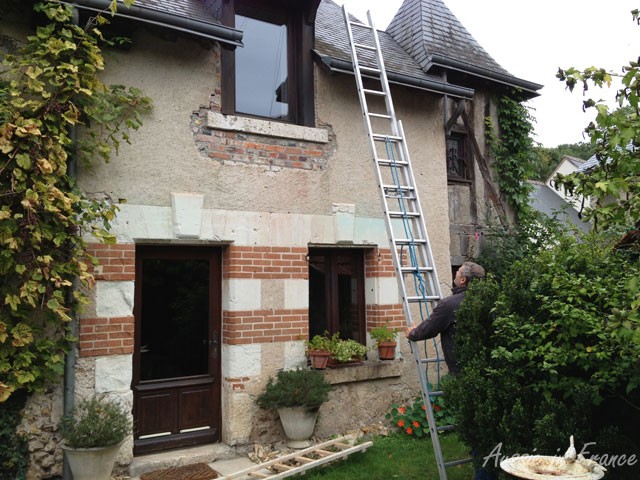 The first ladder in place

After calling several numbers, we get a positive response from Mr B. who turns out to have been born and bred in our neighbourhood in Blois, Les Grouets. He says he can come late afternoon the next day. We’re relieved. 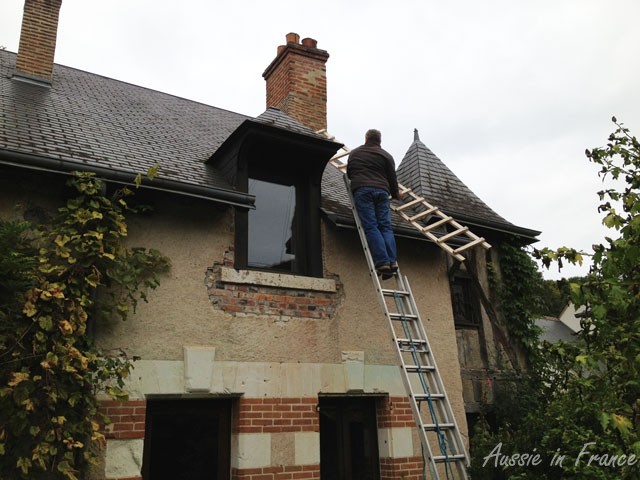 Mr B. taking up the second ladder

He turns up with his van and ladders and starts setting them up. He has a regular alumium telescopic ladder and two wooden ladders to climb across the roof without damaging the slate. He sets up the aluminium ladder then climbs up with one of the wooden ladders in his hand. He places it flat on the roof then puts the second wooden ladder next to it. 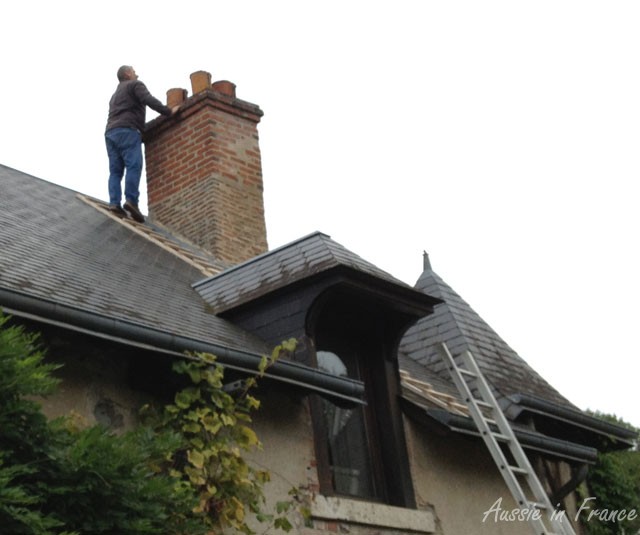 Mr B. checking out the fireplace

After that, he climbs up the first wooden ladder then pulls the second one up so that it is an extension of the first. Now he can get to the chimney. No harness of any sort we notice. He has a look at the chimney and says it has a concrete plug that is somewhat deteriorated and is letting the hornets get in. 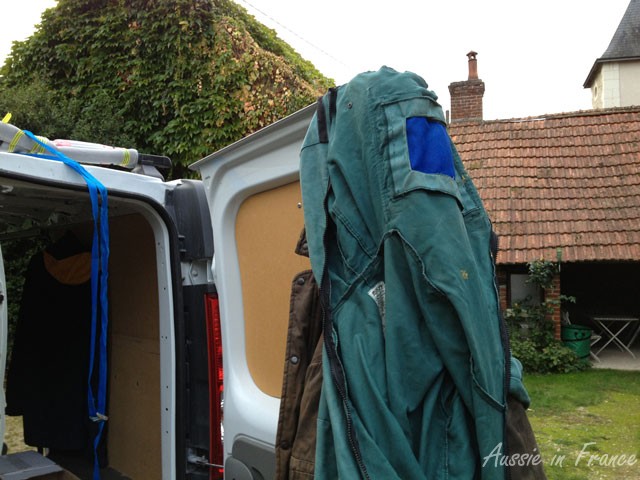 He climbs down. “Yes, a belt would be good”, he says, and gets one from the front seat of his van. I’m wondering what the belt’s for. Maybe to tie the two ladders together ? He then proceeds to thread it through the loops of his jeans ! “That’s better”, he says.  “I have some overalls”, he explains to no one in particular, “with a mask and everything, but once you put them on, you can’t see anything. No much point.” 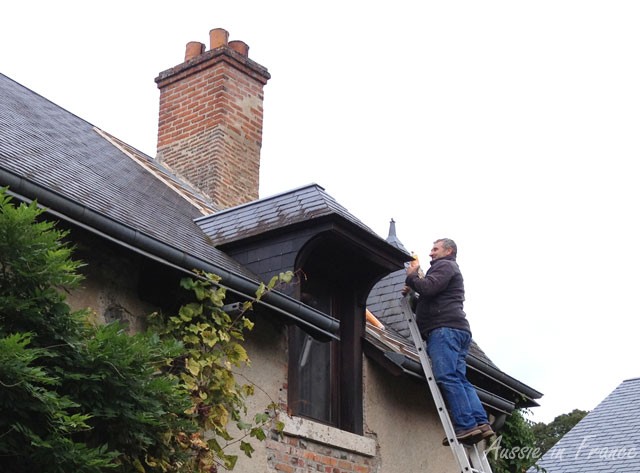 Mr B. taking his spray cans up the ladder

Armed with four large spray cans (two instant insecticides and two softer environment-friendly ones), he climbs back up the ladder and over to the chimney. He starts spraying the hornets that are clustered around the top. I have to confess it seems very amateurish to me. 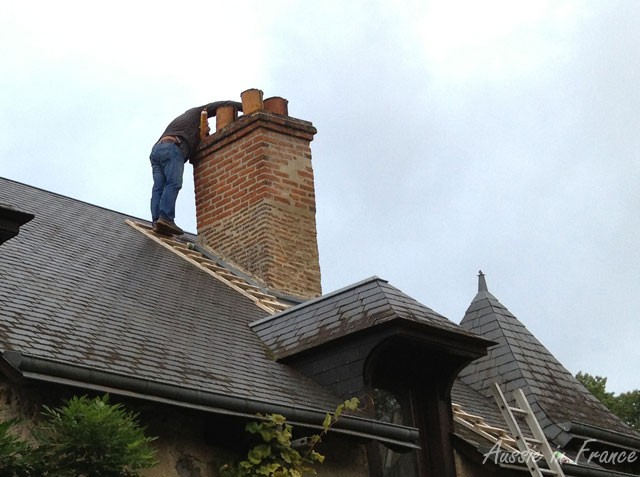 Mr B. spraying inside the chimney

Let me know if you see any coming from behind, he says. So, there we are, standing on the ground, watching out for any hornets that might attack him, and when one comes along, he sprays it. It’s a family business, he explains, handed down from father to son, so I suppose he knows what he’s doing. “I like it up here”, he says. 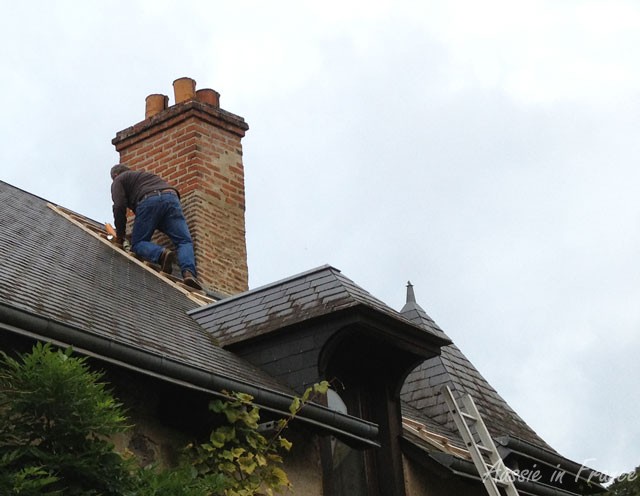 Mr B. climbing up the roof with his second lot of spray cans

He comes down for more ammunition. Jean Michel sees a hornet rapping on the kitchen window. Since everything is clean for our next guests, I volunteer to go and let it out since I can take  my rubber clogs off easily. I walk in and can hear a very loud buzzing noise.  It seems to be coming from above me. 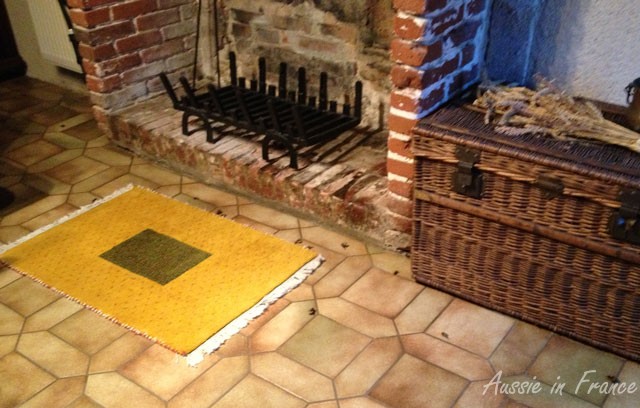 Writhing hornets on the kitchen floor

“Watch out”, says Jean Michel, sounding very alarmed. “Don’t panic”, says Mr B.  And I look down. The floor is covered in writhing hornets. I get a terrible fright and leap out of the way. How on earth did they get in ? 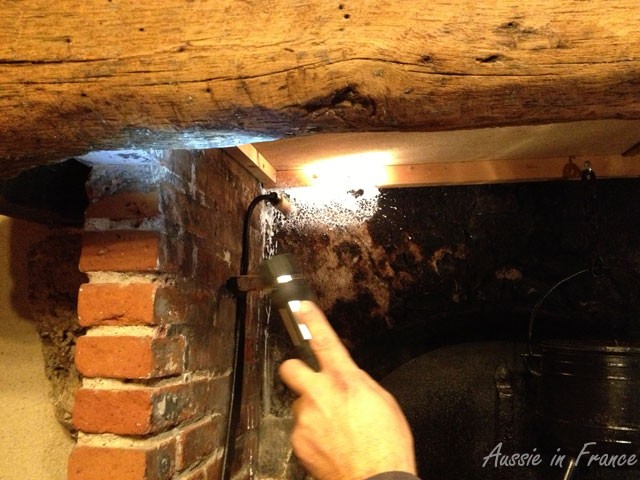 It turns out there is a small space between the wall of the fireplace and the board closing off the chimney. That’s where the hornets are getting out ! Mr B uses his environment-friendly spray to finish off the ones on the floor and his potent spray near the hole they are getting through. 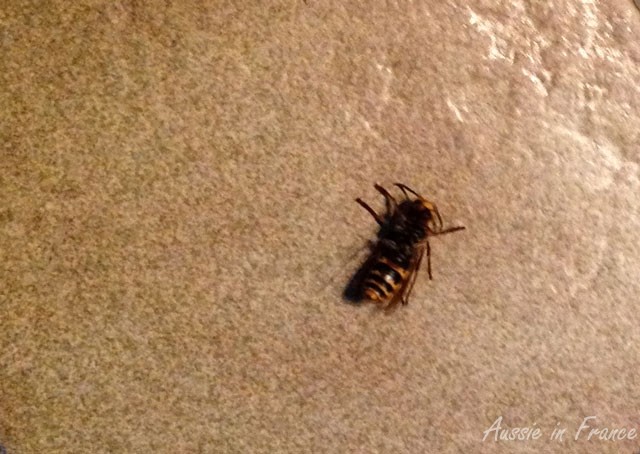 A writhing hornet up close

I get the broom and sweep them all up. Mr B. climbs up his ladder again to get rid of the last few stragglers. We check there are no more in the kitchen and he packs up his gear, promising to come back again next day if there is any more activity. But his sprays have done the trick and the hornets are gone.

3 Responses to The Hornets’ Nest