Posted on November 8, 2013 by Rosemary Kneipp 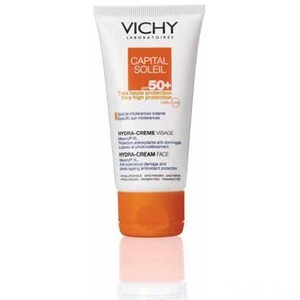 It’s interesting that such a wonderful expression should exist in French and not in English, or at least in Australian English where it would be very useful, given all the sun there compared to what we get in France (it’s a very rainy day today).

Your capital soleil is the amount of sun that your body can be exposed to during your lifetime without causing something disastrous like skin cancer. It’s used very widely in advertising for sunscreens in France. Vichy even has a brand called Capital Soleil.

When I’m translating for cosmetic brands, I usually have to rewrite the sentence completely:

Chaque individu dispose d’un capital soleil déterminé à la naissance becomes “Each person can only absorb so much ultraviolet radiation during their lifetime without developing cancer”, for example.

Close in meaning is capital santé which is sort of health and fitness combined. Surprisingly, there is no word for “fitness” in French so salle de fitness and centre de fitness are used.

Yet the French go on fitness kicks as much as anyone else. Maybe the idea could be expressed using forme. J’ai retrouvé la forme means that I got back in shape or got fit again and il a la forme means he’s very fit (well, in the physical sense anyway – it can also mean “he’s in great form”).

So back to capital. Here are some other examples of capital in French where we wouldn’t use “capital” in English (examples from the Robert-Collins dictionary which, if you’re going to use a bilingual dictionary, is probably the best because Harraps has become outdated and the others are pitiful):

Capital is used in the financial sense of course and we have all sorts of lovely expressions there as well, sometimes using “capital” and sometimes not:

capitaux fébriles = hot money (I love that one!)

capitaux propres = equity capital (where propre = own and not clean! “Dirty money” is argent noir or sale)

This entry was posted in French language and tagged capital soleil in English, Friday's French. Bookmark the permalink.