My Piano Finds a New Home

When I was a child I loved singing but unfortunately I was constantly told that I was singing out of key or that I was tone deaf. I had no idea what that meant of course and still sang along gustily with my more gifted siblings when we spent whole days in the car going down to Brisbane for the holidays. I still have our little song book from that period with Bell Bottom Trousers, A Bicycle Built for Two, The Old Grey Mare and other songs of that ilk. Only my father, who was not very musical, defended me. 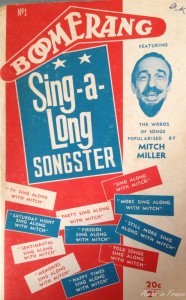 When I was about 6 or 7, we acquired a stereogram and my mother gradually collected the popular musical comedies of the time, particularly those of Rogers and Hamerstein. I still know all the words to Oklahoma, Carousel, South Pacific, The King and I and The Sound of Music. But my favourite was Salad Days written by Julian Slade and Dorothy Reynolds as a summer musical for the Bristol Old Vic’s resident company. It’s one of the London West End’s longest running musicals even though the music and lyrics are nothing sensational. 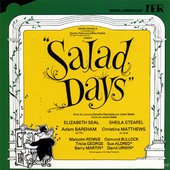 My request to learn the piano was turned down and I was put into Speech and Drama classes instead. I went on to get my licentiate (teaching diploma), the significance of which you’ll see later on. I was told by my mother many years later that she didn’t want any of us to learn the piano because she used to spend most of her celibate evenings out playing so that the rest of the company could dance! She didn’t want that to happen to us.

My youngest brother turned out to have a wonderful singing voice so had private lessons and won prizes at the local eistedfodd. No one realised that I should have had singing lessons too! But I didn’t know then that it was possible to learn to sing in key. I sang in the shower, I sang when I took my dog for walks, I sang in the car with the window wide open as we whizzed along at 90 miles an hour and no one could hear me. 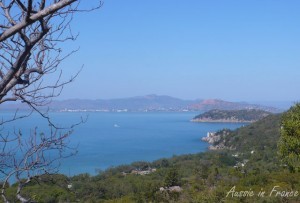 The most embarrassing moment was being voice-tested for the school choir, especially the year when I was school captain. I developed a sneeze that I could bring out at will so no one at school actually heard my singing voice. I just said I was alto and sung under my breath. For many years, there was an annual school performance starring all the music pupils. I was so envious the year they put on The King and I and I couldn’t even participate.

When my children were born, I sang to them all the time and even made up songs for them and they never complained about my voice. They liked my singing. Recently, I played some Peter, Paul and Mary songs for Black Cat on my iPad and she looked at me in amazement, “Is that Puff the Magic Dragon I’m hearing?” 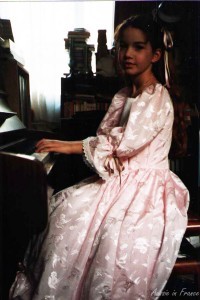 Black Cat wearing her princess dress at a musical afternoon

Somewhere in the back of my mind, the lyrics from Salad Days remained with me and when Black Cat was 6, I started “looking for a piano, not just any old piano, the one that makes you sing“. The words are actually “the one that makes you laugh” but that’s how I remembered it. I had also realised by then that the methods I used to teach children to pronounce words correctly could be applied to singing. Once you hear the sound correctly, you can pronounce it.

So I went to a piano shop and bought a beautiful new German piano and Black Cat and I both started learning privately with an Australian woman and it worked – I did learn to sing on key! I later joined the choir at the local music academy (conservatoire) and was able to participate in a number of live performances from which I derived great satisfaction. 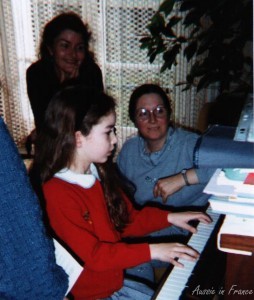 Proud mums at a musical afternoon

I loved learning the piano. I spent hours practising and managed to make reasonable progress. However, an adult doesn’t have the same capacity as a child and it required a lot of hard work. After my divorce, Black Cat and I went to the consevatoire as it was cheaper and I had to sit for an exam each year. The piece I could play perfectly for my teacher’s ears alone dissolved as soon as the examiner walked into the room and my fingers went to jelly.

In the meantime, I started organising musical afternoons for my friends and their children who sang or played instruments. We had a cello, a violin, two clarinettes and a trombone. I found sheet music for several instruments and all the little brothers and sisters of the instrument players had xylophones and triangles. Leonardo took up the clarinette so was able to participate as well. I often played duets with Black Cat, with me always playing the easier part of course. 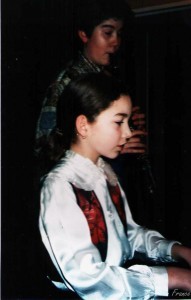 I eventually stopped playing when I realised that the hours I would have to spend praticising would not lead to any great improvement in my level. I had achieved what I really wanted – I had learnt to sing – and even though I am still reticent about singing in front of other people, I think I can actually hold a tune these days.

Black Cat became busy with other things and no longer had time for lessons. I occasionally had the piano tuned but it mainly stayed closed until two years ago, when Brainy Pianist from Sydney spent a year with one of Jean Michel’s son on an exchange. When I learnt that he played the piano, I immediately had it tuned and on Wednesday nights, before the family dinner, he would come and play for a half an hour while we were preparing the meal, breathing new life into the piano. 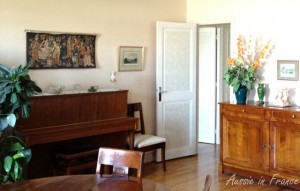 The piano before it was taken away

As our move to Blois gets closer, we are working out how everything will fit into the new house. I thought a lot about the piano and finally decided it was pointless keeping an instrument that no one plays and that is getting older every year. I mentioned it to the mother of Céline, the cello player from our musical afternoons one day and the next thing, I had an email from Céline.

She now has three little boys. She brought them along so she could try out the piano. The second little boy in particular seems to have an aptitude and Céline herself plays both piano and cello, which has kept up over the years. 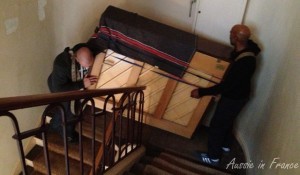 Taking the piano down 4 flights of stairs

So when the piano left yesterday, in the capable hands of two movers, who carried it carefully down our four flights of stairs (it was brought up 8 years ago by a single person called a porteur), I was sad and happy at the same time. Sad because the piano represents so much to me and happy because it will now be used and loved every day.

This entry was posted in Family and tagged piano. Bookmark the permalink.

3 Responses to My Piano Finds a New Home