I’m telling someone about our little wood and explain that the biches ate all our medlars. “We don’t have any biches“, says Jean Michel. “We only have chevreuils“. “Isn’t it the same thing”, I ask. “No, it’s not. The only thing in common is that they’re all cervidés“, he replies. “Well, they are all deer to me”, I answer.

And there you go. It’s one of those words where the generic is used in English with something tagged on to describe the individual species. Remember nuts? I then asked what the difference was between a biche and a chevreuil. “The biche is much bigger”, I’m told. So we turned on the iPad and this is what we found.

First, the word biche is sometimes used incorrectly. It should only be used to designate the female of a cerf. But I thought a cerf was a stag which is a male deer so there is obviously something wrong. You can hardly talk about a female stag, can you? I then find a wonderful document on www.gmb.asso.fr by the Groupe Mammalogique Bréton. 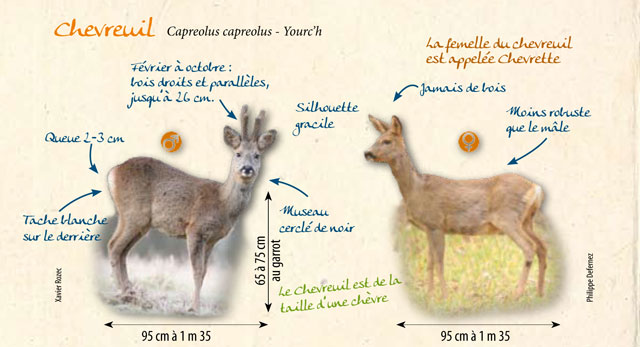 Chevreuil is capreolus capreolus and when I look for that in English I find European roe deer, also known as western roe deer, chevreuil or just roe deer. We now have the size: 65 to 75 cm high, and learn they have a white patch on their rear (bean shaped for males and heart-shaped for females). The tail is 2 to 3 cm long and the males have antlers of up to 26 cm, called bois which literally means “wood”, but we’ll come back to that later. The female is called a chevrette. 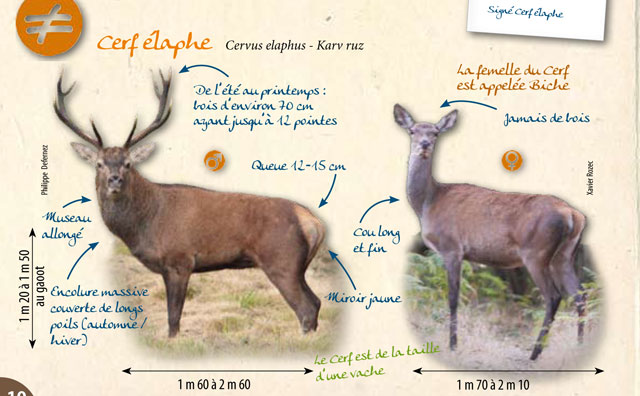 Since the stag and doe question is bothering me, I do some more research. In English, I find various sorts of deer such as fallow deer, reindeer and elk. I learn that the word “deer” was originally broader in meaning and meant a wild animal of any kind as opposed to cattle.

Usually, the male is a “buck” and the female a “doe” but there are regional variations. “Stag” is used for many larger deer and sometimes even “bull” and “cow” are used. The male red deer is a “hart” and the female a “hind”. Young deer can be called fawn for the smaller species and calf the the bigger ones. A castrated male deer is a havier, which I have never heard of before.

Now let’s have a look in French. A fallow deer is a daim and the female is daine. The female of renne (reindeer) is renne femelle which isn’t very exciting, is it? Elk is élan and follows the same rule. The names for the young are much more complicated: faon is used for the cerf, chevreuil, daim and renne; hère for a young cerf aged 6 months to one year with no antlers; daguet applies to a young cerf with his first set of antlers and brocard is a male chevreuil more than one year old. I’m sure I’ll remember all that!

To sum up, they are all called deer in English and all called cervidés in French but you need to make the distinction in French between the different species. The term “cervids” exists in English but is a scientific term and most lay people probably wouldn’t know what it was.

And to quote Susan from Days on the Claise in her comment: “Really big deer (American elk, moose) are bull and cow; big deer (red) are stag (cerf) and hind (biche); small deer (fallow, roe) are buck and doe. The only red and fallow deer you will see here are captive (farms or deer parks) although they would once have roamed freely as wild animals. Roe deer are common in the wild (too common, in fact, and need culling). Hart is an old fashioned word for stag that you won’t really find used these days.”

Since antlers are called bois, I checked what they are made of. They are an extension of the animal’s skull and are actually bones. Velvet covers a growing antler and provides it with blood, supplying oxygen and nutrients. Fascinating. Surprisingly, antler comes from Old French antoillier (from ant-, meaning before, oeil, meaning eye and -ier, a suffix indicating an action or state of being, so kind of loosely “behind the eye”. But in fact there is another word relating to antlers in French – andouillers are the branches of the antlers, called tine in English which, as we all know (knew?) are also the prongs of a fork or comb.

Next time I mention the medlars I shall definitely talk about chevreuils.