Posted on December 6, 2013 by Rosemary Kneipp

I made my Christmas cake this week using the recipe handed down to my mother by her mother. For the last 8 years, I’ve been able to buy all the dried and candied fruit (peel) at my local market but the stall has closed so I’ve been chasing around Paris for such simple ingredients as currants and raisins.  Not so simple in France however. 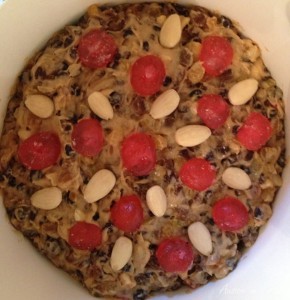 The word raisin is an interesting one. In French, it means grape and what we call raisins are raisins secs (dried grapes). However, in Australia (and apparently the other Commonwealth countries), raisin describes a particular sort of large dried grape.

The most common raisins secs in France are what we call sultanas in Australia, except that they are darker. However, you can buy sultanines here which are usually a golden colour and sometimes called raisins blonds.

Our currants, which are very small black raisins secs are raisins de Corinthe – currant is a degradation of the word Corinth.

As far as I know, there is no generic term in Australian English for dried grapes though raisin would seem to cover the lot in American English.

When hunting for my currants, sultanas and raisins, I came across other varieties of raisins secs: raisins de Malaga (in Spain), raisins de Muscat (like our muscatelles), raisin de smyrne, . 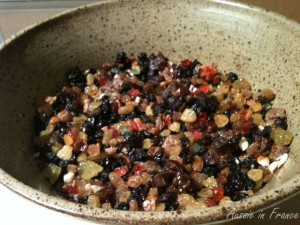 If you buy mélange de fruits secs, you’ll find yourself with a mixture of raisins secs and nuts, whereas dried fruit in English only includes dried grapes, figs, abricots, etc.

Now, that’s  a word that doesn’t exist in French – nuts. You have to specify the type: walnut  = noix, hazelnut = noisette , cashew nut = noix de cajou, peanut = cacahuète, almond = amande. They all come under fruit sec, but that’s not very satisfactory, is it?