For this week’s Blogger Round-Up, I have two posts related to Christmas and one from a new member of the blogosphere on Budapest. Phoebe from Lou Messugo explains the do’s and don’t’s of wishing people a merry Christmas and happy new year in France while Susan from Days on the Claise takes us to the last market before Christmas – but it’s not too late because the same scenario will be repeated for New Year. Our new blogger is Anda from Travel Notes and Beyond whom you have already seen in one of my earlier posts. You’ll love her suggestions for authentic restaurants in Budapest. Enjoy!

It’s the build-up to Christmas and every time I see someone I won’t see again until after the new year I wish them a Merry Christmas and Happy New Year…if I’m speaking in English to a non-French friend.  However, if it’s in French to a French friend then it’s a more generalised greeting “bonnes fêtes de fin d’année” which means happy end of year celebrations and is more like the American “Happy Holidays”.  I could say “joyeux noël” (happy Christmas) though it’s less common but I mustn’t wish them a Happy New Year.  It’s considered bad luck to wish Happy New Year before midnight on the 31st. Read more

The Last Market Day Before Christmas 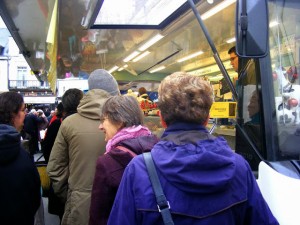 Saturday was the last market day in Loches before Christmas. I took a few pictures to try and give a sense of market shopping, but to be honest, it isn’t easy to take photos and shop at the same time.

Standing in line at the cheese stall. Note the pair in the background exchanging the standard cheek kisses in greeting. The cheese stall had twice as many staff as usual and there was still a queue, so they were doing good business. Read more 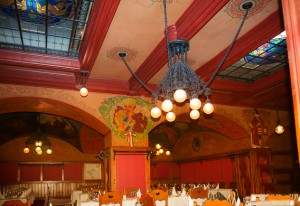 Budapest is not short of good restaurants, cafés, and bistros, but finding real authentic ones that are also a good value for your money is not easy. As in any big city with a plethora of choices, visitors get confused by the internet reviews and recommendations, often sponsored by the restaurants themselves. Like many others ahead of me, I had my fair share of disappointments and paid my price for the knowledge I gained in this field. Below is my list of recommendations, based on what I feel makes a good value restaurant. Read more