Fontevraud l’Abbaye and its Extraordinary Kitchen

It’s the second day of our spring cycling weekend near Saumur. We wake up in time for 9 am breakfast at our B&B, Le Balcon Bleu, having slept very soundly in a comfortable bed after all our hills and dales of the day before. 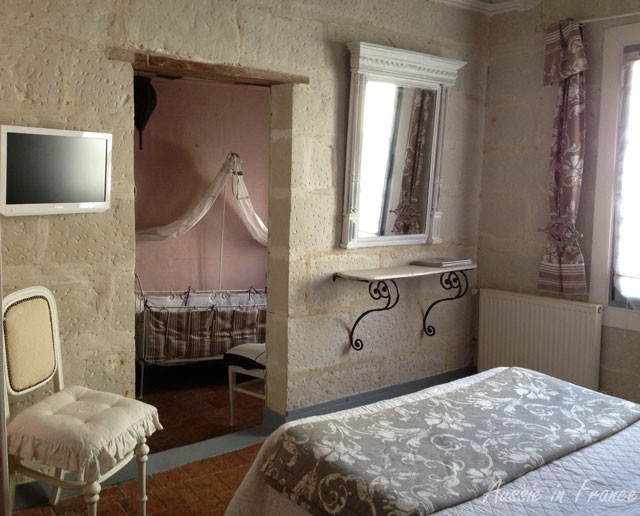 We pass through the inner courtyard with its stunning Clematitis armandii and into the breakfast room. Well, you’ve already seen the photos – a cross between a brocante and an art gallery. Certainly a lovely room in which to start the day. 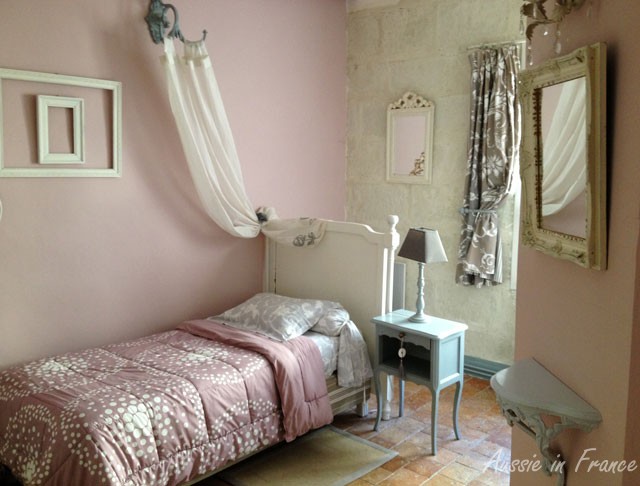 The single bedroom with the most typical decoration

Breakfast is standard French fare, but of good quality: orange juice, fresh baguette, butter, several home-made jams and home-made yoghurt. Certainly not what Bread is Pain likes to see on the breakfast table though. We soon start chatting to our hostess who is a mine of information and since the other guests have not yet arrived, we invite her to sit down with us. 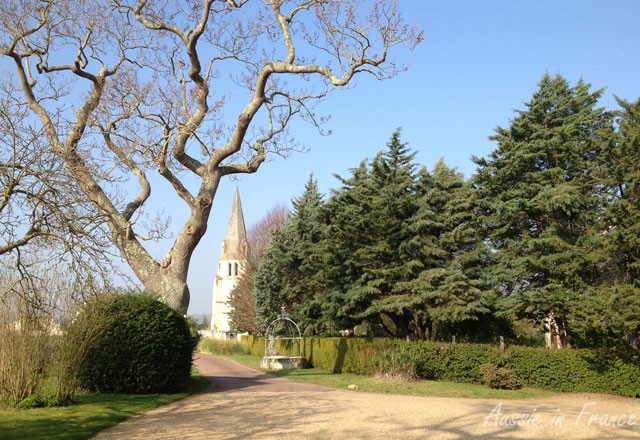 The view from Château de Villeneuve winery in Souzay-Champigny

After breakfast, we pick up some local saumur-champigny vieilles vignes from Château de Villeneuve and drive to Fontevraud l’Abbey which is why we chose to stay in Turquant, as it is only a short distance away. The sky is deep blue but it’s still a little chilly to cycle. 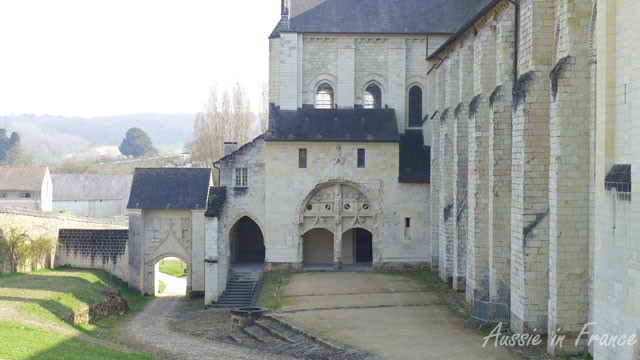 The first view of Fontevraud when you enter the abbey, with the church on the right

We’re just in time for a guided tour suggested by our hostess, which turns out to be really excellent. They even have very light folding seats you can take around with you. 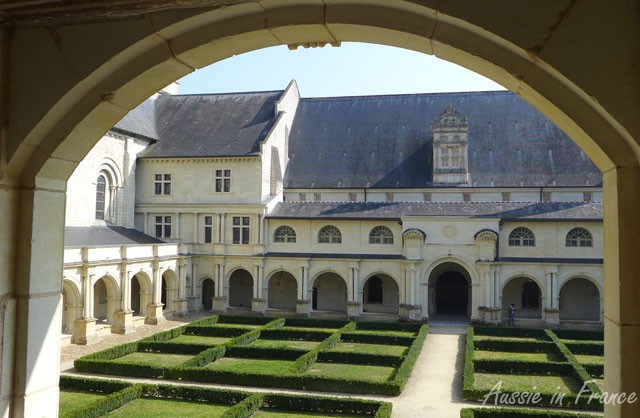 The monastery, which was actually a group of four monasteries, was founded in 1101 by a wandering preacher called Robert d’Arbrissel who had such a following that he was ordered to settle somewhere. There was a monastery for women, one for men, another for repented women and another for lepers. 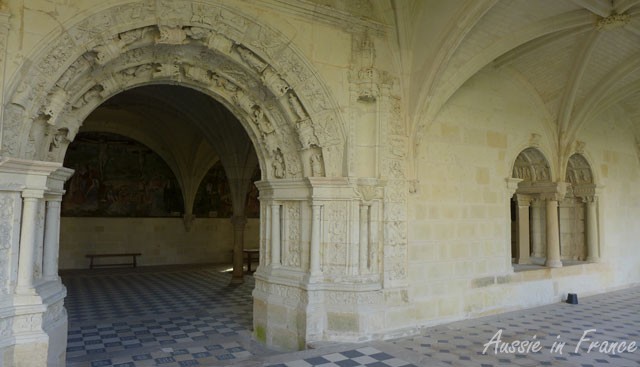 Thirty-six abbesses ruled the abbey during seven centuries of monastic life, many of royal birth. The women’s lives entailed mostly hardship from what I gather as very few were there by choice. One of the nuns tried to poison another three times before being sent to solitary confinement (forever, I might add). 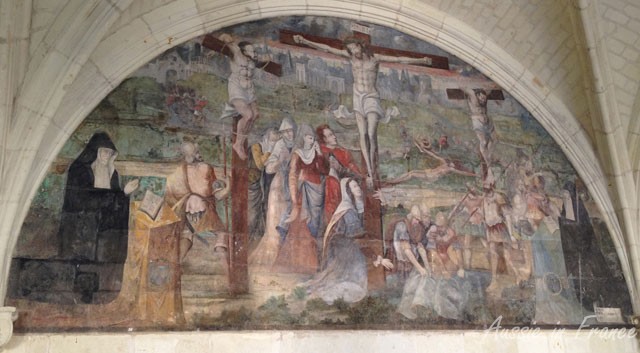 The French Revolution closed the abbey in 1792 until it was turned into one of France’s most severe prisons from 1804 to 1963. The thousand or so inmates provided the manpower to convert the abbey into a fortress, learning all the trades needed to do so.

Restauration began after the prison was closed and the abbey was open to the public in 1985. 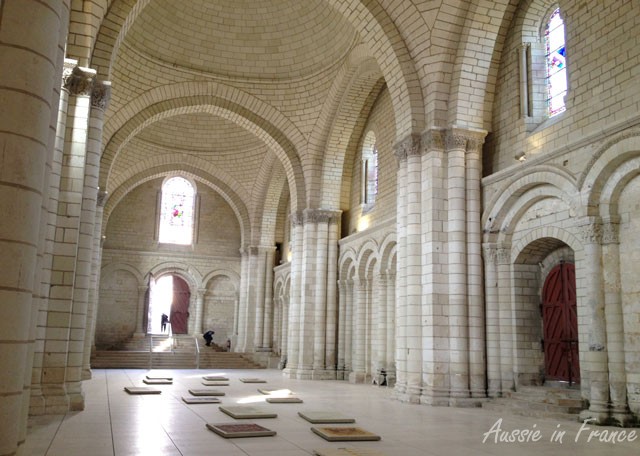 Inside the abbey church

We visit various rooms, starting with the church which contains the recumbent statues of Aliénor d’Aquitaine, one of the countries most illustrious figures in the twelfth century, along with the smaller statues of her husband, the future Henry II Plantagenet of England, their son Richard the Lionheart, and his sister-in-law, Isabelle d’Angoulême who was married to Richard’s brother John Lackland. 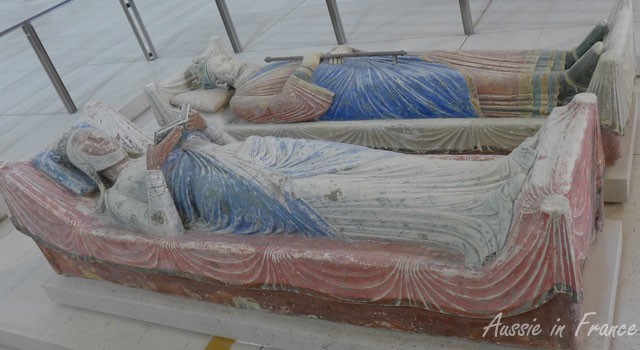 The recumbent statues of Aliénor dAquitaine and Henry II

Next comes the cloister followed by the confession room in which the nuns had to own up to their misdemeanours including the aforementioned poisoning! 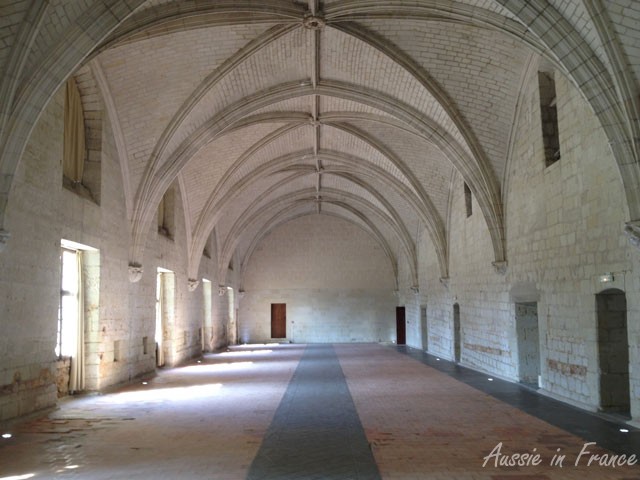 After visiting the enormous refectory to which a floor was added to create prison cells and most of the doors blocked up, we come out into the open. 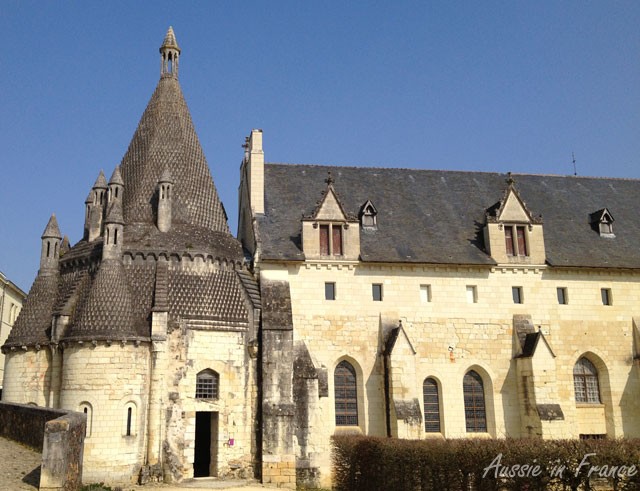 Here it is at last – the most recognisable part of Fontevraud l’Abbaye – its strange octagonal kitchen 25 metres high with its many pointed roofs made of stone from Charente and not the local tufa which is much softer. 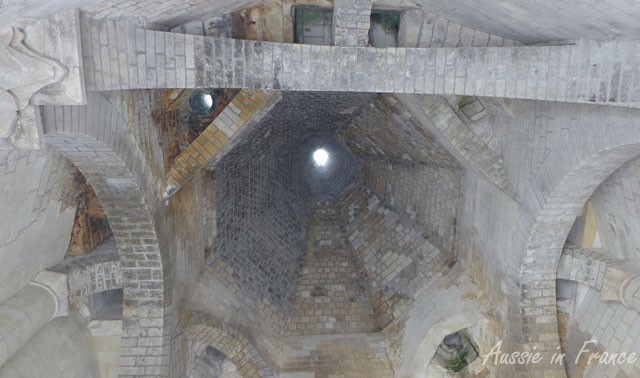 Inside one of the 21 chimneys

Its Byzantine style brought back from the crucades is very different from the other buildings. The 21 chimneys covered with fish-scales were used to evacuate the smoke from the smoked fish below, the monastery’s staple diet. 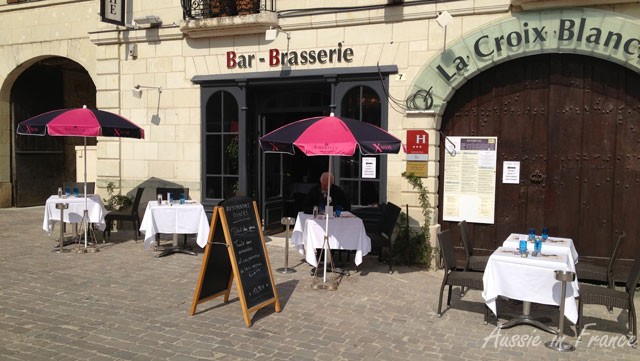 Although there are two restaurants within the Abbey, we decide to see what’s offering on the main square and are delighted to find there are plenty of outside tables free at La Croix Blanche.  Nothing extraordinary but we like the setting. 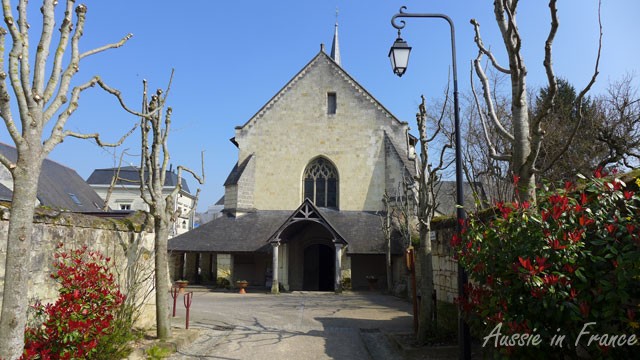 Before going back to the car, we wander around and find the little parish church of Saint Michel in Fontevraud-l’Abbaye with its “chat room” built in the 12th century for the large contingent of labourers employed to build the abbey and was financed by Henri II Plantagenet and Alienor d’Aquitaine. It was extended in the 15th and 17th centuries.

Thinking of the hills that no doubt await us when we get back on our bikes in Saumur, I somewhat regret the entrecôte, French fries and wine!

I’m including this post in Lou Messugo’s ALL ABOUT FRANCE blog link.

17 Responses to Fontevraud l’Abbaye and its Extraordinary Kitchen