The sky is overcast and we’re hoping it’s not going to rain because we’re about to attend the 8th annual bread-making day in our neighbourhood, Les Grouets. It’s all happening at a bread-oven I’ve already photographed in the past. 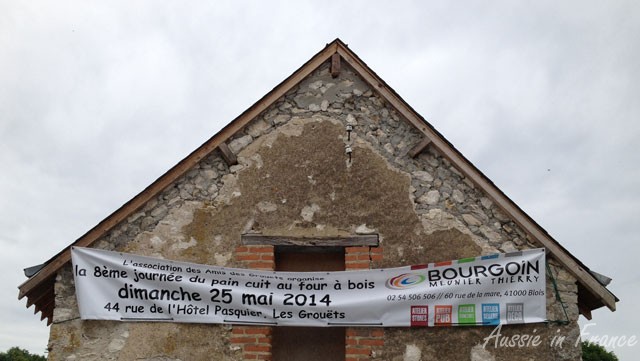 We didn’t expect to be in Blois this weekend so we’re not sure of the programme. We arrive about 11 am and things are already in full swing. The baker is busy baking, the man who sells Les Grouets biscuits on the market is busy talking, the local caterer is busy selling his wares, the local wine grower is busy pouring glasses of wine and the other female members of the Amis des Grouets association are busy selling loaves of grouetin bread and brioche. 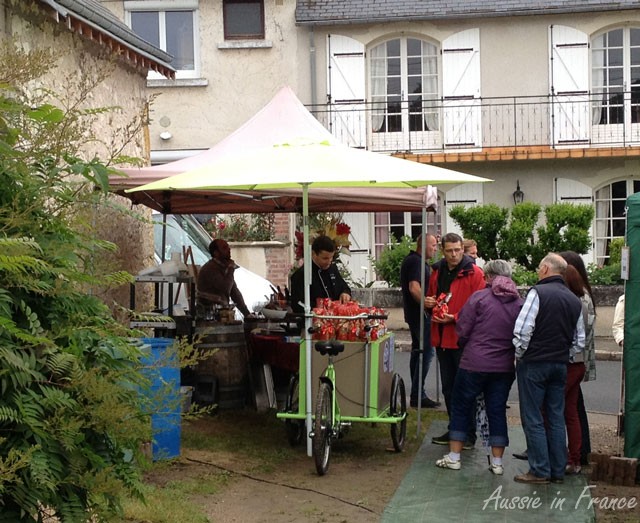 Our neighbours talking to the biscuit maker

After talking to the biscuit maker and the wine grower, we make our way to the main tent to buy some bread. We are welcomed by the president of the association who is squeezing an endless succession of limes for the midday apéritif – for all those present, though it’s better if we buy something, he explains. 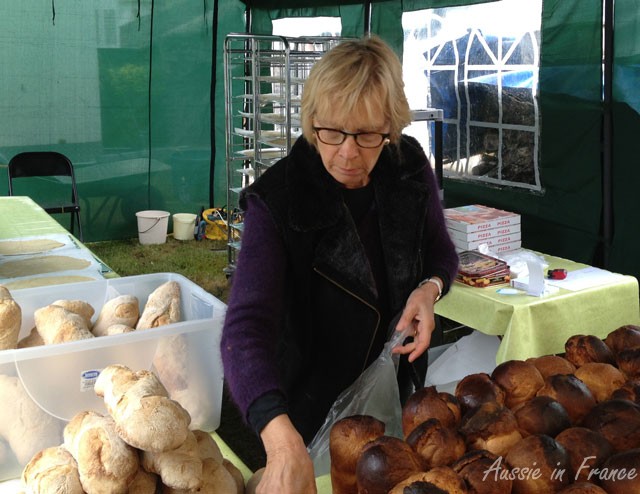 Some of our neighbours arrive to buy pizzas so we put in an order too. Jean Michel goes off to put the bread and brioche in the car while I continue talking to the neighbours. Then I spy the lilac lady who used to live in our “house of happiness” 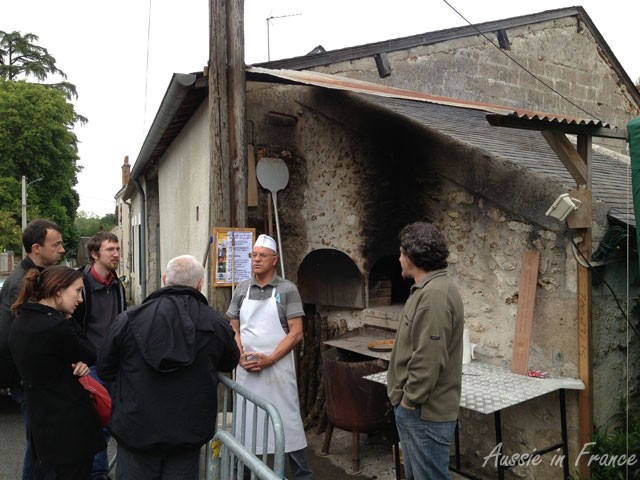 The temporary baker discussing his trade

I go over to see her and see exclaims in surprise, “Oh, how lovely ! You said you wouldn’t be here this weekend. Let me introduce you to everyone.” It turns out the baker (who’s not a baker the rest of the time, just the owner of the bread-oven) is her brother. 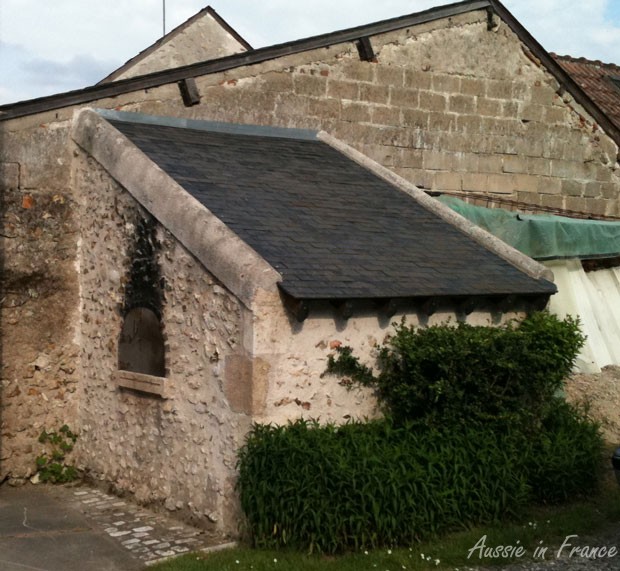 The bread oven the rest of the year

She then introduces us to her sister-in-law and two nieces who used to live in our little house. She is very generous in her praise of us and tells them all that we are très sympathiques. We recount our lilac story and they soon start reminiscing about the little house and the middle house. We learn that their aunts lived in the house on the other side of ours as well. 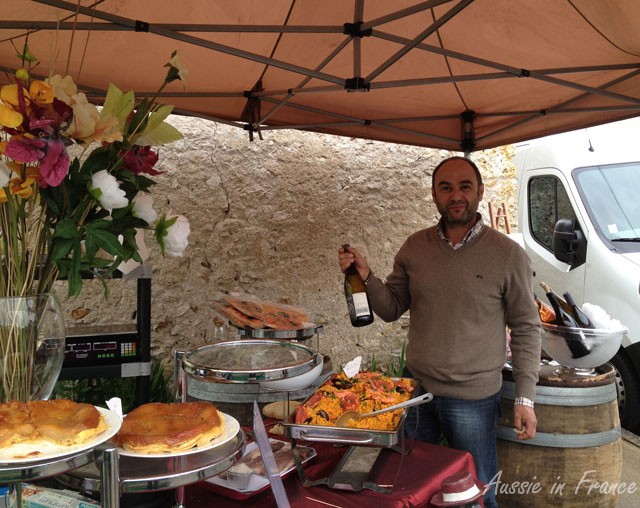 Who’s for some wine? And maybe some of that paella?

We all go into the tent for our aperitif and the lilac lady insists that we stay with them. We buy some little freshly-baked bread rolls with rillettes and sardines to go with our lime, sparkling white wine and dash-of-cointreau cocktail. Better not have too many of them! 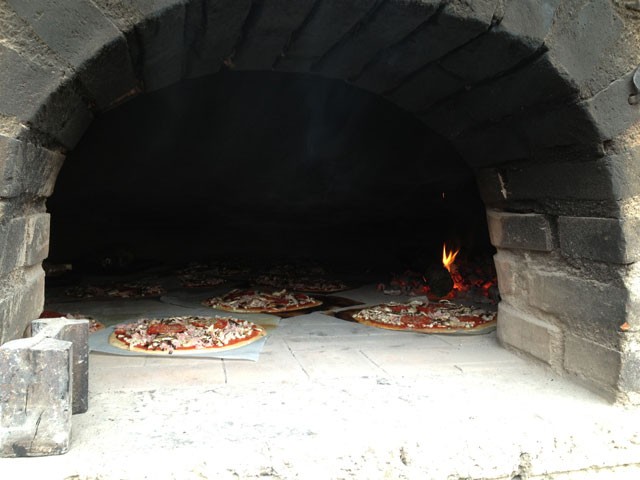 Our pizza in the oven

Somehow the pizza orders have gotten well behind but at 2 pm, we eventually collect ours and take it home to eat in the little house which has taken on a new dimension now that we have met the last people to have lived there! 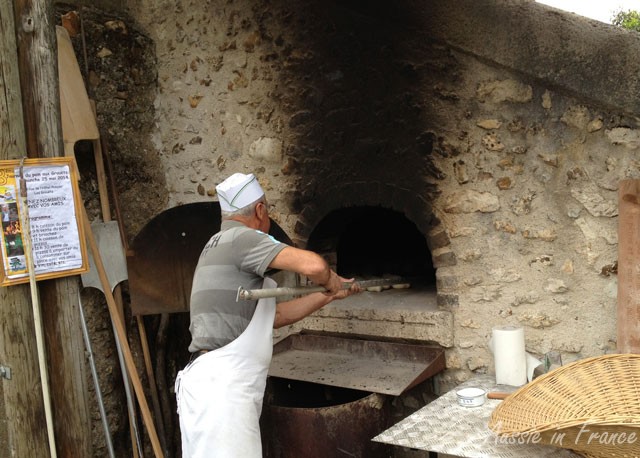 And in the oven it goes!

We’re looking forward to the next event when we’re living full-time in Les Grouets – the end-of-year dinner at the little château at the end of our street. And next year, I’ll be able to take my own bread along to bake as there is little chance of our own bread oven being functional for some time yet!