When I first got married in France and saw our livret de famille I thought it was very neat although I didn’t realise its importance. It’s a little book in which the details of your marriage are written and which is completed with each child. When you get divorced, your livret is updated as well. If you are not married, you are issued a livret de famille when your first child is born. If you separate or divorce, you get another one. 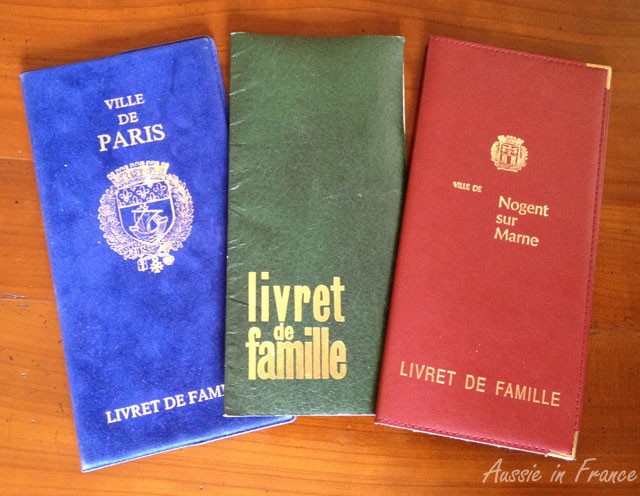 Each town hall chooses its own cover. The Paris one is velvet!

The first thing I discovered when my children when to school was the fiche d’état civil which was a piece of paper delivered by the town hall containing the information about an individual child taken from the livret. I even needed one when Black Cat started ballet! What a waste of time. What busy mother (or father) wants to go to the town hall and sit around waiting for a civil servant to copy information by hand onto a piece of paper?

At the time, the only ID in Australia was a drivers licence or passport and children certainly didn’t need ID if they stayed within the country! Fortunately, the fiche d’état civil was abandoned in the year 2000 and the carte d’identité became compulsory and free even for children. 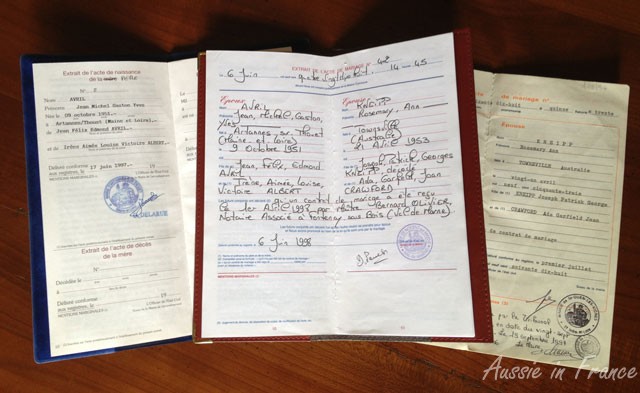 Inside the livret. If you’re not married, it starts with the mother’s or father’s details of birth. If the parents are separated or divorced, each can have a livret. The one on the right shows my divorce details.

So what exactly is a fiche, you might be wondering (état civil = civil status). It’s one of those funny words that has several meanings and no satisfactory translation usually because we don’t often have an equivalent concept.

The fiche d’état civil was a flimsy bit of A4 paper. A fiche can also be made of stiff paper or cardboard such as a fiche-cuisine which is a recipe card. Those cards we used to take notes on and put in a filing box in the old days were called fiches. Index cards, if I remember rightly.

At the doctor’s, you might be asked to fill out a fiche which I guess we would call a form. But there is also the word formulaire. I asked Jean Michel to explain the difference between fiche and formulaire. “Bonne question”, was his typical reply.

Its seems that a fiche is used to contain basic data whereas a formulaire is used to make a request, such as a passport or enrolment formula (fiche d’inscription).

Another popular fiche is the fiche de paie or pay slip which you are supposed to keep for your entire life if you want to get your pension.

A fiche technique is a specification sheet or spec.

And to go back to livret, when else do we use the word in French? A livret de caisse d’épargne is a savings bankbook (pretty rare these days), and a livret scolaire is a report book, though I don’t know if they have those any more. Livret can also be used to describe any booklet and even a catalogue for an art show, for example.

An opera libretto is a livret d’opéra.

Perhaps you know other meanings of the word fiche?