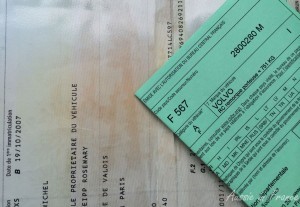 I’m reading a book in French and come across an expression I don’t know (which doesn’t often happen – I’m a translator after all). “C’est quoi, prendre une prune”, I ask Jean Michel. “Une amende”. So why would you call a speeding or a parking ticket a plum? Maybe it’s the colour of the ticket, he surmises, like a carte verte or carte grise. Prune incidentally corresponds to what we call burgundy.

This is very typical of French – designating something by its appearance rather than its purpose. Carte grise is what EVERYONE calls car registration papers and the carte verte is the insurance certificate and not a working visa.

However, I checked out prune and the expression doesn’t seem to have anything to do with the colour but rather the fruit. Back in the 13th century, prune already had several metaphorical meanings: a blow, bad luck, something worthless, all of which correspond pretty well to a speeding or a parking ticket.

The actual reason why prune developed these meanings is obscure but one legend has it that the crusaders brought back plum trees from Damask after the second crusade which they lost, prompting the king to say, “Don’t tell me you only went there for plums” (i.e. for nothing).

Another ticket-related colour is aubergine which later became pervenche or periwinkle blue used to designate traffic wardens after the colour of their uniforms. Their official name is contractuelle because they are employed on a contractual basis and are not regular civil servants.

The real name for a ticket is a PV or procès-verbal, which is really the strangest thing because it literally means a verbal process, yet it’s written down.

Many years ago, I accidentally went through a red light (I didn’t see it – it was one of those very low ones and I was turning right) and was stopped by a policeman. He asked for my carte grise, carte verte and permis de conduire (which used to be pink but was never called a pinkie which, incidentally, is petit doigt or auriculaire in French because it is the only one small enough to be inserted into the ear).

I did the “excusez-moi monsieur, je suis vraiment désolée, je n’ai pas vu le feu” bit and he answered “je ne vais pas vous verbaliser” which I assumed meant I wasn’t going to get away with a spoken reprimand and that he was giving me a ticket. But he waved me away instead! Verbaliser actually means to give someone a procès-verbal. Very disconcerting.

Do you know any more expressions based on colour?

10 Responses to Friday’s French – prune and other metaphorical colours