We’re off to the sunny French Riviera for this week’s blogger round-up, starting with Margo Lestz from The Curious Rambler who gives a very interesting historical explanation of the August exodus I mentioned recently. Next, Chrissie from Riviera Grapevine introduces us to the wonderful and often unknown wines of the French Mediterranean Coast. To finish off, Mohammad Riza Amirinia from The Good Life France takes us on a cruise down the Canal du Rhone to Sète. Enjoy!

The Grand Vacations: July and August in France

by Margo Lestz from The Curious Rambler, who lives in Nice, France where she likes to bask in the sunshine, study the French language and blog 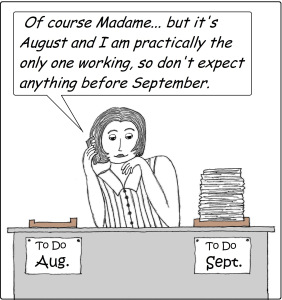 The French love their holidays. There are lots of them scattered throughout the year but July and August are the months of les grandes vacances, or the “grand vacations”. Most people take two to three weeks off in either July or August. Those who vacation in July are called juillettists (pronounced jwee-yeah-teest) and those who take August holidays are called aoûtiens (pronounced ah-oo-sian). For the sake of simplicity, we’ll call them Julyists and Augustians. Read more

Vineyards of the Alpes Maritimes

by Chrissie from Riviera Grapevine, a Sydney girl living in Nice with an insatiable thirst for the wines of the Var, Alpes Maritimes and Liguria. She happily sells, drinks and blogs about 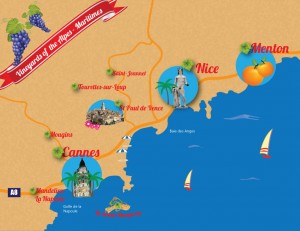 Did you know that you can enjoy wines from Menton, Mougins and Mandelieu?

As well as Saint-Jeannet, Saint-Paul de Vence, Tourettes-sur-Loup and even theLes Îles de Lérins off Cannes?

There really are vineyards in places least expected along our azure coast!

The aforementioned local vineyards are all classified as IGP, which stands for indication géographique protégée (or vin de pays).

So what’s the difference between an AOC (appellation d’origine contrôlée) and an IGP? Read more

A Cruise on the Canal du Rhône to Sète

By Mohammad Reza Amirinia for The Good Life France, an independent on-line magazine about France and all things French, covering all aspects of daily life including healthcare, finance, utilities, education, property and a whole lot more 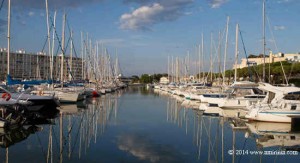 A cruise on the beautiful Canal du Rhone is to float deep into the heart of France, a chance to experience the famous nature reserves of the Camargue, a tranquil break that takes in several key destinations on the Rhone to Sète route…

I arrived at the Port of Bellegarde to take a self-drive cruise with Nicols Boats with my wife and two friends and met with the manager Ralfe, who presented us with a ten-year-old boat, one of their top models. Read more

This entry was posted in French customs, Travelling, Wine and tagged August in France, cruises in France, grandes vacances in France, Riviera wines. Bookmark the permalink.

7 Responses to Weekly Blogger Round-Up: July & August in France – Wines from the French Riviera – Cruising on the Canal du Rhône