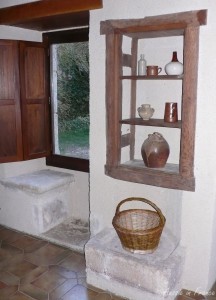 In Closerie Falaiseau our late 16th century house in the Loire Valley, we have a little stone seat in the alcove formed by the 70 cm wall next to the window. In a 17th century house we used to rent at Christmas in Normandy, there was one each side of the window.

Last weekend we visited château de Fougères in the Loire Valley and I was delighted to learn there is actually a name for this little seat – un coussiège.

Usually made of stone, they were common in mediaeval constructions and formed part of the wall. They were covered with wood and cushions (coussins).

Now this got me thinking about where the word coussin comes from. I wondered whether it came from the word coudre which means “to sew” in French, because the ladies often sat next to the window with their embroidery watching the world go by because there was more light. A coussiège in that case would be a “sewing seat”.

But in fact, it comes from Vulgar Latin coxinus, which comes from coxa (thigh) and –inus, and means a stuffed object originally placed under the thighs. It might also come from the Latin culcita meaning mattress.

Cushion, which appeared in English in about 1300, comes from Old French coissin (12c., Modern French coussin), probably a variant of Vulgar Latin coxinum, from Latin coxa “hip, thigh”. Someone has counted more than 400 spellings of the plural of this word in Middle English wills and inventories. I can’t even begin to imagine that many spellings for the same term.

Also from the French word are Italian cuscino, Spanish cojin.

Coudre on the other hand, comes from Vulgar Latin cosere and Latin consuere, to sew (con means together). So much for the sewing seat theory!

So far, the only term I’ve found in English for coussiège is window seat which is most unimaginative and doesn’t conjure up mediaeval ladies sewing in the castle window. One day, a friend came buy with her little girl and showed her the coussiège. Some time later, my friend and I were having tea and wondered where she’d got to. You guessed it – she was downstairs on the coussiège being a mediaeval lady!