The last few times we’ve been mushroom picking, we haven’t had much luck because of the unusually mild autumn. The last time we were in Blois State forest we came across a group of forest workers and one of them told us that we should go over to Lancôme where there are beech trees which are the usual habitat of chanterelle mushrooms. 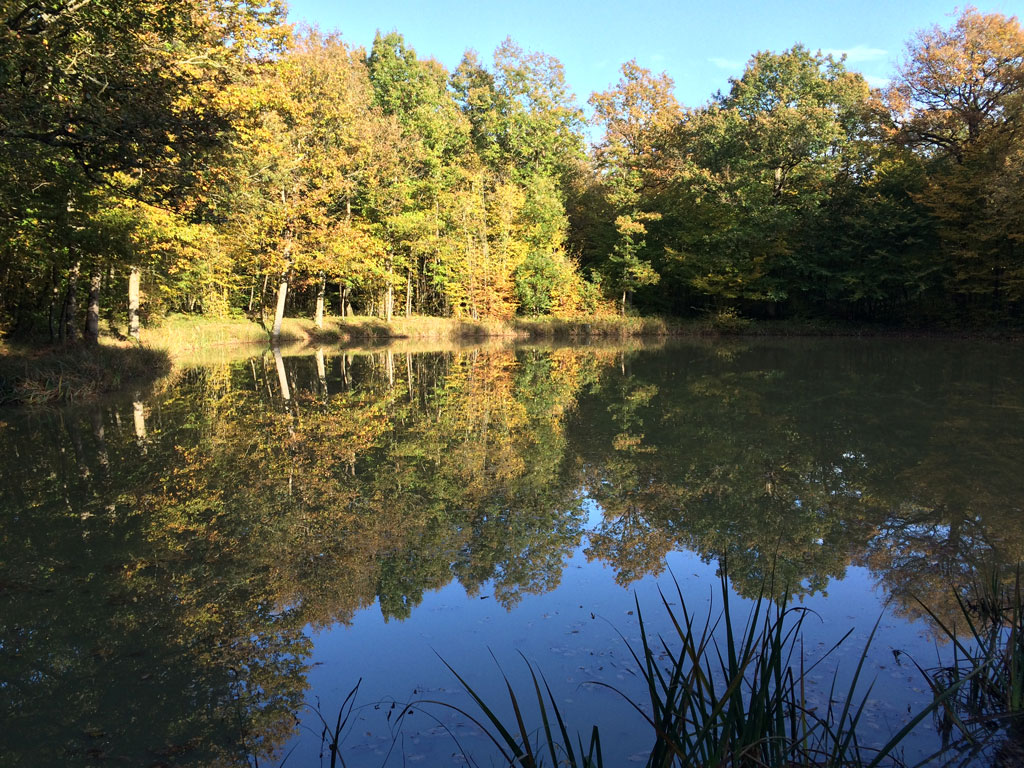 So one day, after some mushroom-producing rain, we drive the 25 minutes to Lancôme. We pull up at the first forest entrance where they is a lovely pond surrounded by autumn colours but also a large sign saying private – foraging and picking prohibited. We get back in the car and drive further. Each time, we find the same signs. In France, unless there is a sign saying keep out, you are allowed to walk in private woods and forests but not to remove anything. 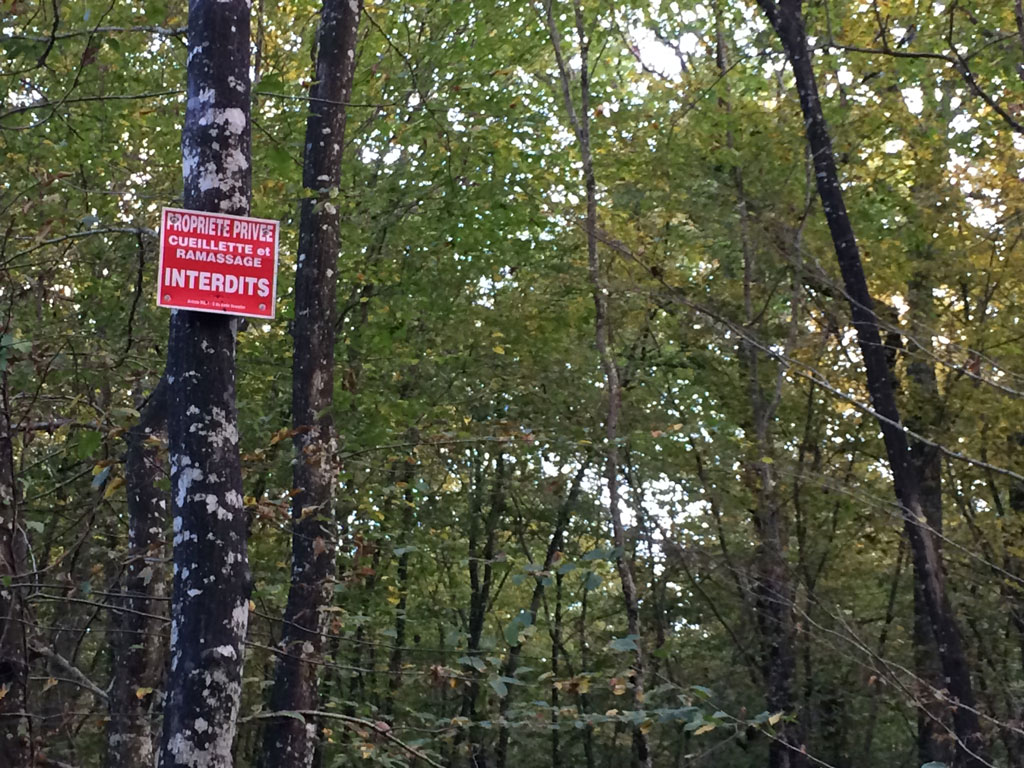 Sign prohibiting the collection of mushrooms and other edibles

Finally, we pull up on the edge of a field just next to some woods and can’t see any warning signs so we change into our big walking boots. I get the baskets out of the car, but Jean Michel advises me just to take a plastic bag just in case it turns out we’re not supposed to be there.

As we penetrate the forest, which has very little light, we gradually start to find hedgehog mushrooms, leccinum griseum, amethyst deceivers and even a beefsteak fungus and a cep de Bordeaux. 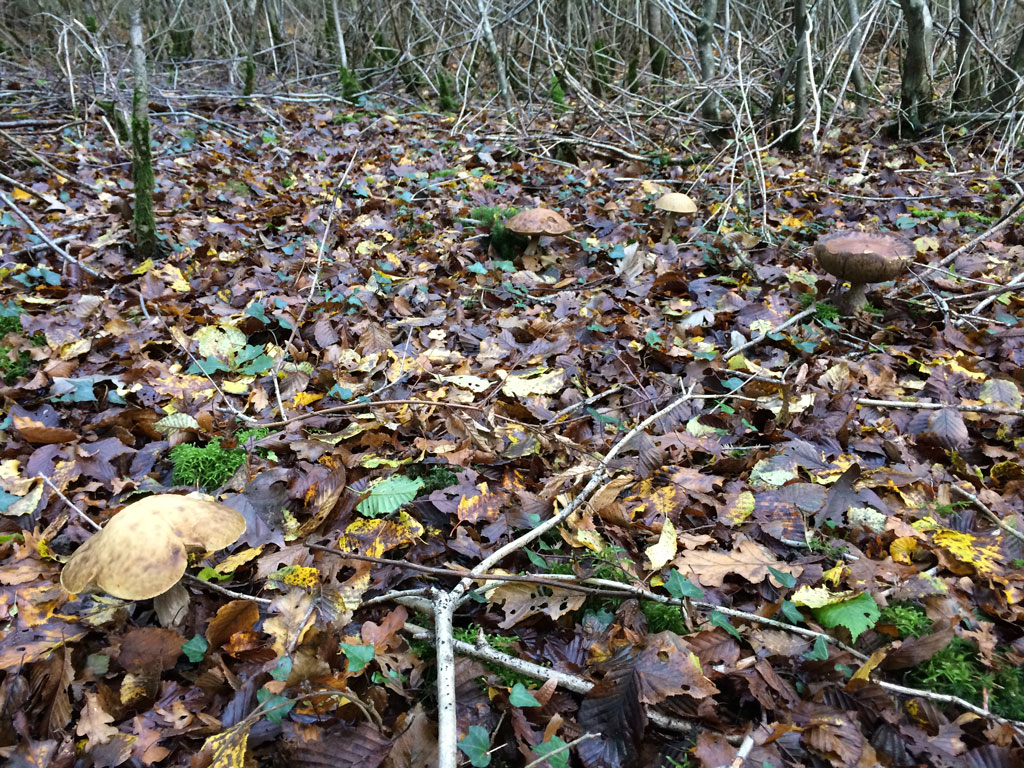 You can see the light grey caps of the leccinum griseum if you look closely.

We decide we have enough and head towards the car. As we reach the edge of the forest, we hear a car cruising along the road. Jean Michel immediately tells me to hide behind a large tree trunk and puts the plastic bag on the ground. 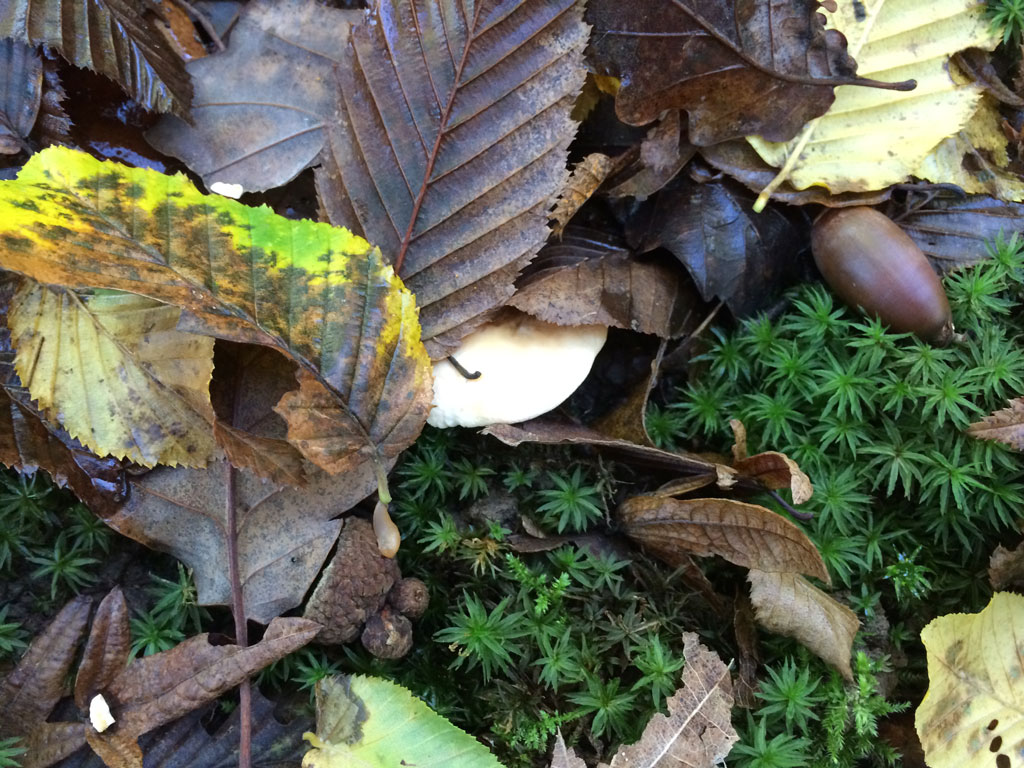 A hedgehog mushroom hidden under a leaf

We walk out onto the side of the road and the car stops. A man gets out. “Do I come and take things from your property”, he asks. I don’t say a word, because I don’t want him to hear my accent. Jean Michel takes a hail-fellow-well-met attitude. He explains about the forest workers but says that we’re not interested in going onto private property. We’re only there because there is no sign. “Oh I don’t want to put signs up”, he says. 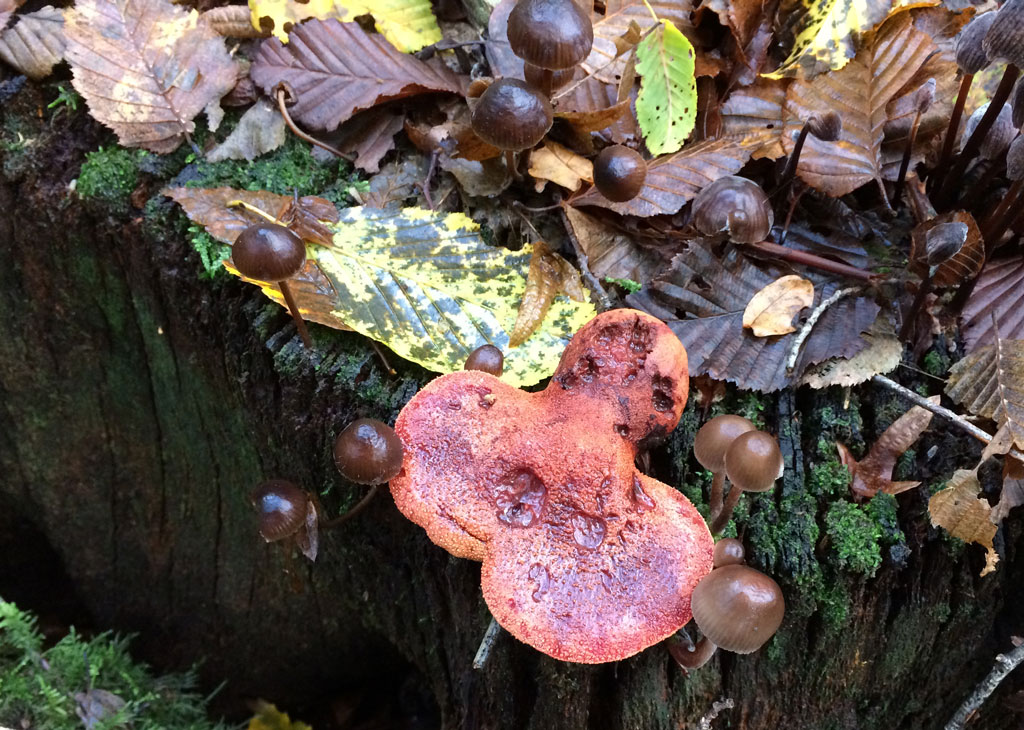 “I suppose you’re looking for mushrooms”, he goes on. “Yes”, says Jean Michel. “Well, there aren’t any”, says the farmer. “Oh, there are”, replies Jean Michel, “but only leccinum griseum and hedgehog mushrooms. No chanterelles.” “I don’t pick mushrooms myself”, says the man. “My forest is for hunting. If I find anyone with mushrooms, I confiscate them and throw them away.”

“”I was looking for you, you know. I saw the car, but couldn’t find you.” “Well, we weren’t hiding”, says Jean Michel. “We’re parked in full view of the road. We won’t be back in any case. We only like to forage in State forests because we don’t like trespassing.” 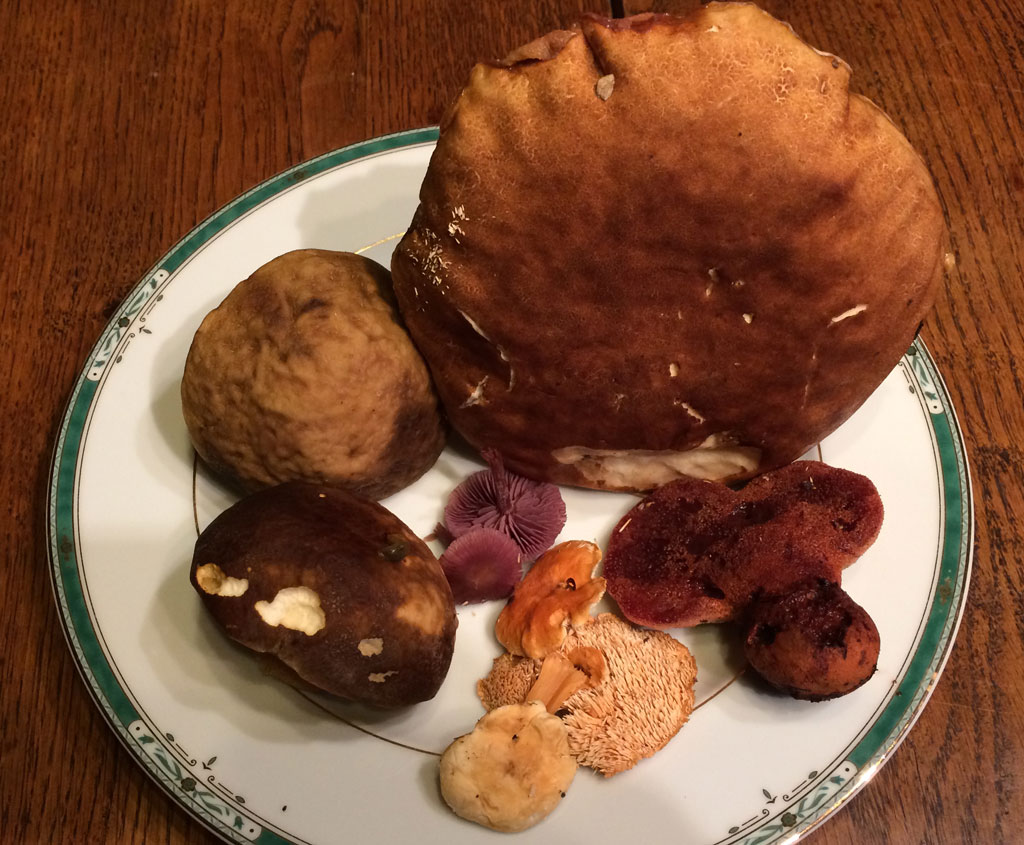 The farmer gets back in his car and we return to ours, but he continues cruising very slowly. We change our shoes and Jean Michel makes a big show of clapping his together to get off the mud off, so the farmer will think we’re leaving. He eventually drives off and Jean Michel sprints into the forest and retrieves our bag. 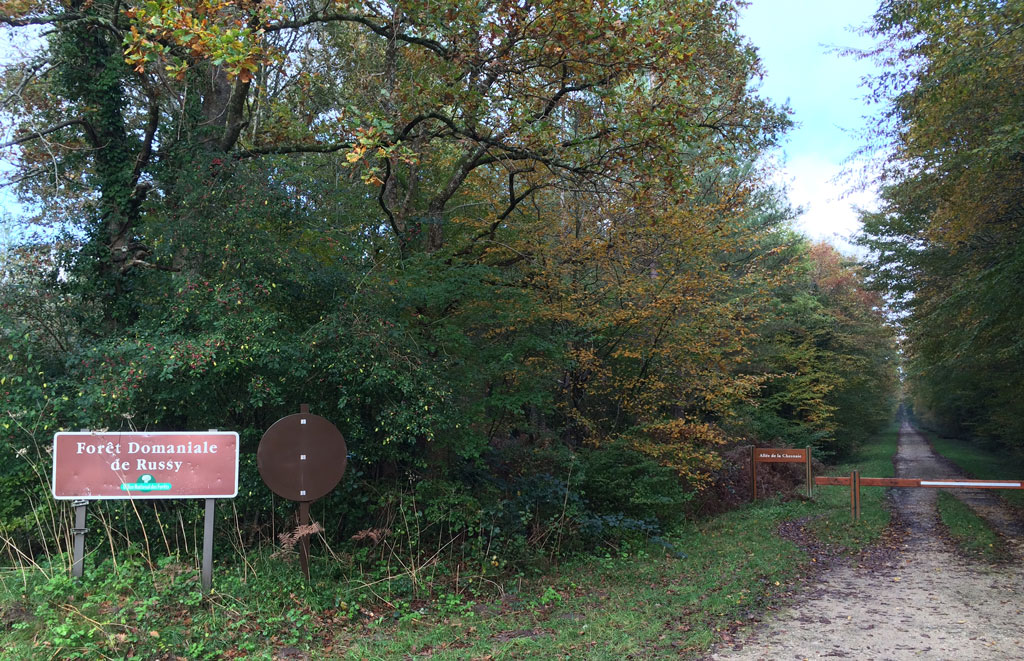 State forest or forêt domaniale where foraging is allowed

We quickly get back into the car and drive off. I can’t believe that anyone would be that devious. If he doesn’t want people on his property, all he has to do is put up a sign. But no, it’s obviously his favourite sport in autumn when he has no work to do on his cereal farm. We certainly won’t be back there again. We’ll make sure we go to a forêt domaniale next time.

This entry was posted in Loire Valley, Mushrooms and tagged mushroom foraging in France. Bookmark the permalink.