When Relationnel first mentioned mushrooming, he said you had to get up at the crack of dawn or there wouldn’t be any left. As our only free day was Sunday, I decided to give it a miss. I am not an early bird. But a few years later, the Serbian man who runs the Pergola, a restaurant with a wonderful outdoor eating area along one of our favourite cycling paths, dished up freshly picked wild mushrooms. He told us he’d picked them in the country the afternoon before. Ah ha! Afternoon, not dawn, you will note. So I put mushroom picking on the next Sunday’s  agenda. 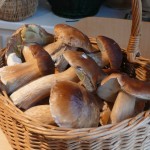 Relationnel checked out the lie of the land in a forest about an hour north of Paris. It seems mushrooms grow best on slopes with southern exposure.  He always knows things like that. The weather was fine, about 12 or 13°C and sunny. We waded through acres of knee-high ferns just turning brown at the approach of autumn without finding anything like a mushroom. I didn’t know I had all those thigh muscles before. Not that I really knew what I was looking for. I’ve learnt since that it takes about ten or fifteen minutes to get your “mushroom eyes” working. Edible mushrooms usually blend in remarkable well with the foliage around them. Each type of mushroom also has its own particular habitat so you have to learn to identify the different types of trees and shrubs.

We eventually came to a pinewood and Relationnel excitedly called me over to take a look.  Here was this cute little brown mushroom a couple of centimetres high with a darker cap and a thick stem. “Tête de nègre” (negro’s head) it’s called, would you believe it. He carefully cut it off at the bottom of the stem. You should avoid pulling mushrooms out by the roots if you want to find more in the same place the next year. And Relationnel has this amazing capacity to return to EXACTLY the same place, even a couple of years later. I’m more like Hansel and Gretel. I wouldn’t even be able to get out of the forest again on my own!

He turned it over and showed me the part under the cap which looks kind of spongey. That’s the way you identify boletus mushrooms. They’re called pores. The only variety I’d seen in Australia were agarics, which have gills under the cap.  You may have come across the boletus in your culinary travels. The best known specimen is  called porcini in Italy and cèpe in France. The wonderful thing about the boletus is that it’s never poisonous.  There are a couple of varieties that are bitter.  I’ll never forget the time we spent a whole afternoon collecting, then cooking, an amazing number of boletus with slightly pink pores, but had to throw the lot away after our first taste! Turns out they’re called bitter boletus. There are one or two others, easily recognisable, that will keep you up all night, but none are lethal.

Mushrooming is now one of my favourite activites, particularly in the autumn and right up until New Year (I once found chanterelles under the snow), but I’ve learnt to spot summer boletus, parasols and field mushrooms when we’re cycling in the summer. My biggest find was on cycle path along an old railway track. I found a boletus about 30 centimeters in diameter that I baked in the oven. Absolutely delicious! Anything we don’t eat, we freeze, so we can have them all year round.

Have you ever been mushroom picking?

Check out more on www.rogersmushrooms.com and watch out for the next post on Trumpets of Death.