I would just like to point out straight away that poeliste is not a real word but it amused my Solognot neighbour Alain no end. We are thinking of putting a wood-burning stove in our downstairs living room (as I mentioned earlier this week) and the stove installer recommended by Alain came round to give us a quote. 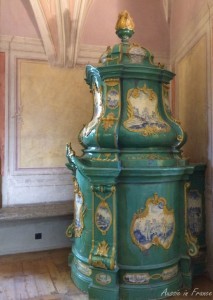 One of several porcelain stoves in Meissen in Germany – un poêle.

The French for wood-burning stove is poêle from the Latin pensilis, meaning suspended, from the verb pendere, to be suspended, which gave pendent and pendulous in English. Pensilis may seem far removed from poêle, but remember that an ê in French often indicates that an “s” dropped out. In this case, the “n” got lost as well.

Initially it designated baths suspended from vaults and heated underneath in all those rich Roman villas. After that it meant a heated chamber and eventually the cast iron or earthenware stove we know today.

When poêle means a stove, it’s masculine. But listen to this. When it means a frying pan, it’s feminine. Same spelling, same pronunciation and everything. But it doesn’t come from pensilis. It comes from patella meaning a small dish. Patella first became paielle then paele and maybe poesle (1579) which would explain today’s poêle. A small frying pan is a poêlon, which of course is masculine. How we’re supposed to remember that I don’t know. 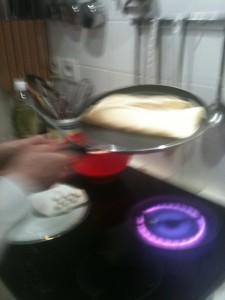 I based my use of poêliste on fumiste (from fumée, smoke) which means heating mechanic and also chimney sweep, although the more usual word is ramoneur.

But fumiste has another meaning – a shirker. I asked Alain why but he didn’t know. Good old Wikipedia came to the rescue. Apparently it comes from a vaudeville show called La Famille du fumiste about a heating mechanic who wasn’t the sort of person you could really count on!

The noun fumisterie whose real meaning is a heating mechanic’s workshop now has the same derogatory meaning as fumiste. C’est de la fumisterie means it’s a fraud. So I’m hoping our poêliste is not a fumiste or I am going to be cold all winter …

This entry was posted in French language, Uncategorized and tagged Friday's French, fumiste in English, poêle. Bookmark the permalink.