My Weekly Blogger Round-Up hasn’t been very regular recently but I’m hoping things will start to return to normal soon. This week, it begins with a new blogger whom I discovered through Lou Messugo’s link-up last week. Susan from Our French Oasis introduces us to the huge churches that are monumental landmarks in Charente Maritime where she lives; Mary Kay from Out and About in Paris shares some some surprisingly modern photos of 4th century AD mosaics she took in Sicily, while Sara from Simply Sara Travel takes us to Malbork Castle which she visited during a day trip from Gdańsk in Poland. Enjoy!

by Susan from Our French Oasis, born in England and now living with her family in Charente Maritime, passionate about fishing, nature and food, eager to share the pleasures of living and eating through the Seasons and the simply beauty that surrounds us in everyday life. 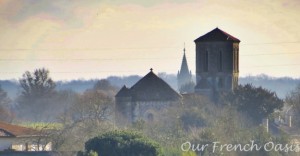 Every day I take the same route to school. I leave our village and take the long straight road that cuts its way through open farmland, climbs a gentle sloping hill and then slithers down into the valley where in an ancient village a narrow bridge across a small river forces cars to cross alternately in single file.  Each morning the old lady who lives in the old stone house on the corner by the river-wall will open her shutters and upstairs windows to let the air in – come rain or shine; it is a route I am coming to learn well.

The seasons transform the landscape too, as it changes from fields of sunflowers in summer to bare ploughed soil in winter.  The light flickers moodily and the weather caresses and spits, depending on its whims.  But there is one thing that remains unchanged –  on a centuries-old skyline are the spires and towers of the area’s many churches. Read more 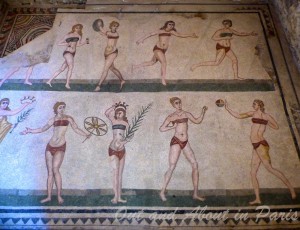 Wouldn’t it be incredible to unearth photographs from the fourth century AD imparting little-known details about ancient Roman life? We would learn about the clothes worn for an outdoor banquet, games that children played and revered mythological creatures.

Unique for their narrative style, vivid colors and range of subject matter, the Unesco-listed Roman floor mosaics at the Villa Romana del Casale also give a rare glimpse into the daily life of the man most scholars believe to be the former owner of the sumptuous villa, Marcus Aurelius Maximianus, Rome’s co-emperor during the reign of Diocletian (AD 286-305). Read more

by Sara from Simply Sara Travel, a girl from New Jersey who traded in her bagels for baguettes and moved to Paris. The aim of her blog is to inspire readers to travel, embrace a new culture, and open their minds to new perspectives. 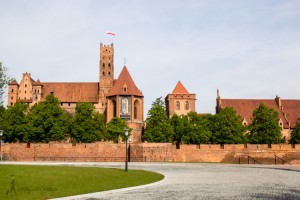 I have to apologize. I’ve done a bait-and-switch of sorts. Here I was last week, giving a teaser of our time in Gdańsk, and the only thing I’ve revealed so far is one of the side-trips we took from Gdańsk to the beach town of Sopot. The Jersey Shore parallels excited me, what can I say? (If you missed it, read more in my post on how Sopot is the Atlantic City of the East.)

My apology is going to seem a bit empty in a moment though, because instead of getting to Gdańsk, I’m again going to divert over to our other day trip we took while in the area: to Malbork Castle. The truth is that as I try to grasp all we did in Gdansk, there are so many elements and facets to this city that I want to share, and it is overwhelming! But I will get to it soon, I really will.

Today though, it’s all about Malbork Castle. Read more