Posted on September 20, 2015 by Rosemary Kneipp

As promised, Paola, our lovely hostess at La Casa di Paola e Marco, the B&B where we are staying in Noventa Padovana near Padua, gives us scrambled eggs, ham and cheese for breakfast so we are ready to start a hard day’s cycling. We are off to the Brenta Riviera, with its Palladian villas between Padua and Venise. We park the car  at Stra in front of the first Palladian villa on our list, Villa Pisani, which looks more like a palace than a villa. 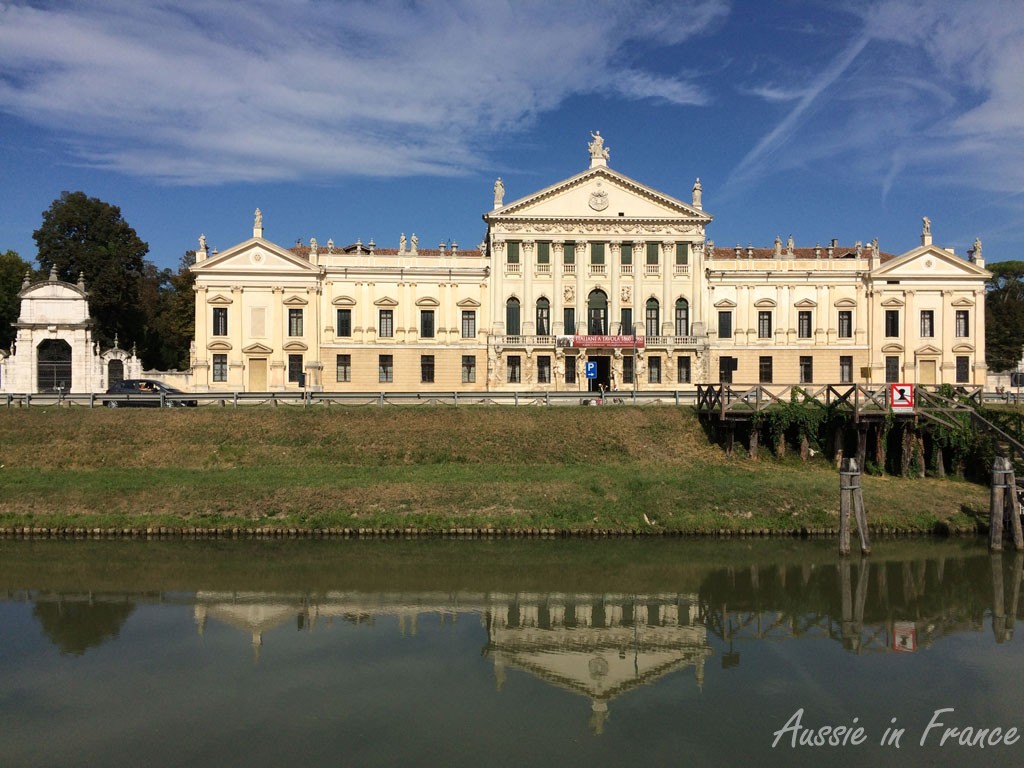 The front façde of Villa Pisani in Stra

Built in the first half of the 18th century, it has 114 rooms. We begin the visit at 11.15 and considering the size of the second villa that I can see at the bottom of the grounds, I make my way through the rooms quite quickly. 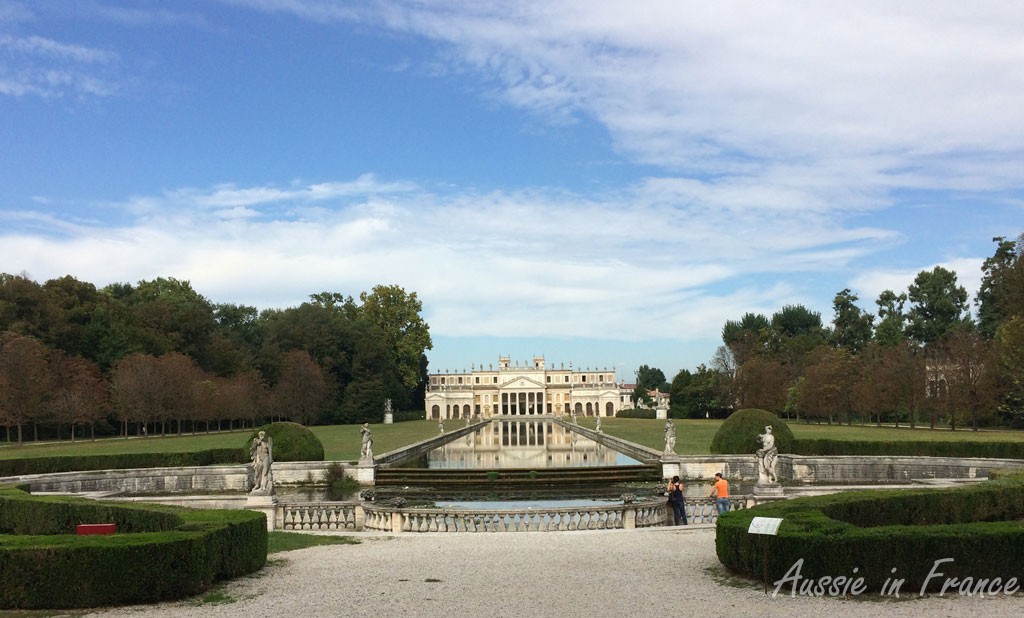 Some are richly furnished but the frescoes on the walls and ceilings are what really take the eye. They are quite sumptuous. 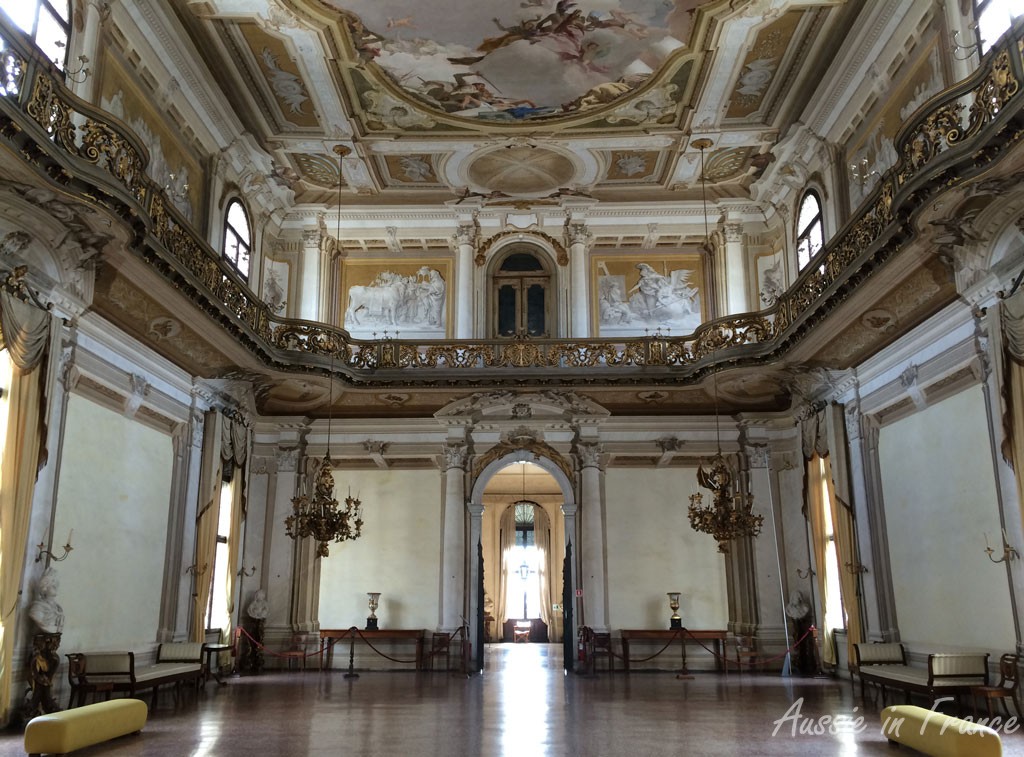 The Grand Ballroom at Pisani

It’s not until we get to the end of the visit that I discover that the second villa is not a villa at all but the stables, and designed soley to provide a harmonious view from the first building. It’s actually only one room deep! I think that is amazing. 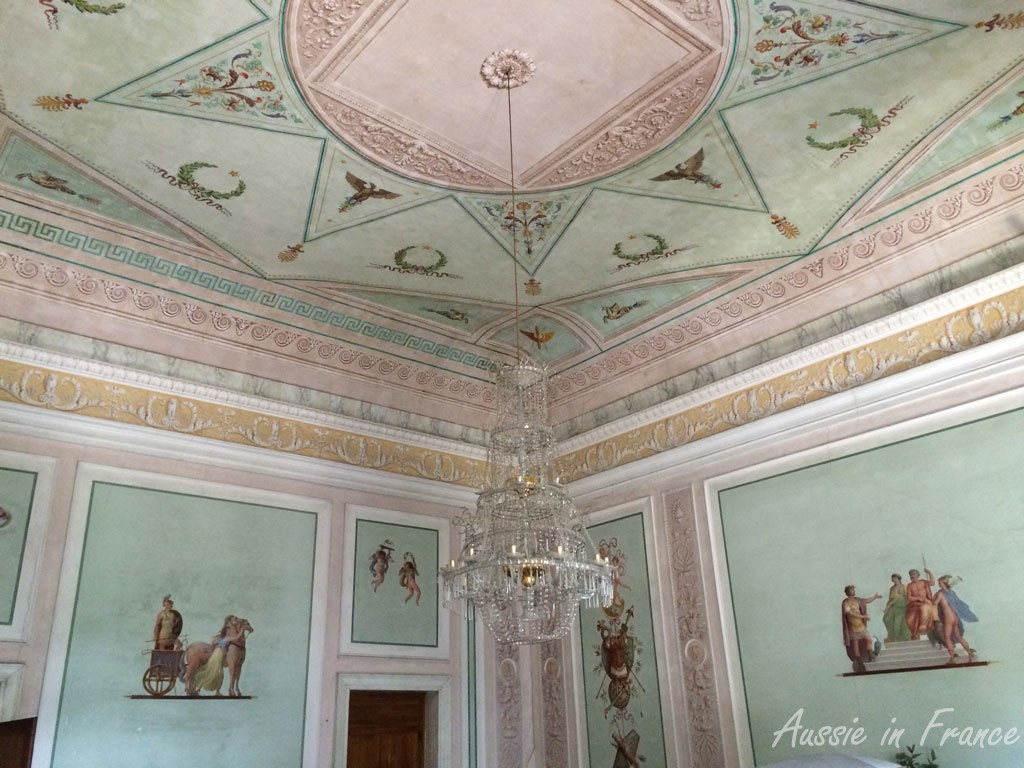 One of the more delicate ceilngs at Villa Pisani

Time for cappuccino so we walk down to the bottom of the gardens to the Museum Café which is in the old donkey stables. 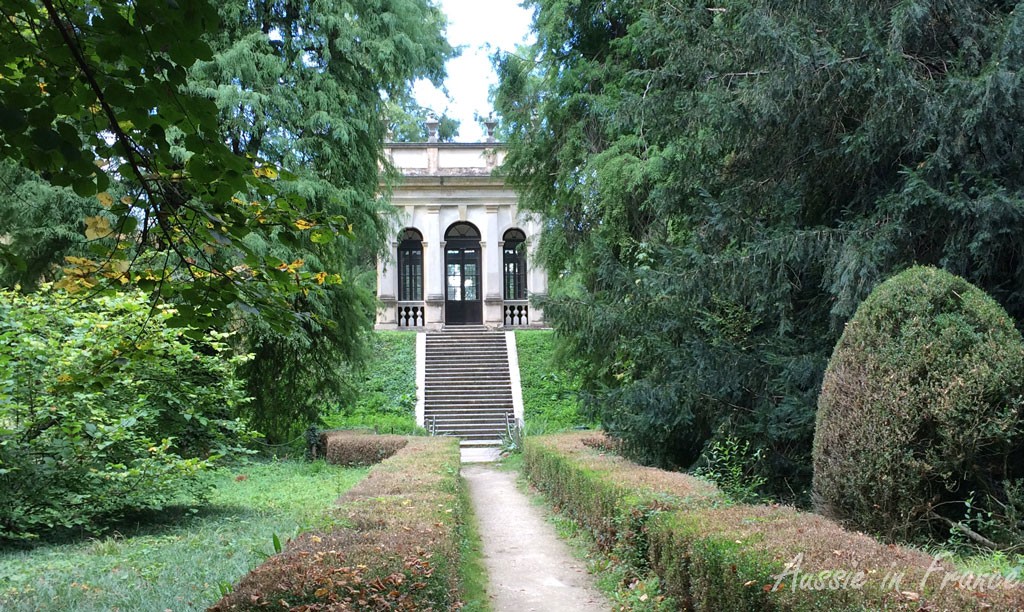 The Coffee House (ice-house) at Villa Pisani, an early version of refrigerator

On the way, we pass the Ice House, built at the same time as the villa and which served as a refrigerator in the summer back. During the winter, snow and ice were stored in the area under the man-made hill and used to keep food and drink cold throughout the hot summer. Holes in the ceiling provided air-conditioning in the room above where the inhabitants of the villa came to keep cool. It reminds me of the Tivoli Gardens near Rome. 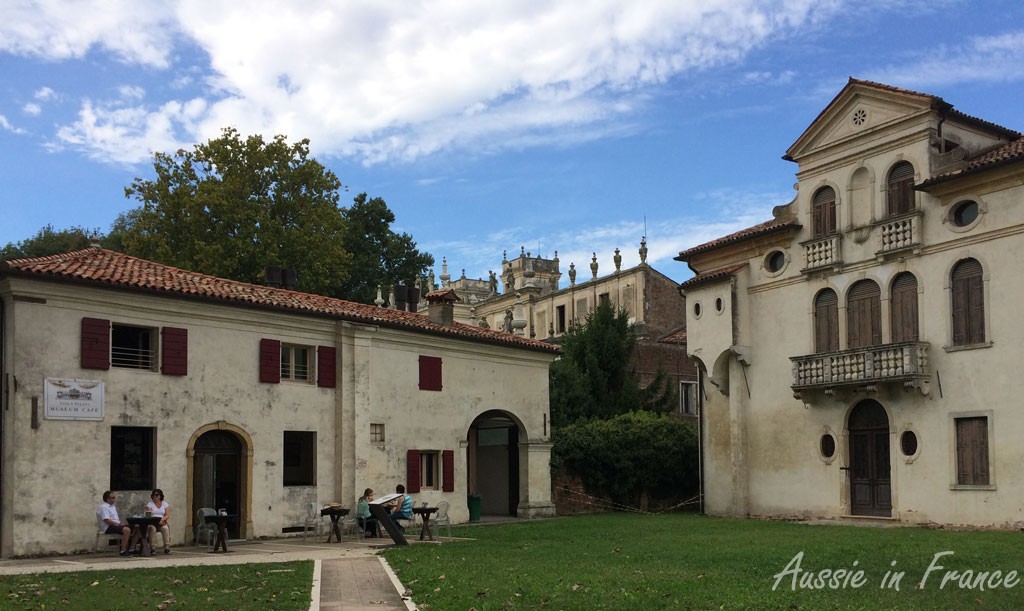 The museum café, in the donkey’s stables

We’re now back in the parking area which seems a good place to leave the car for the day. There is a group called Travel & Bike next to us so I ask the man running the show where the bike route starts because our map isn’t detailed enough. He starts directing me, then says, “Here take this map”. I show it to Jean Michel who suggests I ask for a second one. 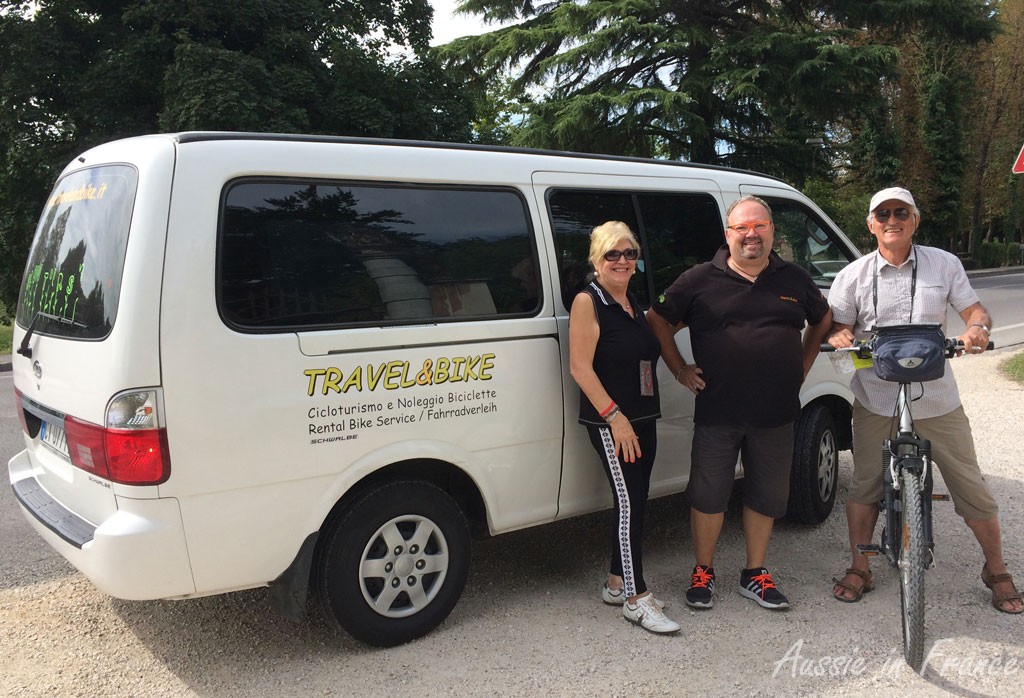 I wait until the T&B organiser has looked after all his cyclists , making sure they have what they need and that their bikes are properly adjusted, and ask him for another one. He’s still in a bit of a hurry so asks his mate to give me one. By now it’s nearly 1 pm. 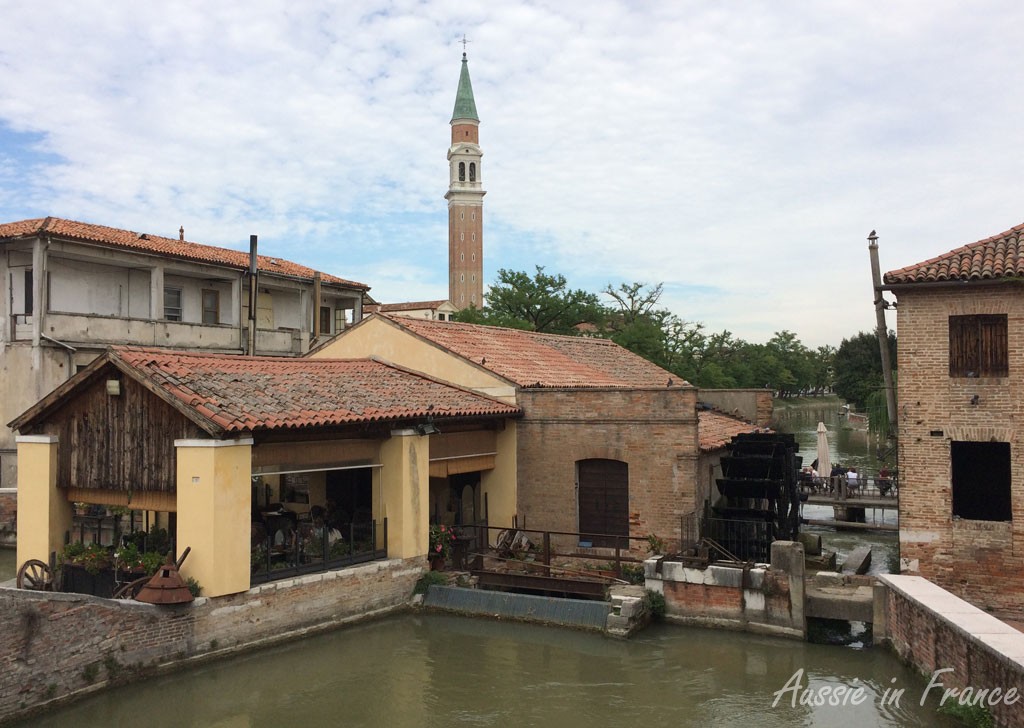 The back of the watermill in Dolo

We lock the car and set off, as instructed, passing in front of the villa and down to the bridge 300 metres away. When we arrive at the end of the path, the Travel & Bike van is there. The organiser comes over and apologises for not taking more time with us earlier. He has a few suggestions to make : we should stop in Dolo where there is a 16th century watermill and old dockyard, leave the path at Malcontenta to see Villa Foscari, another Palladian villa, and then go the extra 5 k to see Venice from the boat terminal at Fusina. 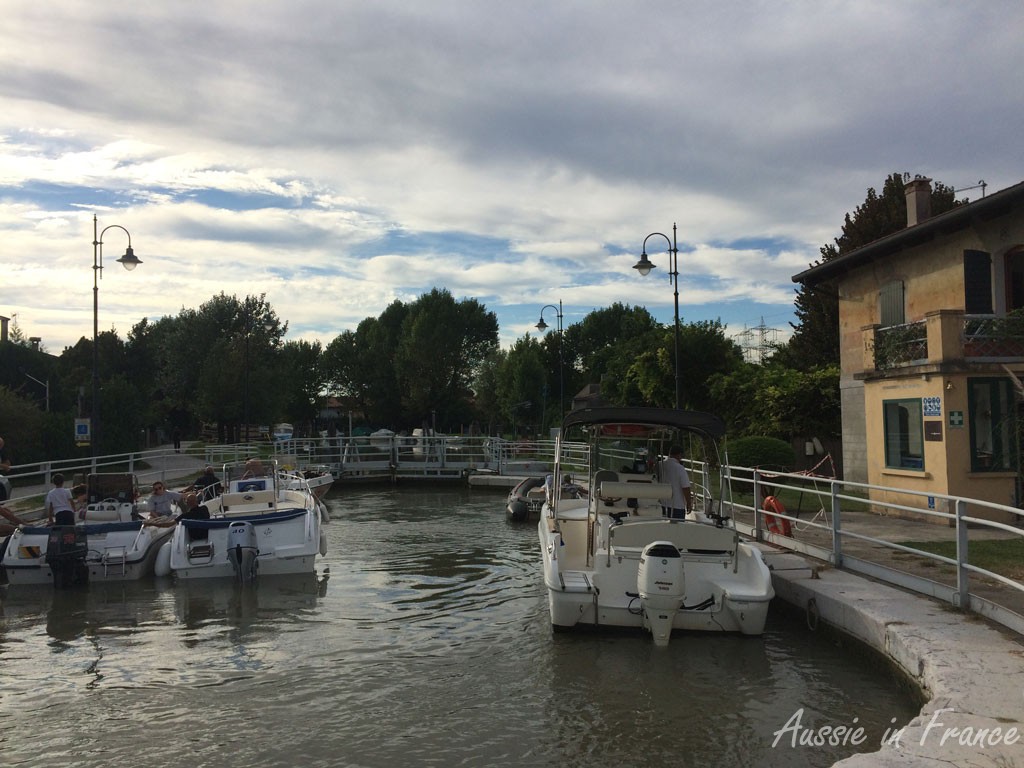 On the Brenta just before taking the main road to Fusina

His bike tour seems extremely well-organised. He’ll be picking up the bikes at Fusina so the cyclists can take the vaporetto to Venice. He already has their luggage as they’ll be staying overnight. 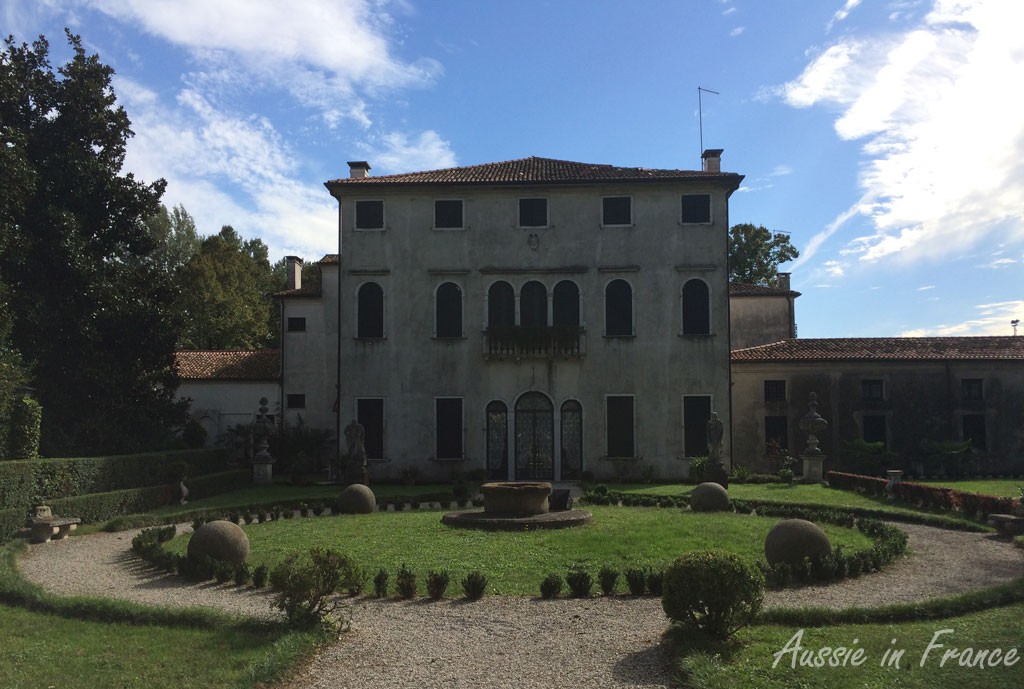 Villa Badoer Fattoretto closed after a tornado in July 2015

Meanwhile we are limited, once again, by the fast diminishing number of daylight hours. It’s already 1.30 pm. Our bike route takes us along the south side of the Naviglio di Brenta along a tranquil road, past many villas owned by rich Venetians, which explains why the area is called the Brenta Riviera. Some of the villas are in better shape than others, Villa Badoer Fattoretto, built in the 17th century being one of the better ones. 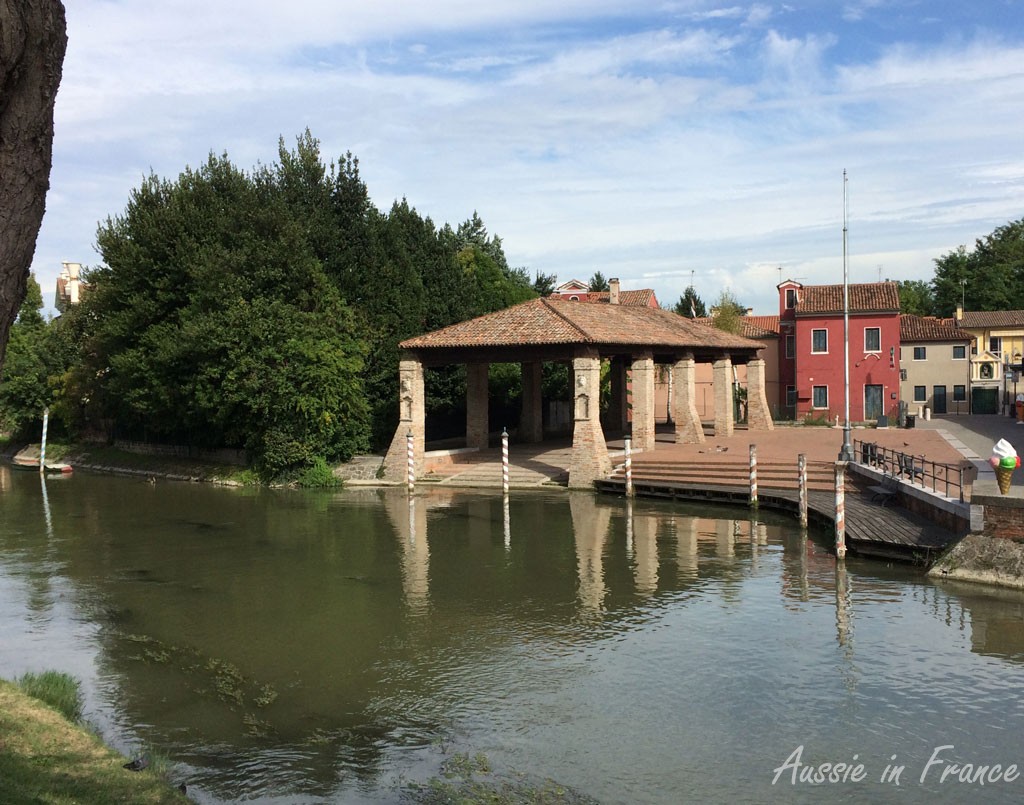 The old dockyard or squero in Dolo

We stop at Dolo as suggested and have lunch at the Mulino di Dolo restaurant on the little esplanade which has a view of the dockyard (squero)  and church. 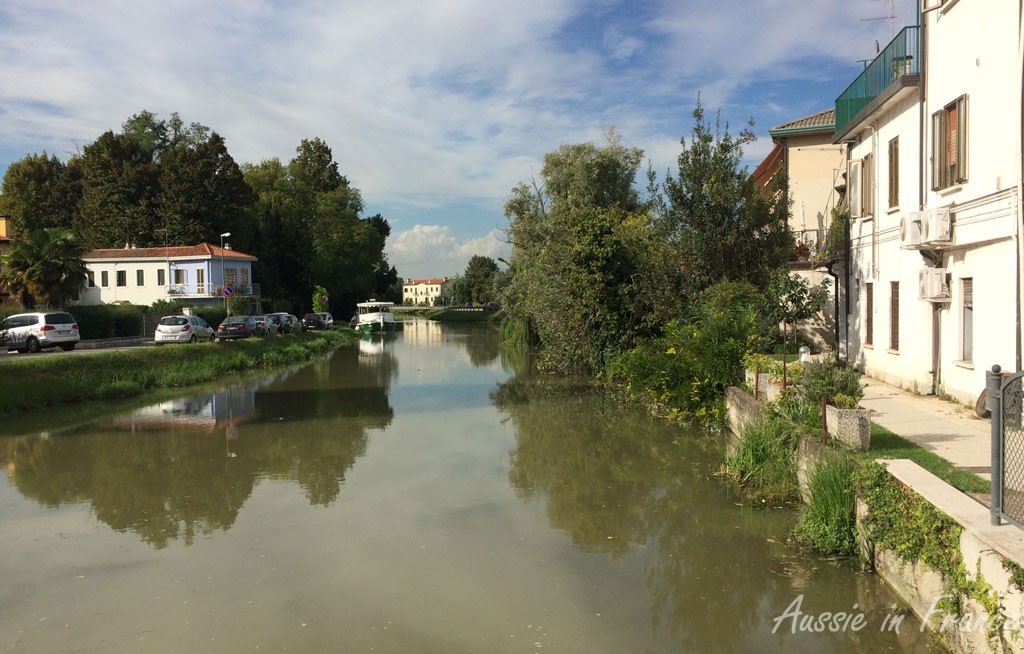 Along the Naviglio Brenta

After Dolo, the bike route runs along the river and we see more villas. The route takes us through Oriago until we come out on a main road. Fortunately the T&B organiser has explained where to go or we would have been lost! The group turns out to be just in front of us and we follow them to Villa Forcari a few hundred kilometers off the main path. 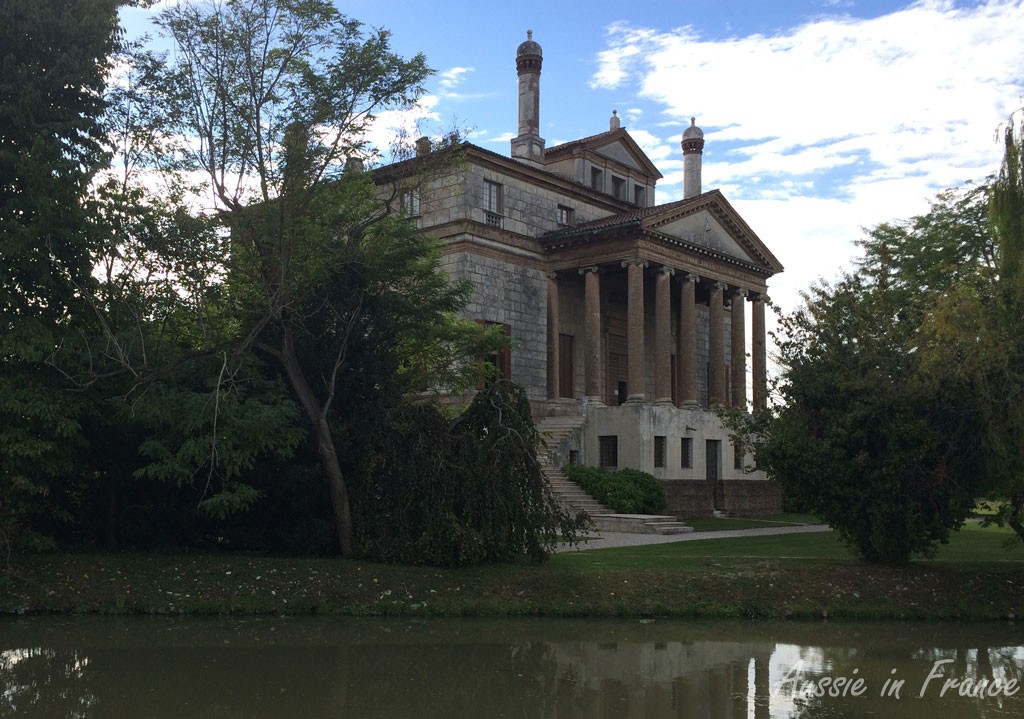 Unfortunately, it’s closed on Sunday afternoons but we are able to see it from the outside. Not that we would have had time to visit. 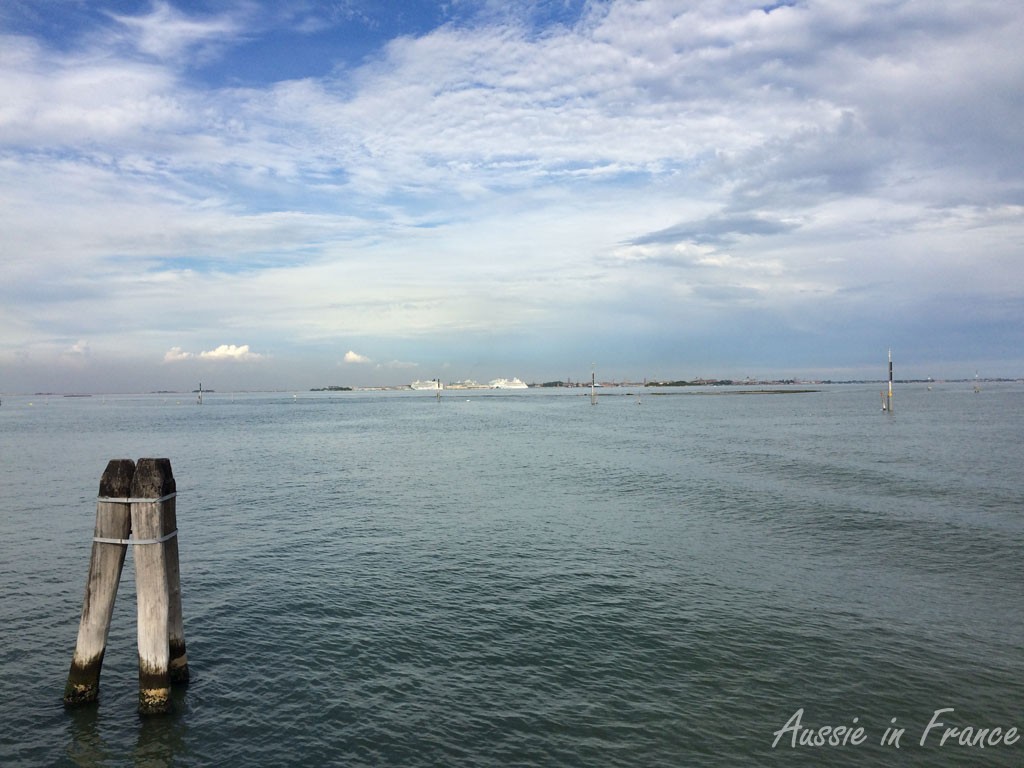 The remaining 5 kilometers to Fusina mainly run along the Brenta except for the last couple which take us on the main road leading to Fusina terminal. We arrive at the esplanade and can pick out some of our favourite places in Venice with our binoculars. We’re glad we made the extra effort. However, the 30 kilometers have taken us 2 hours and it’s 5 pm. Nightfall is at 7.15 pm at the moment … 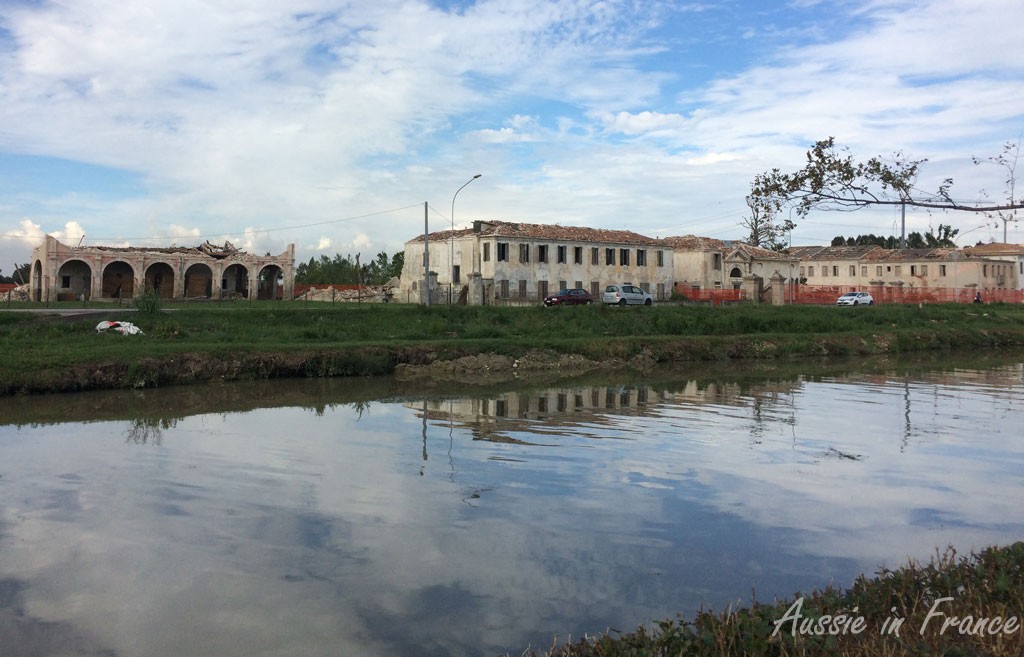 Some of the dilapidated villas along the Brenta

We start the return journey, intending to eat a gelato in Malcontenta where I spied a gelateria on the way. When we arrive, there is only one table left (out of two!) and it’s in the sun. The owner immediately sees the problem and moves the table. We go in to choose our gelati. “No”, she says, “we don’t have any ice-cream, only cakes”. Well, I am not a great fan of Italian cakes. so it’s a bit of a disappointment, especially after cycling for 25 K without a break  Jean Michel chooses one but I prefer to eat the biscuits we always carry with us. 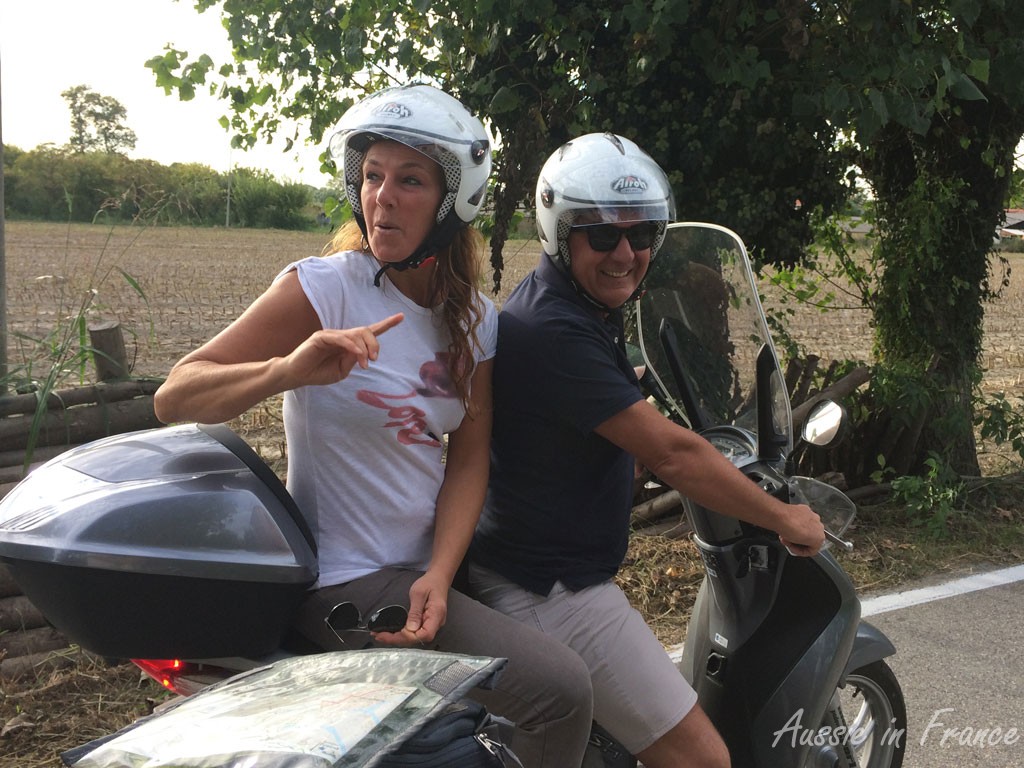 Paola and Marco on their scooter

There is an alternative bike route that skirts around Oriago and will save a couple of kilometers so we decide to take it. We’re cycling along the canal again when we hear a horn blowing behind us. We stop and who do we see – Paola and Marco from the B&B in Noventa Padovana! They’re on their motorbike bound for Venice for the evening. When they went past several minutes earlier, they thought it was us so doubled back. What a coincidence! 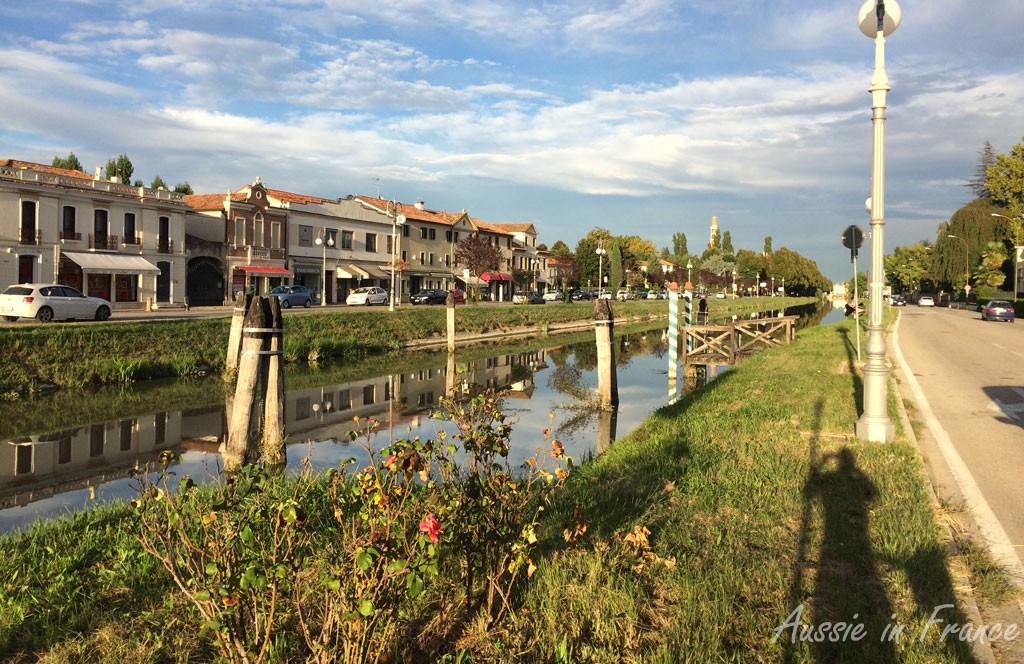 Along the bike path at Mira

At kilometer 43 out of 58, we come to a fork near Mira and I choose the right hand path. Jean Michel, who’s just behind, calls out “no, to the left.” I brake, without realising I’m on gravel and over I go. I try to save myself by getting free of the bike and only have a few grazes on my hands and knees. No holes in my pants, thank goodness. 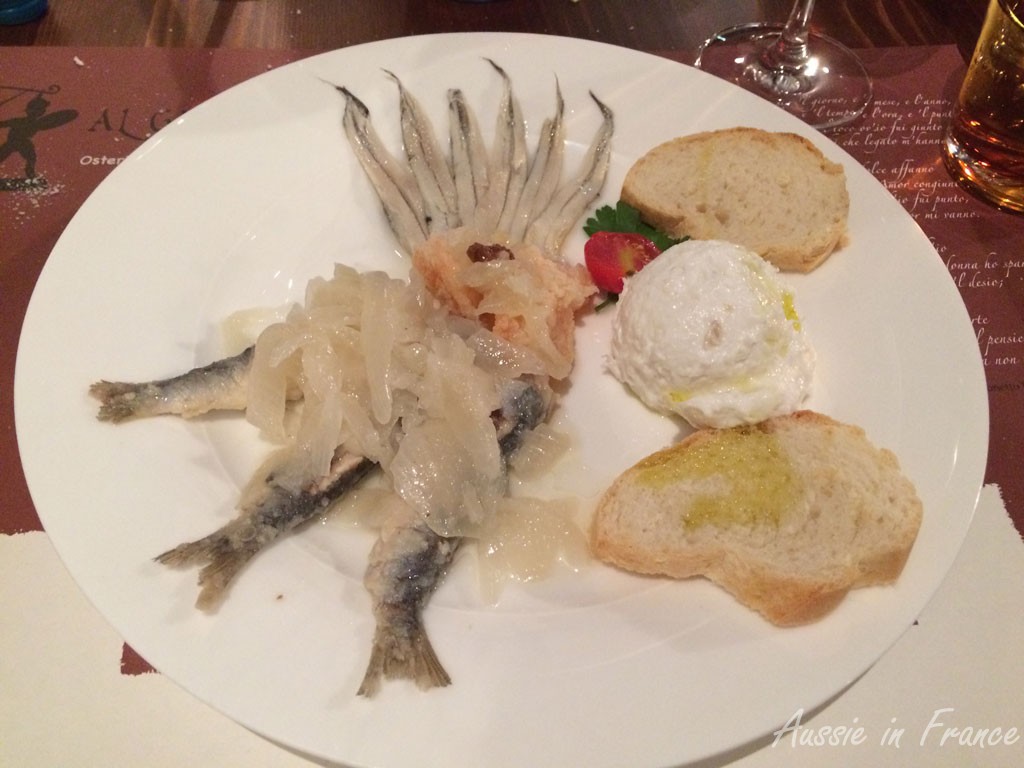 We get back to the car at 7 pm, just before nightfall. We arrive at our next location, Arqua Petraca, an hour later, just in time for an excellent – and well-deserved – dinner at the Osteria al Guerriero, run by the owners of the appartment we are renting for the next four nights. – Casa 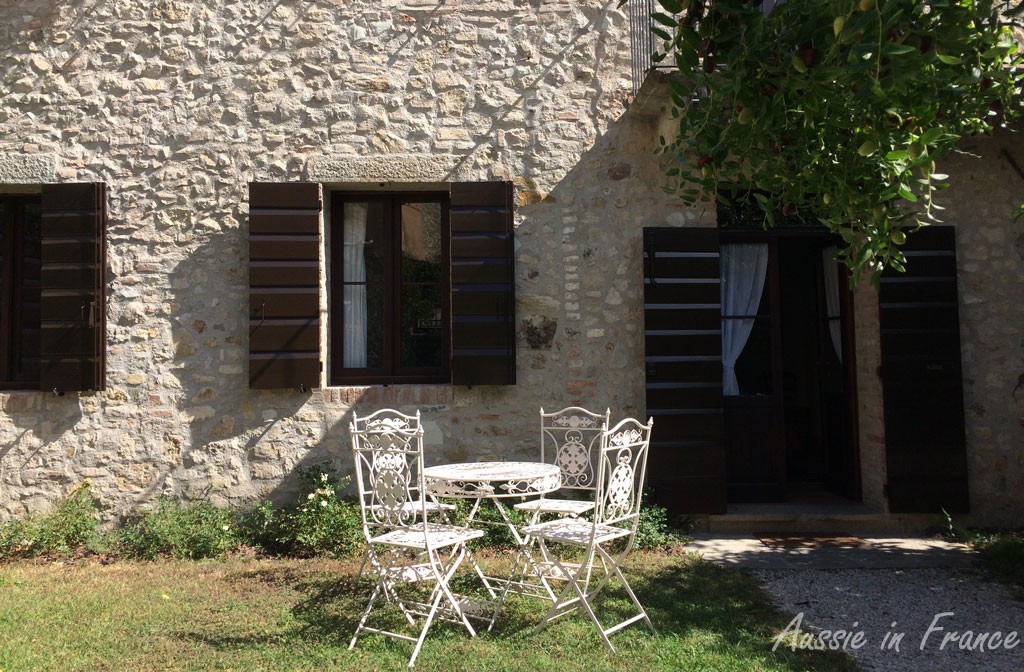 In front of our rental appartment in Arqua Petrarca

We are delighted with our accommodation – a 2-bedroom flat on the ground floor with our own table and chairs in the garden just in front. Tomorrow is a rest day and we’re pleased to at last have more space than just a bedroom.

This entry was posted in Accommodation, Architecture, Art, Cycling, Italy, Sightseeing and tagged cycling on Brenta Riviera, cycling to Venice, cyclng in Italy. Bookmark the permalink.