Cycling in the Veneto – Walled Cities and the Euganei Hills

Posted on September 23, 2015 by Rosemary Kneipp

After a rest day at our flat in Arqua Petrarca, the town where the famous Italian poet, Petrach, chose to spend his last five years (he died in 1374), we are back on our bikes. 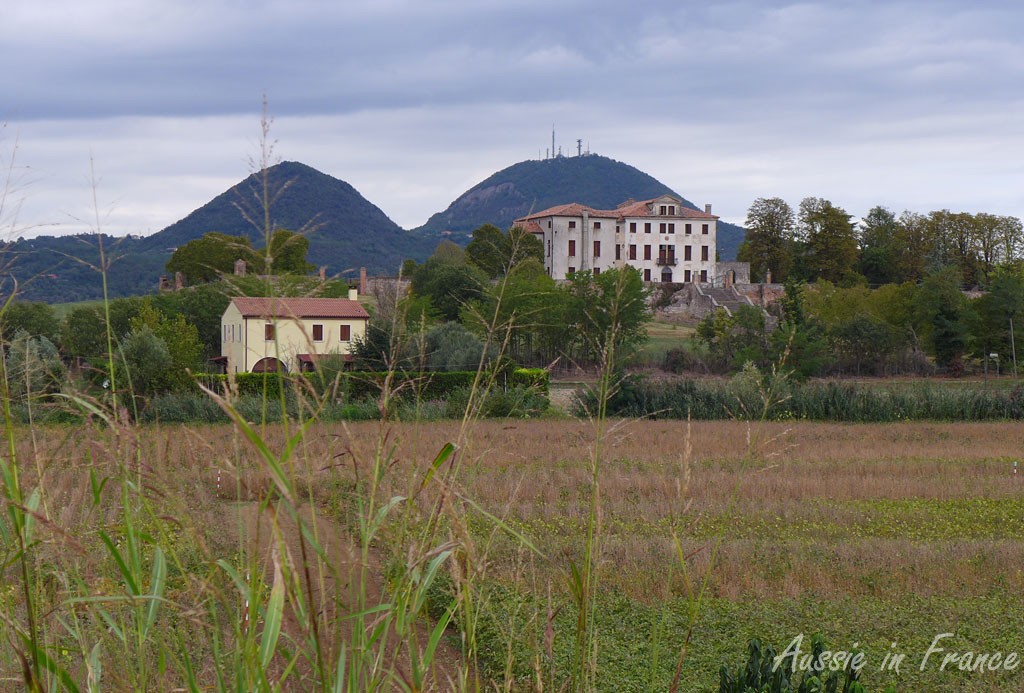 We’ve driven the 6 or 7 kilometers to Monselice and are following the official cycling itinerary that links up the walled cities of Monselice, Este and Montagnana and should total about 30 k. We set off on a sealed road along the Bisatto Canal which looks promising. 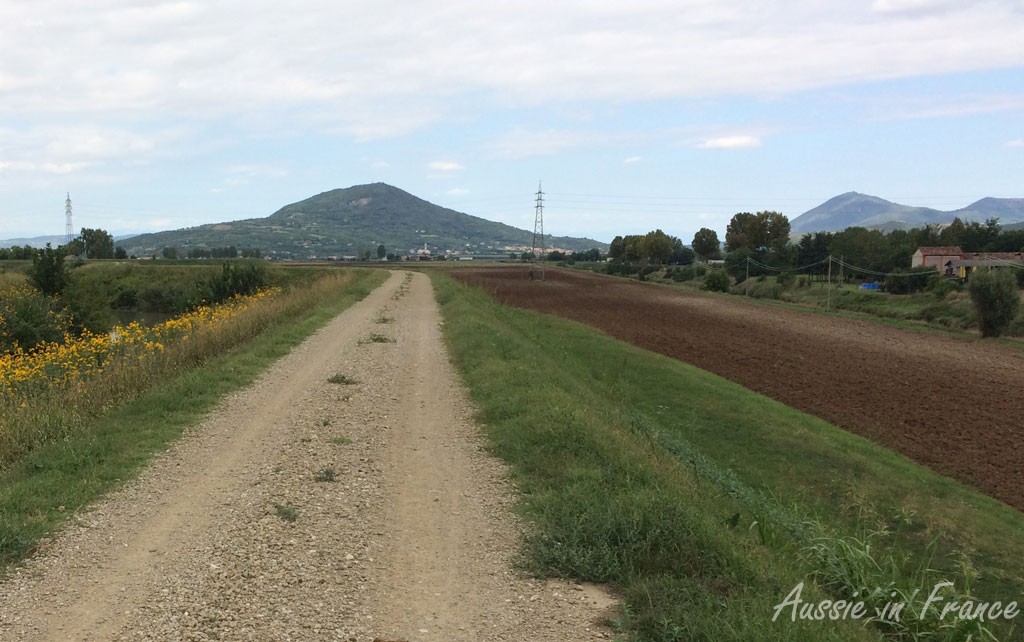 The easy gravel path along the Bisatto Canal

It lasts for 3 kilometers and then we are on a gravel road which soon becomes somewhat worse for wear. We come to a fork and see a big sign announcing the Colli Euganei route but nothing to indicate our road. We eventually find it after crossing a bridge over the Frassine river. 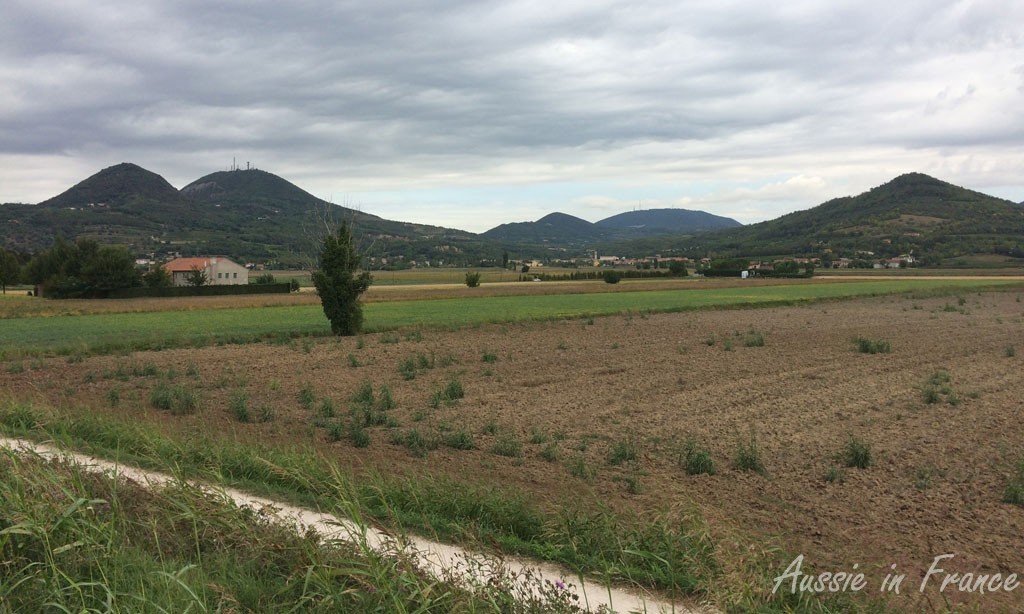 The narrow bike path with the Euganei Hills in the background

The bike road gets worse and it’s slow going but we have the Colli Euganei in the background to inspire us. 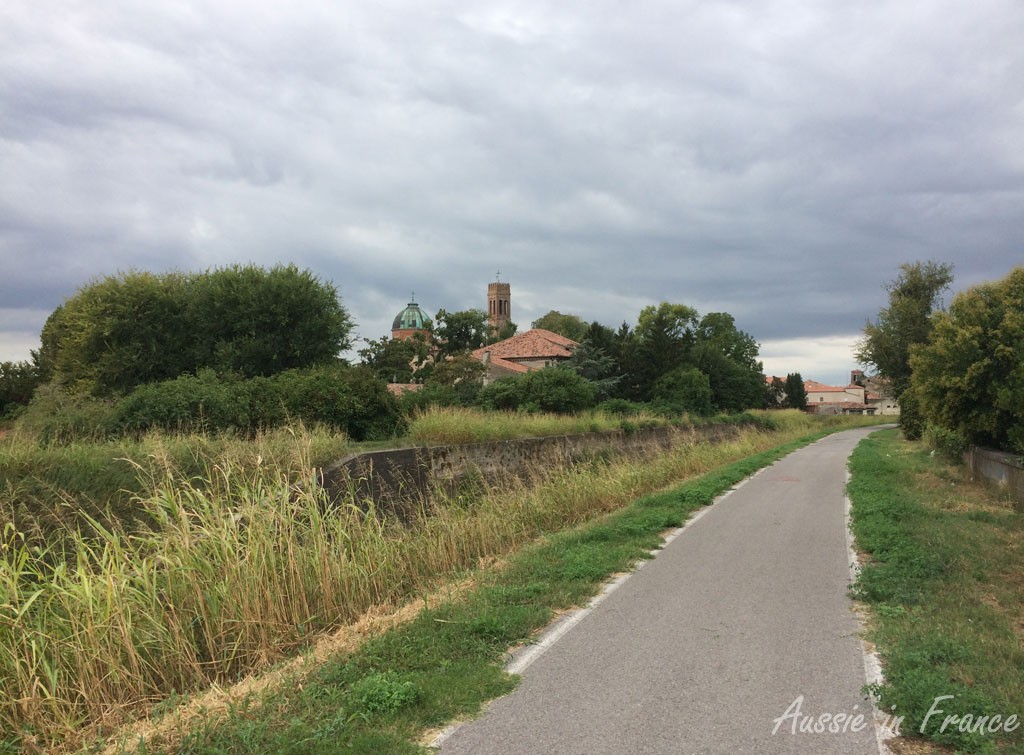 As we approach the mediaeval town of Este, about 10 K from Monselice, the road improves and despite the lack of sun, we appreciate the little town with its castle on one side and vast Piazza Maggiore with its municipal clock tower on the other. 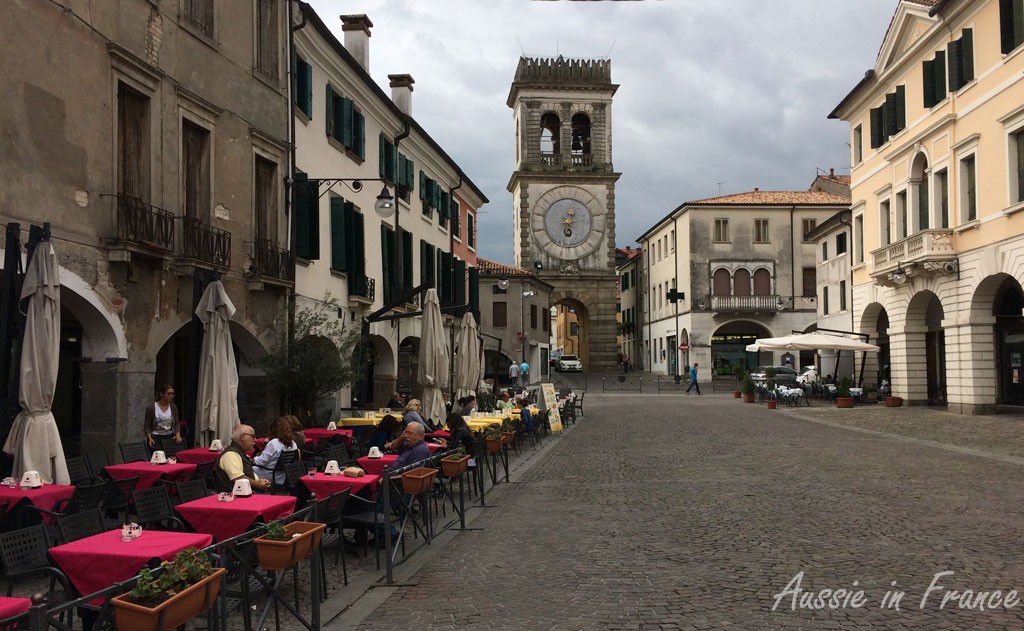 The town clock and main square in Este

We buy some food for lunch (it’s an intermittent fast day) and set off again. 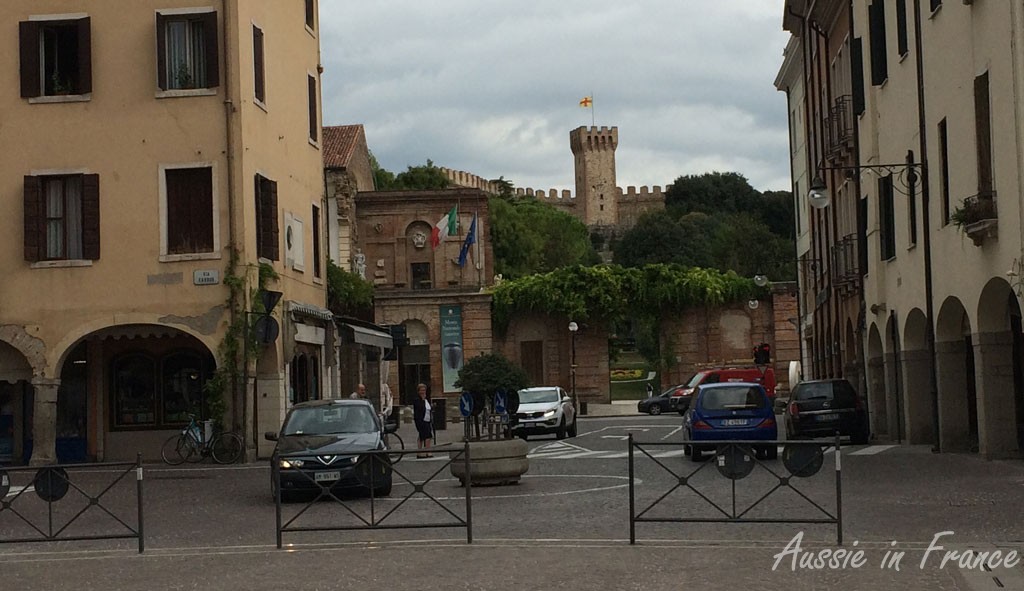 The castle in Este

After a couple of kilometers of sealed road, we find ourselves on another gravel road along the river which slows us down again. We come across two churches side by side, one little and old and the other big and new. We have our picnic on a low wall. There is not a soul in sight. 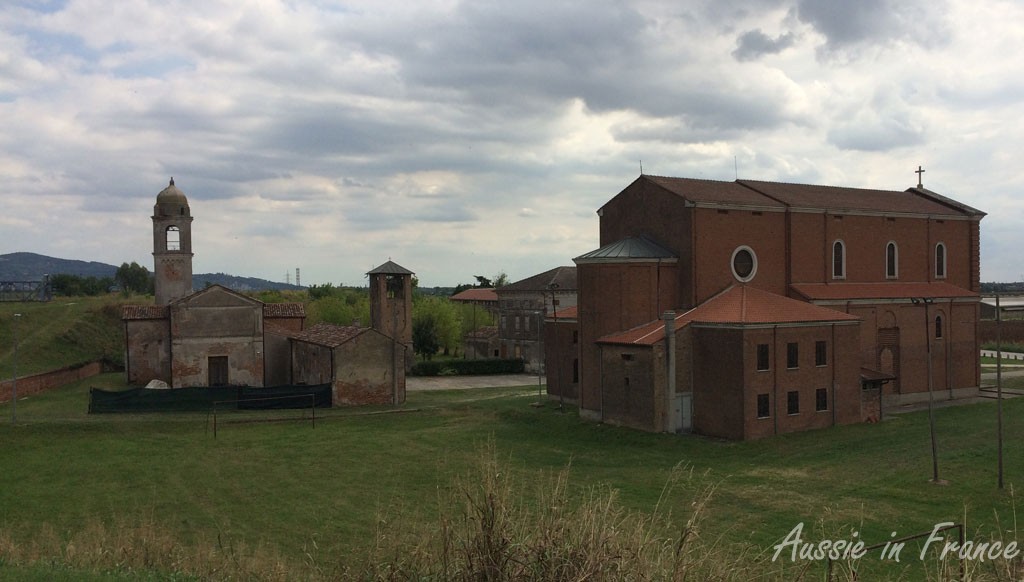 The little church and the big church

We continue the path along the river and it gets so bad that even Jean Michel, a truly seasoned cyclist, has to get off and walk part of the way because the stones are so big. We see a wild rabbit on the track that doesn’t run away until we’re practically on top of it. We eventually find a very steep stony road leading down to a sealed road and head for what we think is Montagnana. 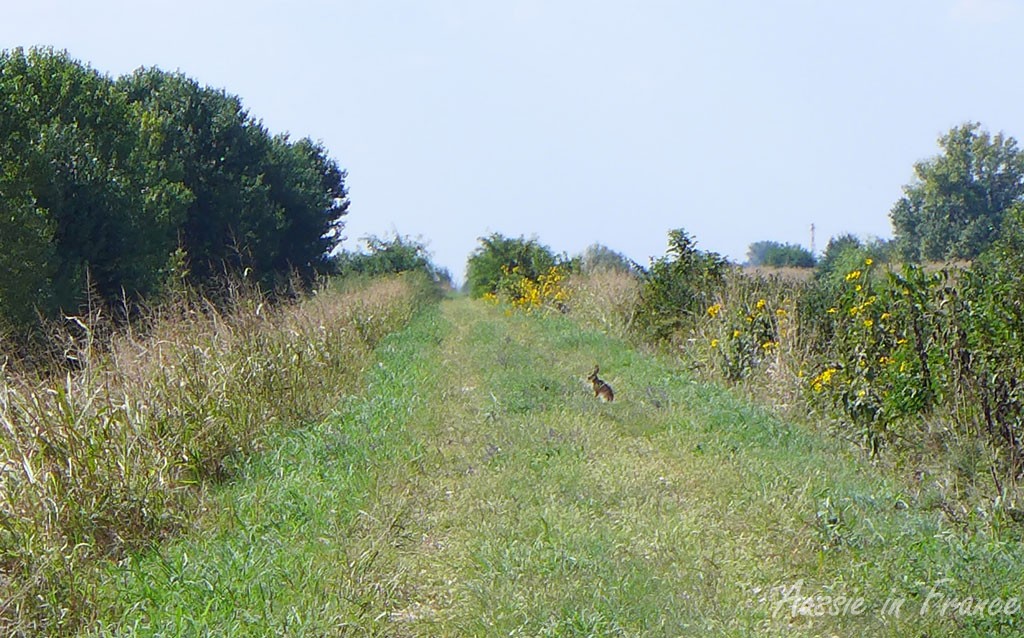 Rabbit on the track

On the way, we stop and ask a farmer what his crop is. Jean Michel, a true country boy, has been intrigued for some time about the local crops. Soy, we are told. Ah, that’s it. However, we later realise that the crop Jean Michel actually meant is tobacco. We keep going until we finally come to a town called Saletto that is not on our map. Hmm. 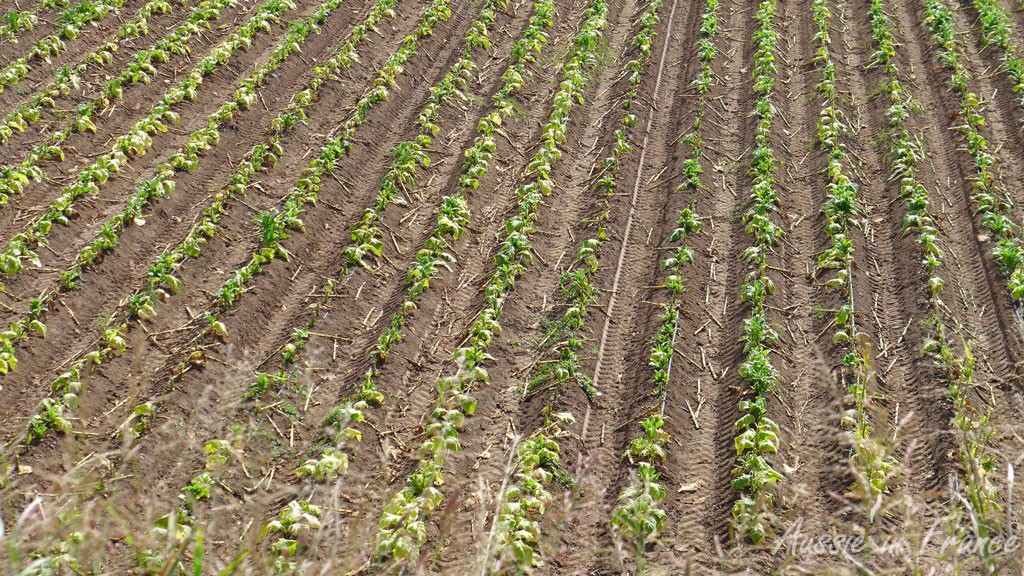 We ride around the town until we see a sign saying 6 k to Montagnana. We ride along a busy road with large trucks whizzing past us at 90 kph, cursing the people who dreamt up the itinerary. They were obviously not cyclists ! 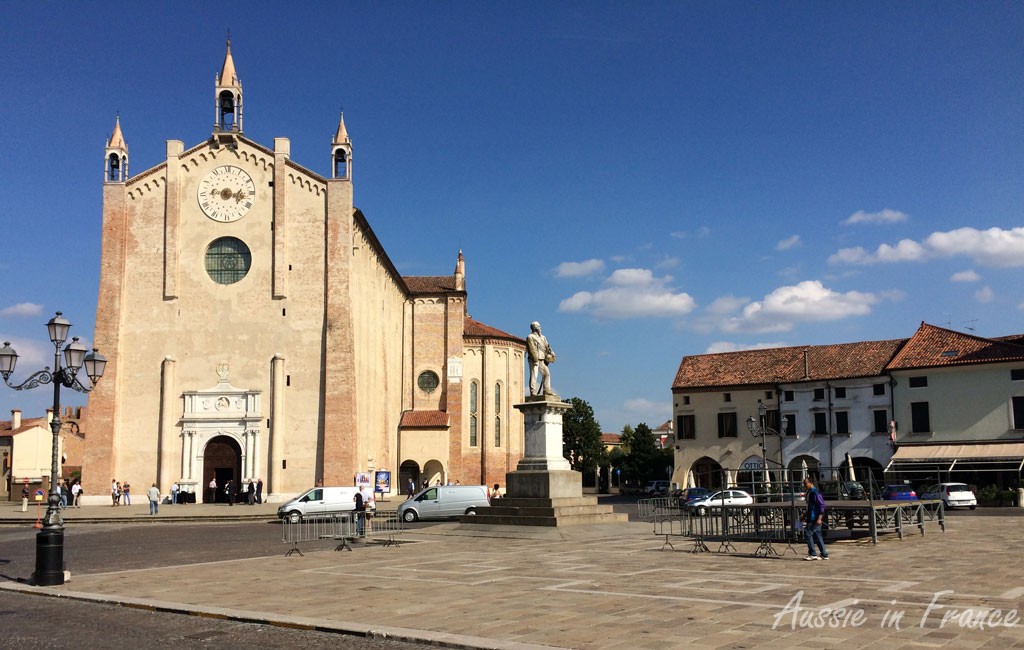 The cathedral in the main piazza in Montagnana

Montagnana turns out to be a 14th century walled city whose 24 x 17 metres high towers are still in perfect condition. We ride through one of the four gates and into the main square with its impressive cathedral and historical houses. There is obviously an important funeral going on so we don’t visit. 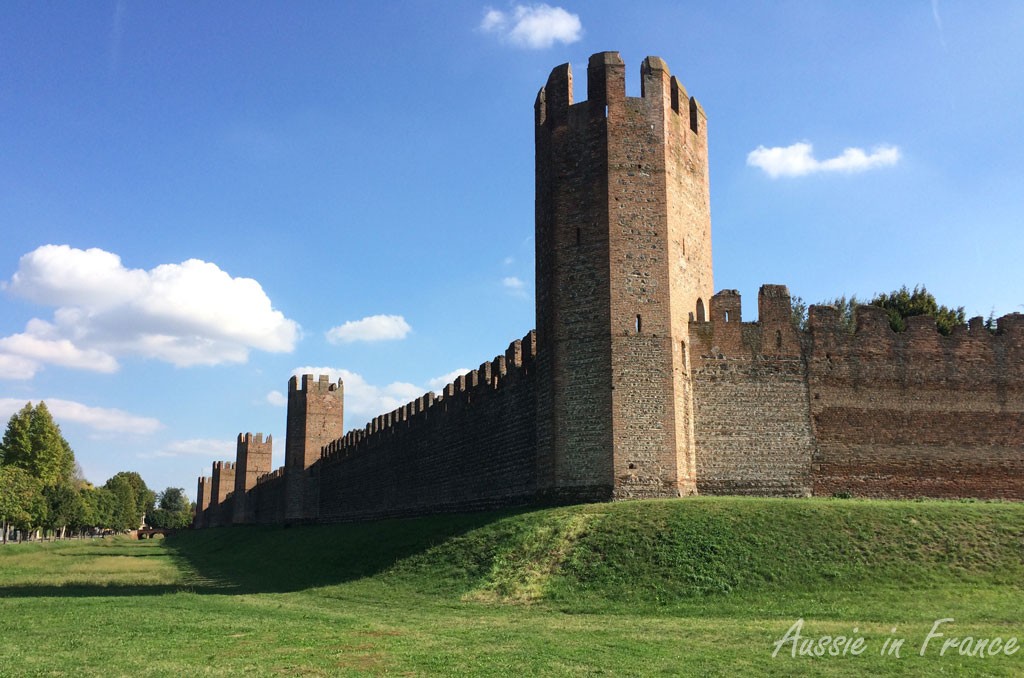 The walled city of Montagnana

We then ride halfway around the walls to have a more complete view of the town. By now, we have clocked up 39 k which is our usualy daily average. We still have to ride back again and it’s already 4 pm. We’ve identified an alternative route and are hoping it will be better than the official itinerary we have just taken. 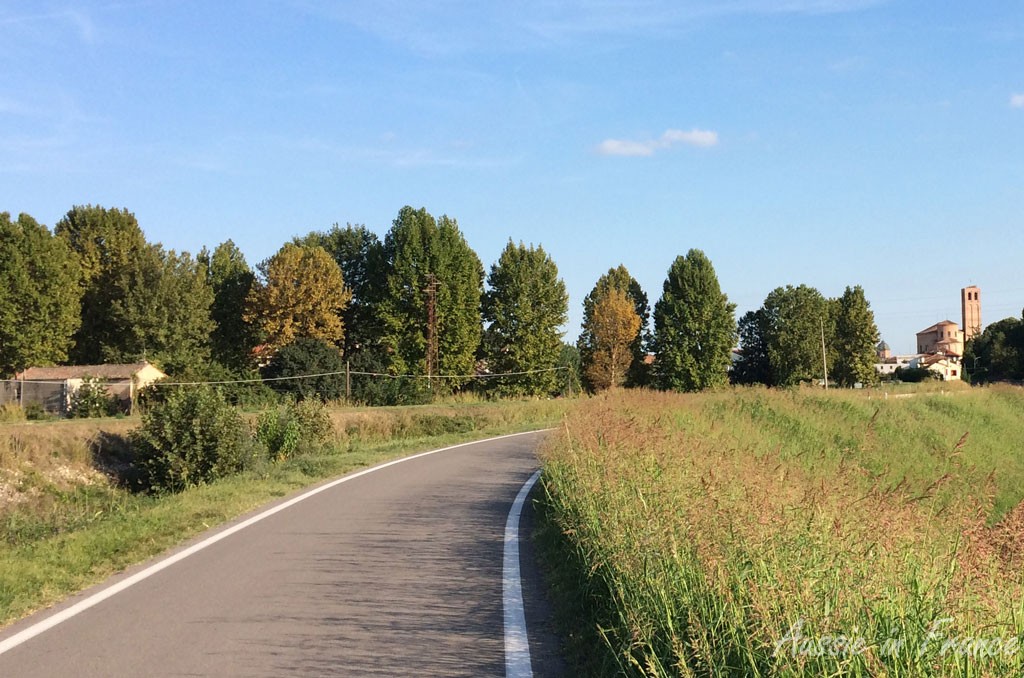 Our alternative route home with sealed roads and no gravel

As we ride past farms and tobacco fields on a quiet sealed road running roughly parallel to the gravelly river path, we wonder why on earth anyone would even suggest using the other one. Our road starts getting busier as it approaches the motorway and we debate whether or not to rejoin the gravel road (we’re about level with our picnic spot) or cross the bridge over the river and try the road on the other side. 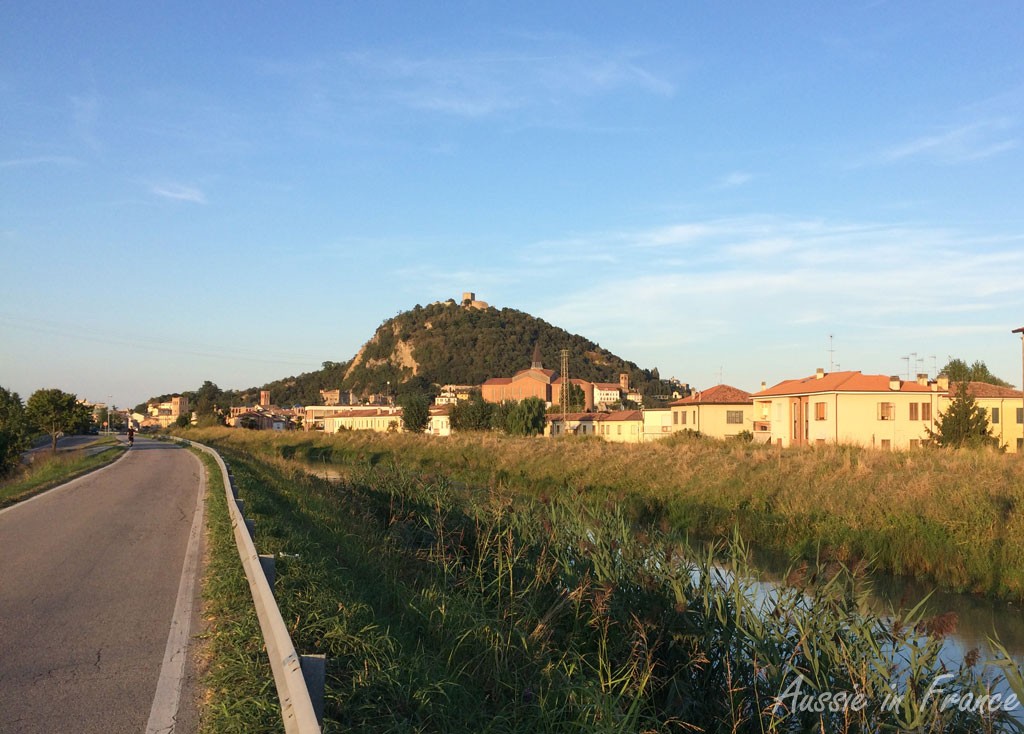 The hill on which Monselice castle is built

We vote for the alternative route and congratulate ourselves on our choice. We eventually have to leave the sealed road when it veers off to the left. We take another gravel road but this time it’s acceptable. When we reach the Bisatto Canal again, we have a sealed road once more. It’s then plain sailing until we reach the car. 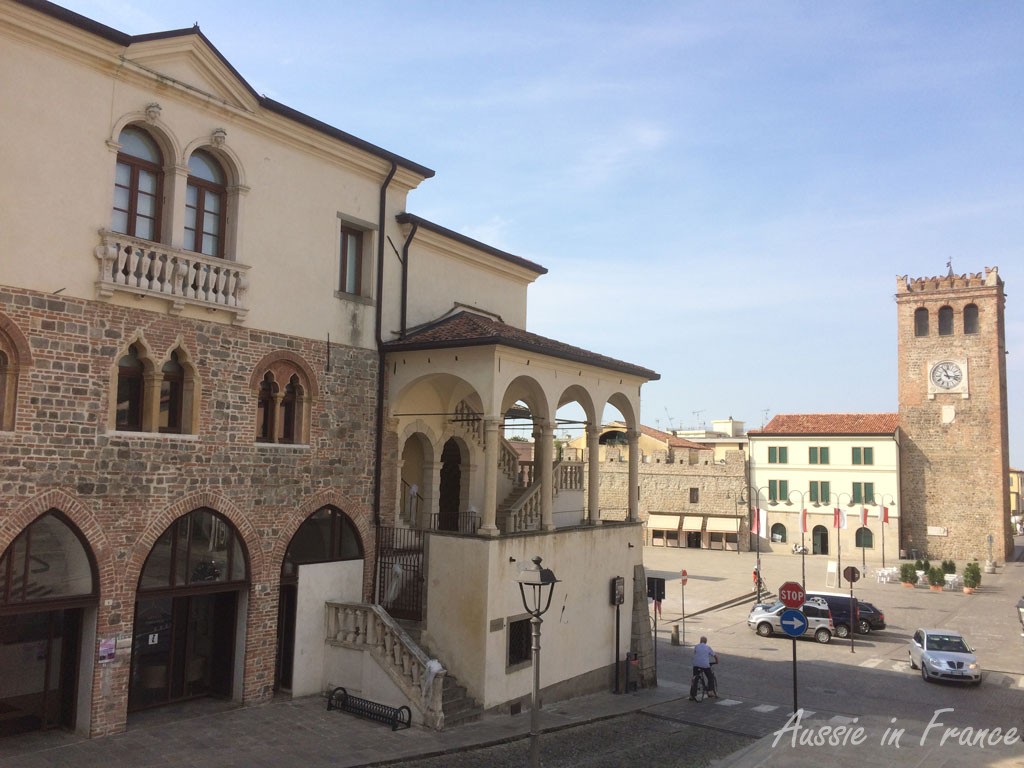 The town clock in Monselice

It’s next day and we’re feeling a little sluggish after our long ride yesterday so decide to drive down to Monselice which we didn’t have time to visit yesterday. 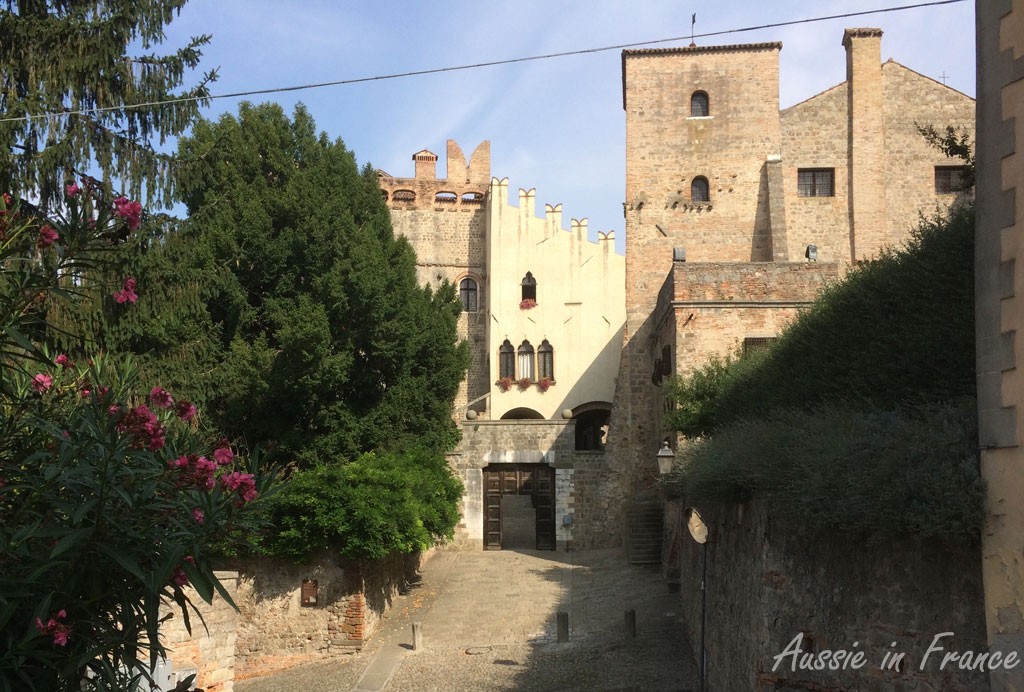 After a cappuccino and a pastry in what looks to be a favourite caffè with the local ladies, we explore the town. We walk up a side street to the Castello, a fortress dating from the Middle Ages and rebuilt in the 13th century. 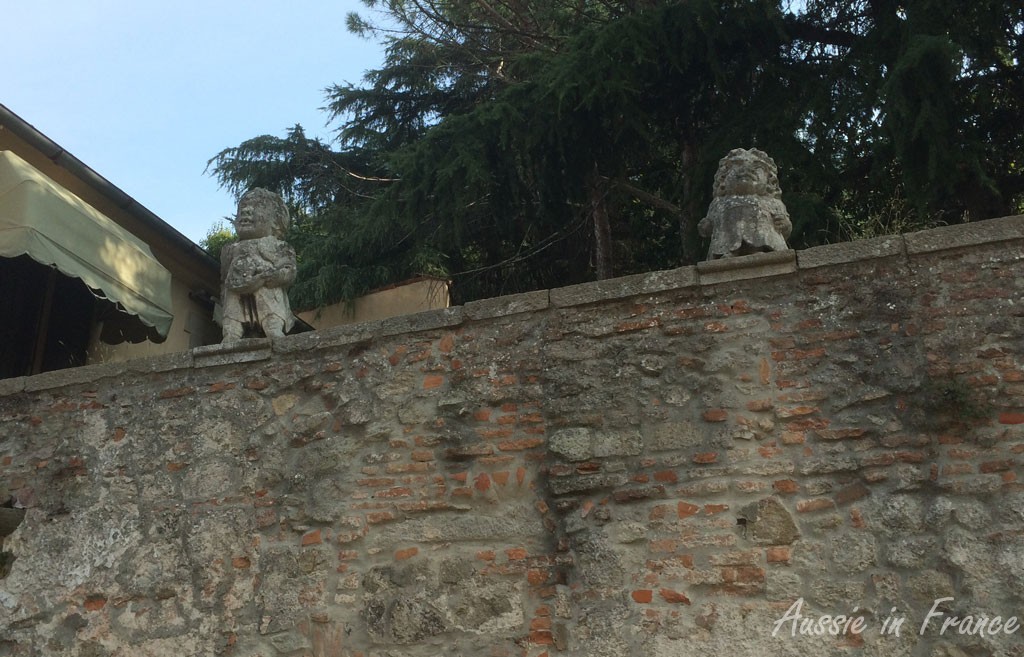 The dwarfs on Villa Nani-Mocengio

A little further up the hill is the Villa Nani-Mocengio, whose statues of dwarfs on the outer wall are most intriguing. They are an illusion to the noble family that commissioned its construction (nani means dwarfs). 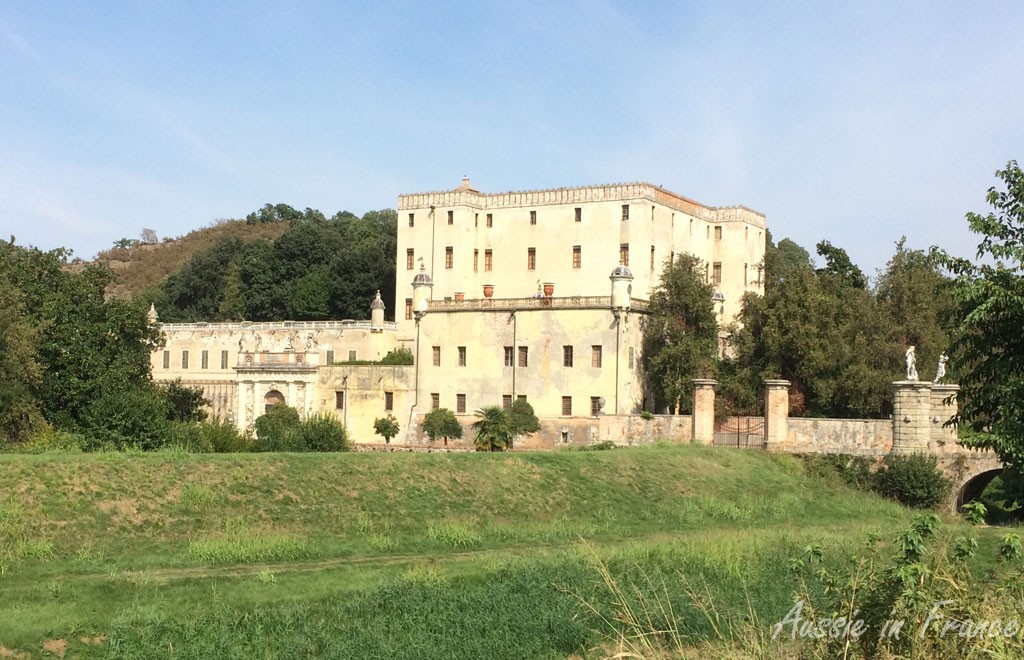 We have studied the bike route carefully this time and are avoiding any paths that are not sealed so we drive to Battaglia Terme 6 k away to leave the car. We take the incredibly comfortable sealed road along the canal to Montegrotto Terme past numerous vineyards and soy and tobacco fields not to mention to occasional castello. 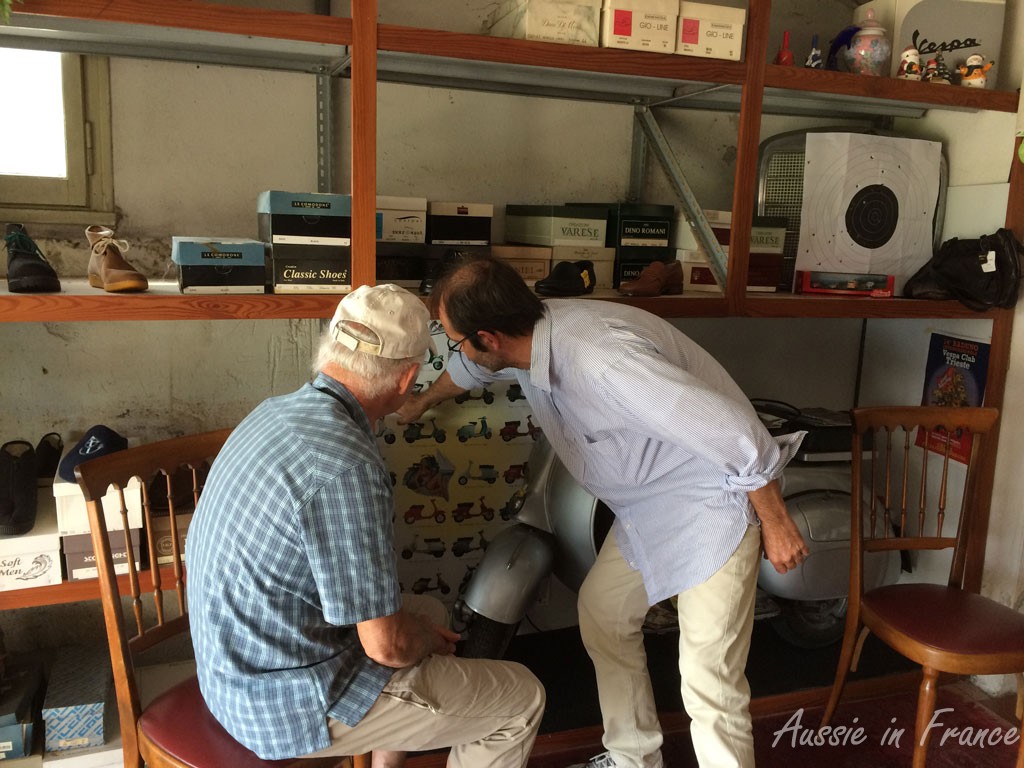 At the entrance to the town I spy a shoe repair shop and we stop to have the leather covering on my orthopaedic soles restuck – all in Italian, including a discussion about Vespa scooters between Jean Michel who speaks about 10 words of Italian and the shoemaker who is a self-proclaimed Vespa passionato. 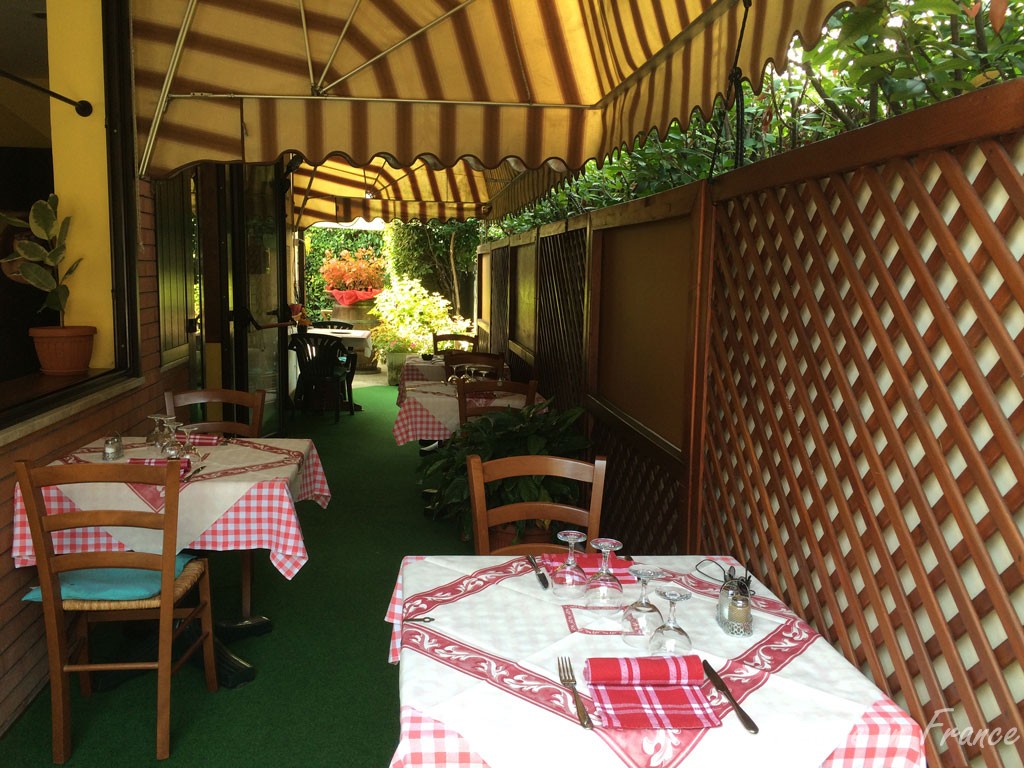 We continue into the town which is of absolutely no interest but we find a small osteria for lunch. The prices are the lowest we’ve seen yet – 6 euro for primi piatti and 8 to 12 euro for secondi. I ask what braciole is and am told it comes from the animal’s rib. Jean Michel immediately swaps from his mixed fish grill, thinking it’s rib steak. It turns out to be a small pork chop served with excellent chip potatoes. 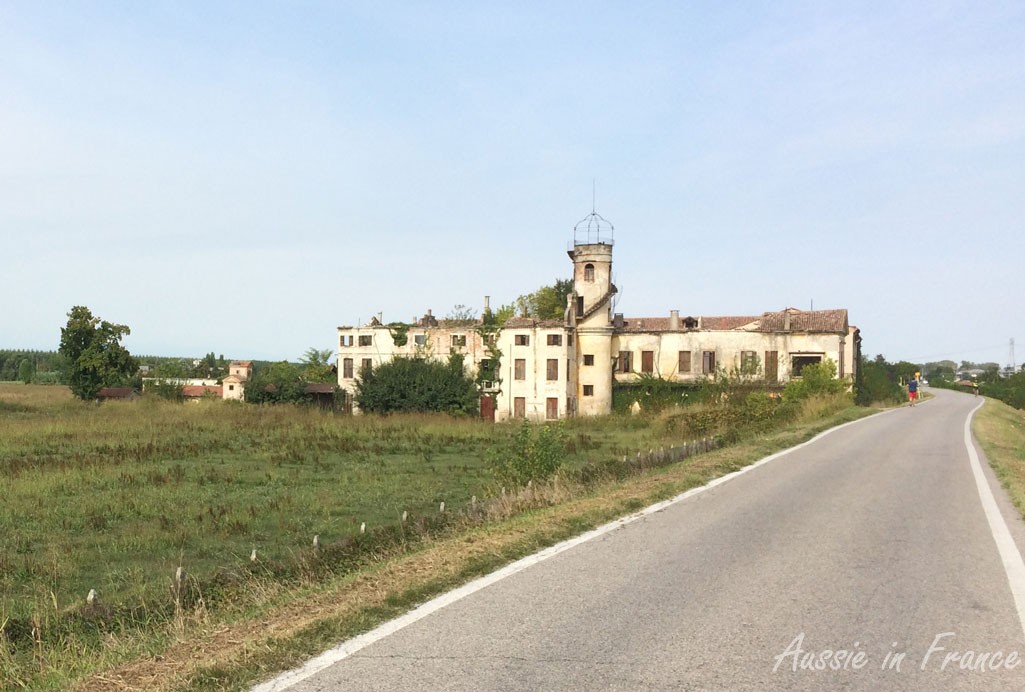 A delapidated building on the bike path

After also eating a side salad, we’re still hungry so order fusilli with basil and datterini, another new word for me. It means cherry tomatoes. Very tasty. 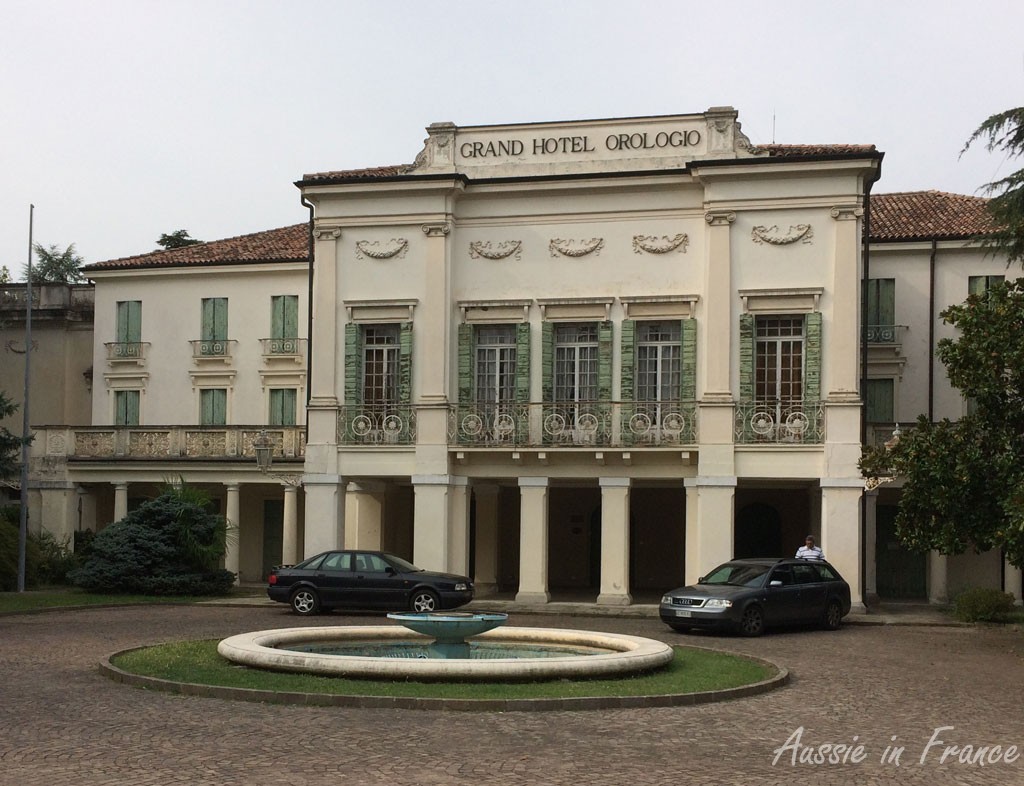 We then continue on to Abano Terme which I thought was just down the road. By the time we get there, once again on an easy sealed road, we’ve clocked up 20 kilometers. So much for an easy day! It turns out to be a spa resort with absolutely nothing to redeem it. I ask a policeman to direct us to the Piazza del Sole et Pace which the tourist office brochure indicates is of interest. He gives us directions and tells us we shouldn’t be riding our bikes in the centre. Hmm. 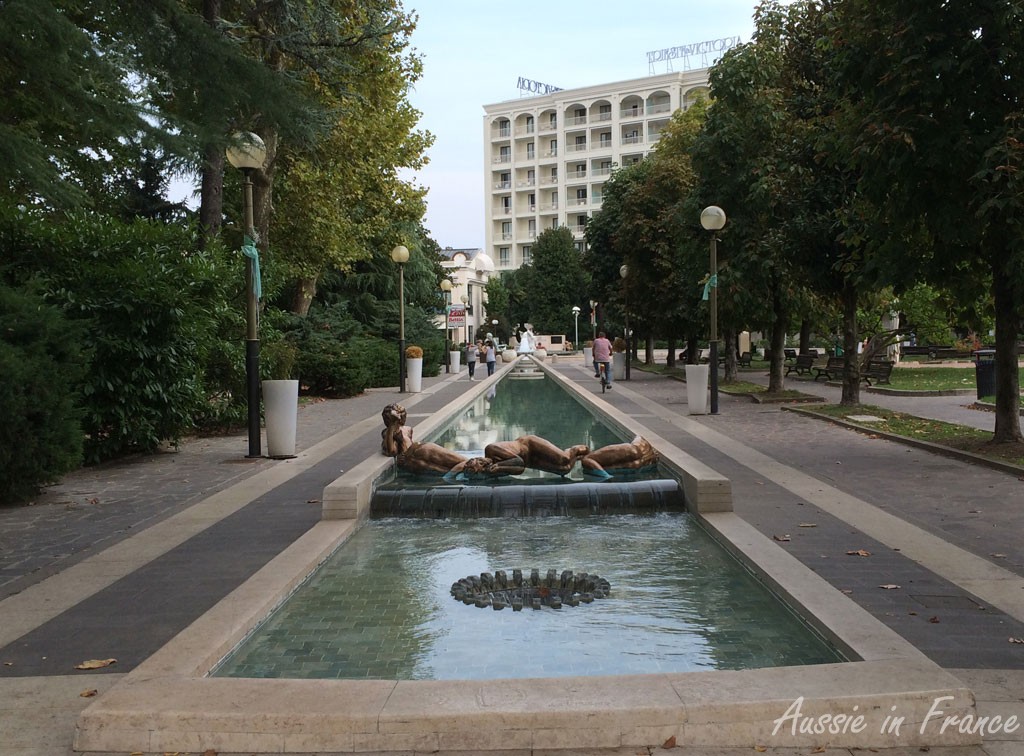 We decide to take the quickest route back to Battaglia for an ice-cream, then home. The ride along the canal is fast so we only take 2 ½ hours to cover a total of 49 kilometers, much better than yesterday’s slow going. 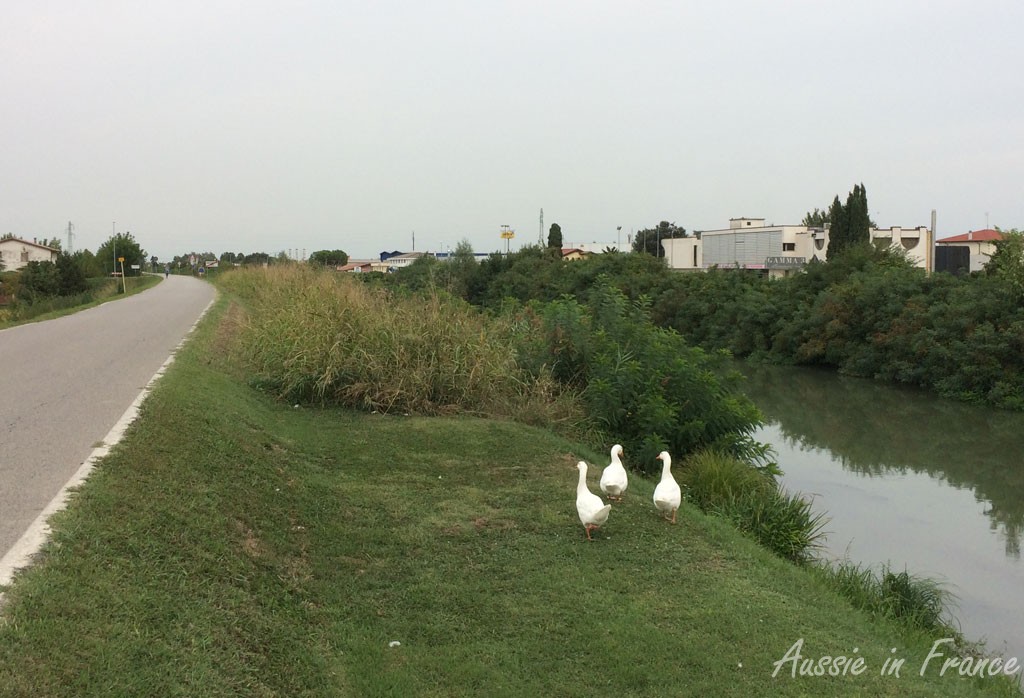 The ice-cream is delicious (chocolate, fiori di latte and fig in a very good cone) and according to the newspaper clippings in the window, has won many prizes. What a lucky find! 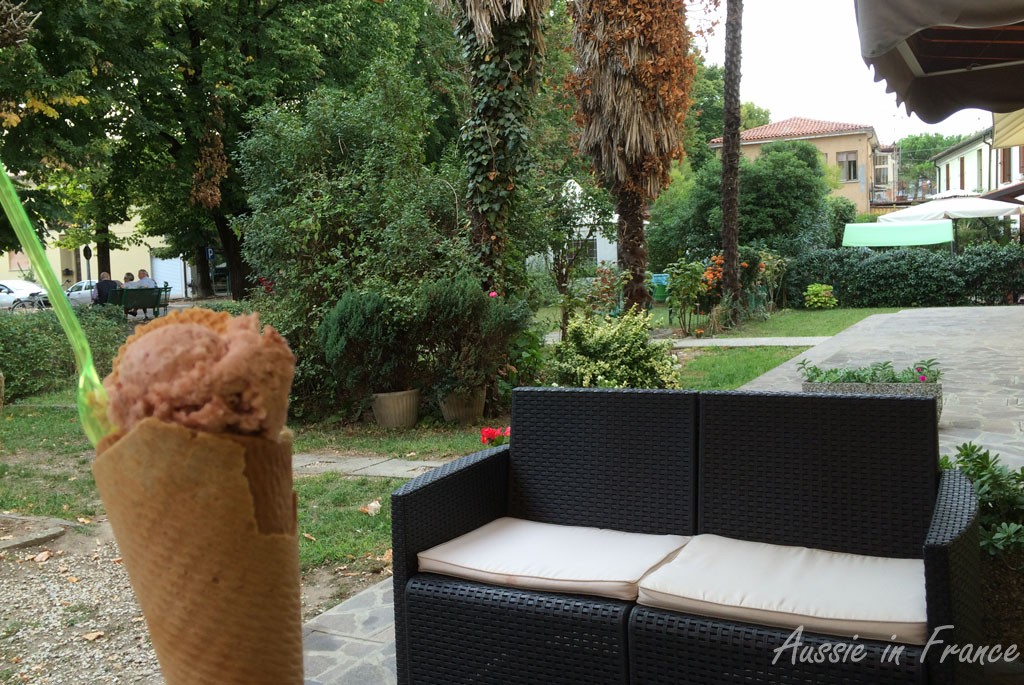 Meanwhile, my bike speedometer is no longer working because the sensor has fallen off. I think I know when it happened yesterday, just as we arrived back in Monselice, but there is little chance of finding it so I ask in the ice-cream shop for a bike shop. The lady looks at me with astonishment. In Battaglia, she says, I don’t think so, then asks her husband who’s chatting with a customer. Of course, he says, and the customer starts explaining how to get there.

I ask him to come outside an point the way, lentamente per piacere I understand it’s on the other side of the canal. Bingo! We are able to buy a new speedometer and a second tyre because Jean Michel says the other one on my bike is pretty worn as well and we need to be prepared for another puncture. 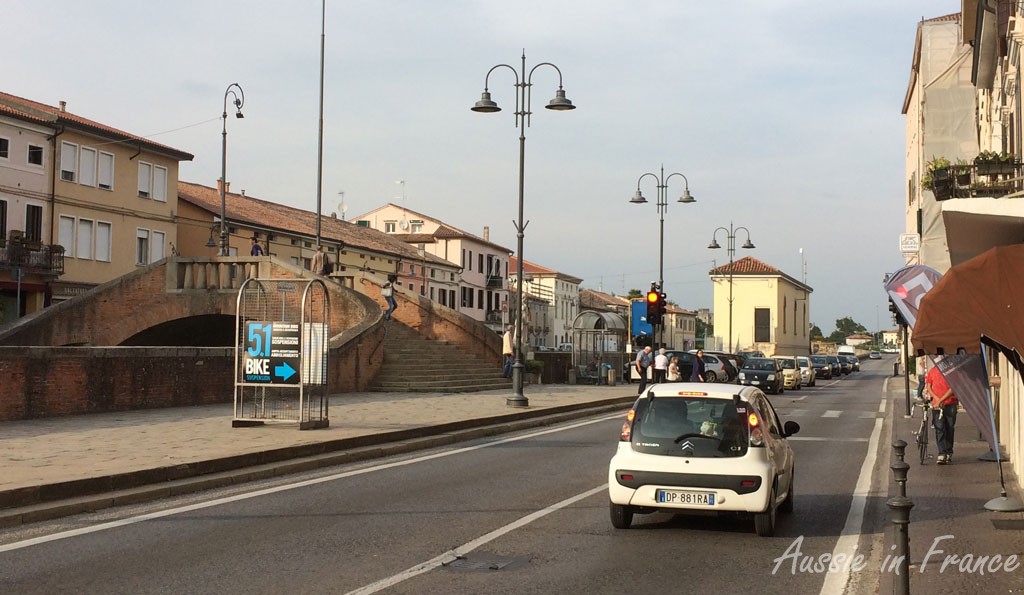 The 51-bike shop on the main road in Battaglia Terme

We arrive back at Zorzi apartments in Arqua Petrarca at 6 pm, practically a record these days and are able to spend some time in our little garden. We’ve decided on the next stage of our trip – two nights in Zagreb, which is 5 hours away, then onto to the Danube, starting at Nova Sad if the weather is fine, or further along if it’s not! The current immigrant events may also force us to take another route.

This entry was posted in Accommodation, Architecture, Art, Cycling, Italy, Sightseeing and tagged euganei hills by bike, walled towns of the veneto by bike. Bookmark the permalink.