Cycling on Lake Garda #1 – Torri to Malcesine and Limone

Posted on September 15, 2015 by Rosemary Kneipp

Off on our summer holiday at last ! The window and the kitchen are finished and a well-deserved month is awaiting us. We are starting with Lake Garda in Italy and hoping to go to Slovenia and onto Zaghreb in Croatia and eventually to Bucarest to continue cycling along the Danube where we left off last time (Budapest). But with immigration and border problems in eastern Europe at the moment, we’re not sure how far we’ll get. 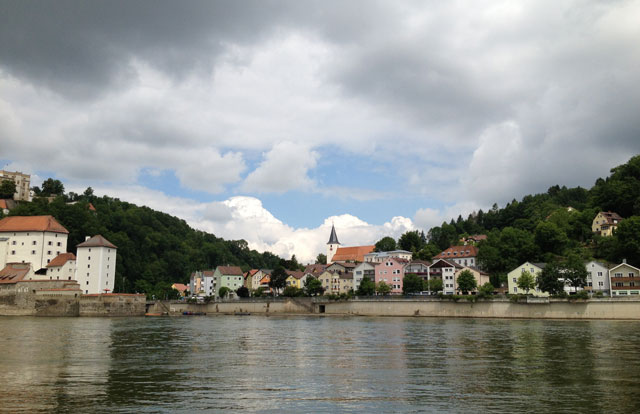 We arrive in Torri del Benaco on Lake Garda around 6 pm and head for the tourist office because our Tom-Tom can’t find the address of the hotel. At the same time we ask about cycling paths. The girl looks askance then hastily circles a few towns on the map and says “You can cycle from there to there and from there to there. Otherwise it’s on the main road.” We’ve been driving on the main road and the traffic does not look encouraging. 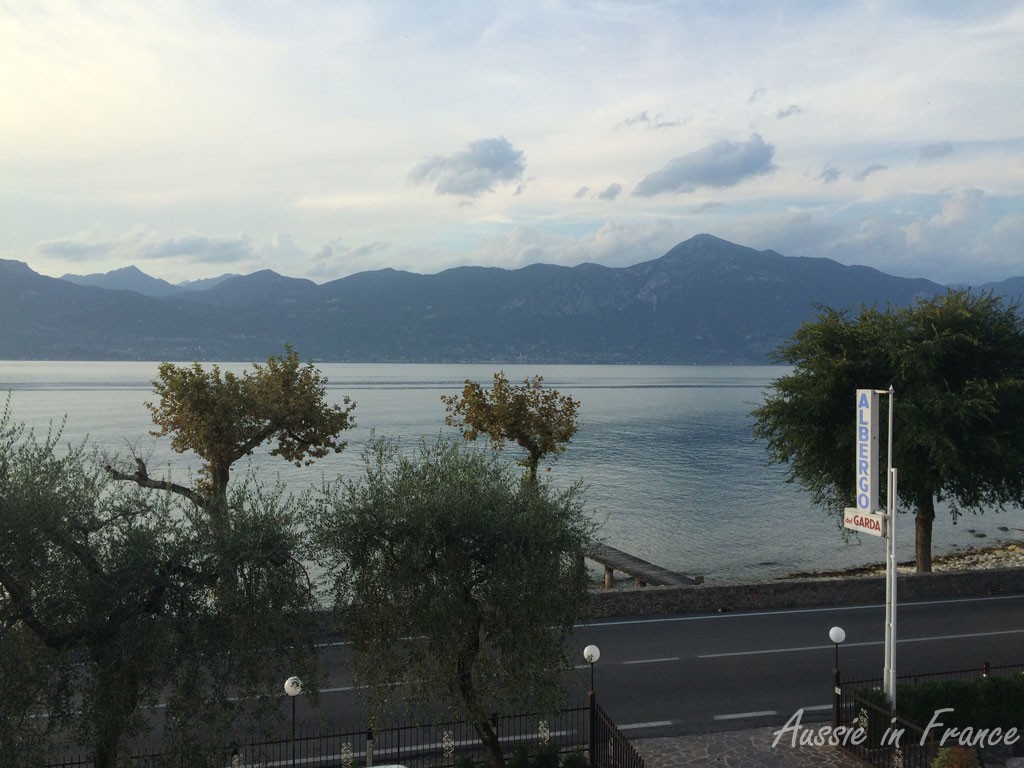 View from the balcony

Our hotel, Albergo del Garda, turns out to be 4 k to the north. I had understood it was in the village itself. The idea was NOT to have to take the car for 3 days. Hmm. We arrive and see that the hotel is located directly on the main road. We receive a very stony welcome and are shown our room on the second floor without a lift. The room is very spartan and small. However, it has a balcony overlooking the lake and the view is stunning. 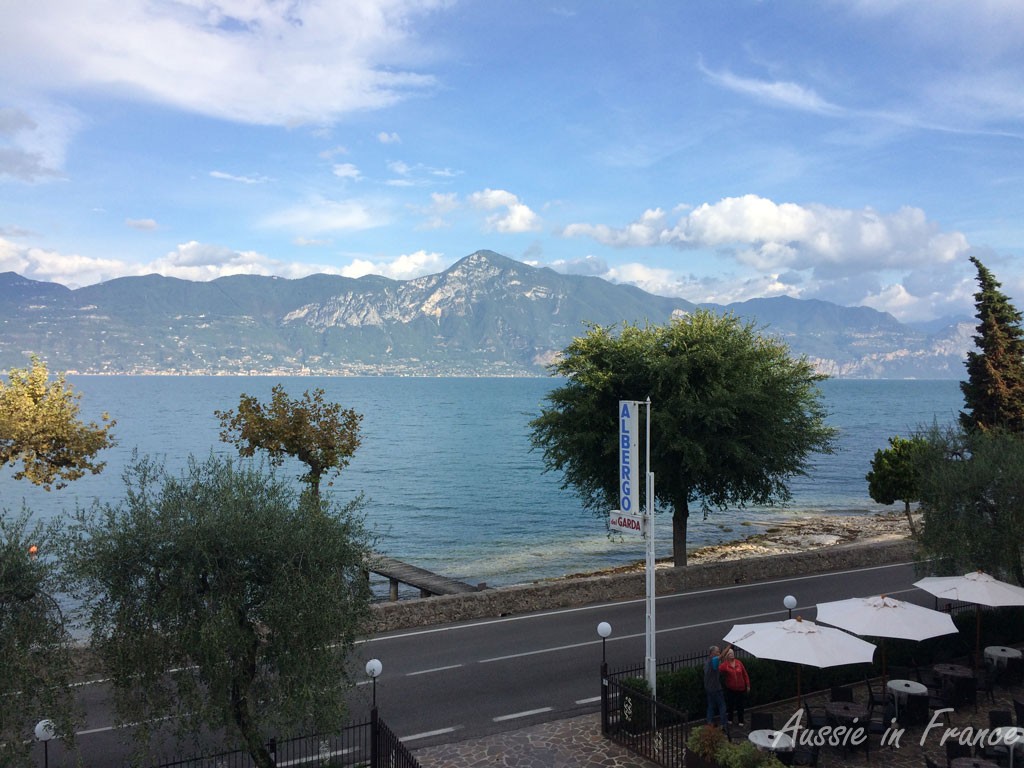 Our balcony view in the morning

It has been a very fraught day (I had an attack of orthostatic hypotension at lunchtime and we had to rush out of the restaurant in Aosta and driving on the Italian motorway is not very relaxing even for a good driver like Jean Michel). I suggest that we unpack the car later and have a cold drink of wine and some olives on the balcony first. As we sit and look at the view of the lake and mountains opposite, the magic begins to work. 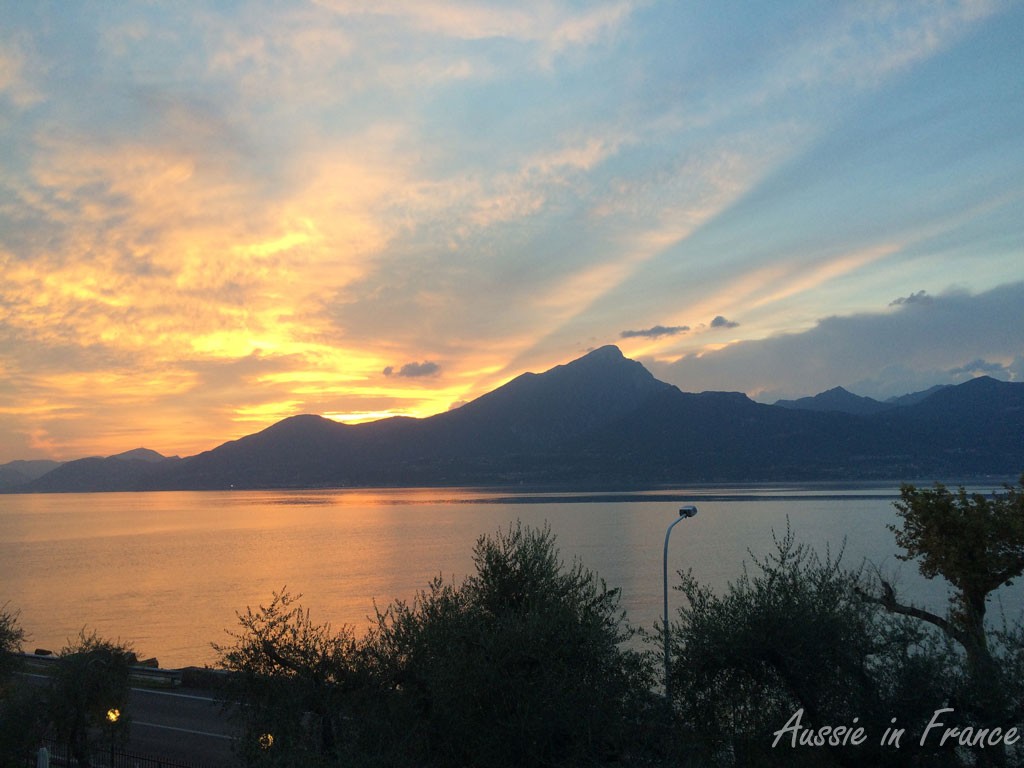 Sunset from our balcony

The sunset turns out to be quite spectacular and we at last feel we are on holidays. Rather than go out again, we eat some of my home-made bread, tomatoes from the garden and our cycling biscuits. 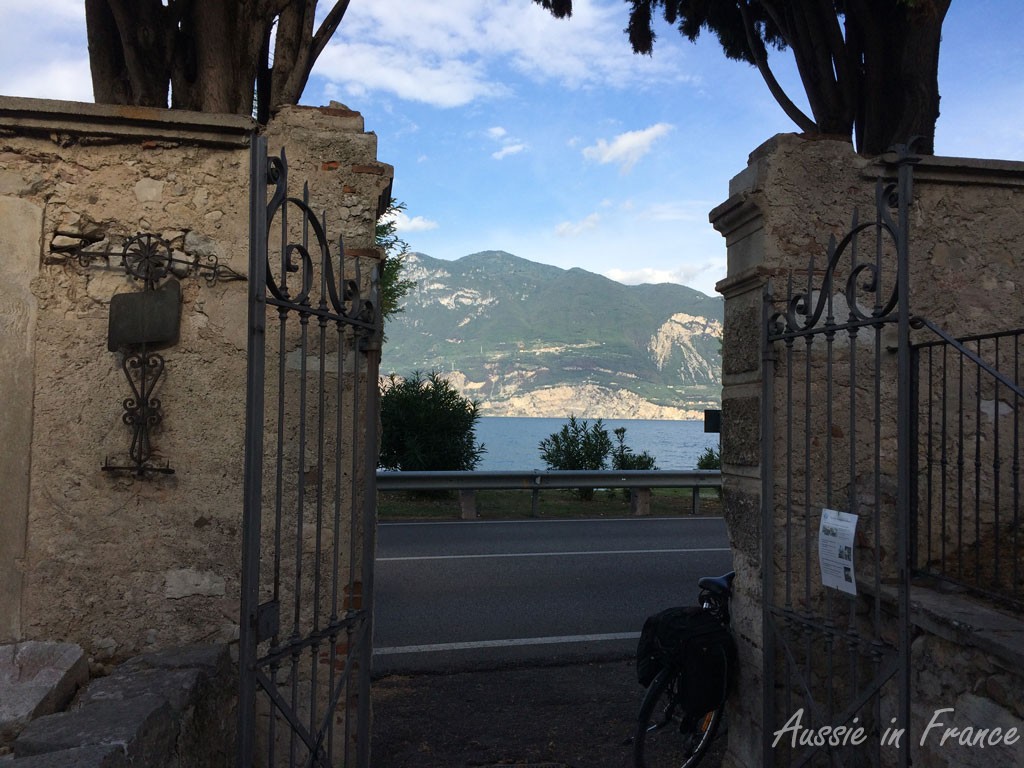 We wake up next morning at 8 am (early for us) due to the extremely thin walls (I could hear the man next door snoring in the night) and have breakfast, which isn’t bad for Italy which is not renowned for its prima colazione but all the guests except us are German which probably explains why it’s better than usual …

The view of the lake from main road

By 9.15 am we are on our bikes, on the main road, heading for Malcesine 18 K to the north where we’re taking the ferry to Limone on the other side of the lake. The view is so wonderful that I forget to be nervous as cars speed past at 90 kph. We stop several times to take photos. 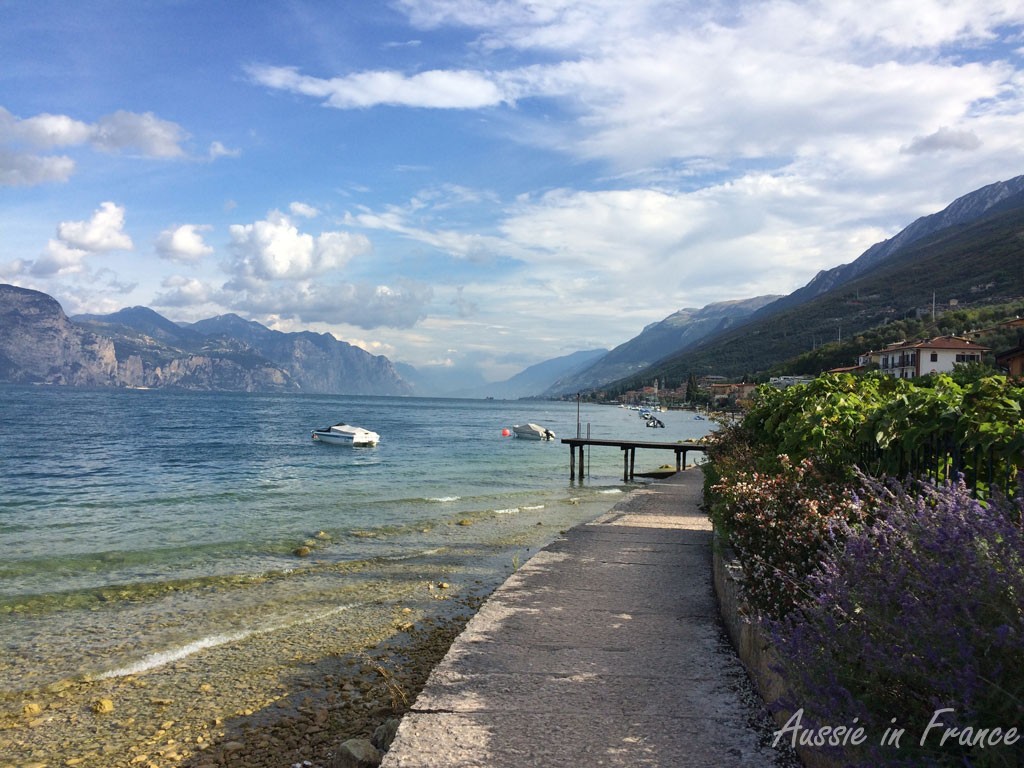 The view from our first attempt at finding the cycle path

There’s supposed to be a cycle path at Castelletto di Brenzone 6 k from along the route but we have a little trouble finding it. We eventually do (there are no indications) and stop for a cold drink at Ristorante di Umberto right on the lake. It feels like heaven. 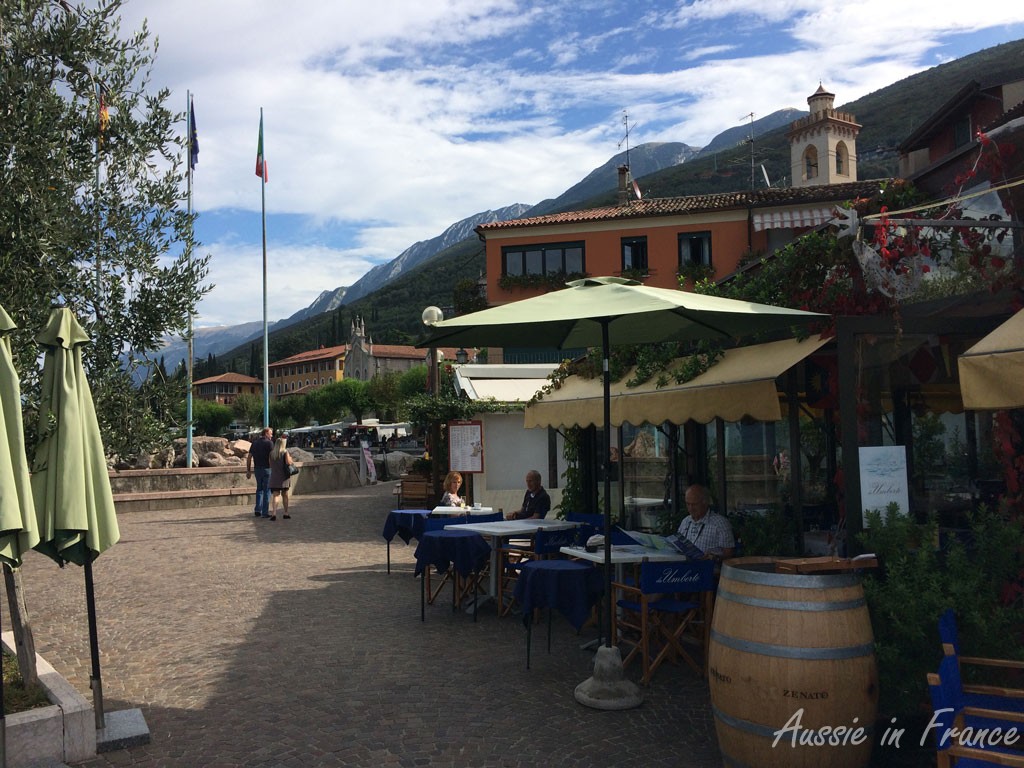 Our first stop for the day at Castelletto

We continue along the path past a busy market. It then becomes very pebbly and we hope it’s going to improve. It does and from then on, we are riding along the lake, past lovely little fishing villages with their tiny rectangular ports. 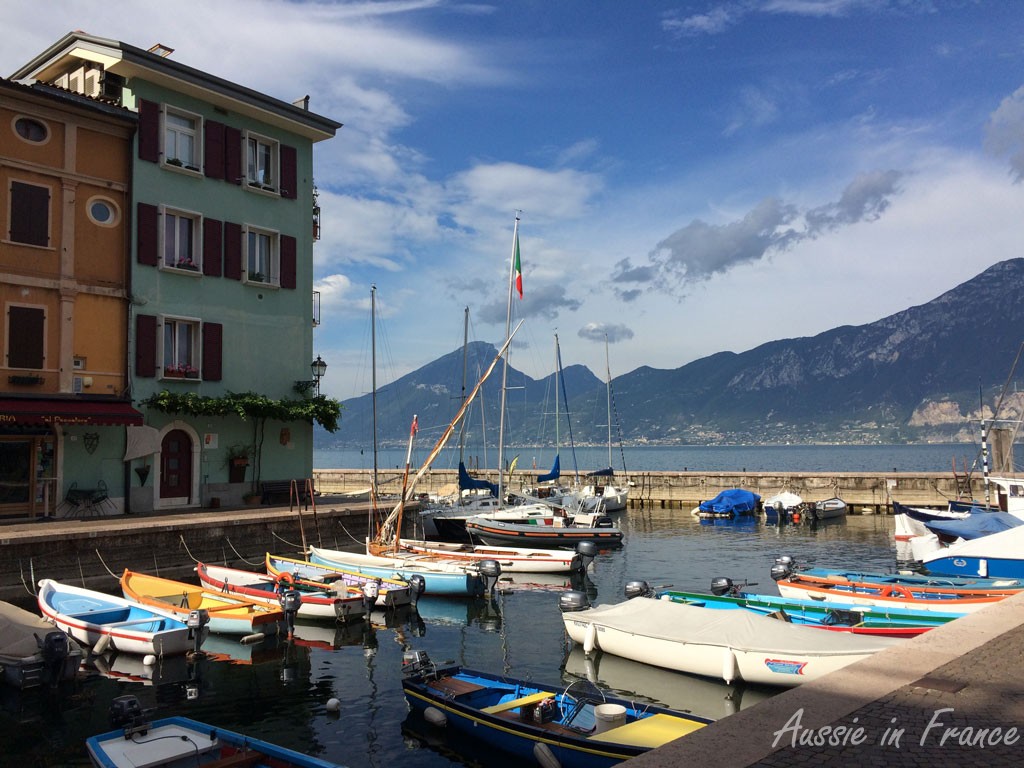 The first rectangular port in Castelletoo

The light and the colours of the lake are quite wonderful. We couldn’t hope for a better start to our holiday. 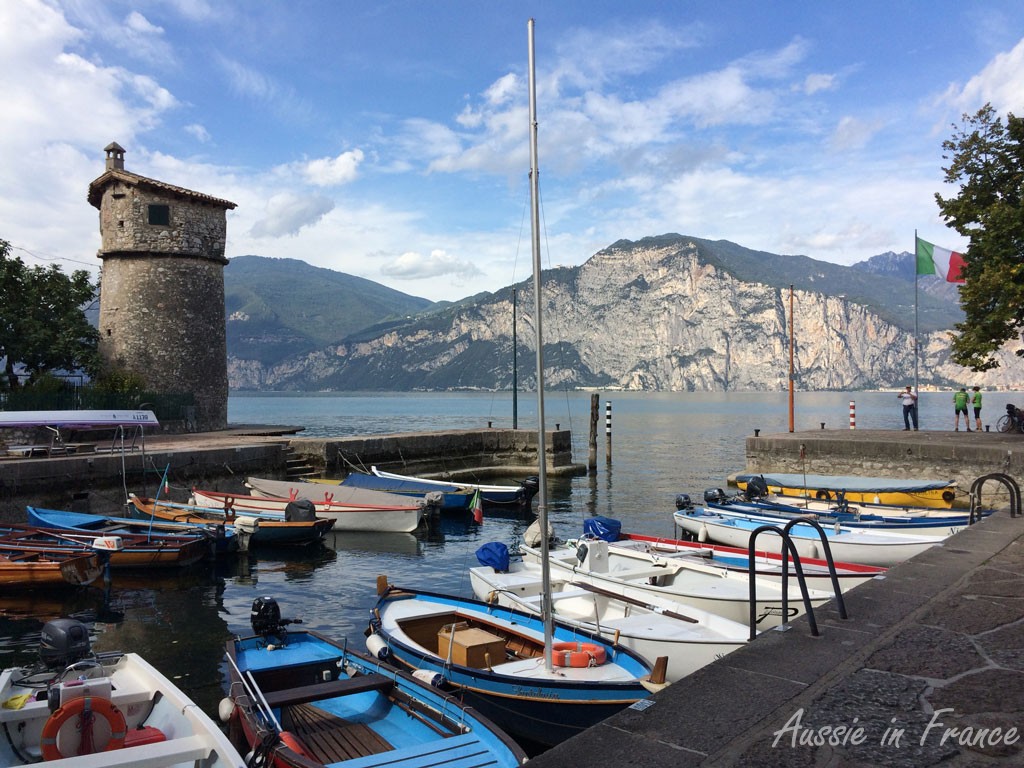 The tower and port in Cassone

At Cassone, the last village before Malcesine, we visit a small museum devoted to life on the lake. I check the ferry timetable and see that we only have a half an hour before it departs and the next one is two hours later. We leave post haste and arrive in Malcesine with 5 minutes to spare. There is a queue for the tickets but we make just in time. We’re stunned at the price – 19.40 euro for two people and two bikes! 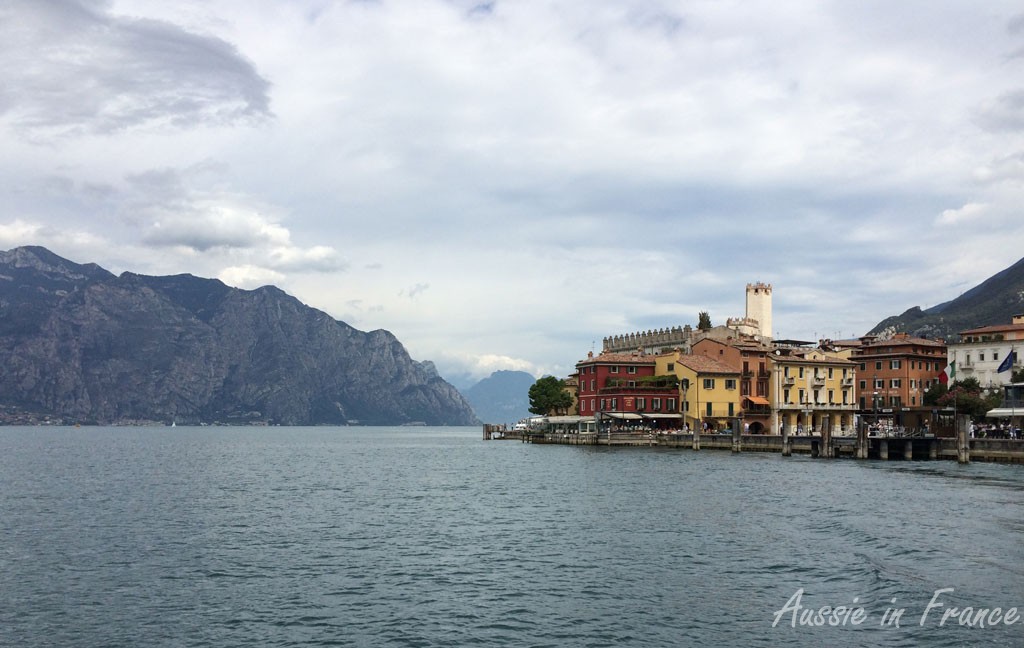 Malcesine from the ferry

It takes a half an hour to go across the lake to Limone. It’s lovely being on the lake with lovely views in every direction. After starting out in the morning at 19°C it’s now 25°C and feels quite hot. We get off the ferry and are overwhelmed with the number of tourists. Everyone seems to have come to Limone for lunch, like we have! 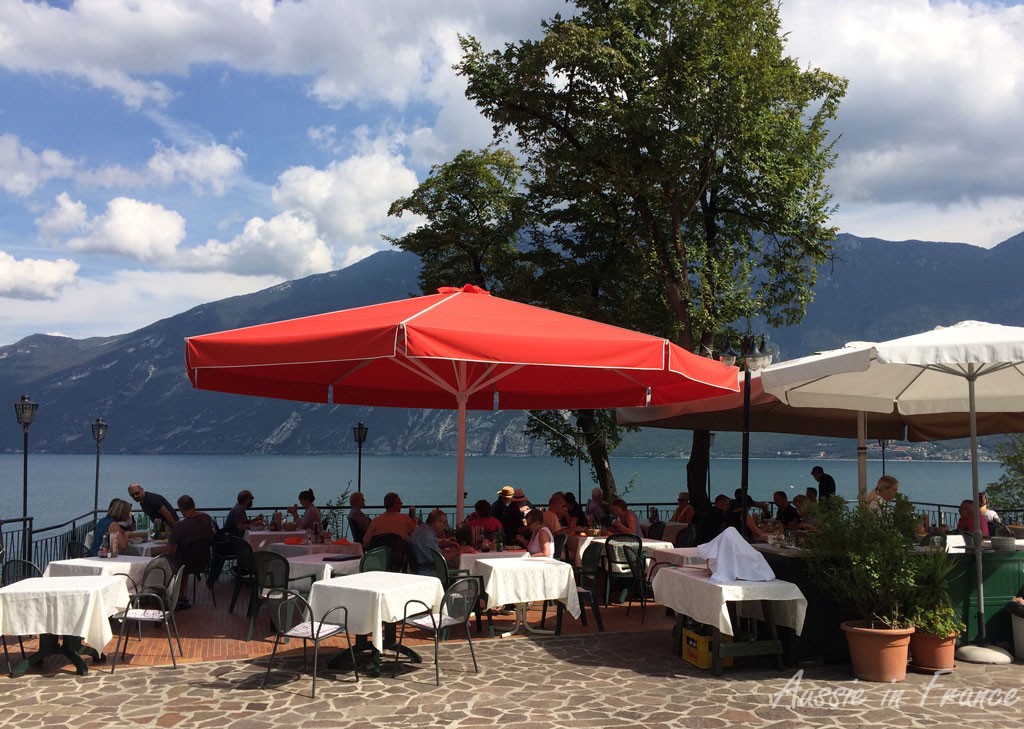 We find a place to leave our bikes because it’s hard going with so many people and so many steep streets. We walk up a hilly street away from the main eating area in the hope of finding something a little less crowded. We eventually come to a shady restaurant overlooking the lake called Ristorante Alla Noce. 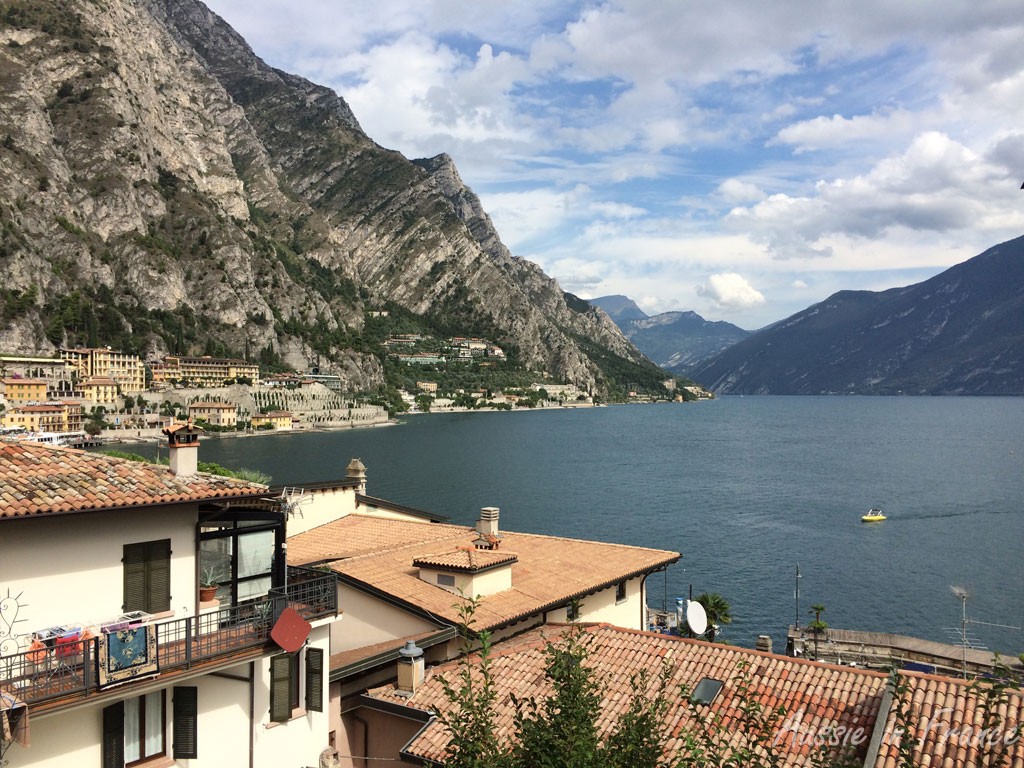 The view from Alla Noce in Limone

The sour-looking waiter finds us a table and brings us a menu but the view is lovely so we ignore his attitude. We share a seafood antipasto, followed by grilled lake fish for Jean Michel and a steak for me because I’m not feeling at all adventurous after yesterday. We have house wine which is very slightly frizzante like a lot of the Italian wines. The bill comes to 59 euro. 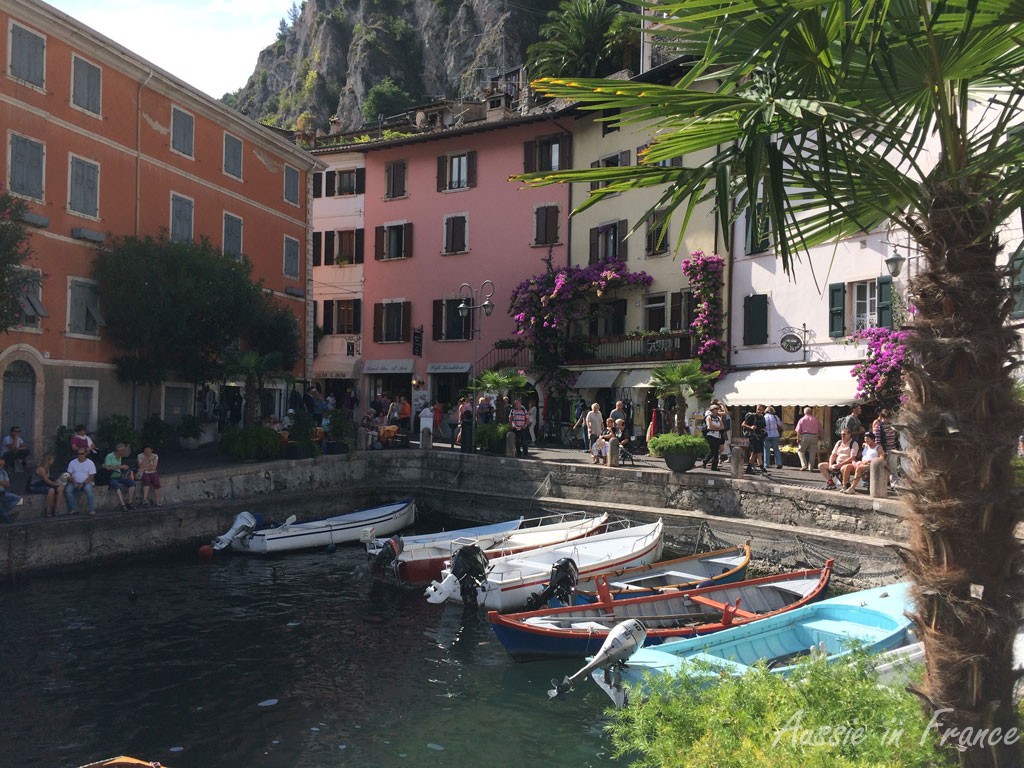 The little port in Limone

After coffee, we head back into the madding crowd and then look for our ferry which leaves from a different quay it seems. On the way, we see another boat going to Malcesine which turns out to be a bit cheaper than the official ferry (18 euro) and we don’t have to queue for tickets. The engine is very noisy and we get sprayed a bit but we enjoy the ride. We later learn that it’s 9 euro per person return but we don’t know what they usually charge for bikes. 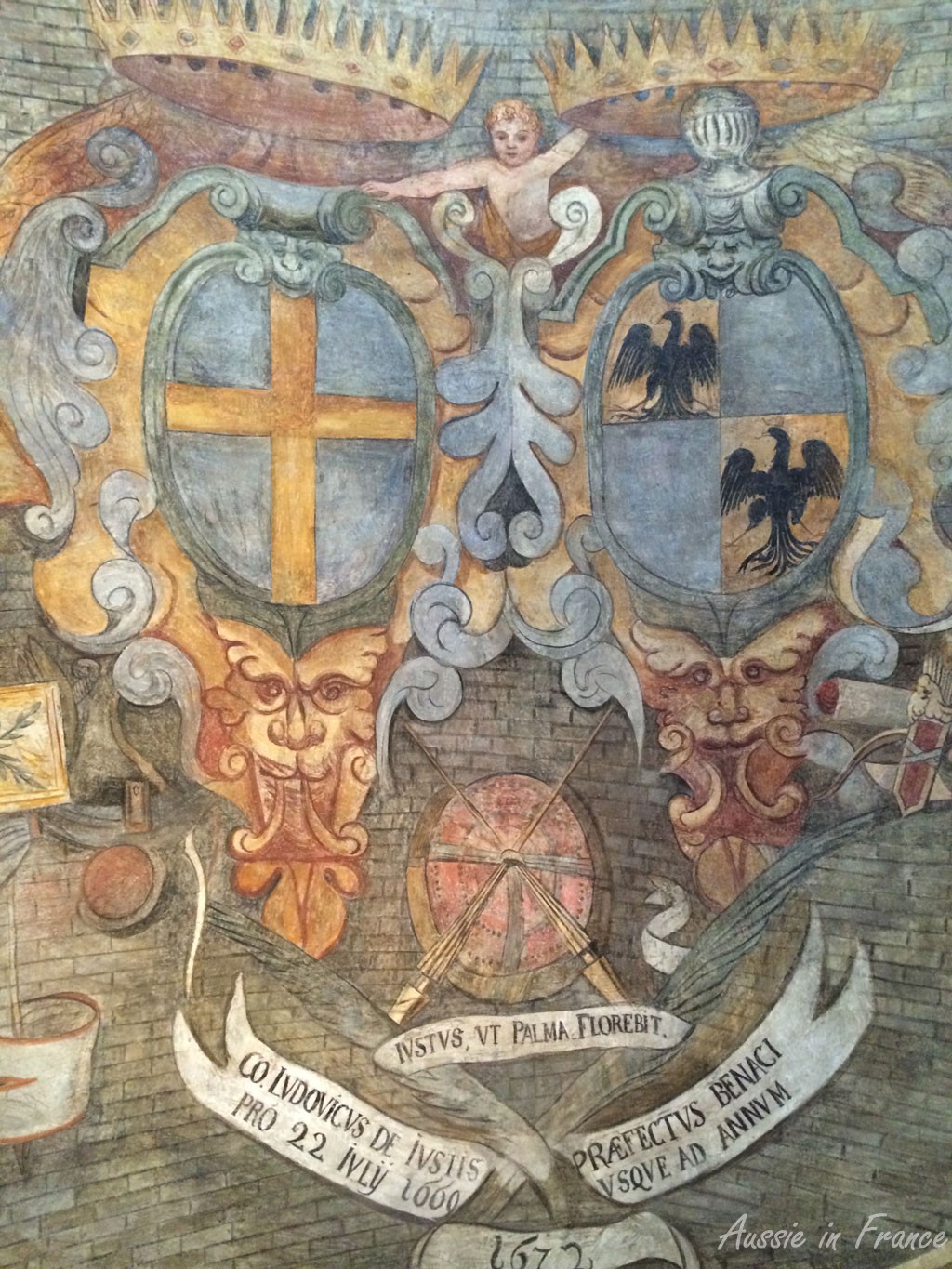 The fresco on the Palazzo dei Capitani in Malcesine

We do a quick tour of Malcesine which, like Limone, is full of tourists and shops. It has several historical buildings including the Palazzo die Capitani  built in the 13th and 14th century. You can just walk into the main room with it’s 17th century fresco. 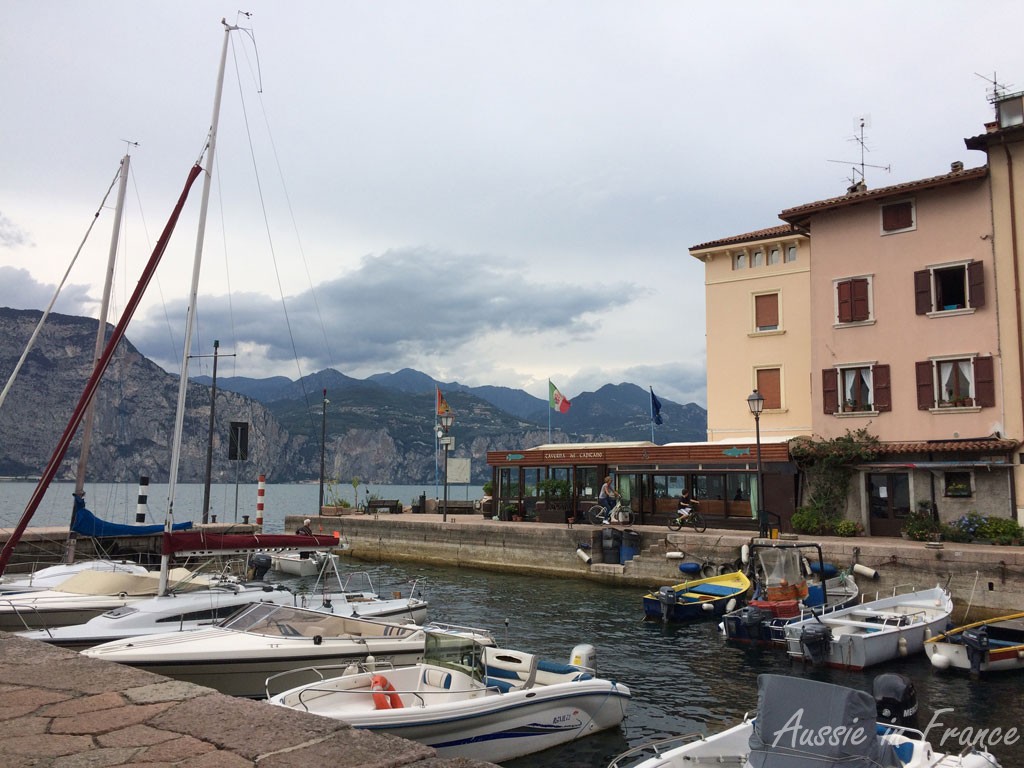 The view while eating our ice-cream at Porto di Brenzone

We then set off home again, stopping for a gelato at one of the little ports along the way, Porto di Brenzone. 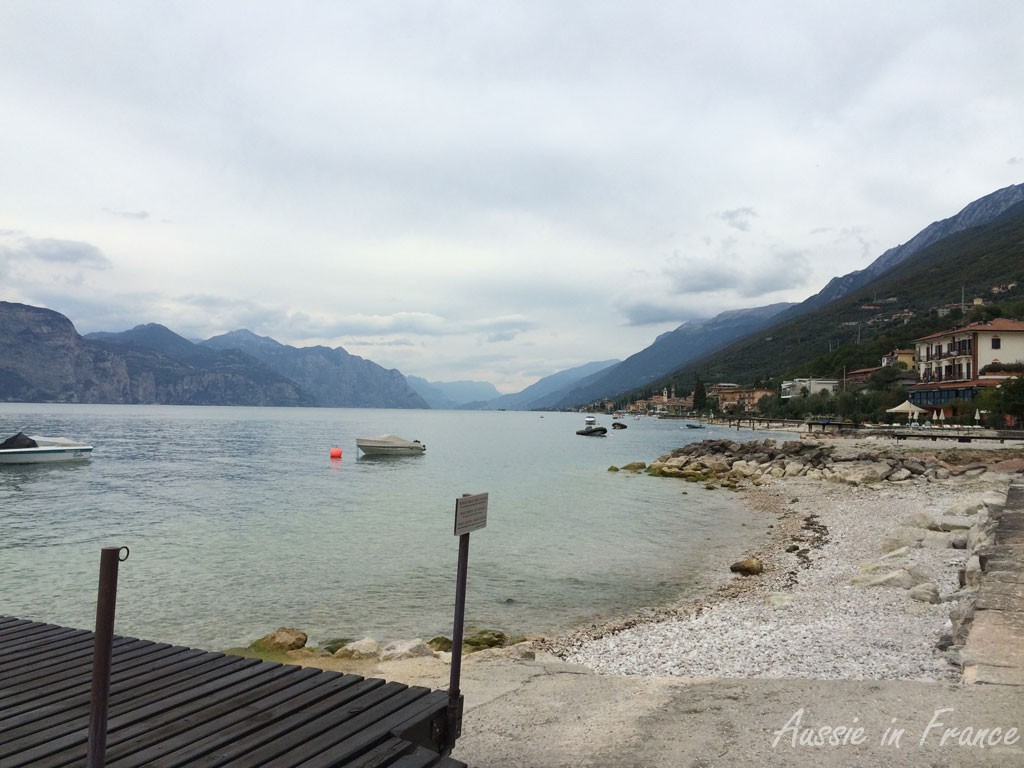 Typical view from the bike path on the way home

The views are still lovely though we’ve lost the magical light we had in the morning. The bike path eventually gives out and we’re on the main road again. We reach our hotel at 6 pm, after cycling 39 k and a total time of 3 hours 20 mins. Nearly time for an apertif on the balcony again!