Pest has not prepared me for Buda. Although we can see it from the other side of the Danube, I have no idea of what is awaiting us. 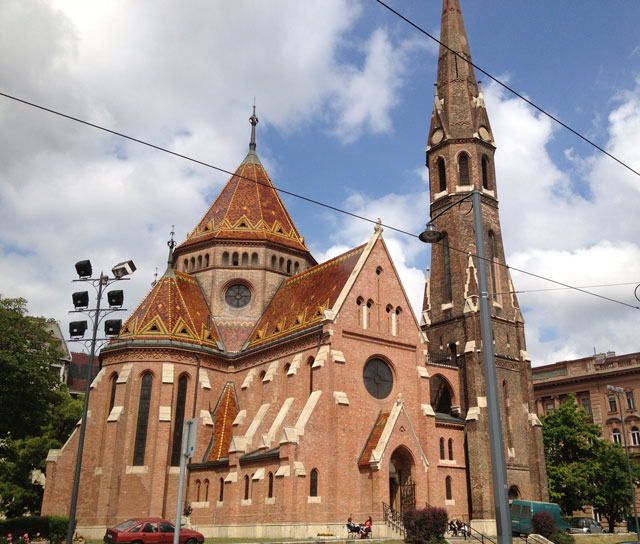 We park the car next to an unidentified red brick church with colourful varnished tiles, put our remaining coins in the parking metre and go off to find a café to get some more change. The Corvin Café on Corvin Ter is just opening and the lady is unstacking chairs and tables in one corner of a deserted square. She is obviously very taken with Jean Michel so I let him deal with getting the change. 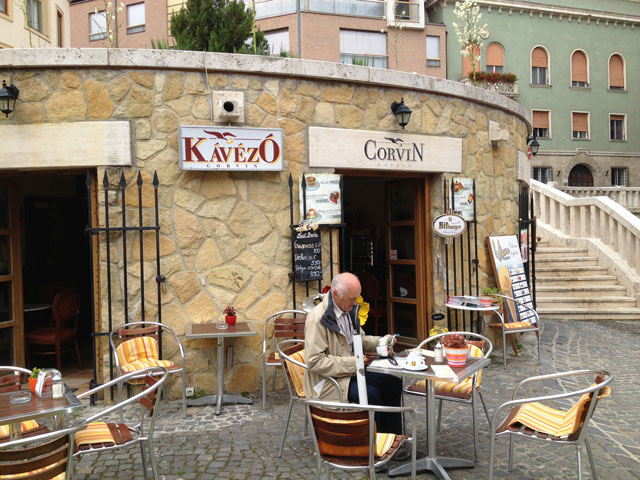 We walk up a couple of quiet streets and a flight of stone steps and suddenly, Buda’s Castle District is before us, like something out of the Knights Templar. It is quite stunning. 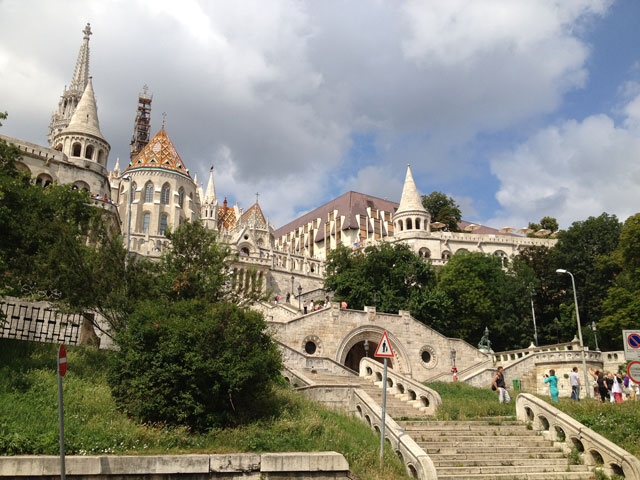 As we climb, each step gives us an even better view of Pest. 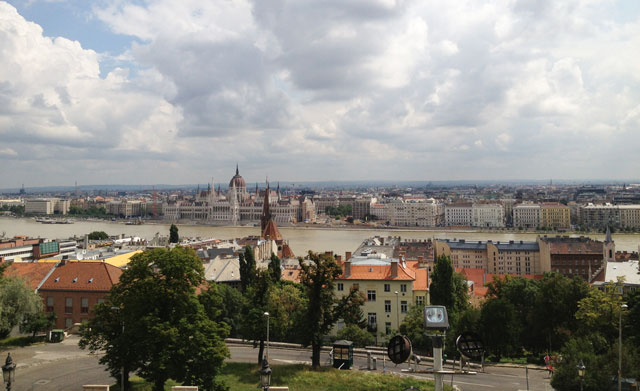 View of Pest from the Fishermen’s Bastion

On the other side of the ramparts known as the Fishermen’s bastion, built in the early 1900s as a homage to the mediaeval fishermen in charge of defending this side of the ramparts, stands a white church with people milling around. There is something quite magical about the whole scene. 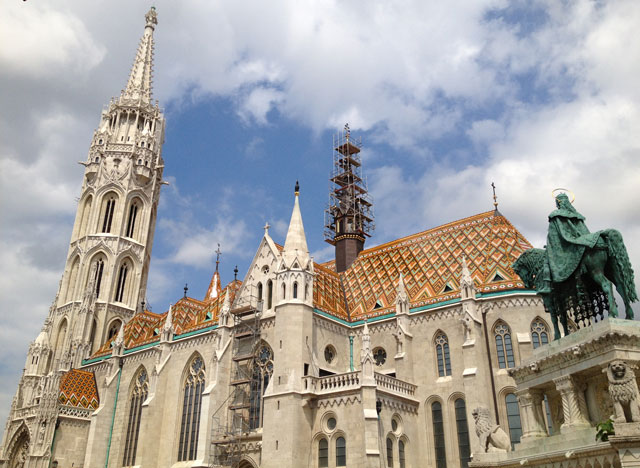 The inside of the church is something entirely new to us. Not the rococco style we’ve seen up until now. The colours are muted with intricately painted walls and ceilings of Arabic influence though very different from the Moorish art in Spain. Although the church dates back to the 13th century, it has been remodelled and restored over the ages. 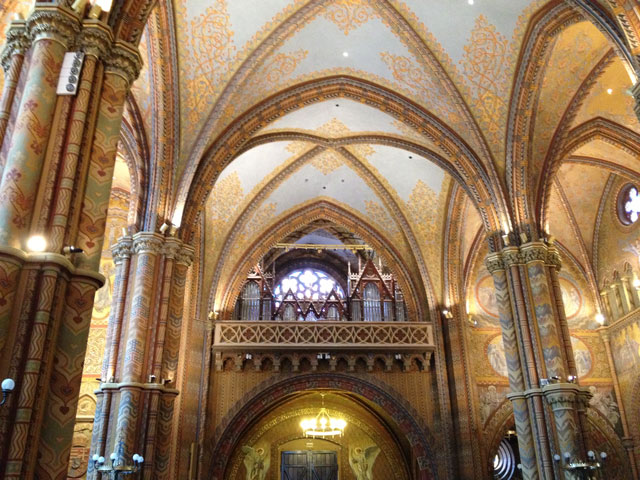 When we come outside there are two men in mediaeval costume, one with dreadlocks, with hawks. There is Hungarian music playing somewhere. 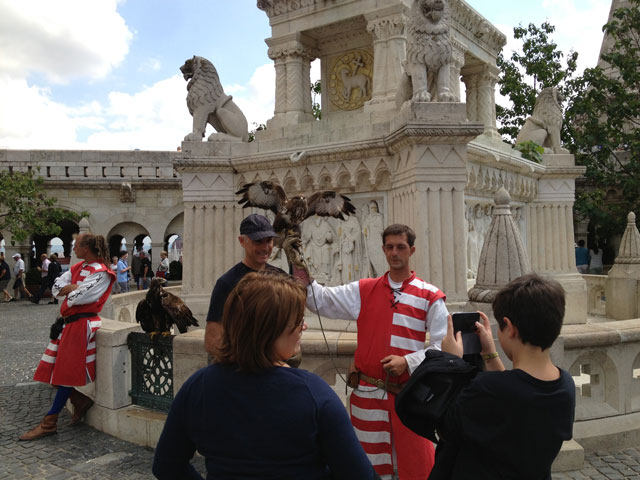 One building stands out like a sore thumb – the Hilton Hotel, an entirely new construction whose presence is totally incomprehensible, despite the “integration” of a few mediaeval ruins. You really do wonder how it was every allowed. 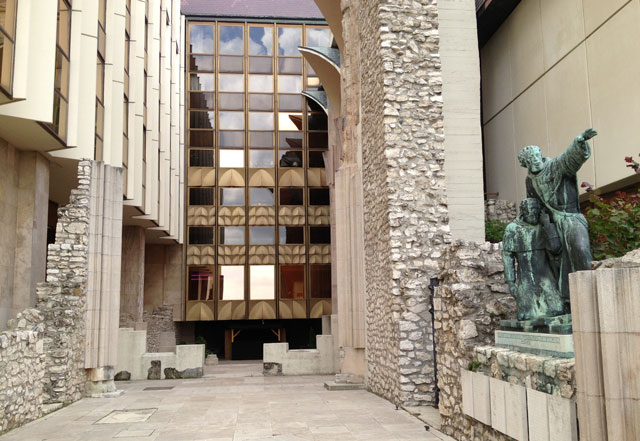 We wander through the streets, delighting in the painted façades on some of the oldest buildings in the capital. By then we have left the tourists behind. 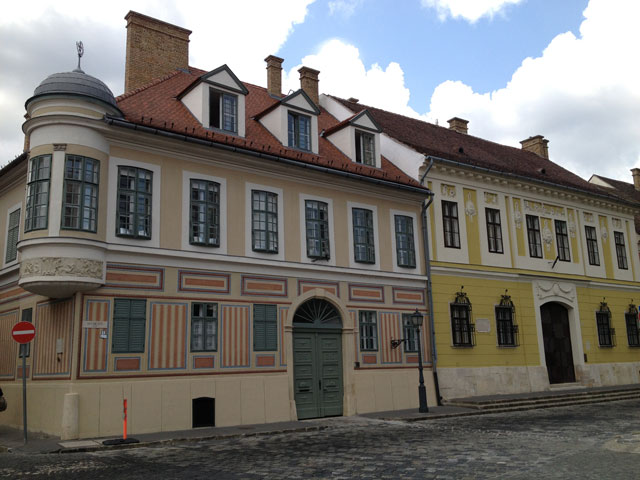 We loop back to the other side of the church, past Holy Trinity Column, was built to celebrate the end of the plague in the hope that it would provide protection from another epidemic. 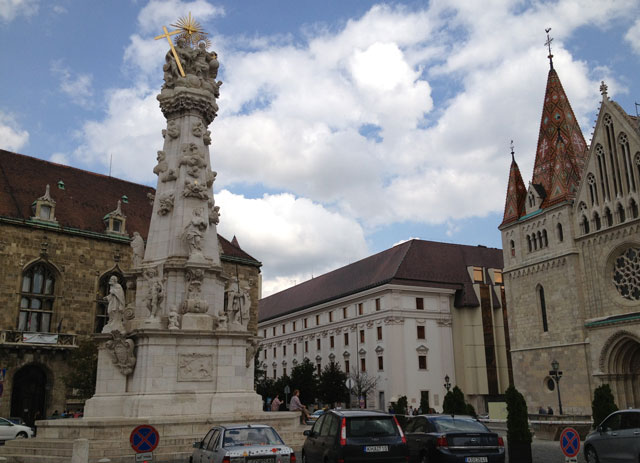 Then we go back down to the Danube by the same route as before. I see a family with a little girl and boy looking at something on the ground. It turns out to be a hedgehog which, suprisingly, is not rolled up in a ball, and is coming towards us! 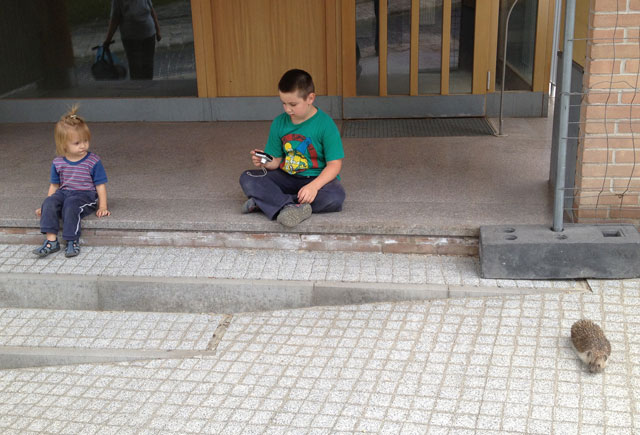 By then it is after one, so we feed the metre again and go to look for a fish restaurant with an impossible name indicated by the trusty Routard. We both order pike-perch (zander) prepared in two different ways. We’re not convinced it is the same fish on both plates. 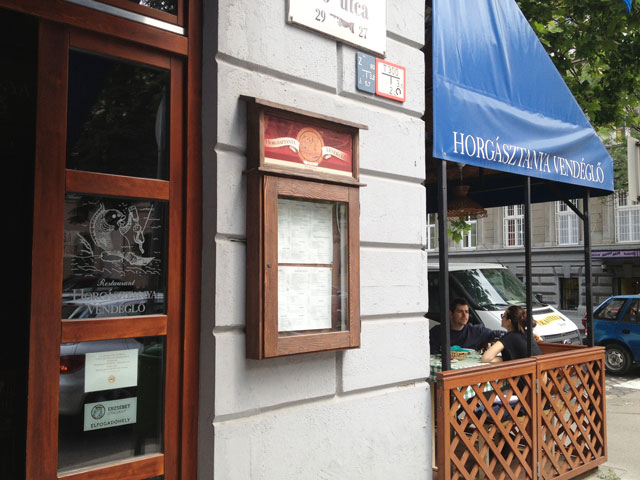 Jean Michel has read that Hungarian tokay wine is worth tasting but the waiter says we can’t buy it by the glass and that the half bottles are too expensive so we order another Hungarian dry white instead which is very pleasant. 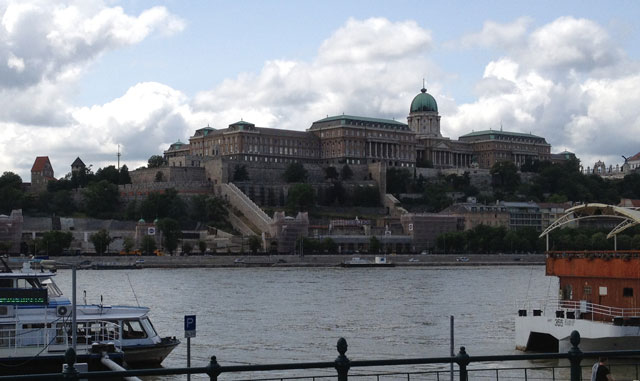 We decide not to visit the Royal Palace, which has been completely gutted and rebuilt over the years and now contains two museums.

Instead we move onto the next item on the day’s programme – one of Budapest’s famous baths which I shall tell you about in my next post.