﻿ Cycling along the Danube – from Ybbs to Grein in Austria

Posted on October 3, 2015 by Rosemary Kneipp

We know we’re in Austria because the host at our Radlerpension (radler = cyclist) greets us with Grüss Gott which literally means “may God greet you”. The first time we heard it was in Bavaria as we climbed the hill to the stunning Baroque church of Wies. Every person we passed said Grüss Got to us. When we got back to the hotel, I asked what it meant and was told “it’s just a thing they say here”. Hmm. 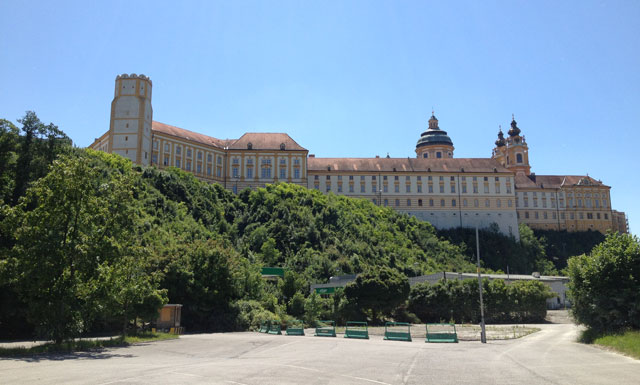 Melk Abbey from the bike path

It’s already October and the days are getting shorter and cooler. We’re having trouble finding places along the Danube to cycle but the Eurovelo 6 bike route to the west of Melk, famous for its Benedictine Abbey built in the early 18th century and affording a stunning view of Wachau Valley and the Danube, seems promising. 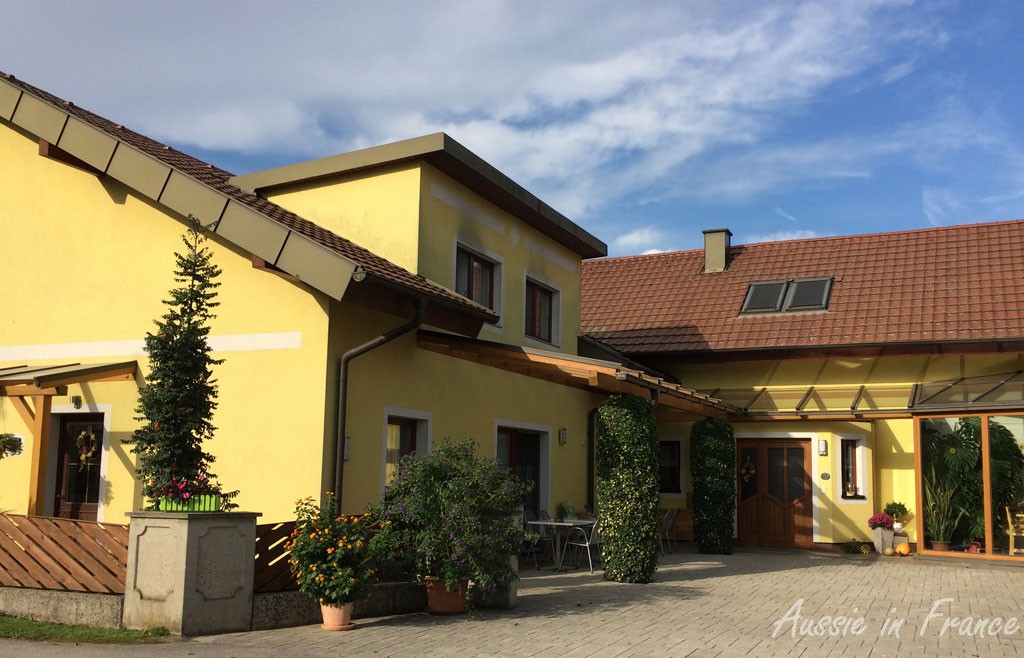 Our Radlerpension Leebs is right on the Eurovelo 6 path and well situated. The only problem is that the wifi cuts out at about 8 pm and doesn’t return until midnight by which it’s too late of course. I mention it next morning to our hostess and she is surprised. We hope it won’t happen again. This evening, it’s working perfectly so everything seems in order. 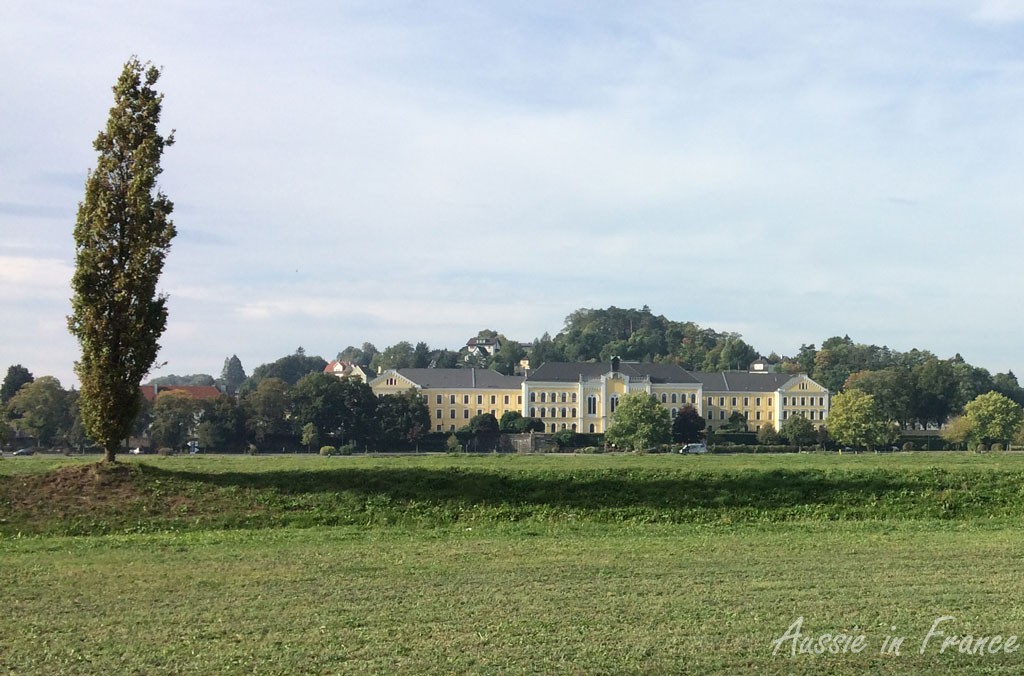 Ybbs from the bike path

By 10 am, it’s warm enough (15°C and promising to be sunny) to set out on our bikes. We are happy to be on a real bike path such as those we have always experienced in Germany and Austria, usually right on the edge of the Danube. 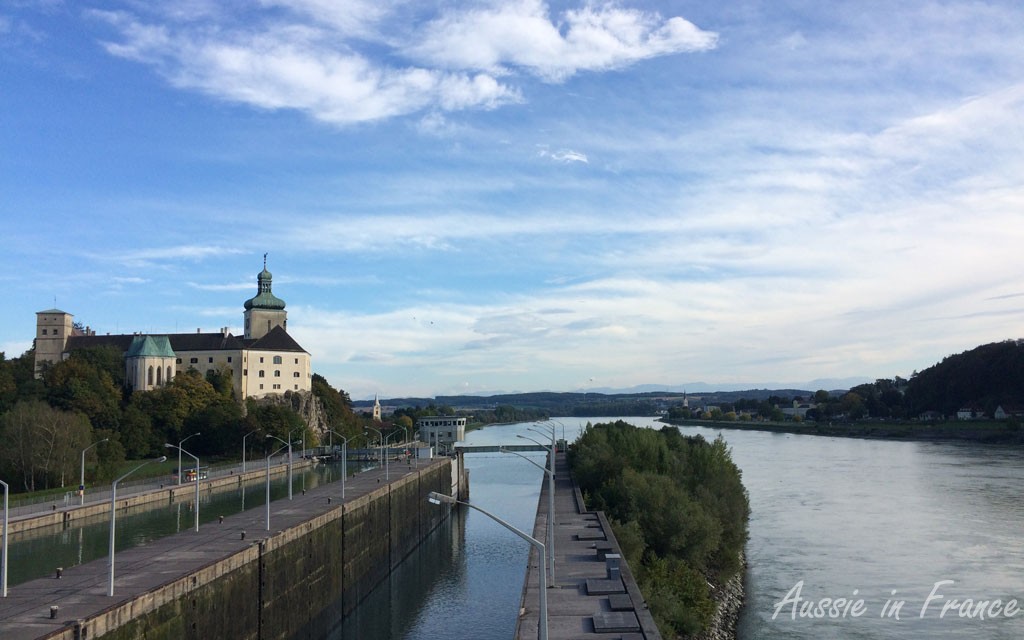 The view from the bridge between Persenbeug and Ybbs

However, the signs are not that clear and we cross the bridge at Persenbeug on  the road instead of the bike path! After that, we follow a small sealed road along the Danube for about 10 kilometers. It’s not a bike path but the occasional car is not a problem. 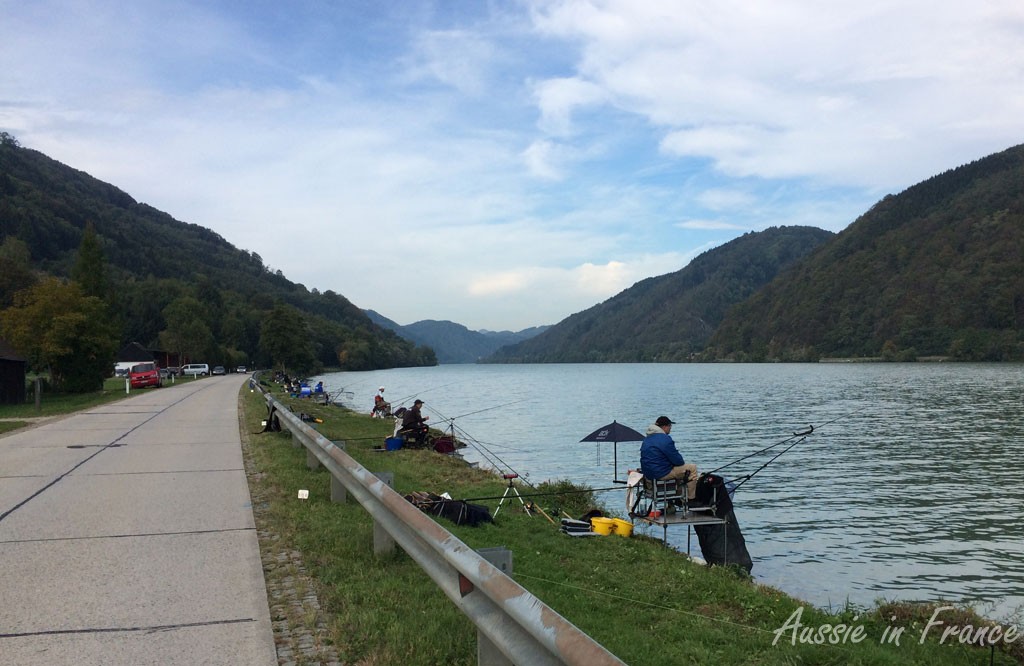 A fishing competition on the Danube

We go past a number of fishermen evenly spaced along the riverside and Jean Michel says that with such sophisticated equipment, it has to be a competition. 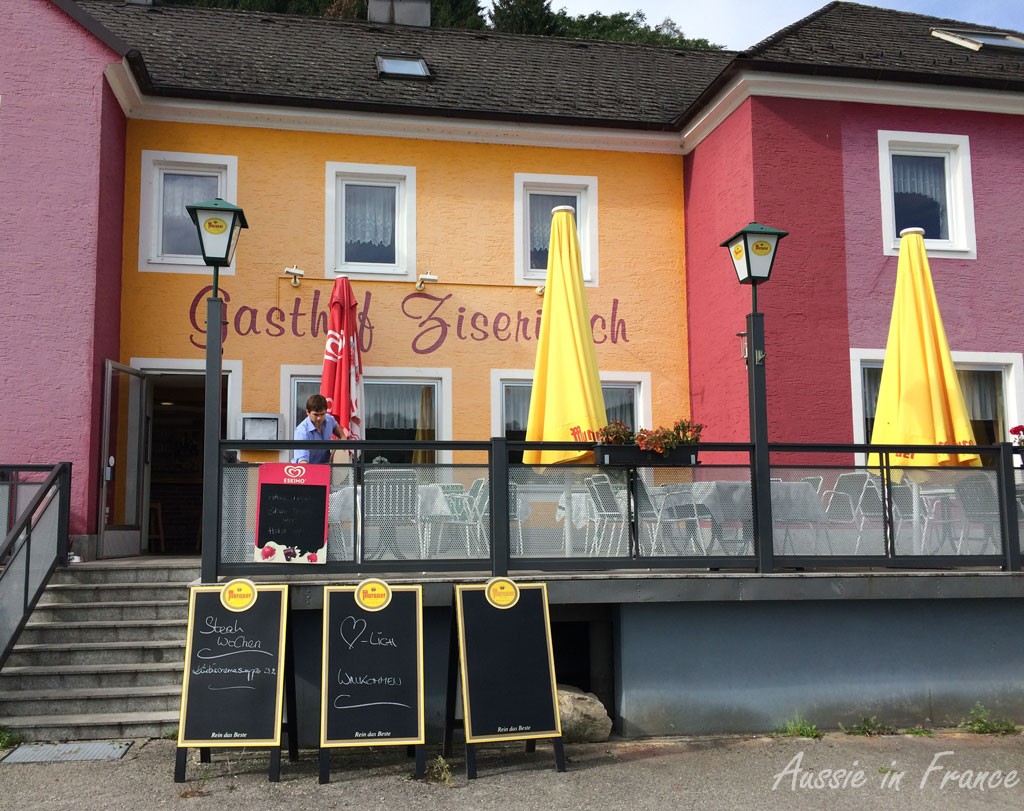 A great place for a cappuccino

When we get to Willersbach we’re ready for a cappuccino and Gasthof Zur Ruine Freyenstein has a terrace overlooking the Danube. 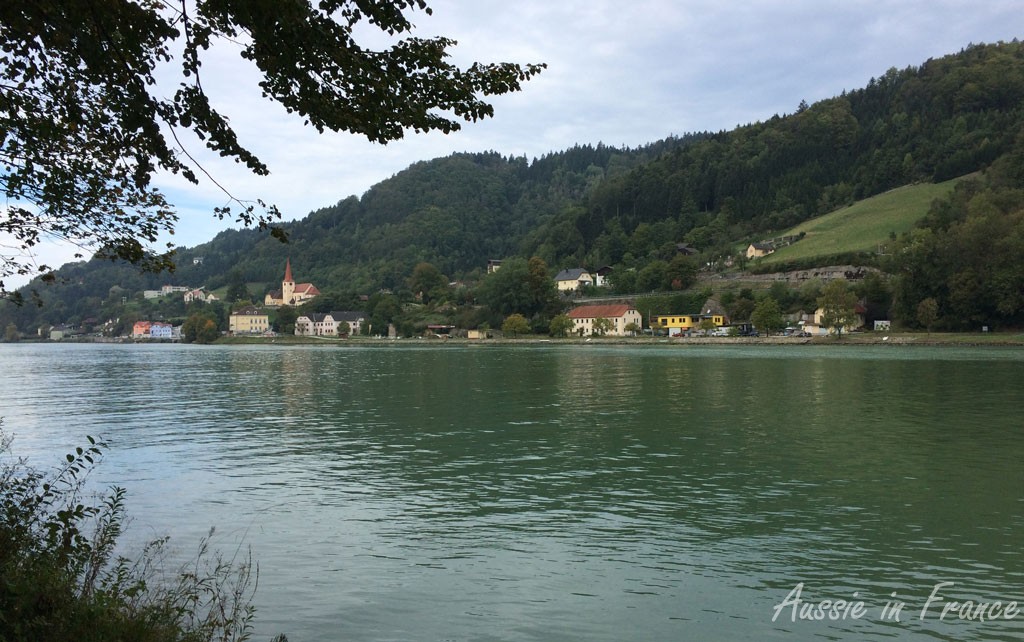 The Danube from the bike path

The scenery is not as stunning as it is on the S-bend and the Wachau but it’s still very pleasant and the temperature is gradually getting warmer. 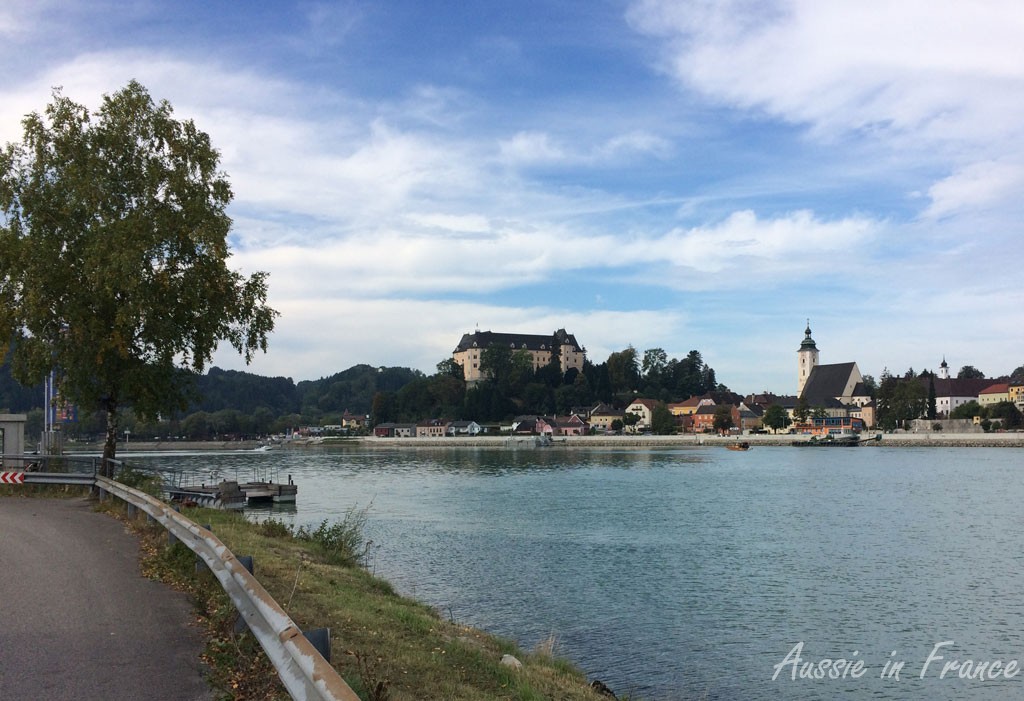 Grein from the bike path

We reach the bike ferry that goes to Grein after about 20 K but unfortunately, it stopped running at the end of September so we continue for a couple more kilometres to the bridge. 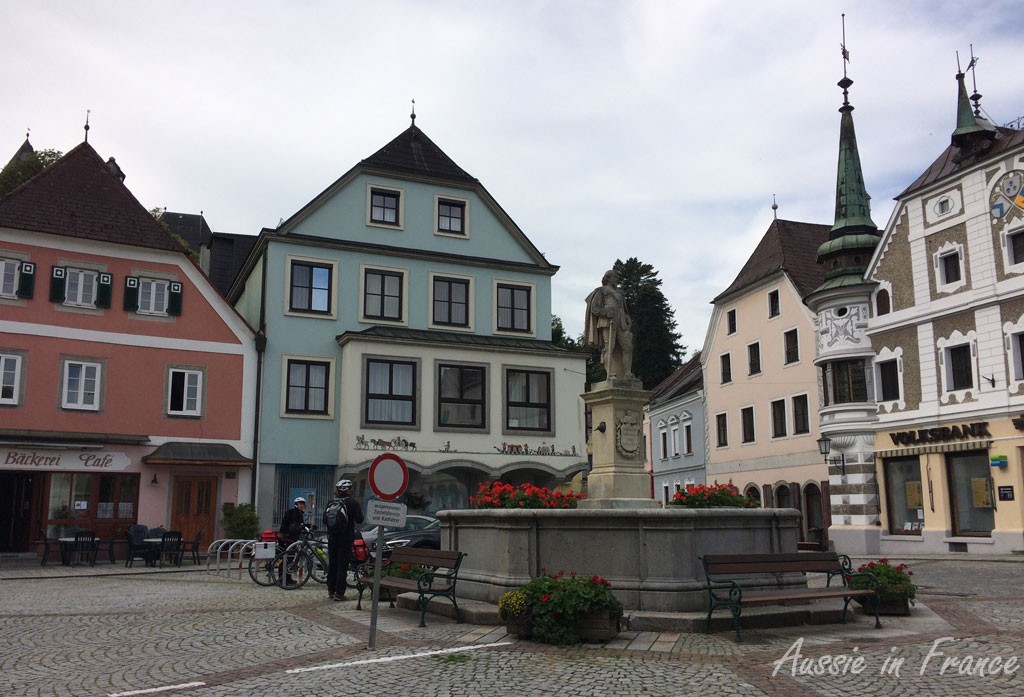 The historical centre of Grein

The little town of Grein has a very attractive historical centre, including Austria’s oldest theatre. 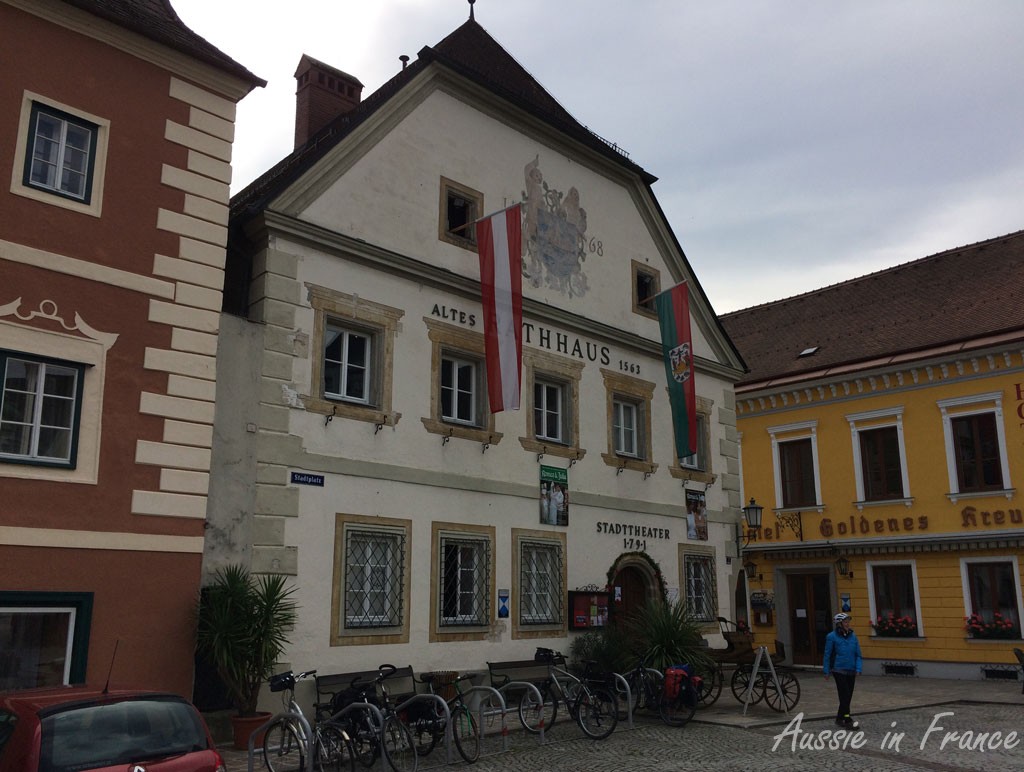 Austria’s oldest theatre, built in 1791 in the former granary of the town hall built in 1563

We find an excellent place to eat with a terrace overlooking the main square. We order the schnitzel of the day – breaded with almonds – and have a buffet salad and a glass of wine for less than 30 euro. More expensive than Hungary of course, but less expensive than France. 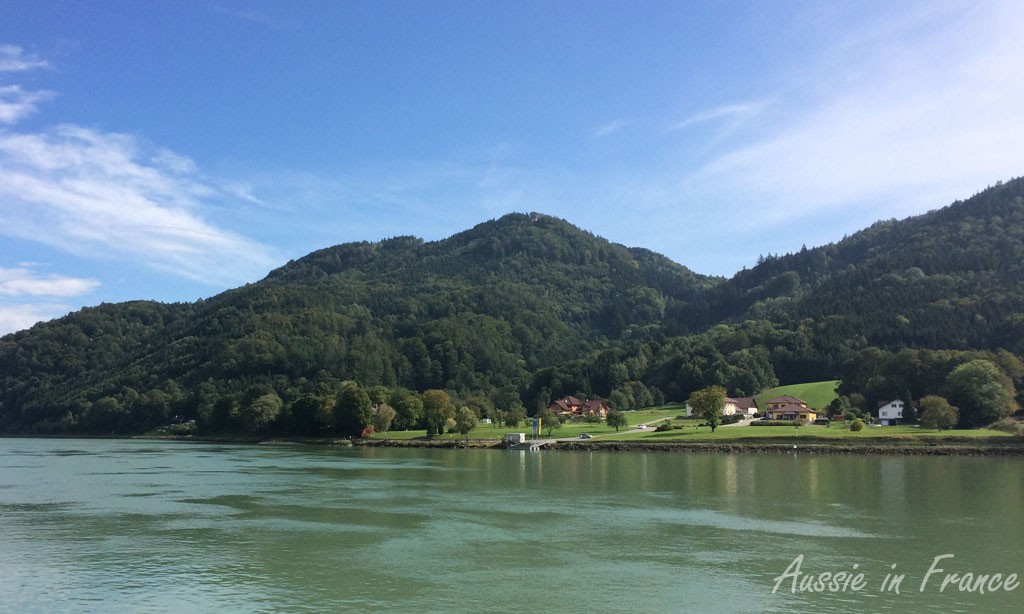 The Danube on the way back

We decide to go back along the way we came rather than stay on the Grein side and do a loop because although there is a bike path, it is mostly along the main road. The light has changed and gives us another view of the Danube. 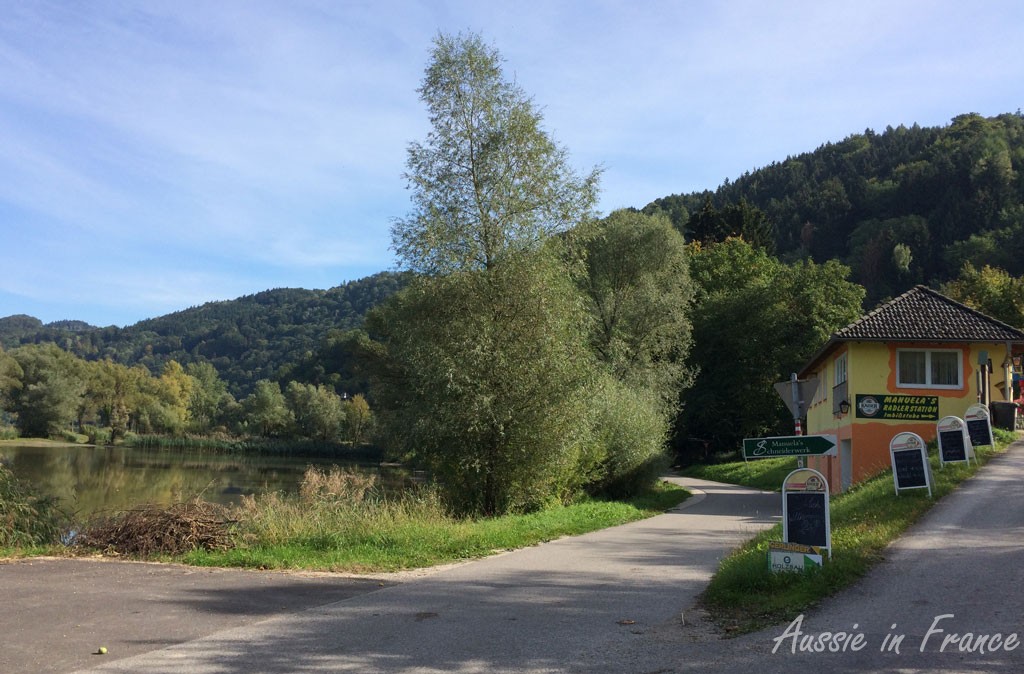 The Radler Station with its imbiss

On the way back, we see that the Radlerstation we noticed earlier also has a bar – an imbiss. I think it’s great that so much is done for cyclists here. 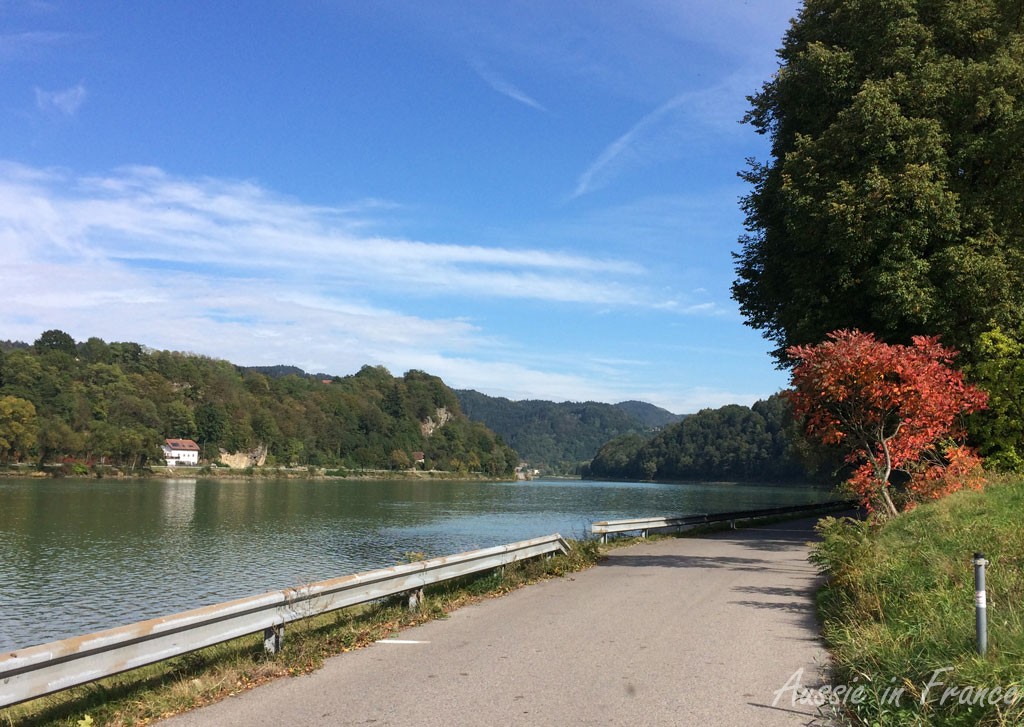 Autumn colours along the Danube

The fishermen are still fishing and we still don’t see any fish but friends have joined them in some places and there are a lot of barbecues and beer around. 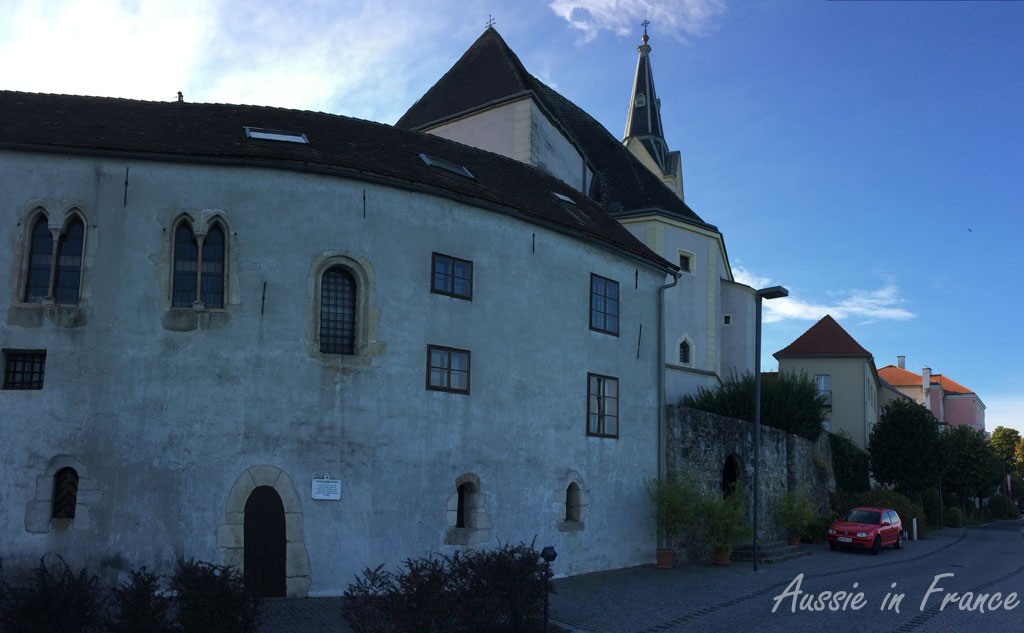 The mediaeval building in Ybbs

We cycle into Ybbs but are somewhat disappointed. It’s not nearly as pretty as Grein and everything is closed. We were hoping for an ice-cream. On the edge of the Danube, however, we see some older buildings, including what appears to be a mediaeval construction (the tourist office is closed and we seem to have forgotten our guide book to Austria) – but still no ice-creams. 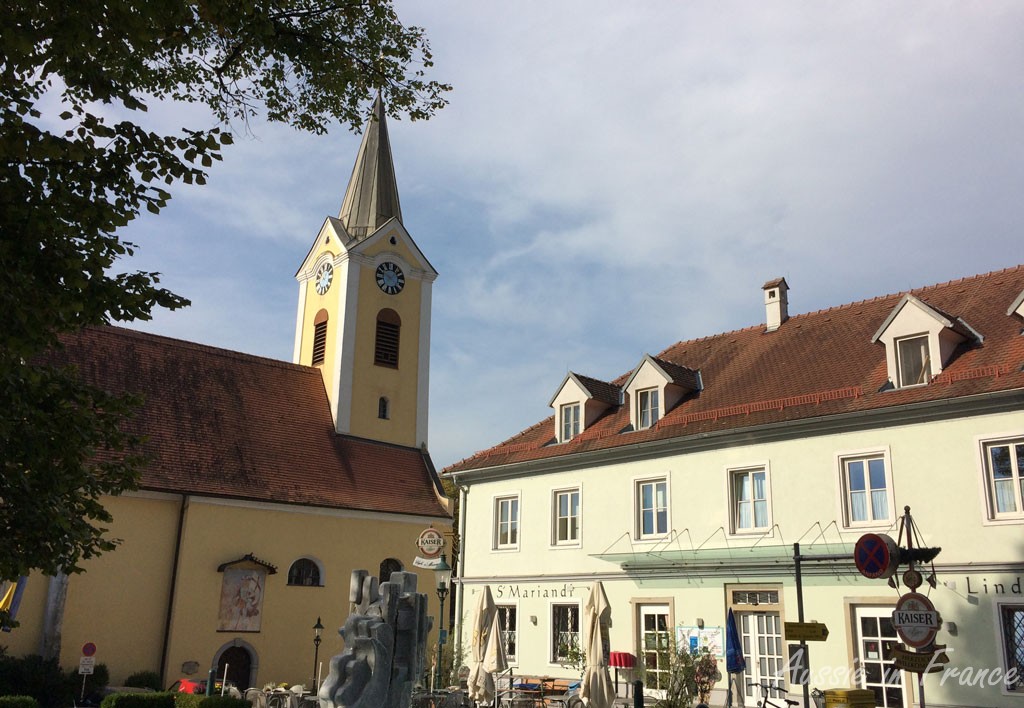 We manage to find the bike path to cross the river this time and cycle down into the centre of Persenbeug. I immediately see a café with Italian ice-cream so we are rewarded for our 59 K in 4 hours. At least this time we weren’t stressed about nightfall. We got back to our Radlerpension in Hagsdorf at an unprecedented 4.30 pm.

The view from the bike path into Hagsdorf

The weather forecast for tomorrow was supposed to be sunny and 19°C but all those Grüss Gotts don’t seem to be working. It’s now going to be overcast and 15°C. We may have to move on instead of staying another night. Sigh.

This entry was posted in Accommodation, Austria, Cycling, Sightseeing and tagged cycling on the Danube, eurovelo 6 route in austria, Melk. Bookmark the permalink.