Posted on November 9, 2015 by Rosemary Kneipp

Another beautiful sunny autumn day when it’s warm enough to cycle. I’ve been wanting to see the gardens at Château de Villandry ever since Susan from Days on the Claise mentioned that the late summer planting was at its peak and the famous potager garden looking splendid. There is a dedicated bike route from Tours to Villandry that is about 20 K and flat all the way. As it runs along the Cher River most of the time, it should also be well exposed to the sun. 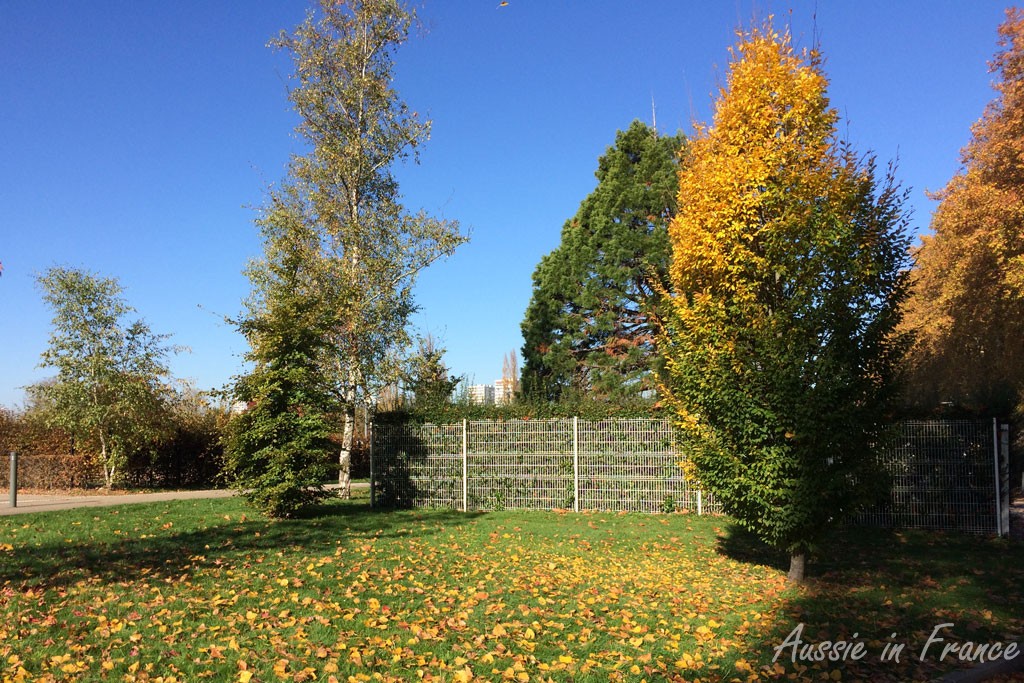 The beginning of the bike route at Centre Aquatic du Lac

It takes us about 50 minutes to get to the Centre Aquatic du Lac. At midday, it’s a little nippy but with caps, windcheaters, jeans, gloves and a scarf, (most of which we later discard), it’s very pleasant. Our path takes us through a park with a lake in the middle – Lac de la Bergonnerie – which is obviously very popular with the locals which is not surprising when you see all the high-rise buildings on the other side. 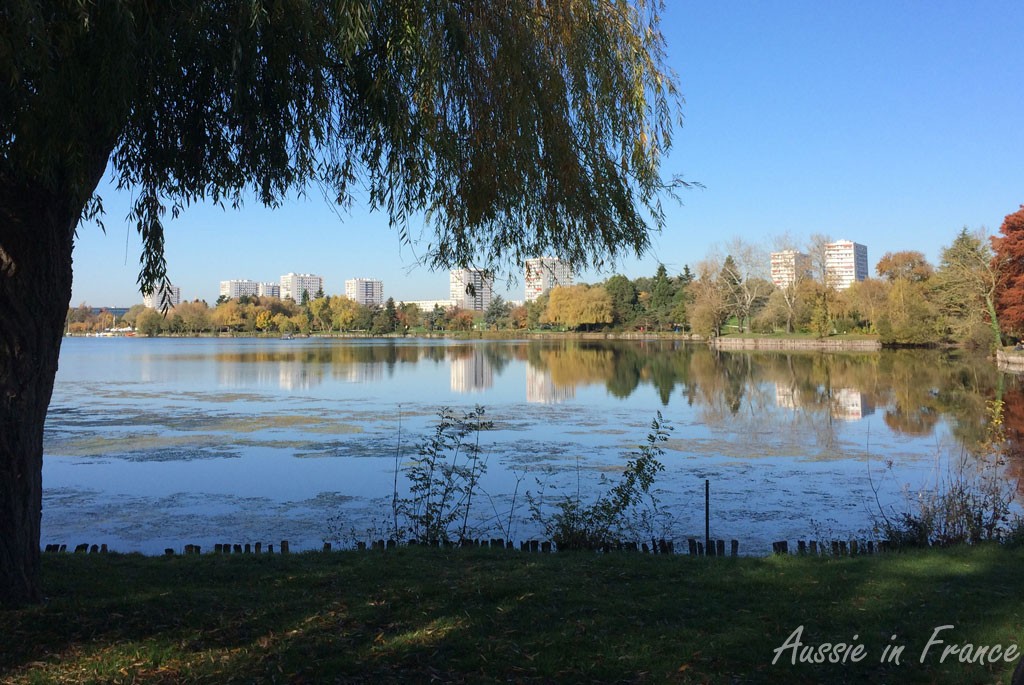 View of Lac de la Bergonnerie from the bike path

After the lake, we go past a series of allotments that even have “dry” public toilets. I wonder why there aren’t more of these along the Loire à Vélo bike route (which is part of Eurovélo 6 from the Atlantic to the Dead Sea)? Clean, fresh smelling, right next to the bike path. 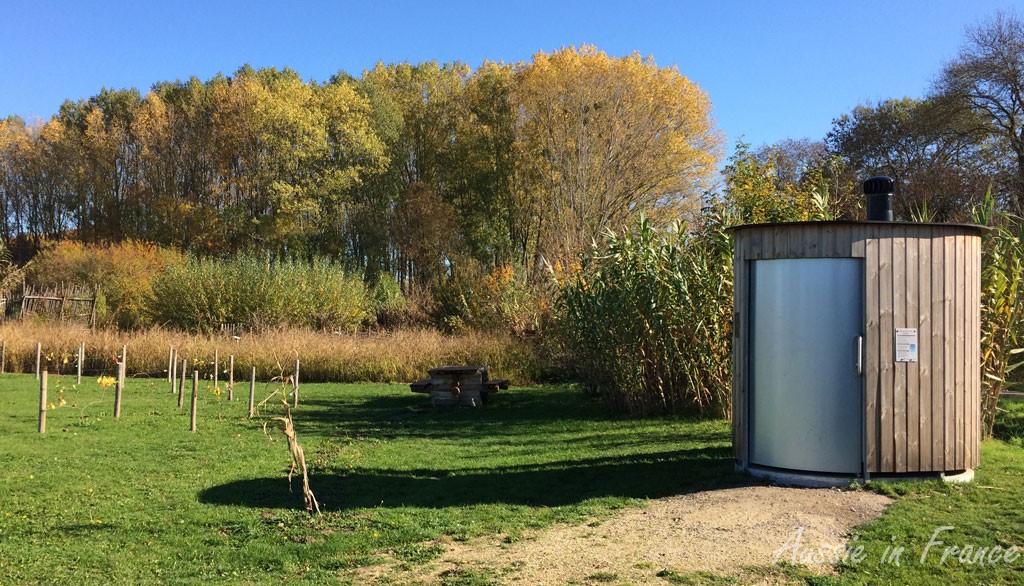 The very practical dry toilets near the allotments

A little further on, we ride through a 9-hole golf course which has a 18-hole putting green, Golf de la Gloriette, which seems rather less sophisticated than most golf courses. I check it out later and see that the green fees are about half what you pay at La Carte golf course near Chouzy-sur-Cisse. I’m not a golfer myself but I think it’s good to make the game more accessible. 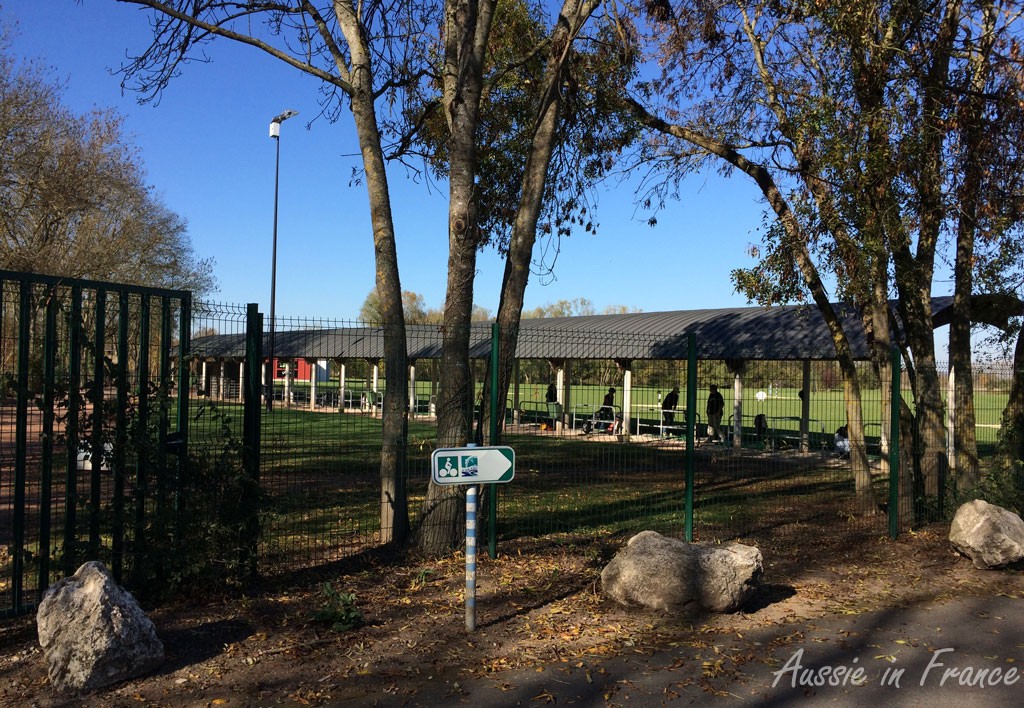 The putting green at the golf course

After a while, we join the Cher and the Port du Pavé du Roy, reinstated a few years ago and the site of various riverside activities in the summer and, in particular, a trip on La Jocondie* to discover the wildlife and flora of the Cher. 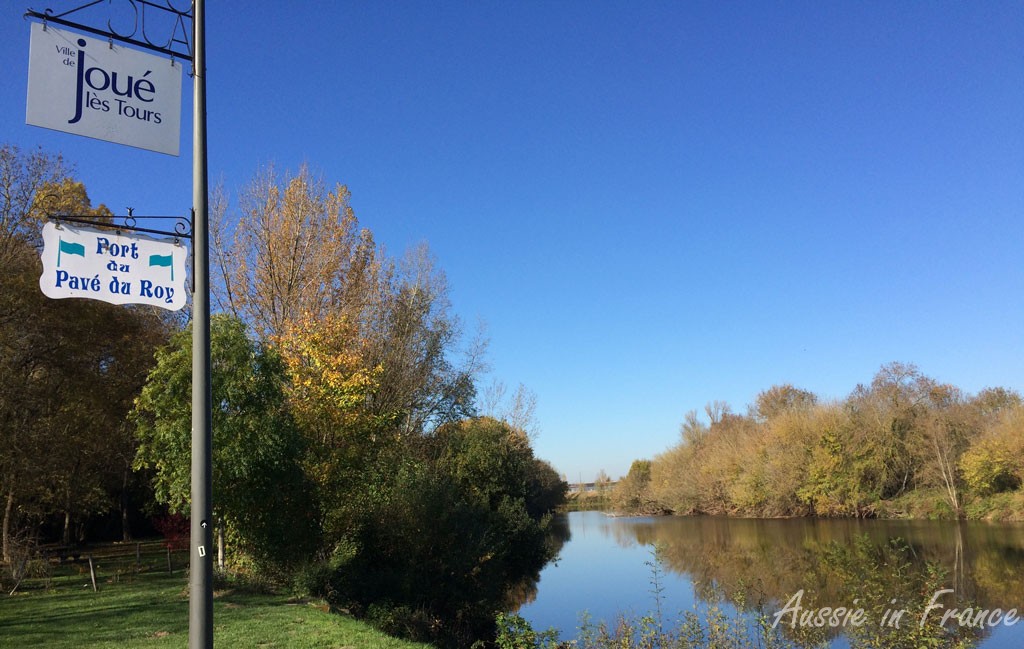 Further along we come to an small industrial flour mill, Grand Moulins de Ballan, and behind it, we discover the old mill house with its wheel still intact. 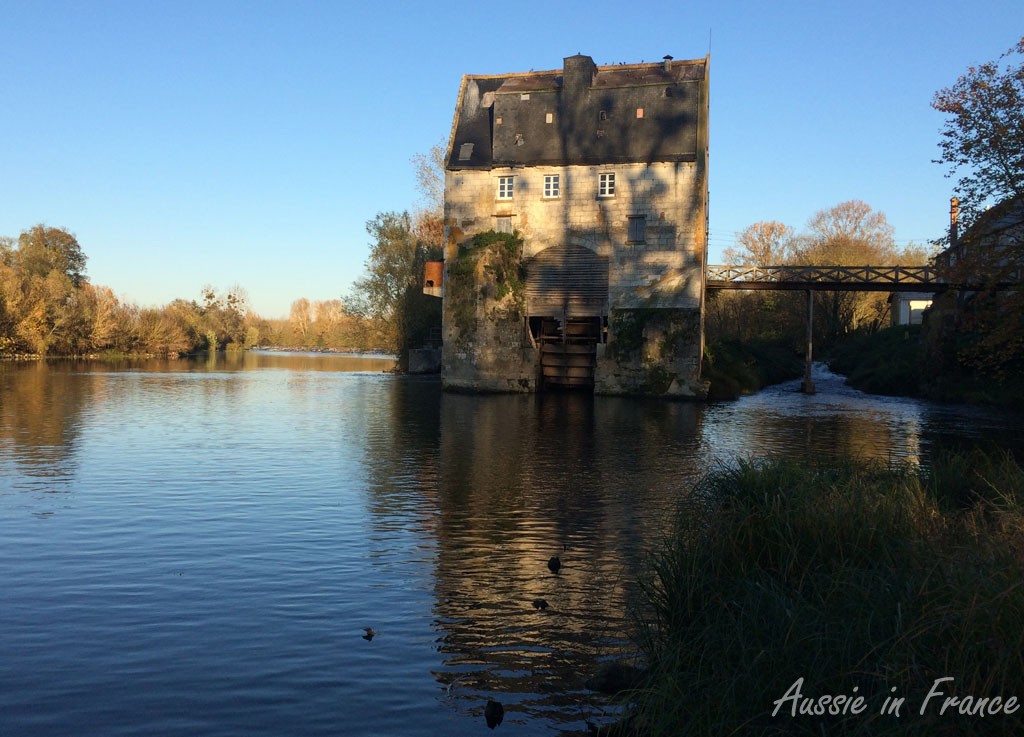 We soon arrive at the little port of Savonnières with several traditional flat-bottomed gabarre boats resting serenely on the water. 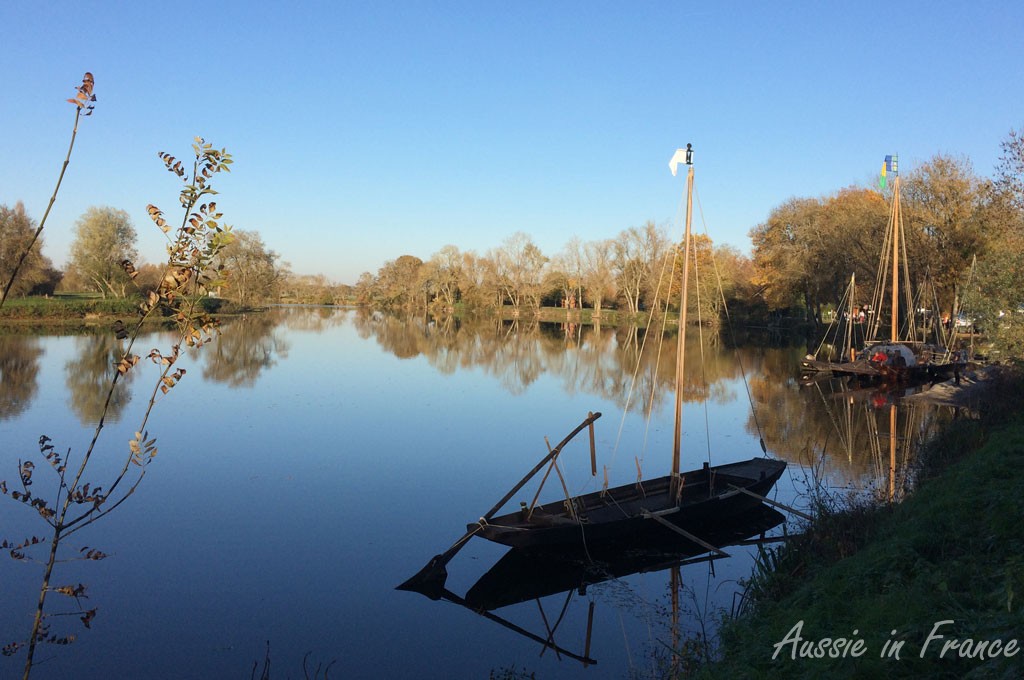 Flat-bottomed boats on the Cher at Savonnières near Villandry

Since we’re hoping to eat here, we leave the bike path and join the main road at the little church with its beautiful sculpted archway. The only restaurant open is way above our price range so we go back down onto the 3-kilometer bike path leading to Villandry. 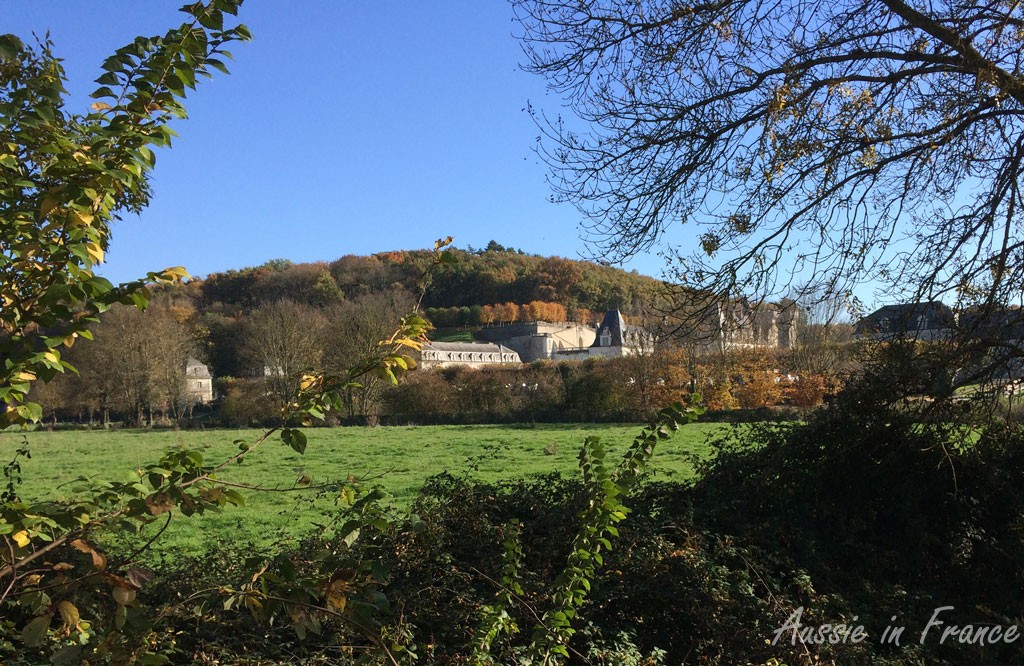 Villandry from the bike path

Château de Villandry soon comes into sight after we turn left away from the river. 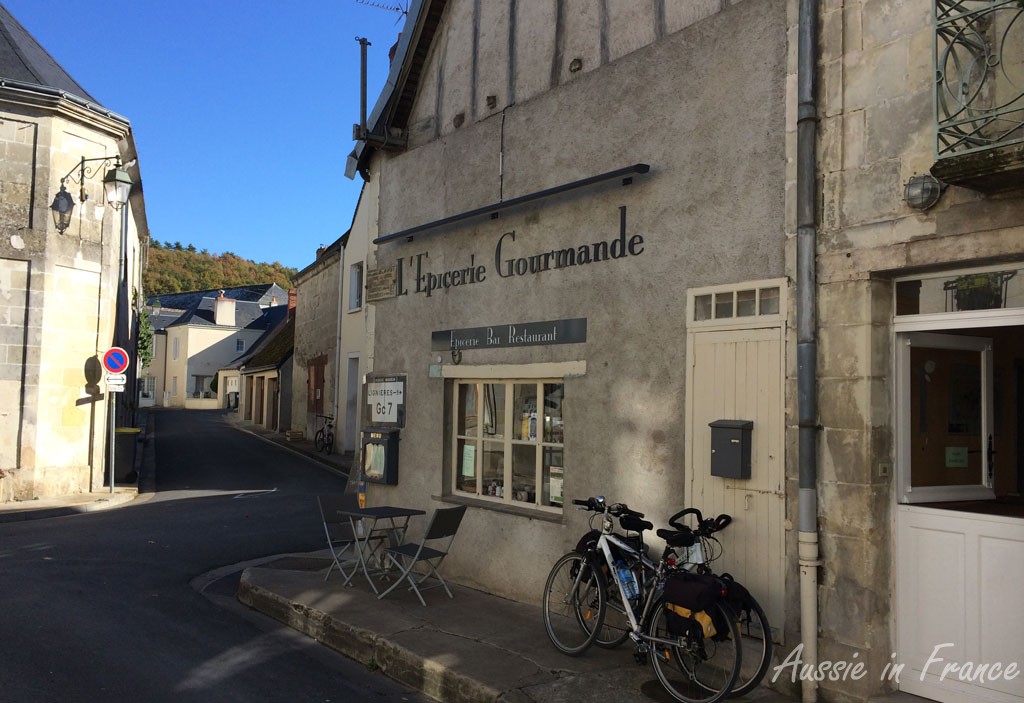 L’Epicerie from the outside

There are several restaurants on the main road at Villandry but none of them appeal to us. I see a sign pointing to a “tea room” in a side street, that takes us to “L’Epicierie Gourmande” (the gourmet grocery”). We see several bikes in front which is promising. 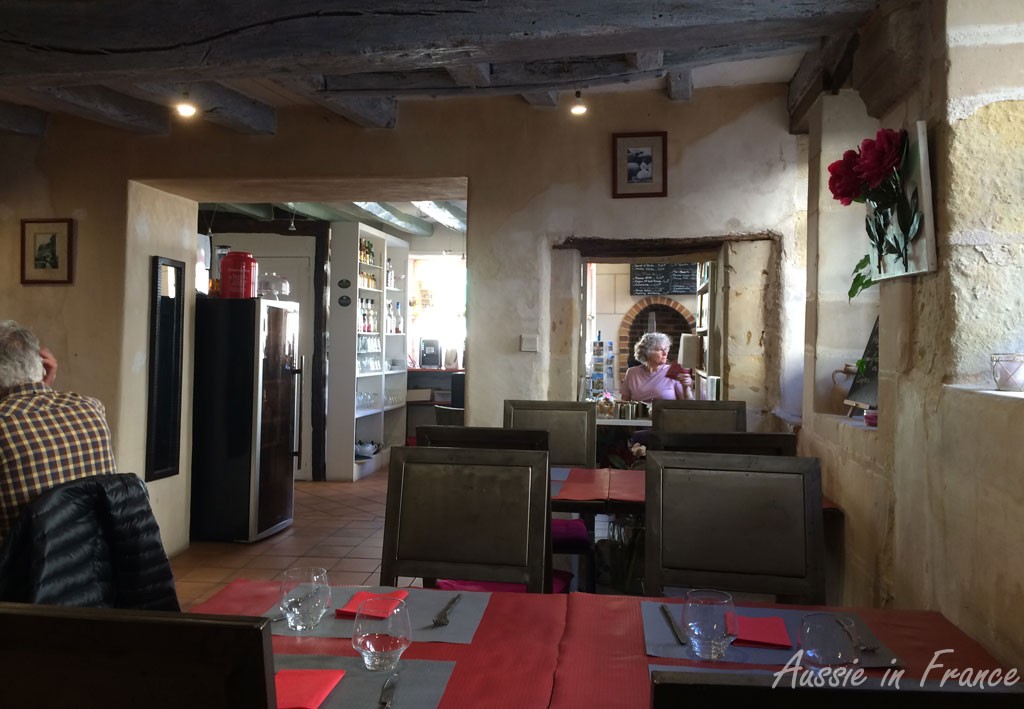 Inside l’Epicerie on the restaurant side

Inside, the décor is very simple and attractive, with exposed beams, stone walls and a large open fireplace. We have an excellent lunch – terrine de foie gras (copiously served) and a quiche, accompanied by a local wine (of course). There are no cooked dishes as such. Everything comes from the grocery section except for the dessert which is supplied by a local pastry shop. Exactly what we wanted! You can of course buy supplies from the grocery and have a picnic outside in the summer. 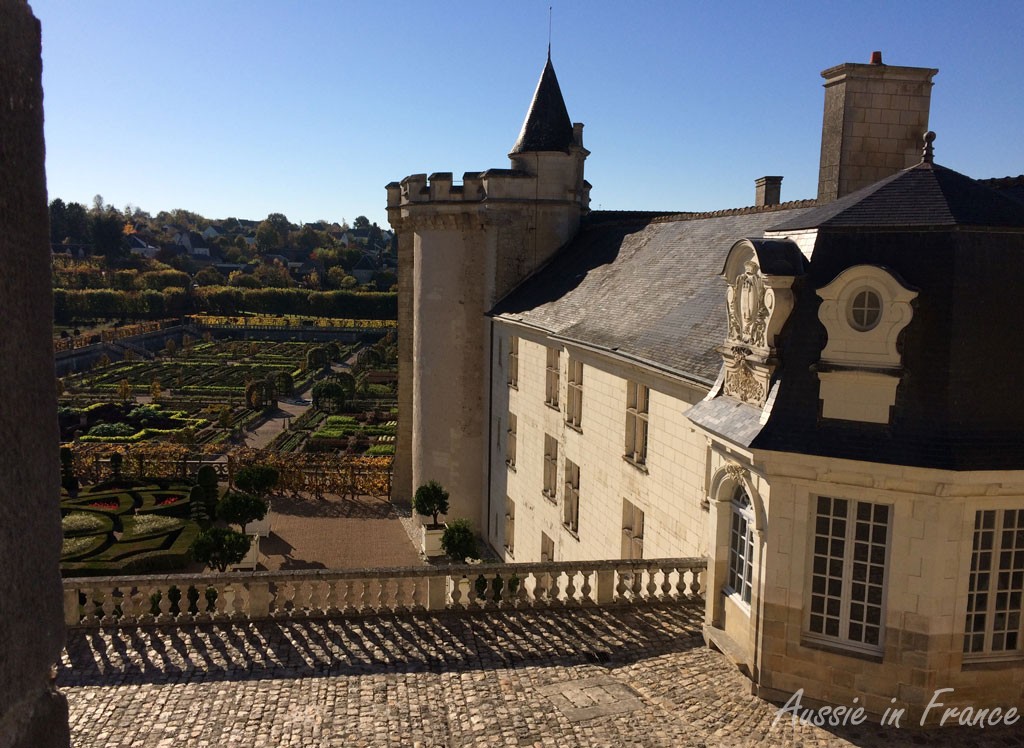 The château and gardens from the terrace

We continue on to the château and buy tickets to the garden only. We’ve visited the inside before but it’s not very interesting. However, we discover that there is an amazing terrace at the back of the château that affords a breathtaking view of the gardens. 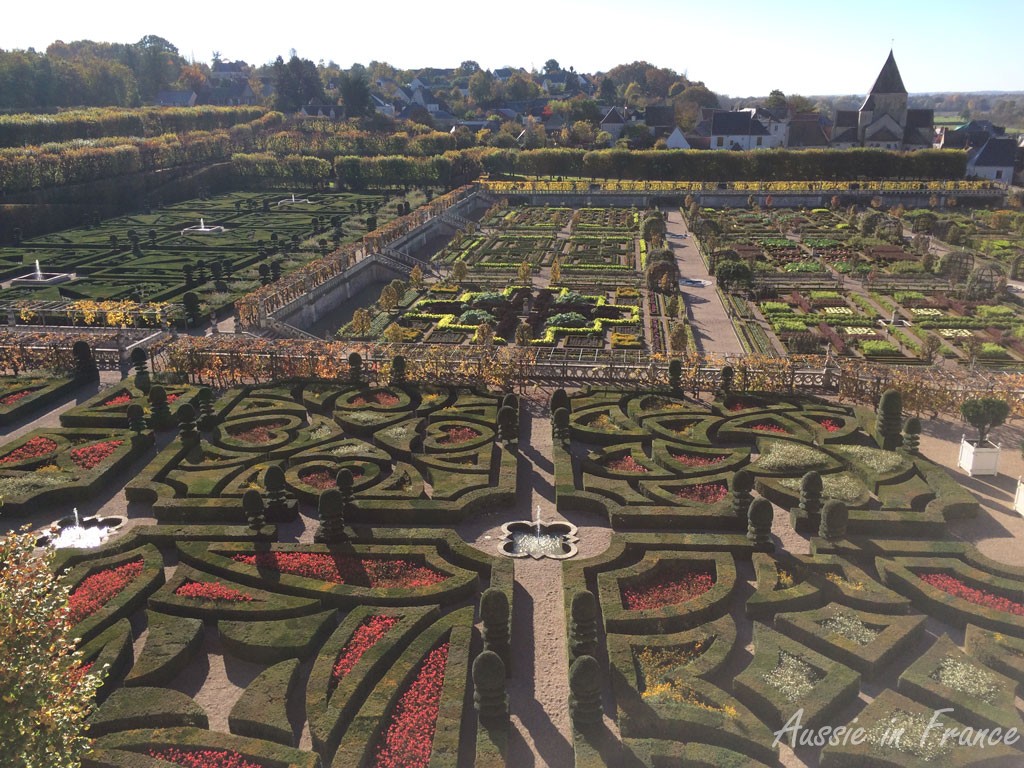 The love gardens at Villandry

Just below is the four-part “garden of love”, seen in the foreground in the photo. From top left in a clockwise direction: “Tender love” is symbolised by hearts separated by flames of love in the corners of the square. In the middle are the masks used during balls to disguise the wearer. “Passionate love” still has hearts but this time, they are broken by passion. The boxwood bushes forms a labyrinth to evoke the giddy round of dance and passion. “Fickle love” is next: the four fans in the corners symbolise the transient nature of love while between the fans are the cuckold’s corns. In the middle there are love letters. “Tragic love” comes last with the daggers and swords used for the duels of rival lovers. In summer, the flowers are red to symbolise the blood spilt during combat. I can hear a group of teenage girls nearby discussing the symbolism. 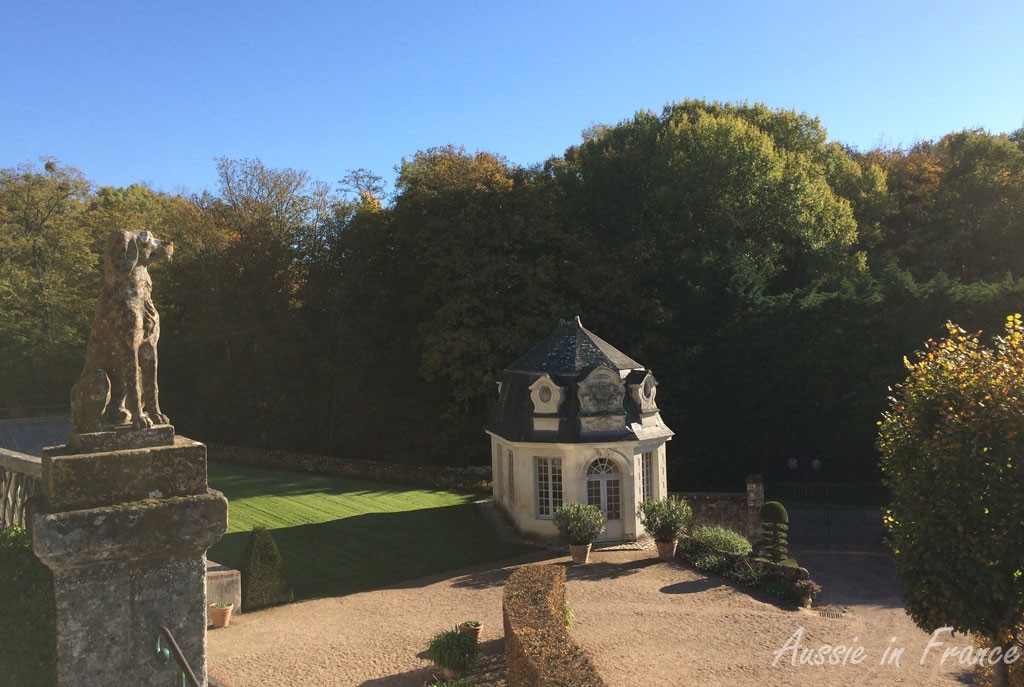 The watchdog and little pavillon

We walk along the path overlooking the gardens until we come to a narrow flight of steps guarded by a very friendly-looking dog, with a little pavillion at the bottom. 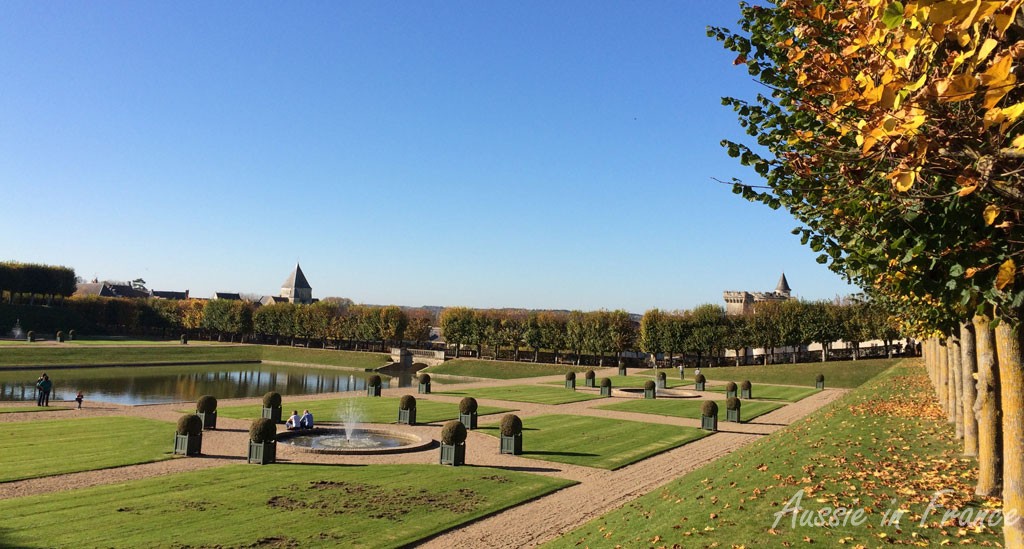 The formal garden and canal at Villandry

The formal garden below looks very serene with its little fountains and central canal. 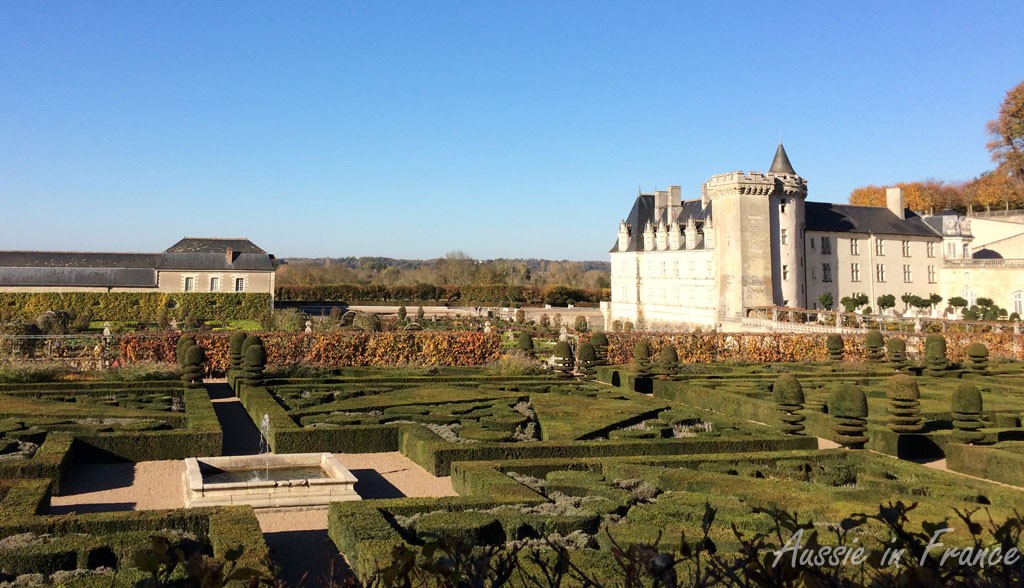 The gardens at Villandry with the vegetable gardens in the background

Beyond the canal is the famous vegetable garden and the other façade of the château. 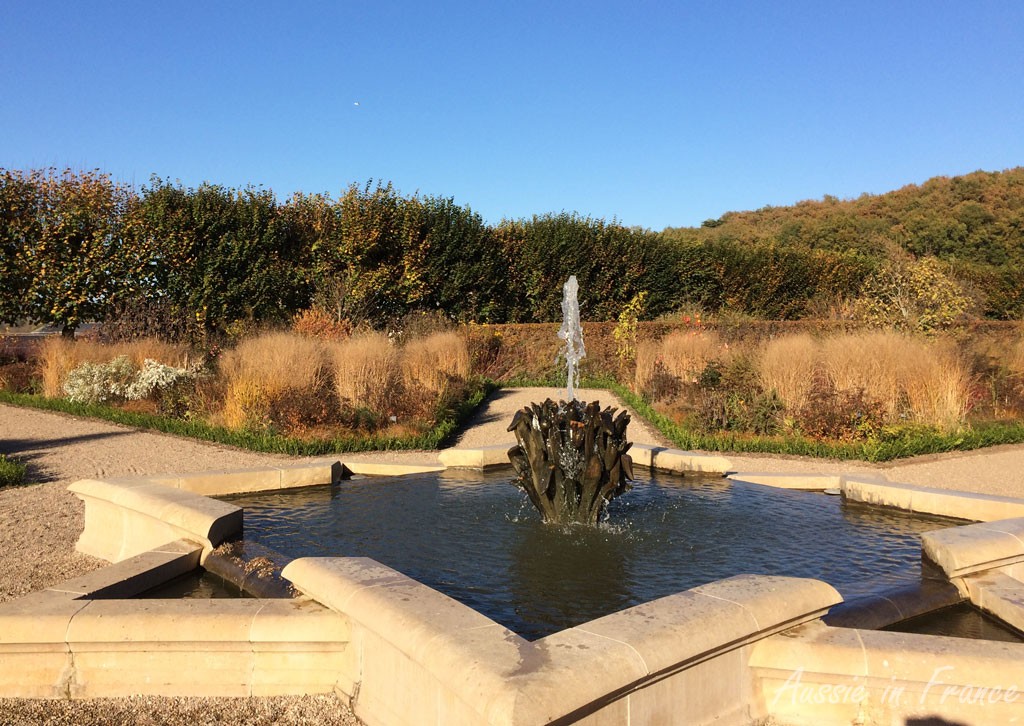 The perennials garden in Villandry

But first we go to the hardy perennials because we’re trying to find plants to decorate the slope leading up to our little wood. We identify a few specimens we can try out. 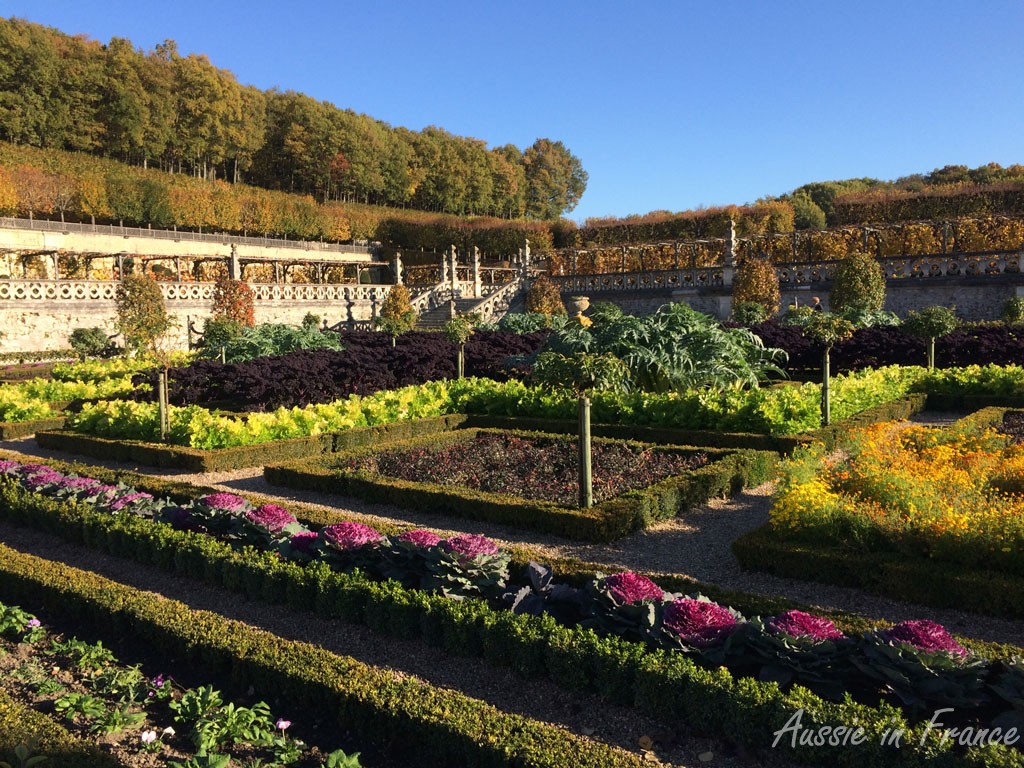 The vegetable garden in Villandry with its decorative cabbages

We then spend a lot of time in the vegetable garden, with its colourful cabbages, luxuriant asparagus ferns (the real thing), capsicum, celery, leeks and other decorative yet edible vegetables. 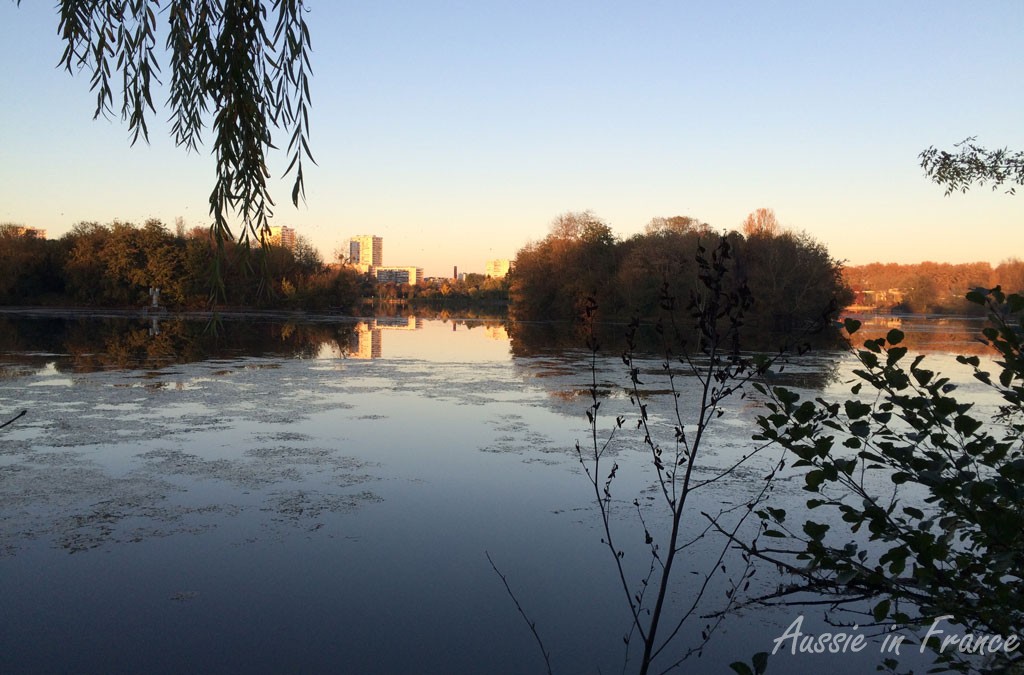 The lake at the end of the bike path at sunset

A quick tour of the garden shop and we’re back on the bike path, as daylight saving is now over and we have to be back at the car by 5.30 at the latest. We arrive just in time, as usual.

We’re delighted to have added another great bike itinerary to our already large collection. We’ll be back in the spring!