I used to have a German friend and every time she came to my house in Fontenay sous Bois, she would look out the window and say “there’s a blue tit” or “there’s a nuthatch”  which always made me very envious so when we came to live in Closerie Falaiseau in Blois I decided that I would learn to recognise the birds in my garden too. I checked with my friend Susan from Days on the Claise whether we should feed them because you’re not supposed to do so in Australia for survival reasons but she reassured me that we could feed them in winter without any problem as long as we did so regularly. 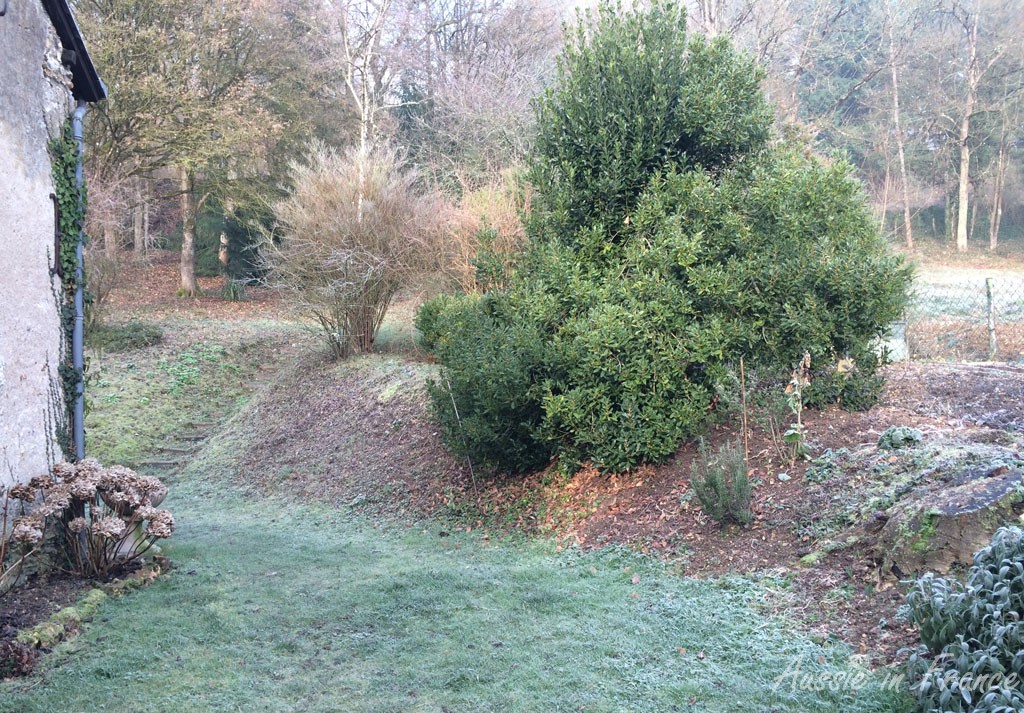 When it’s this cold, garden birds need all the help they can get

So we waited until we came to live here permanently last winter. We bought some bird seed and some fat balls as well as a couple of feeders to put up in our rose of Sharon tree in the front yard. We also put a feeder on the window sill outside the downstairs living room. We already had a bird bath. Soon we had lots of blue tits and great tits, mostly in the rose of Sharon tree. 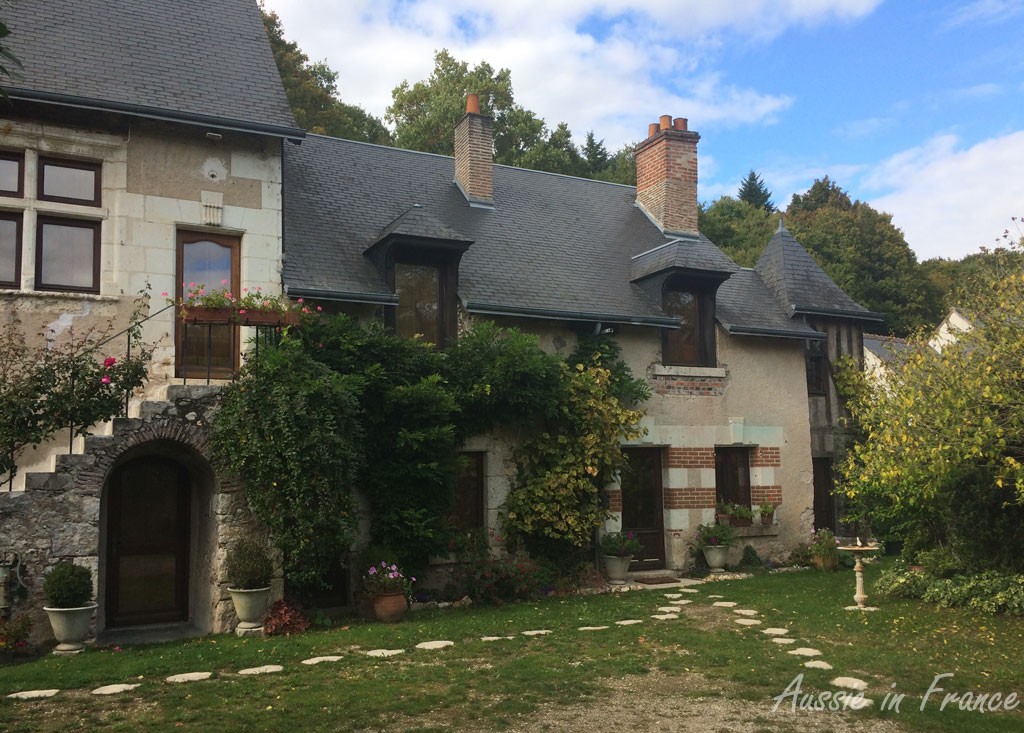 The rose of Sharon tree is on the right. The nesting boxes are under the eaves above the wisteria in the middle of the photo.

This summer while the new kitchen window was being made, we ate outdoors every day and spent a lot of time watching the tits during mealtime. We were delighted when we saw that they had made a nest in the nesting boxes under the eaves above the wisteria. We soon saw some fledglings poking their little faces out of the holes. I might add that below the wisteria we were surprised to see wheat growing – obviously from the seeds the birds didn’t eat last winter! 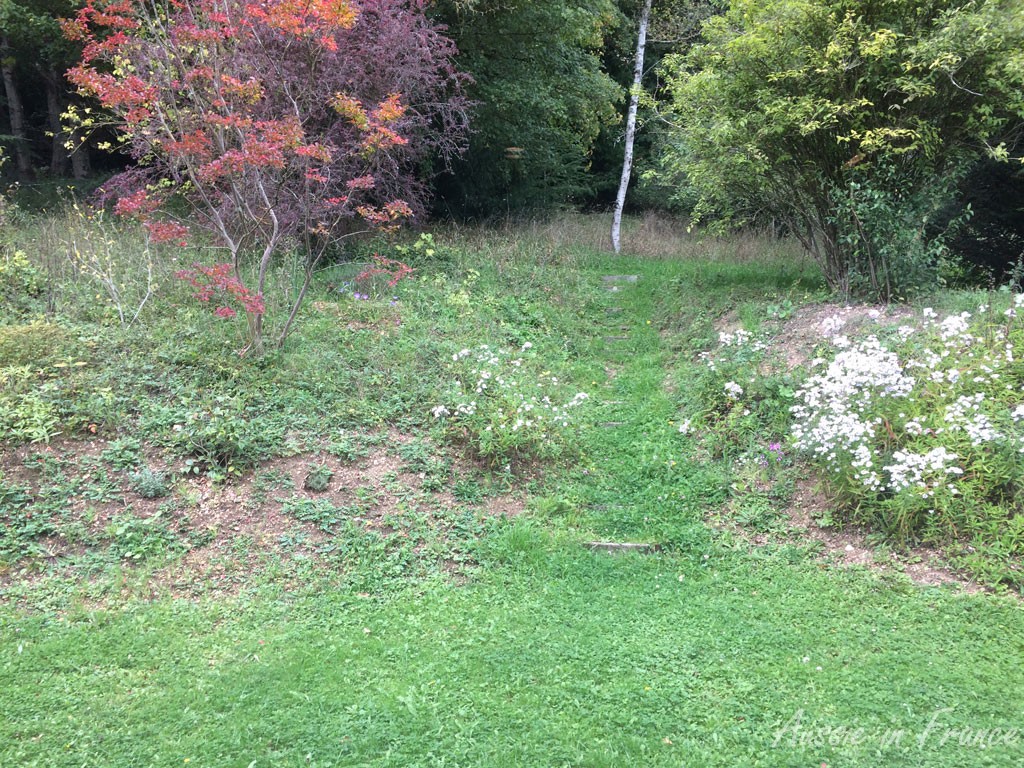 The view from the kitchen window in autumn

When we came back from our holiday in Eastern Europe in October we started seeing birds from our new kitchen window although it was too early to feed them. One day I saw a large black and white bird with a red bit under its tail on the tree outside. I was so excited to learn that it was a great spotted woodpecker. 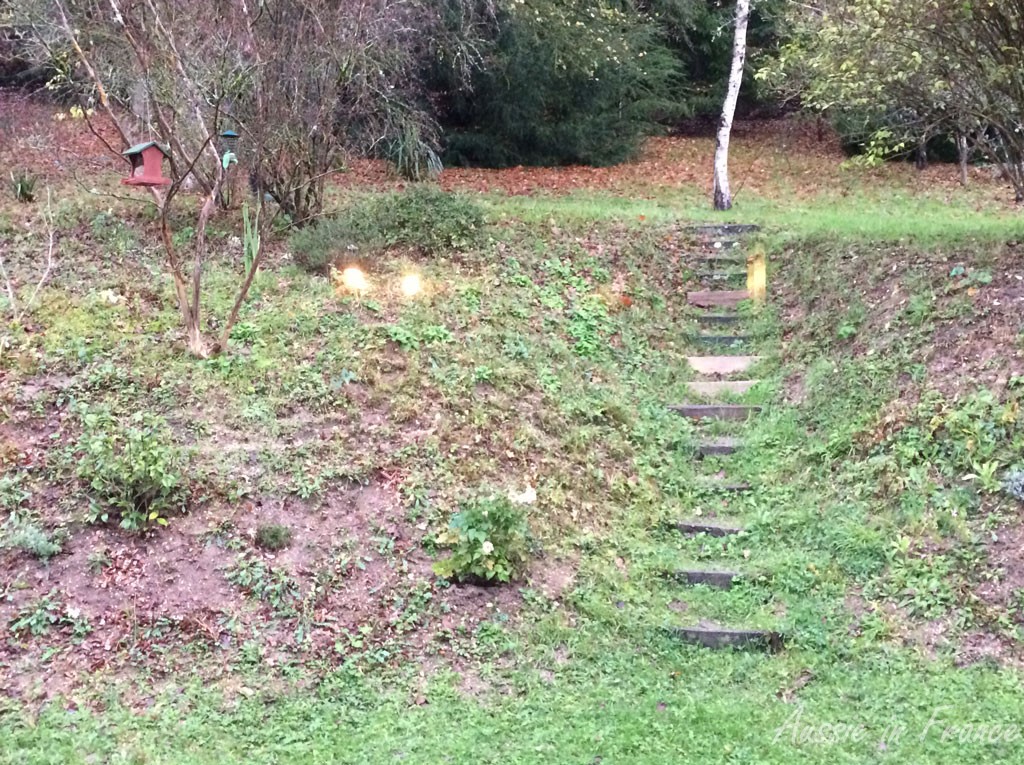 You can see the difference between this photo and the last one. Most of the leaves have gone.

The weather started getting colder so Jean Michel put out the fat balls and some mixed bird seed in a new hanging feeder. We also bought some sunflower seeds that we put in a feeder on the sill in front of the kitchen window. The birds soon discovered the feeder and we started to identify new ones.

We now have blue tits, great tits, marsh tits and crested tits, green woodpeckers and great-spotted woodpeckers, red robins, nuthatches, jays, common chaffinches, magpies and blackbirds. They are so quick that you can’t take photos of them but I discovered that it’s easy to film them.

Our new sunflower seeds turned out to be full of debris – little twigs and such – that the birds throw out of the feeder onto the windowsill. We’re not buying birdseed from Gamm Vert any more! We whiled away many delightful moments watching the antics of our little feathered friends. 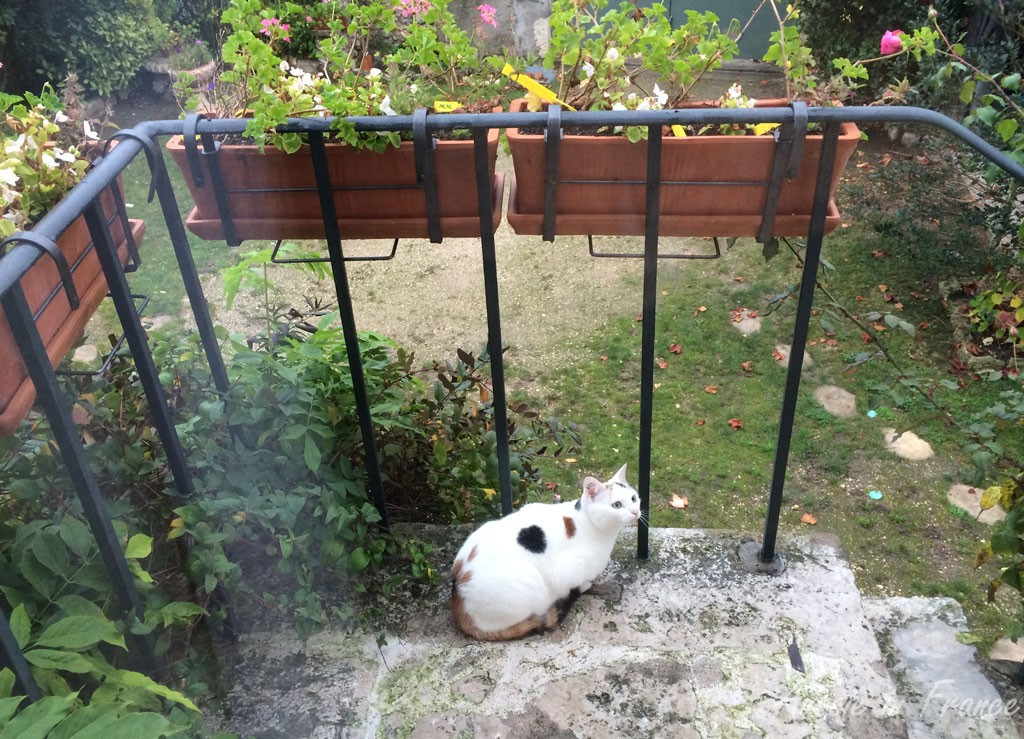 Java, sitting at the top of our stairs, pretending she’s not there

Then disaster struck. Our neighbours have a white cat called Java that seems to spend more time at our place than theirs. We suspect that some of our paying guests gave her a little nourishment in September. She is a hunter and loves our little wood where she runs after mice and lizards.

When I saw her face peering over the kitchen windowsill one day, it didn’t occur to me that she might be after the birds. Jean Michel found her pulling apart two blue tits on the ground below the window one morning before I went outside thank goodness. I was devastated when he told me what had happened. Now, I know that’s what cats do but we get a huge amount of pleasure watching these little birds and it was terrible to discover we had inadvertently exposed them to danger. 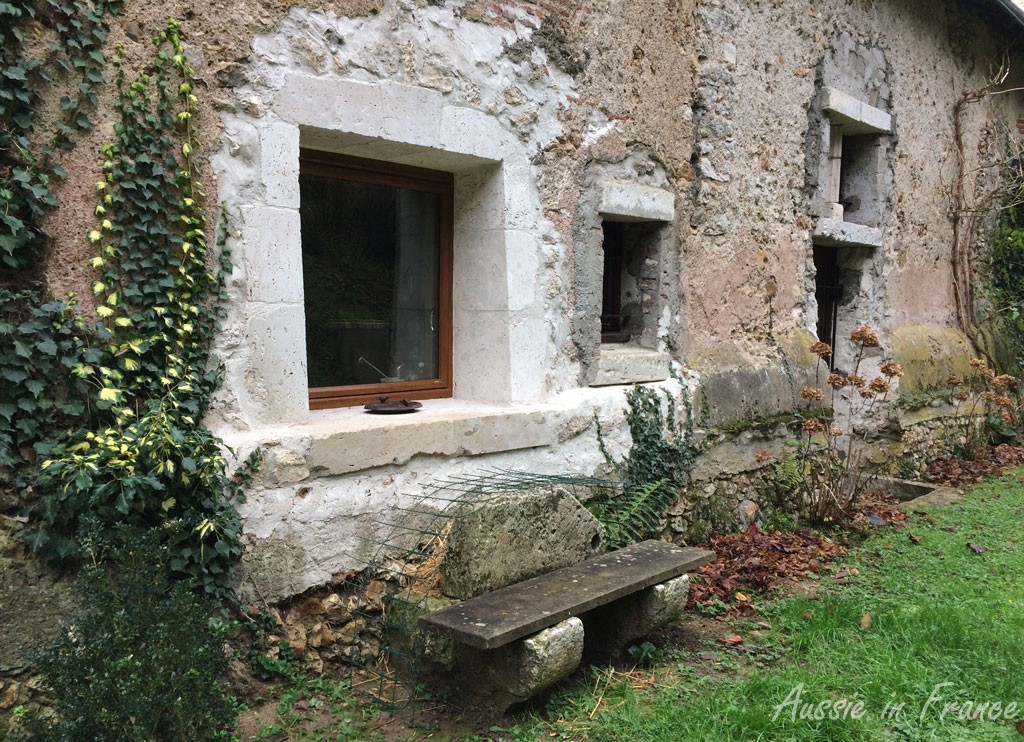 You can see the netting over the bench under the window

Jean Michel found an excellent solution – he used some wire fencing to cover the stone bench outside the window that the cat was using to spring on the unsuspecting birds  Now she has nothing to grip on. After two or three days the birds started coming back, first the blue tits and then the little crested tit who is my favourite.

But Java is no Sylvester and is a lot more cunning. Because she’s white, she can blend perfectly into the stone around the window. Without using the bench, she managed to sit on the window sill, apparently, staying perfectly still until an unsuspecting little blue tit came along and we had another death.

We were reduced to only putting out seed while we could monitor the presence of Java so we looked for another solution. Someone suggested putting a bell round her neck but Jean Michel says we’ll traumatise her (not that I really care!). He doesn’t want to put cat repellent out either because it might frighten away the birds as well and we’ll never get rid of the smell. 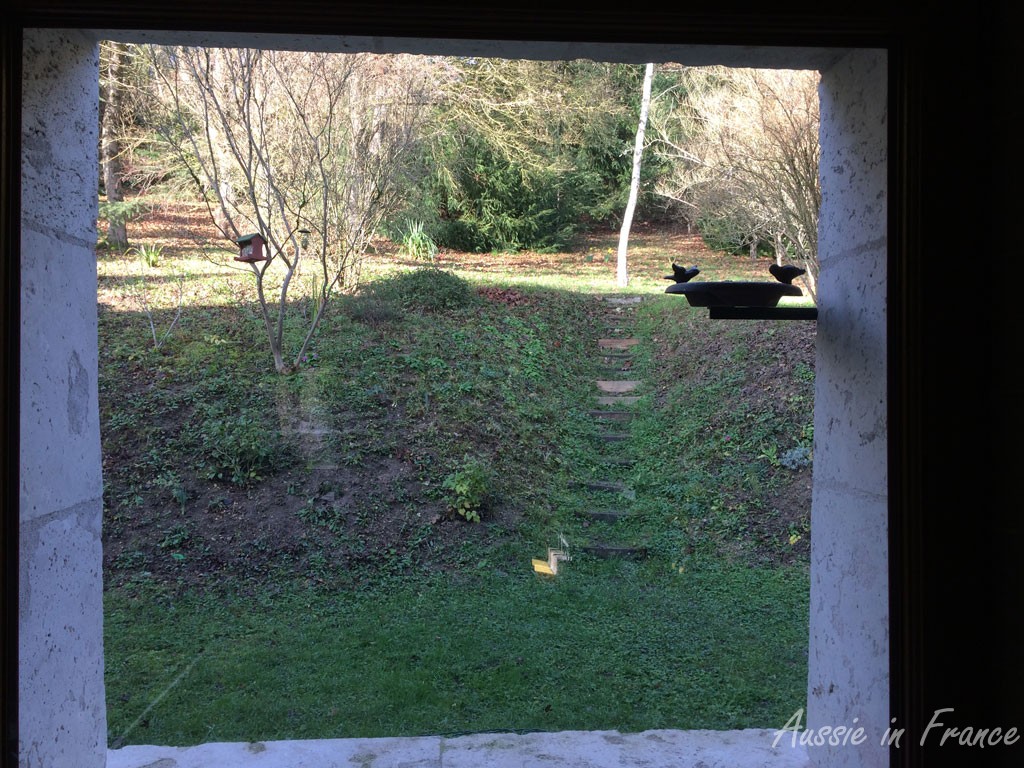 On Sunday, we went to Truffaut, the big gardening store and had a look at the options. There was nothing at all suitable but Jean Michel came up with another idea and here it is! Within a very short time the birds were flocking to the feeder and staying longer each time. We really don’t see how it’s possible for a cat to jump that high. I hope not anyway.

This entry was posted in Closerie Falaiseau, Flowers & gardens and tagged birdfeeding. Bookmark the permalink.

8 Responses to Outwitting the Cat