Posted on September 28, 2015 by Rosemary Kneipp

We leave Serbia without regret and pass the border into Romania on the other side of Derdap dam. It’s raining and we thank our lucky stars for yesterday’s perfect weather for visiting the Iron Gate gorges. 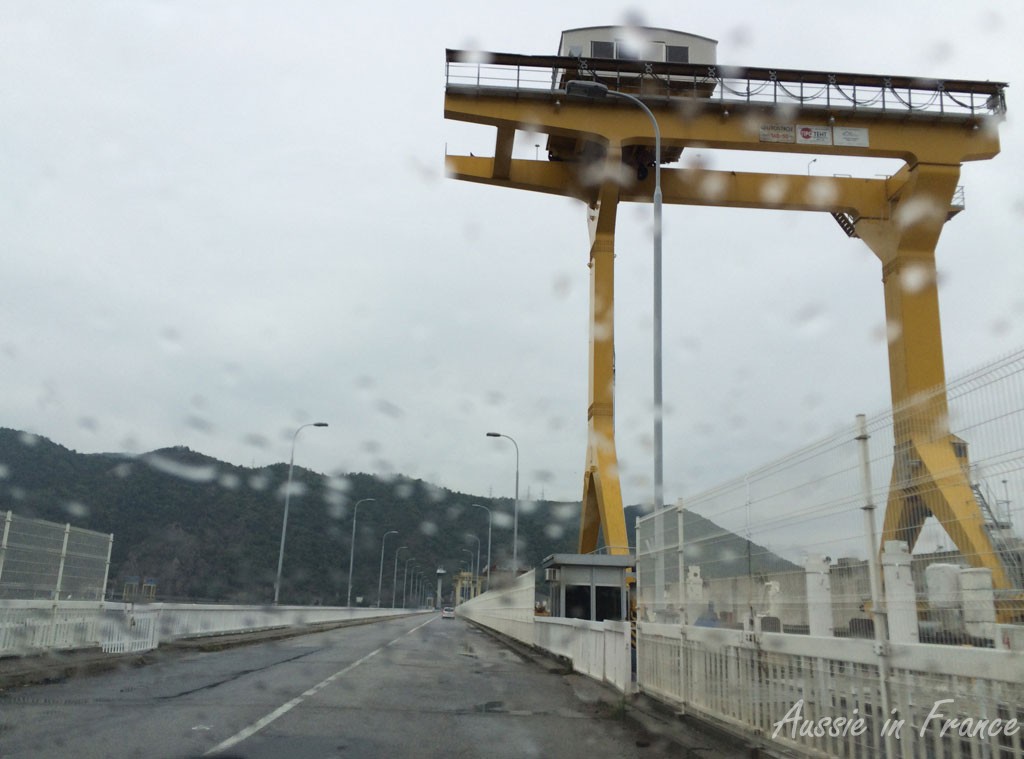 Crossing the Derdap dam in the rain

There is an immediate change in the built environment. Although many of the constructions are still delapidated, the impression as a whole is much brighter, particularly the gaily decorated houses. Each village also has a sparkling white church in the middle.

Our lunch stop is Lugoj, a pretty little town built on a river with the usual contrast of old and new. We eat our picnic in the car because the temperature is only 12°C then have coffee in a café where we use our Romanian lei for the first time. A cappuccino costs the equivalent of 80 eurocents. 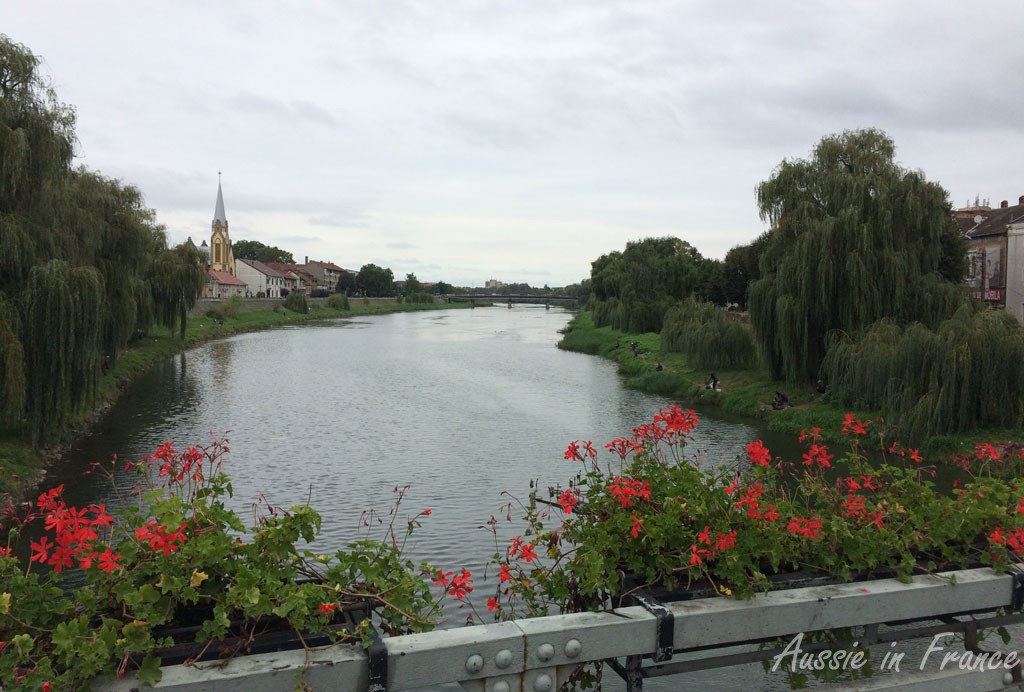 View from the river during our lunch stop in Lugoj

We arrive at the Savoy Hotel, a 4-star in the Mariott group where we have a large bright room which also has a small table and chairs. Sheer luxury after our recent accommodation. We book for a second night which costs a bit more (65 euro as opposed to 52) because it’s no longer last minute. 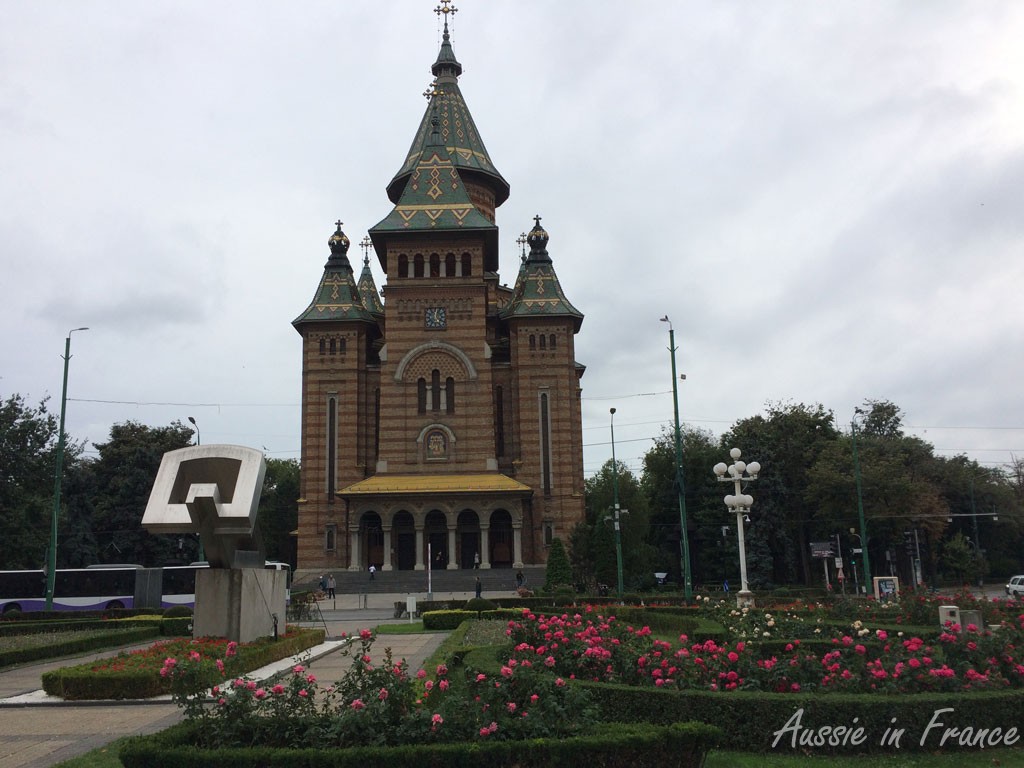 The Cathedral in Timisoara

We leave again almost immediately to discover the town centre which is just across a bridge over the canal only a few minutes from the hotel. It is no longer raining, just overcast and a bit warmer. We start with the Orthodox Cathedral, where a wedding is just finishing and a baptism starting. Built between 1936 and 1946, this impressive building can hold 5,000 people. 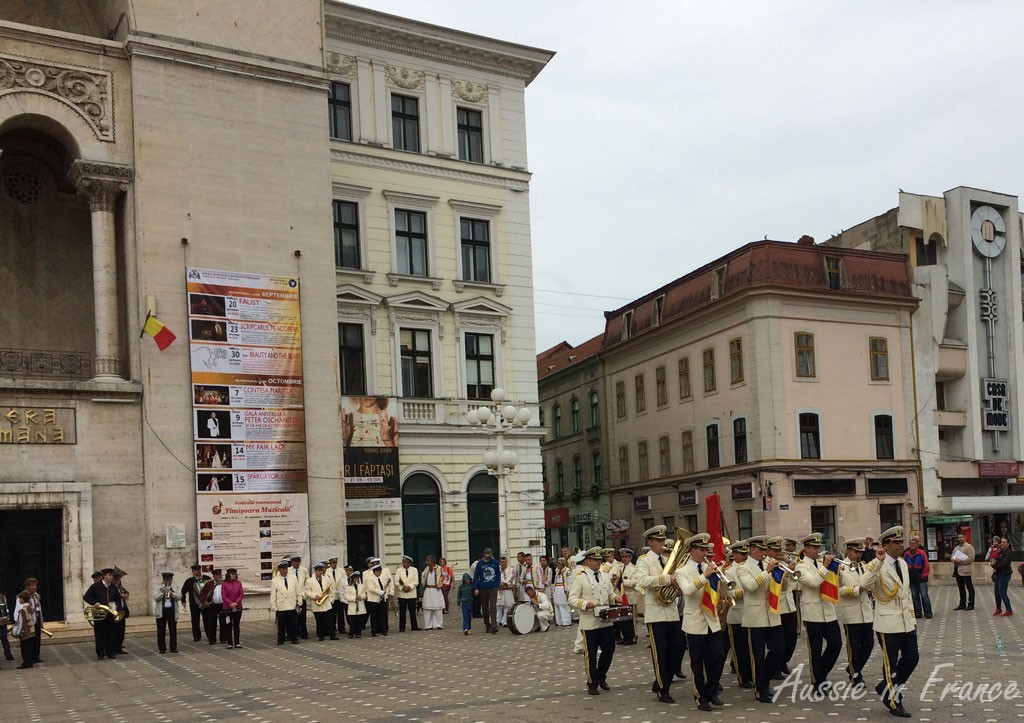 A brass band in Piata Victorei

We wander down to Piata Victorei which is full of Sunday crowds. At the Opera House end there are eight brass bands performing to loud applause. The whole place has a nice feel to it.

Piata Liberitii – my first attempt at a panoramic photo

A little further on we come to Piata Liberatii, currently being renovated. I’m very impressed with the efforts being made to give the town a facelift. It’s a European Capital of Culture candidate city for 2021. I hope that it is chosen. 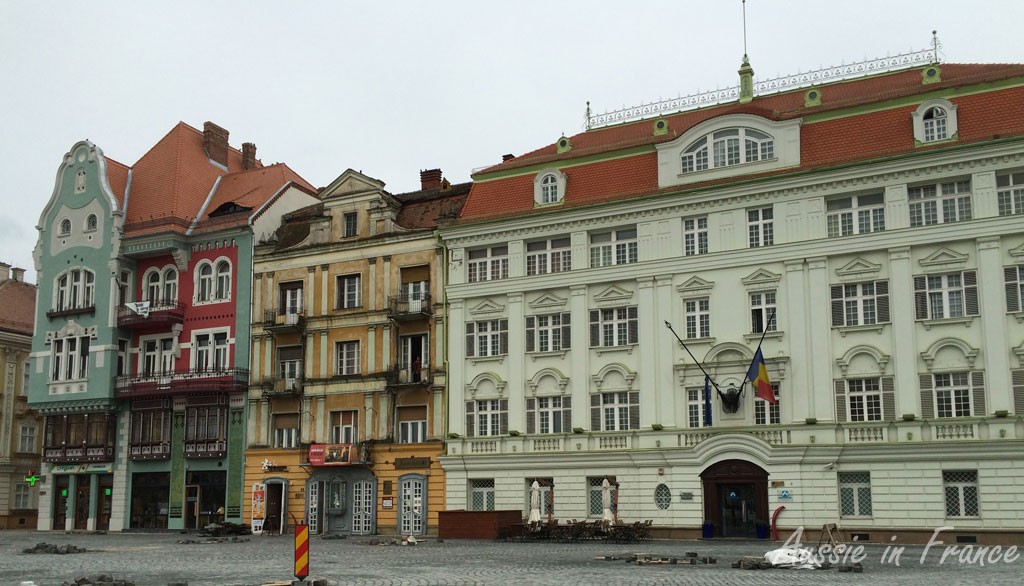 Piata Unirii is the heart of the old town with more lovely buildings under reconstruction. After a glass of wine and Black Forest cake (Jean Michel found a cake menu but only one type was available) we go down to the edge of the canal to look for a restaurant. 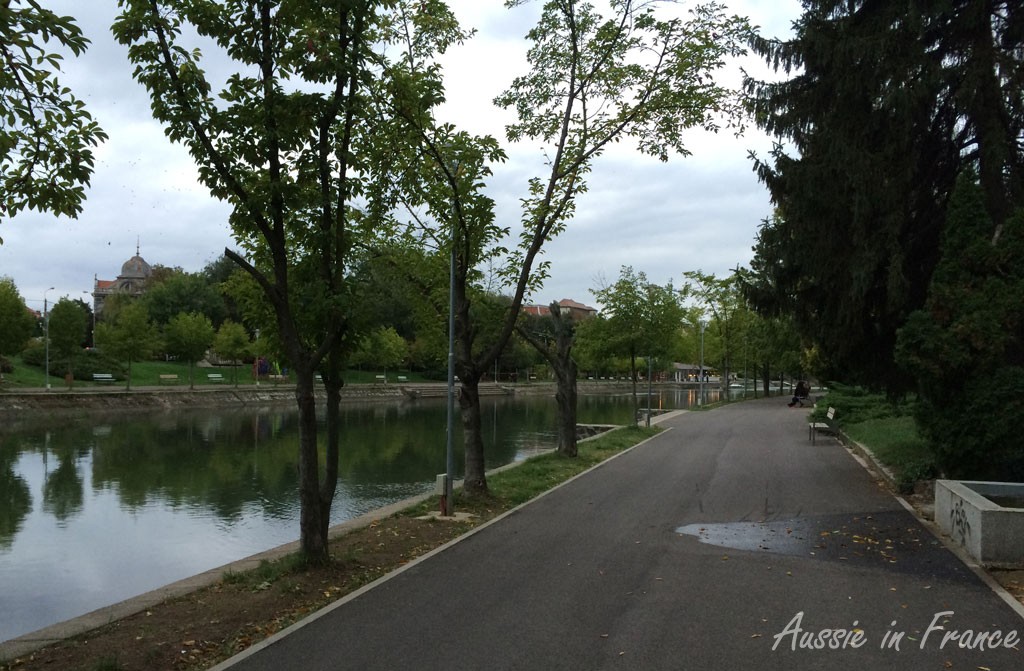 The path along the canal

We regret that it’s not warm enough to cycle. Timisoara has a very impressive network of cycle paths. There are also many green spaces and parks which we discover the next day. 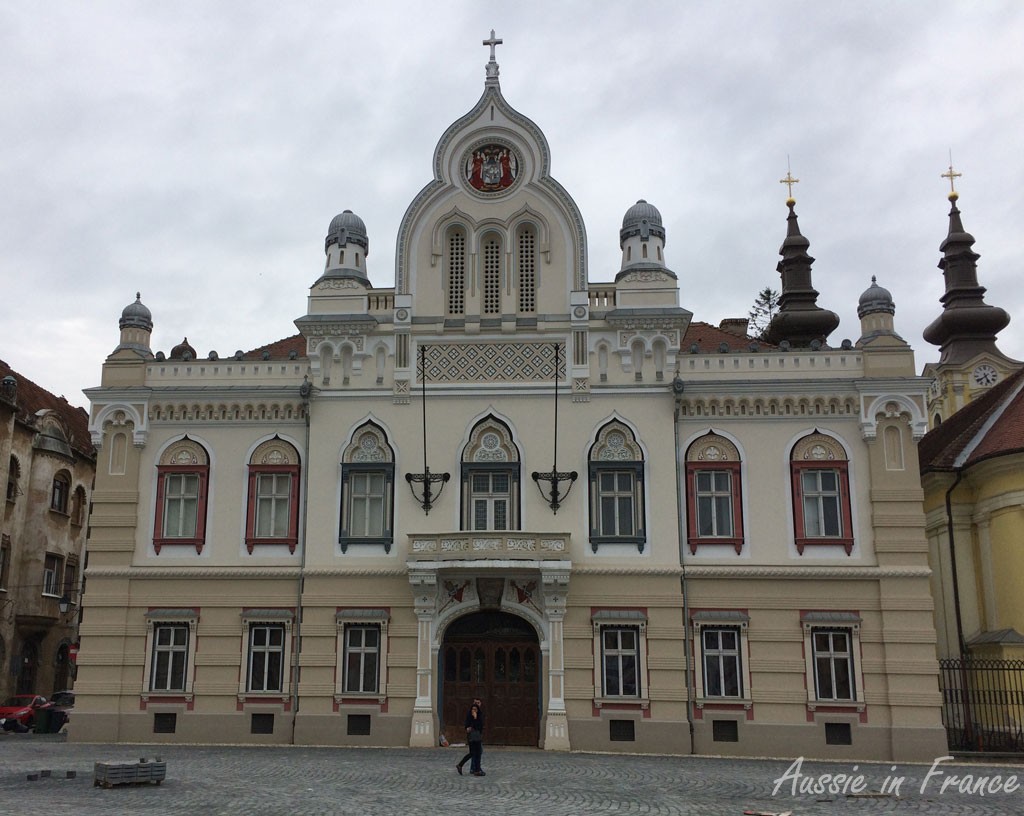 The other side of Piata Unirii

We have a mixed grill and vegetables with a glass of house red at the Rivière restaurant  for 100 lei (about 23 euro). The chips are luke warm and the meat – chicken, chicken and pork – is a bit tough. Although a lot of words in Romanian are recognisable because it is a Romance language (it originated from Latin, along with French, Italian, Spanish and Portuguese), we couldn’t recognise much on the menu and my phone app dictionary didn’t contain most of them, as usual. Next time we might have better luck. 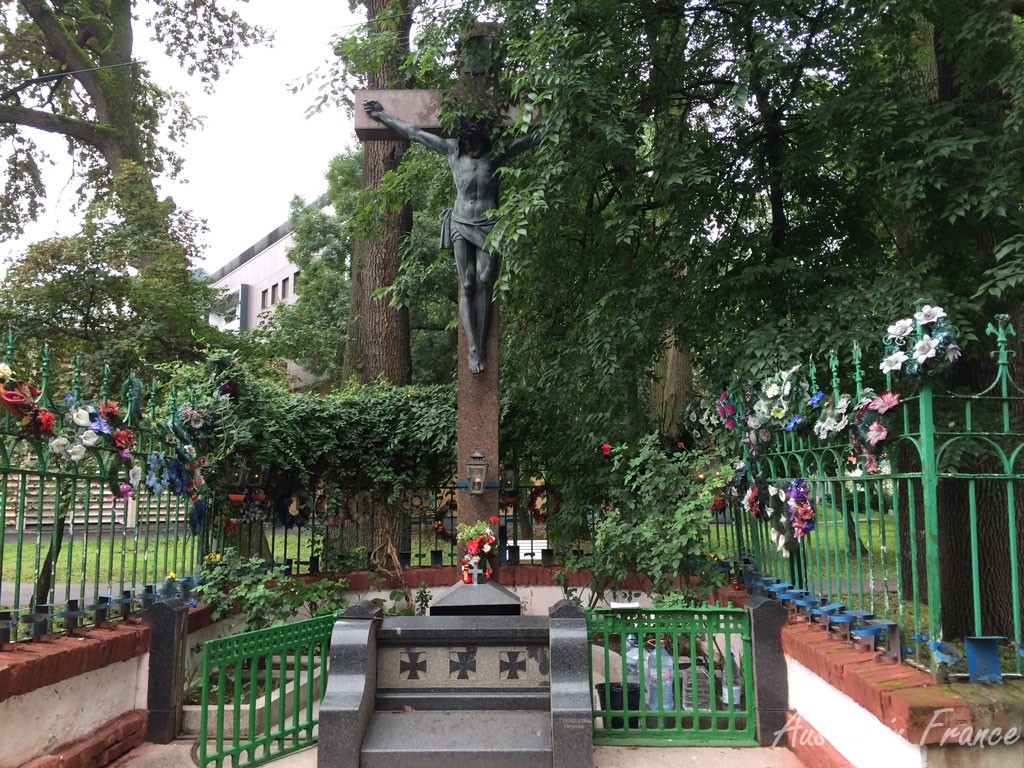 After a good night’s sleep, we set off for coffee (it’s an intermittent fast day) and walk for some time through numerous university buildings, finally ending up in a café which is obviously the local haunt for well-heeled students.

We’re heading for the Trajan quarter but none of the streets seems to be on the map. Jean Michel asks an elderly man standing on the pavement  for help. We’re surprised when he is able to converse in French. He points us in the right direction and we eventually find our way. It is very sad to see what must once have been beautiful buildings in a sad state of decay but maybe once day, the city will be able to finance their renovation. 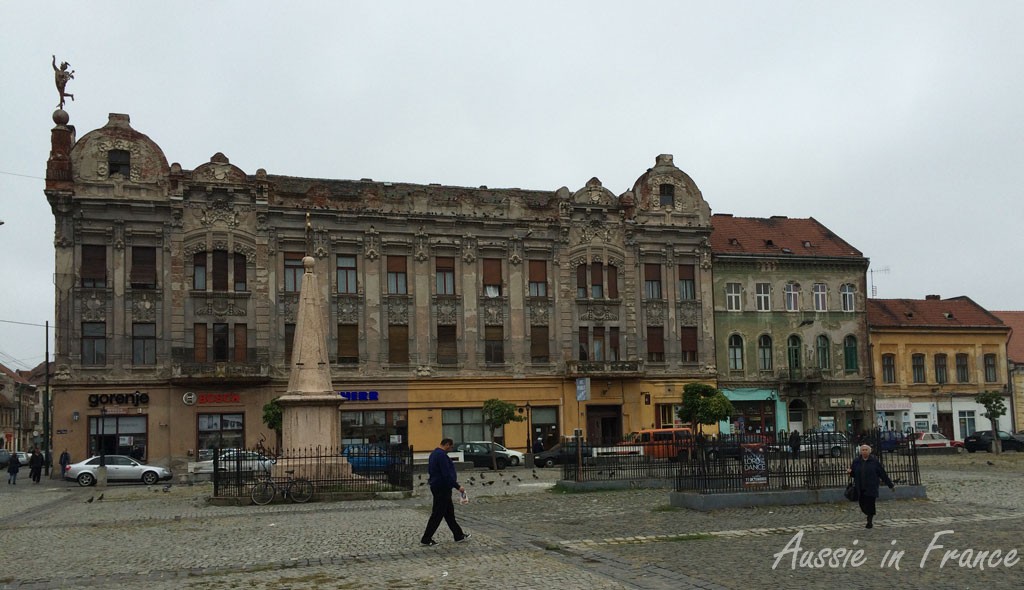 An unrenovated building near Trajan Square

We manage to buy tomatoes , yoghurt and grapes from a little “mixt market” and ham from a stall on the square. 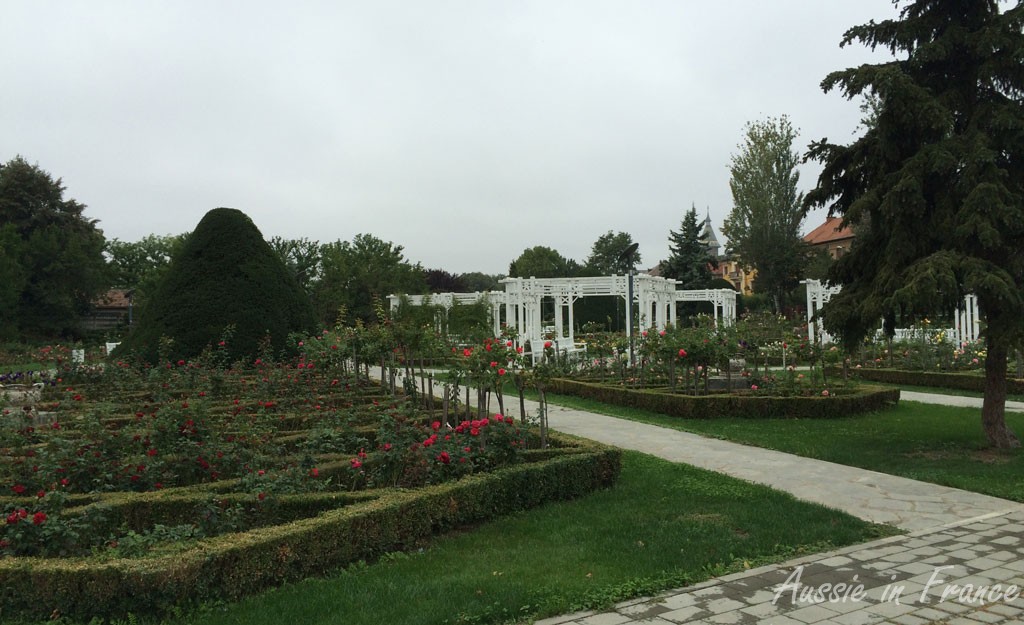 A rose garden along the canal

As we walk back along the canal, we come to a large outside entertainment area, a rose garden and a small botanic garden. There are also lots of areas set up for children. 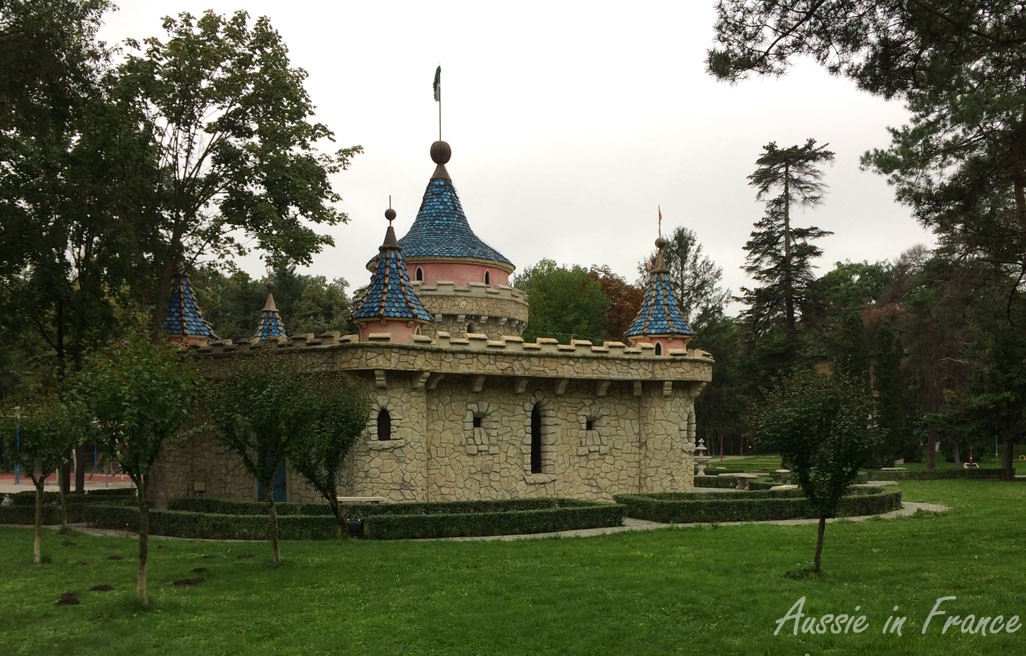 A castle for children to play in

After a well-deserved nap, we set off again, this time to the tourist office for a brochure to illustrate the travel diary and to find a barber for Jean Michel. The tourist office is easy but the barber is a different story. There are pharmacies everywhere but no hairdressers’. We didn’t see any this morning either despite our very long walk.

We leave the old town to try the area on the other side of the hotel. It’s raining. All we see are a large number of second hand clothes shops, mini-markets and cafés. Not a single hairdresser. 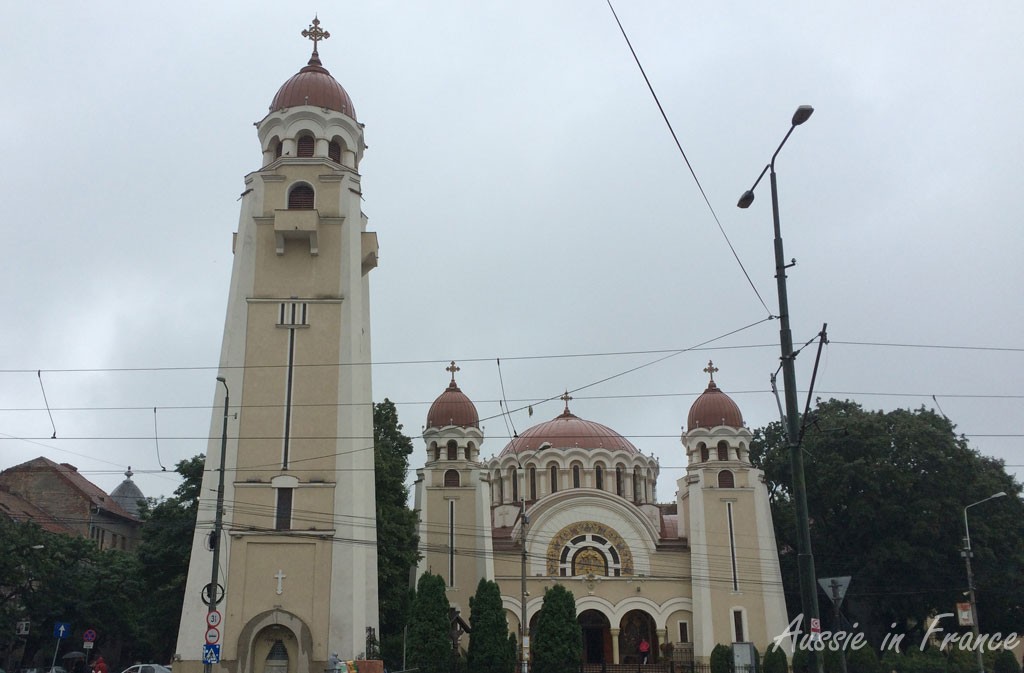 The church opposite the café that we can’t identify

We stop for tea at a café opposite another impressive-looking church, but there is only green tea and herbal tea so we settle for a Coca Zero. I ask the waitress about a hairdresser for Jean Michel. She tells us there is one three streets away with a sign outside and another in the street next to the café, but she doesn’t know exactly where it is, which seems a little strange. I elect to go to the other one. “I’m not sure of the programme”, she adds, “but it should be open”. It’s 5.30 pm and I’ve noticed that opening hours here are often 8 to 3 pm. 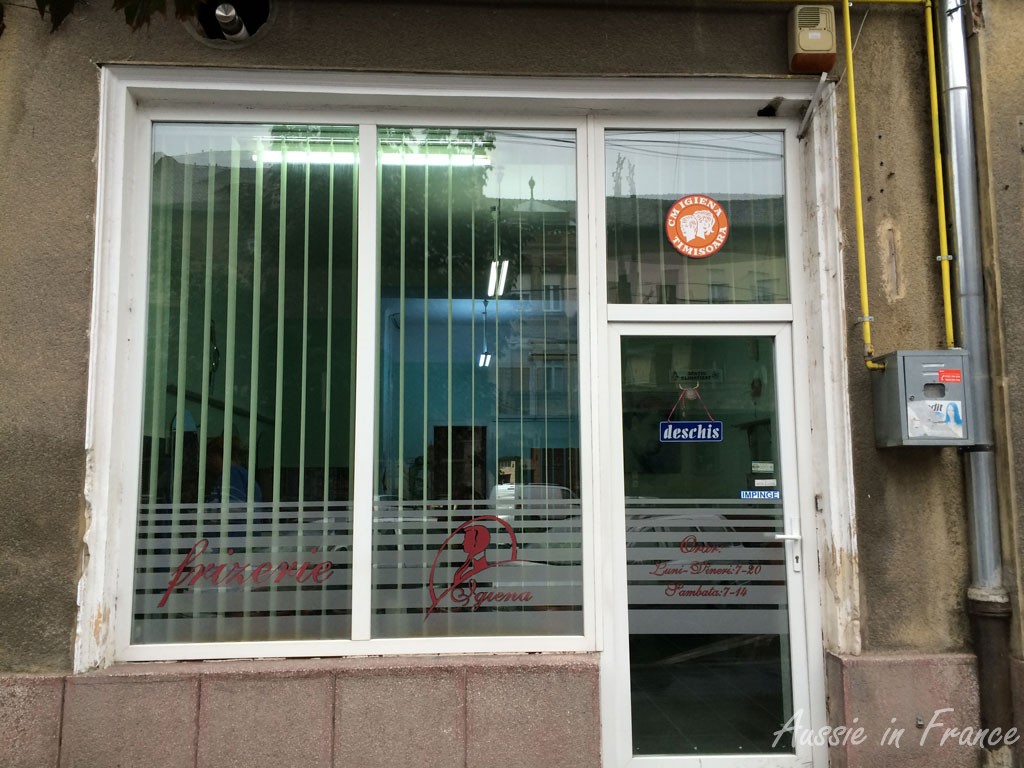 The very non-descript hairdressers from the outside

The only indication of the presence of a hairdresser is the word frizzerie on the bottom left-hand side of the window. We walk in and see two hairdressers, one of whom is sitting dispondently next to her barber’s chair. Jean Michel asks if she can cut his hair. “Yes”, she says, and sits him down. 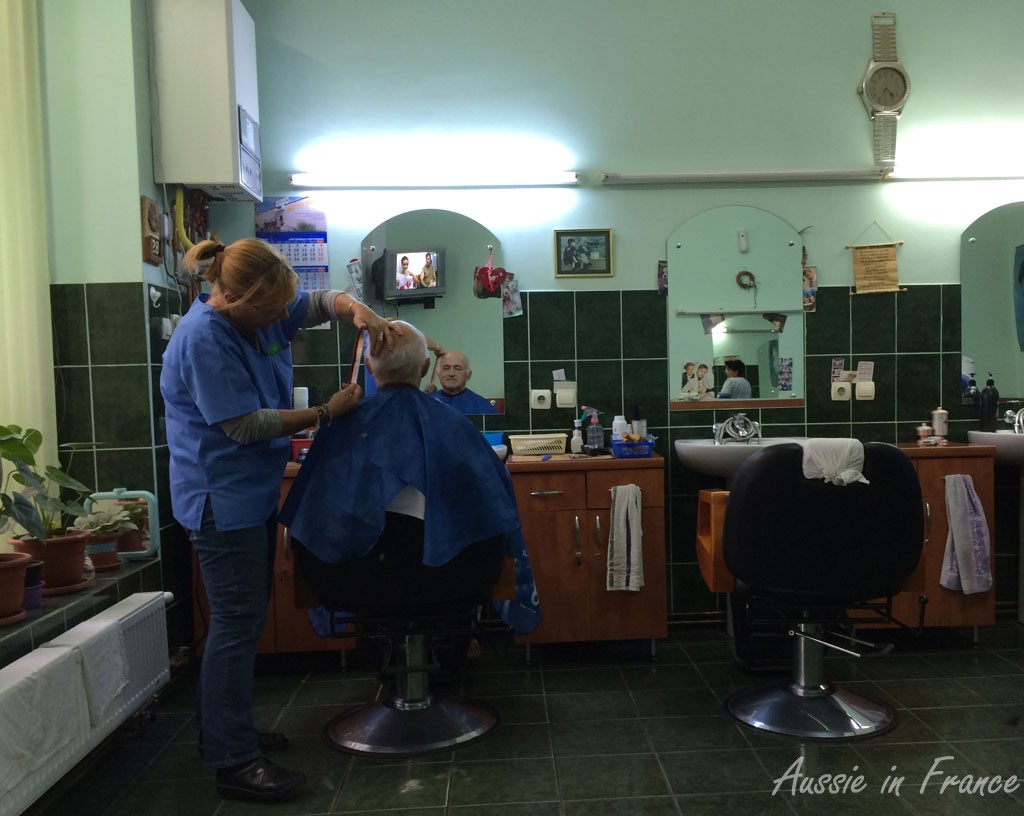 She doesn’t smile once the whole time but gives him a very professional-looking cut. She is a whizz with the razor. It is only when Jean Michel hands over the 20 lei (4.50 euro) that she finally smiles. “Thank you. Have a good day”, she says as we leave.

Our next task is to find an immersion heater to boil eggs and water in our hotel rooms which very rarely have an electric jug. I have seen a store that sells electric goods. We go in and I describe with ample gestures what I am looking for. “Yes”, says the lady, and goes to get one. She then hears me speak to Jean Michel in French and says “bonjour.” She tells us she learnt French at school. She speaks well enough for us to make our purchase – we even buy two. 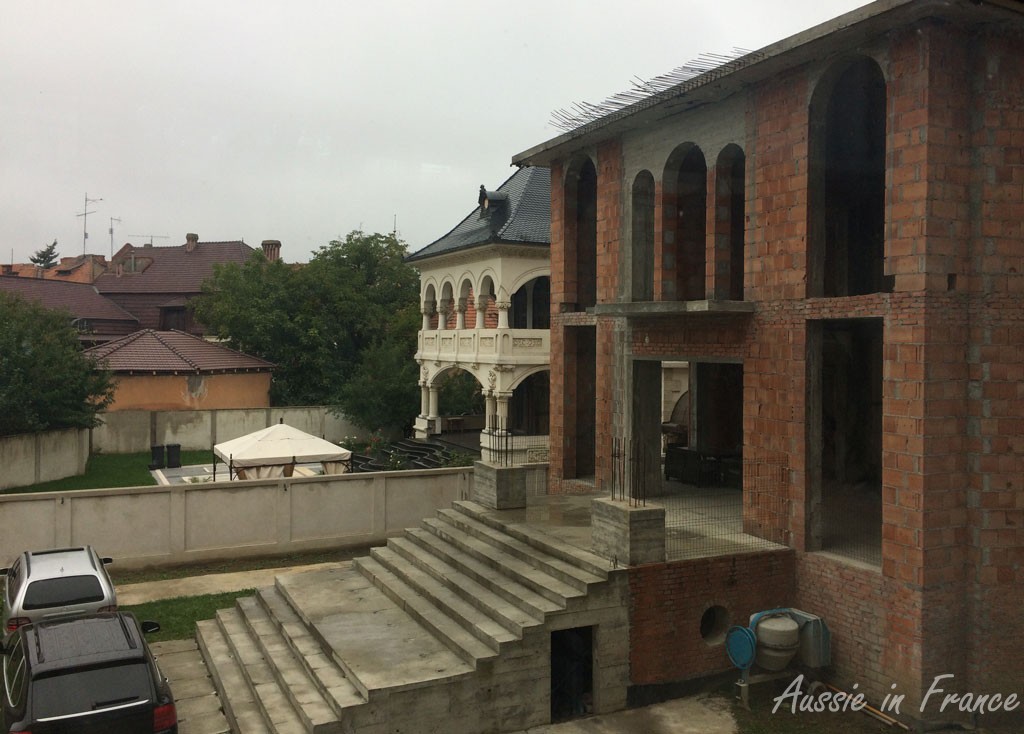 There is work going on next door to our hotel. The house on the right is obviously being renovated to rival the one on the left

Back in our hotel room, we’re feeling rested after our easy day and start checking the weather forecast again for the next part of our trip. We finally decide to go to Baja, on the Danube in Hungary, about 190 K south of Budapest and 250 K from Timisoara. It’s going to be sunny with temperatures rising from a maximum of 15 to 19°C during the three days we intend to stay there. We’ll be able to cycle again! 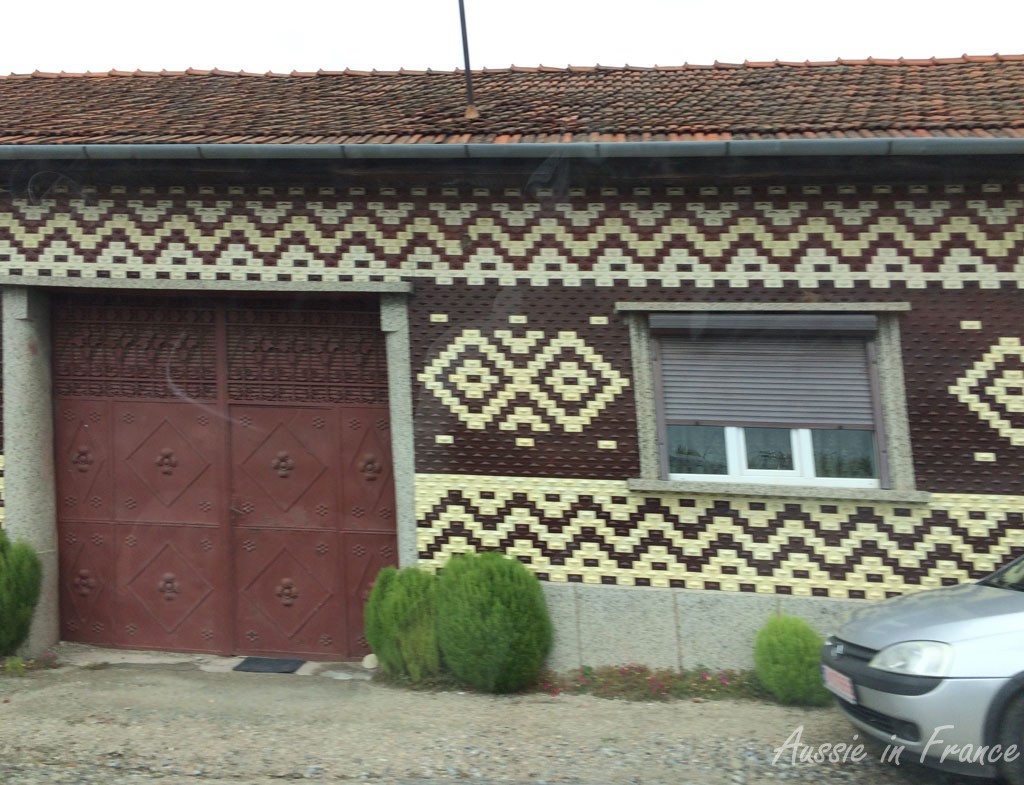 A decorated house in Banat

We haven’t spent much time in Romania, and only in one small area, but we know we will come back though not with our bikes. We’ll come by plane and hire a car so we can visit  the northern part of the country, particularly Transylvania.

3 Responses to Timisoara in Romania – A great R&R stop