We’re in Amboise in front of the Church of Saint Denis, waiting for our friends Susan and Simon from Days on the Claise. We’re here for a purpose. Susan wants to see some artworks in the church that she has heard about. It’s extremely cold so we go inside and wander around. It’s quite dark and gloomy and I don’t notice anything very interesting. 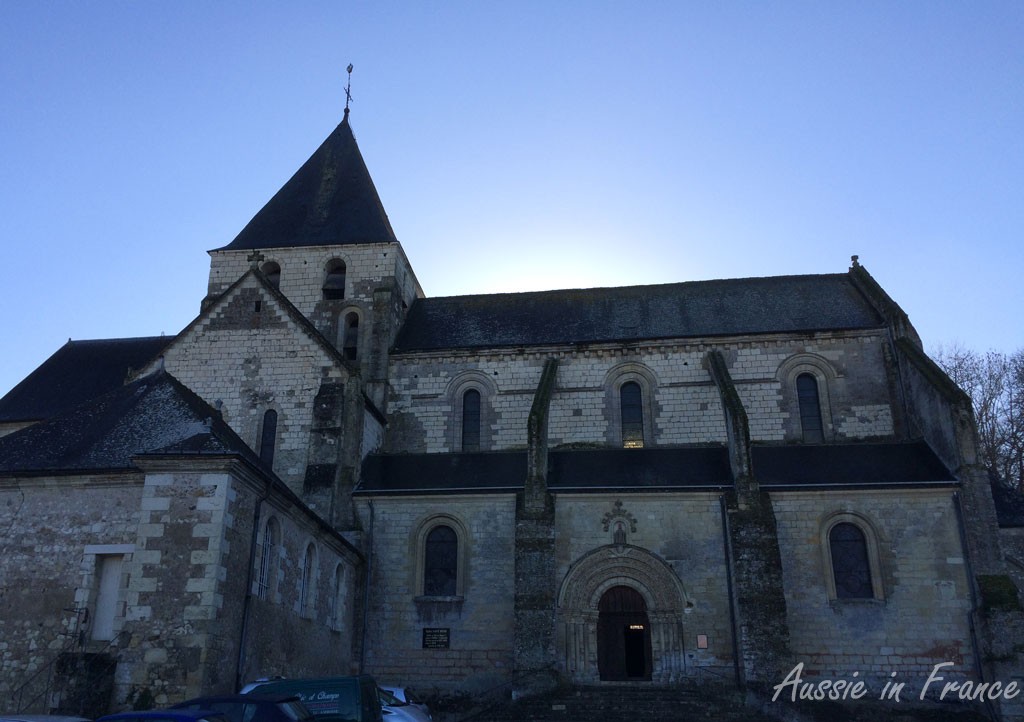 Susan and Simon arrive with Antoinette from Chez Charnizay who is also interested in art. Our mutual friends Janet and Antoine who live in Amboise also join up with us. Susan takes us over the other side of the church in front of a group of statues called a Mise au tombeau which means emtombment and refers to the emtombment of Christ. I wonder why I didn’t notice it the first time. 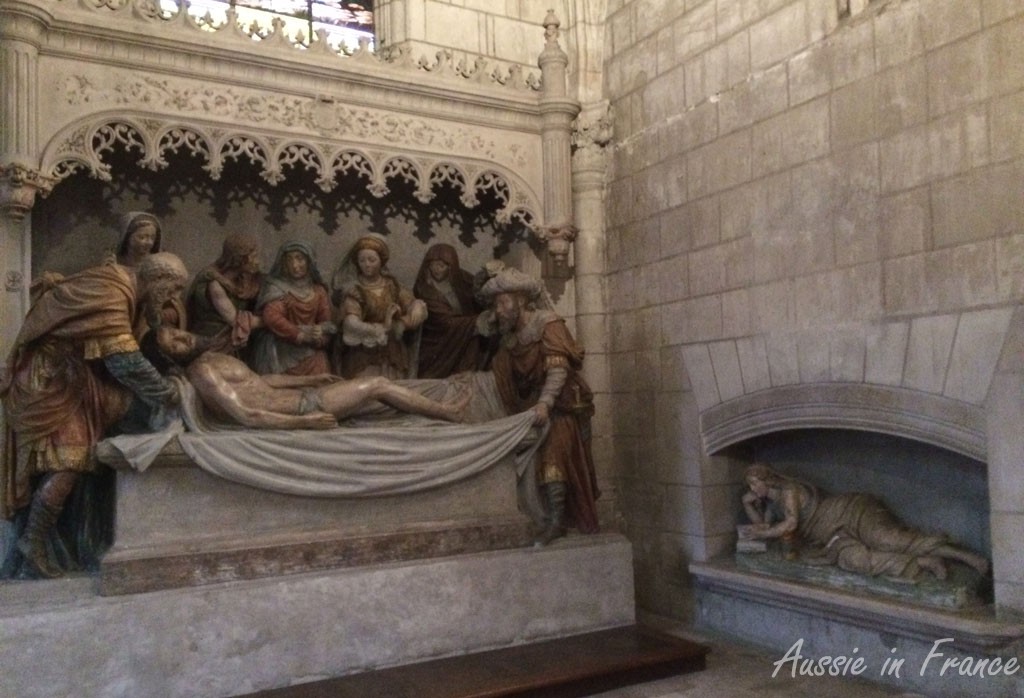 Susan and Antoinette start discussing the different people in the group. It was common practice for patrons of the art at the time – we’re talking about the 16th century here – to be depicted as historical and religious figures.   A man called Philibert Babou, Treasurer to François I, commissioned the group of eight life-sized figures in painted limestone. It is believed that the figures are members of the Babou family. 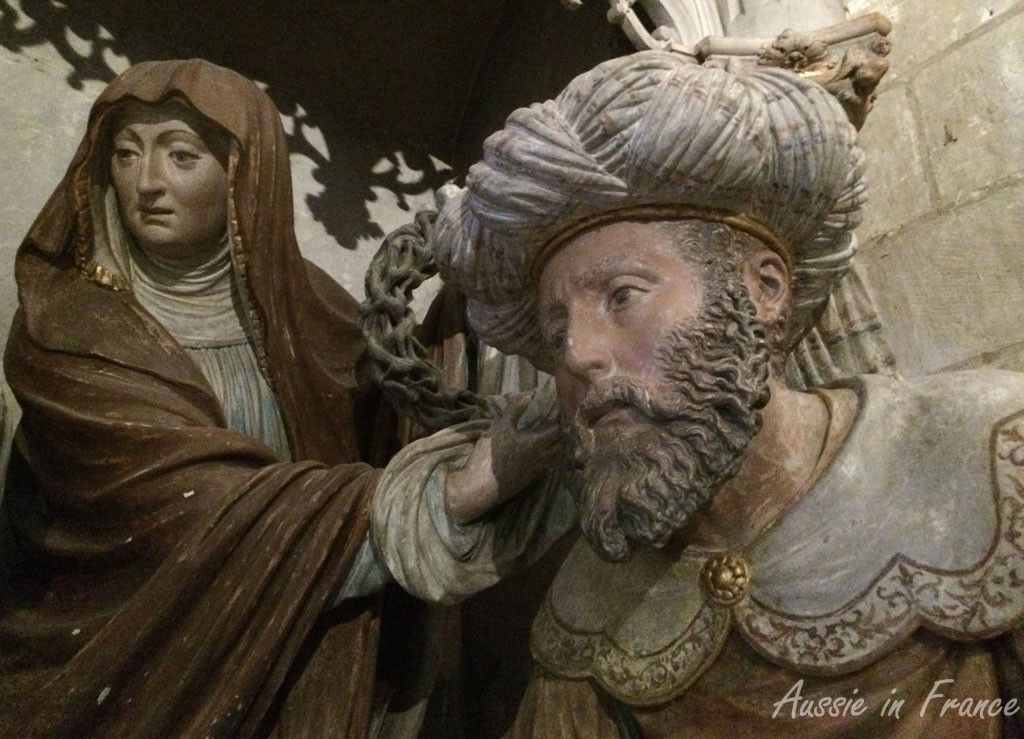 Mary of Clopas and Nicodemus

For people who know their religious history, the identity of the original characters should not pose a problem : Joseph of Arimathea, St Veronica, St John the Evangelist, the Virgin Mary, St Mary Magdelene, Mary of Clopas and Nicodemus. However, Susan is very curious about the fact that Mary Magdelene seems to be wearing a crown. Surely the Virgin Mary should be wearing it? Mary is thought to be Marie Gaudin, Philibert’s wife, who would have been about 50 at the time and was considered in her youth to be one of the most beautiful women  of her time. She even had an affair with François I some 30 years earlier. 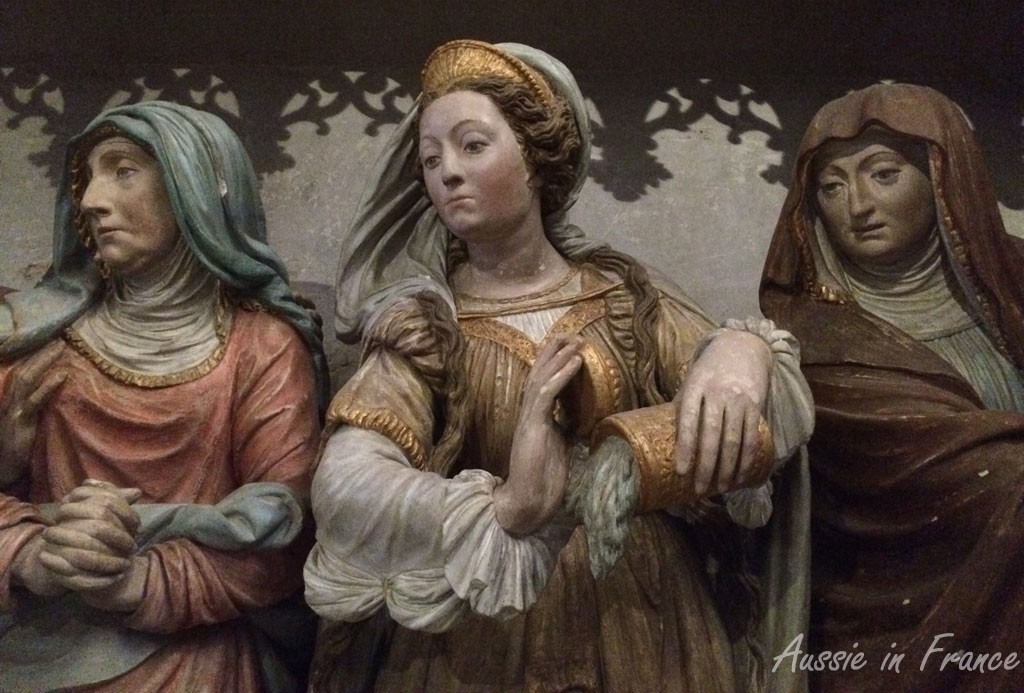 The Virgin Mary and Mary Magdelene

Antoinette also points out the clothes they are wearing, such as the ornate turban and flowing garments with their liberal gold trimming. Large amounts of fabric indicate greater wealth. The oriental look is typical of the sixteenth century.  The headgear in general is very indicative of status. Mary Magdelene, who has the finest features and most intricate garments of the people depicted, is in fact wearing a gilded headdress and not a crown. Susan finally comes to the conclusion that “the message might be that anyone can come to God and it need not interfere with you looking gorgeous or showing off your assets”. 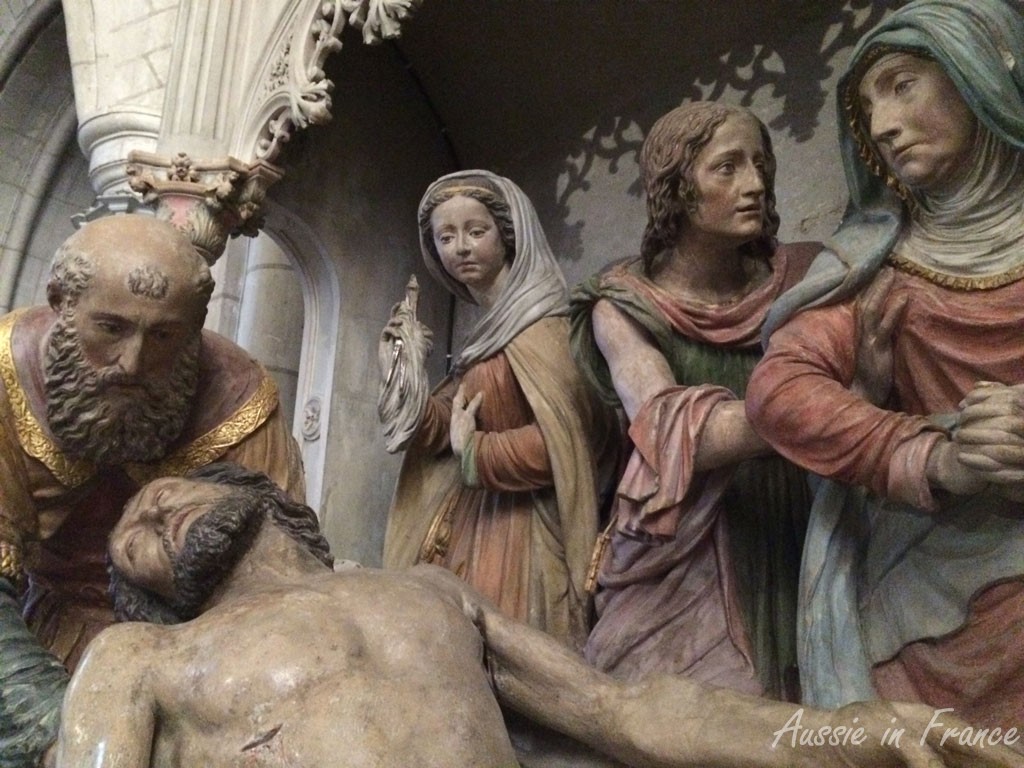 Joseph of Arimathea, St Veronica, St John the Evangelist and the Virgin Mary

I’m really enjoying myself. Having specialists to point out all these different aspects is far better than a guide book which I soon get bored with ! The two written guides we find in church are not very useful and don’t answer any of our questions. I’m also amazed that they were able to move it to Saint Denis intact from Montlouis further along the river. 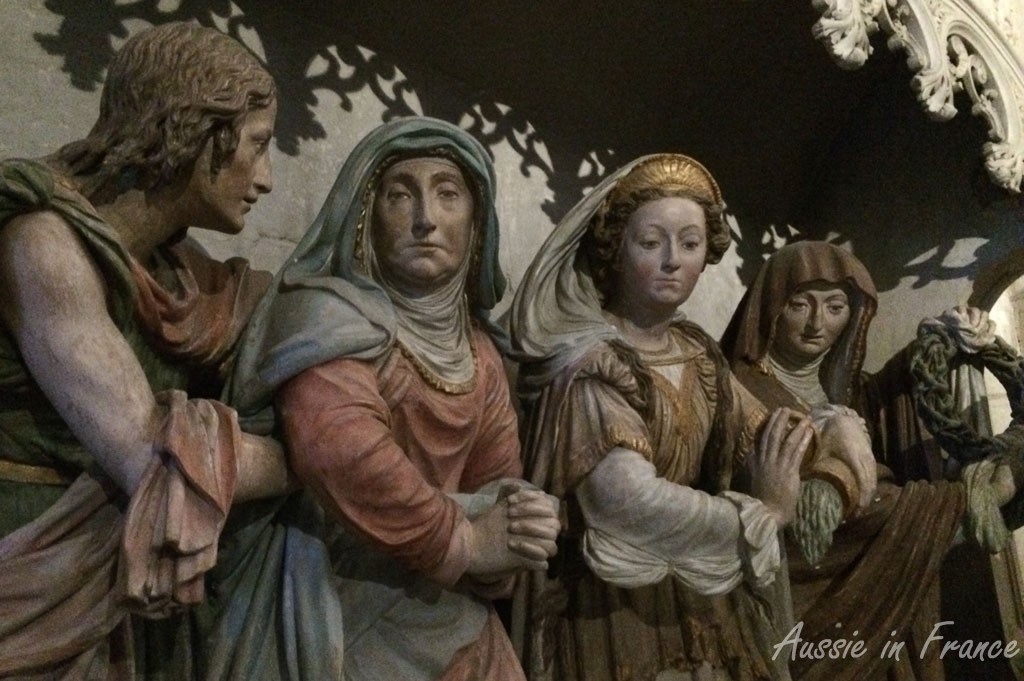 We take a closer look at the reclining figure on the right. It’s Mary Magdalen with a book in her hand and a box of perfume. The sculpture was originally in a chapel in Amboise that has now disappeared. I’m surprised to see MM with a book but Susan tells me this is a typical way of depicting women in the 16th century. 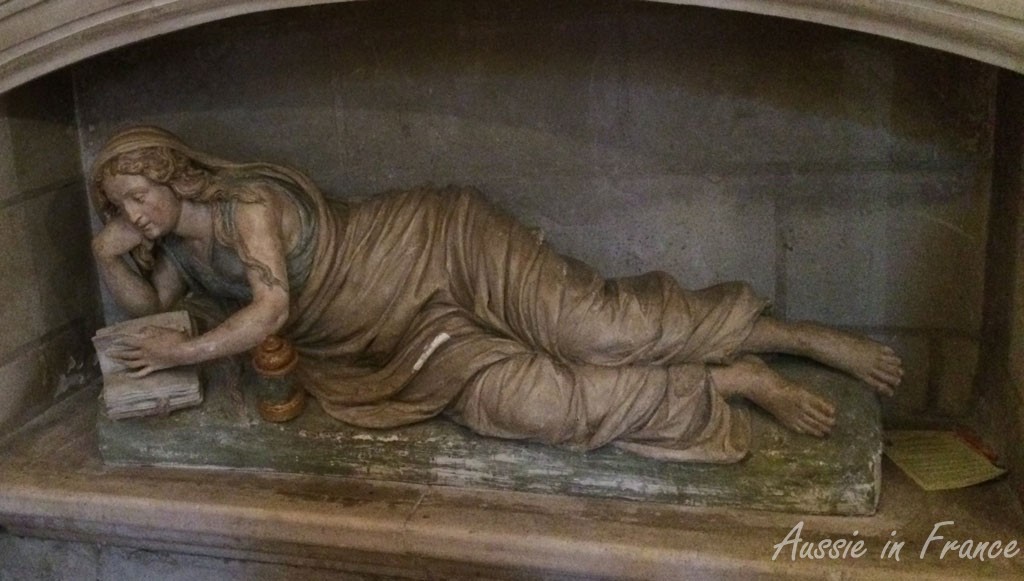 We then move onto the sculpture, known as la femme noyée or drowned woman. We all stand around while Susan explains that it is comes from Bon-Désir Chapel in Montlouis and thought to represent a member of the Babou family, perhaps Marie Gaudin who drowned in the Loire. She then says, “but I don’t agree with that”. It’s true that after we take a look at the smooth muscular thighs it’s seems unlikely that the effigy is that of a drowned woman. Susan adds that she thinks it is exactly contemporary with a similar effigy of Catherine de Medici in the Royal Mausoleum in the Basilica of Saint Denis, Paris. “Catherine rejected the first version of hers because it was too emaciated and gruesome, and I suspect a similar sentiment with this one in Amboise.”

What really surprises me is there should still be so much mystery surrounding two artistic works of such calibre. Susan tells me it’s actually quite common and that, if nothing is known about a work of art, it is just ignored in the local guide books! I go back to the Mise au Tombeau and look at more of the details which are quite amazing. Just the draperies could hold my interest for hours. 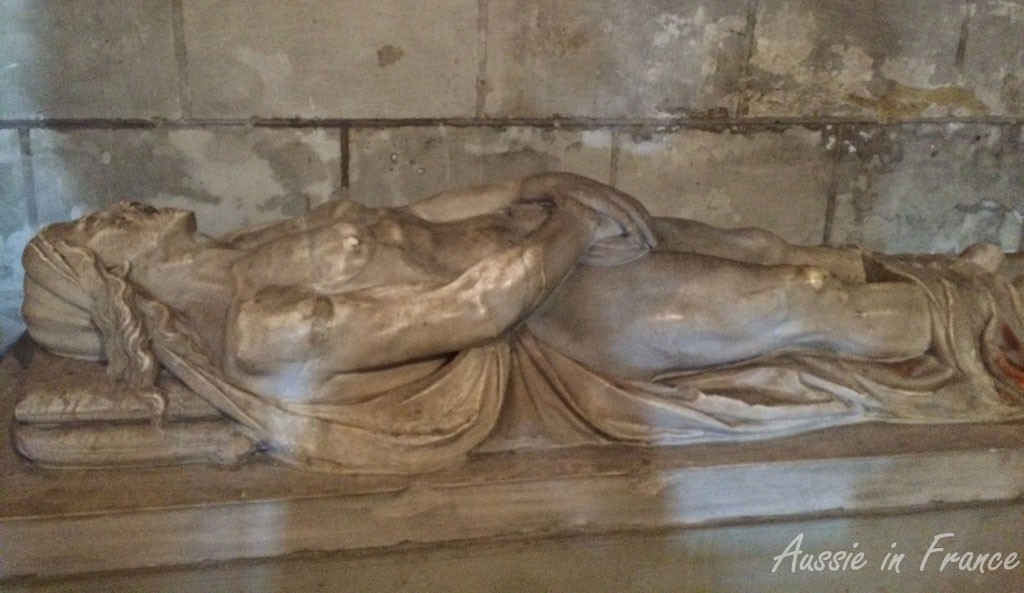 Susan then calls smy attention to another work of art which is part of the altar piece – what can only be a representation of god which, as Susan points out, is most unusual. Only Christ and the Holy Spirit are usually depicted. She later discovers that it is, in fact, the Eternal Father, which corresponds to the first person of the Holy Trinity. 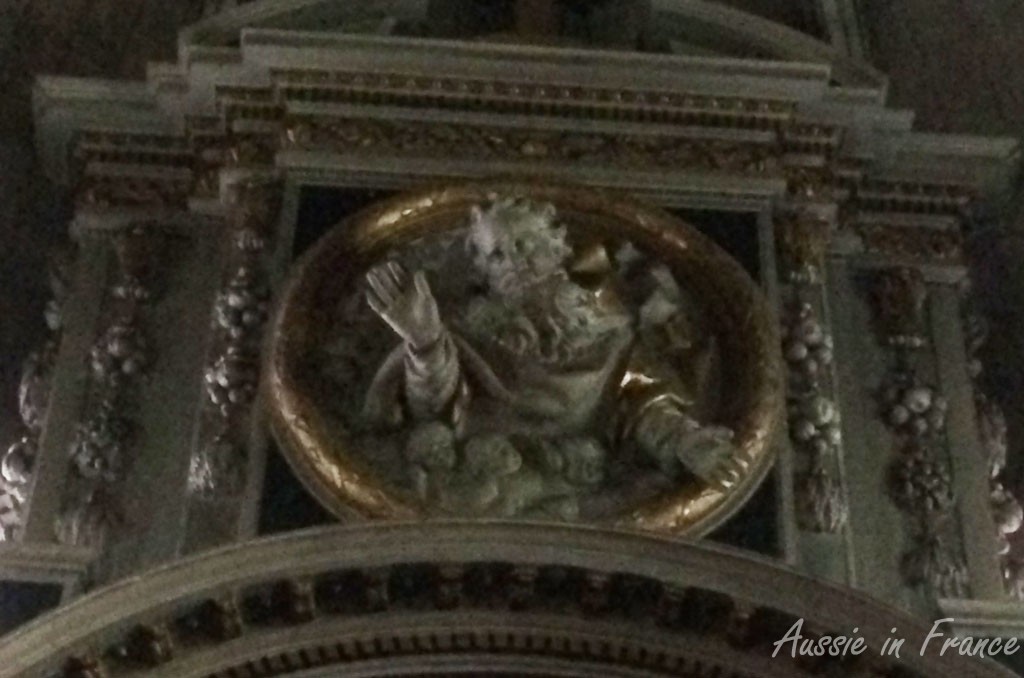 The eternal father on the altar piece

We end our wonderful afternoon a few kilometers outside Amboise at the Gaulish Oppidum where there is a mud rampart that dates from 400 to 50 BC and a mound called Caesar’s Hill overlooking the surrounding countryside. My only regret is that Susan and Simon live in the south of the Loire, an 90-minute drive from us! 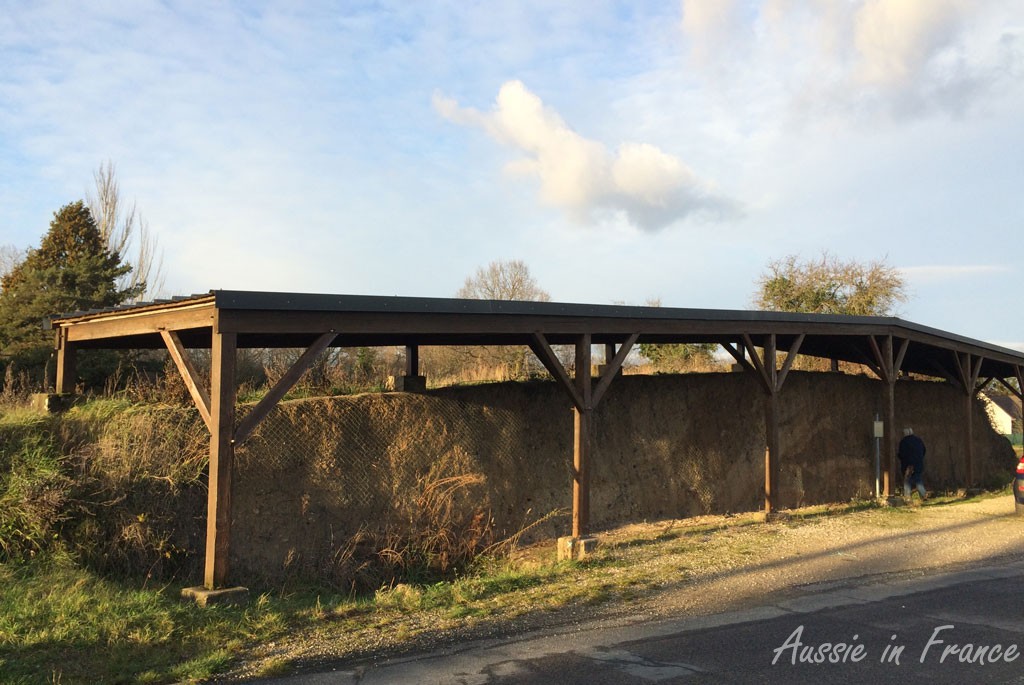 The rampart from Gaulish times built from 400 to 50 BC

For more details about the Mise au Tombeau, I strongly recommend that you pop over to Susan’s blog Days on the Claise. She has written a very lively, yet very scholarly account in her usual inimitable fashion.

17 Responses to A Monumental Afternoon