What I Bought at the Wine Fair in Paris 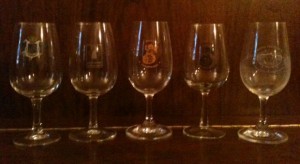 Nearly forgot to go to the Independant Wine Growers Fair at Porte de Versailles this weekend and pick up some more Sancerre for our oysters on Sunday before we ran out which would have been a disaster! Most of the wine in our cellar was originally bought directly from the vineyard when we used to go on one-week wine-tasting holidays around France. We finally filled up the cellar and turned to cycling holidays instead with an occasional tasting of course. Now we just top up at Versailles in November and Mailly-en-Champagne during the Whitsunday weekend. 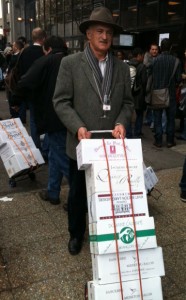 The Porte de Versailles fair is always very crowded so it’s best  to choose a weekday or morning. This time we got there about 11.30 on Sunday. We had sorted out our many free invitations beforehand so were able to make a beeline for the stands on our list. Each invitation entitles you to two standard INAO wine tasting glasses. As you can imagine we’ve collected a fair number over the years – great for parties. The Versailles ones are pretty mundane but those from Mailly-en-Champagne are much more original. Then you use this neat little gadget to hang them around your neck (2 euros for one, 3 euros for two) to keep your hands free. They usually last for a couple of years but they eventually break. 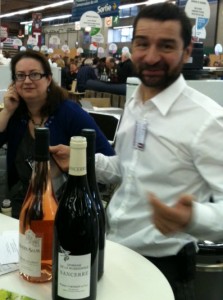 Our first stop was François Cherrier from Domaine de la Rossignol, a family-owned vineyard on the eastern end of the Loire Valley, founded in 1858 and steeped in tradition where they still hand pick their grapes. This year’s sancerre (sauvignon) has a completely different nose from last year’s – a very distinct pineapple. It’s a very « mineral » wine due to the nature of the soil with a powerful bouquet. When we first visited the vineyard about ten years ago, Mr Cherrier shared his passion for wine-growing and showed us samples of the different types of soil and rocks that make all the difference to the way the wine smells and tastes. We have a preference for his AOC sancerre at 8.90 euros a bottle. 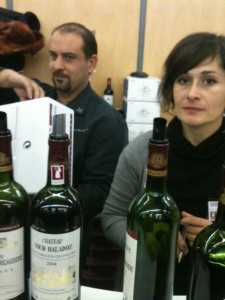 Just next door was our favourite margaux – Château Haut Breton – which we discovered on our very first « wine week » back in 1999 in the Bordeaux area. That day, we tasted « merlot », « cabernet sauvignon »  and « cabernet franc » straight from the vat for the first time. Not very palatable, but a wonderful learning experience. Their 1996 margaux was superb. The last time we bought their wine was in 2005 – we’ve been disappointed ever since. This year, however, we tasted their 2009 and were delighted. It has its wonderful prune nose, full body and good persistence again. I see it won a Silver Medal at the fair this year. Excellent value at 28 euros a bottle. We’ll be able to dip into our 2004 and 2005 stock now knowing  we’ll have something to replace it in a few years’ time. What better accompaniment to a côte de boeuf roasted on an open fire enhanced with a copious serving of freshly-picked wild mushrooms?

Next on the list was Domaine Cauhapé from the south-west of France, in Béarn near the Pyrenees which makes an excellent jurançon. The grapes are mainly gros menseng, petit menseng and camaralet with a bit of lauret and corbu thrown in for good measure. We decided to take a mixed carton of Geyser 2010 with its powerful palate, at 13.50, Sève d’Autonne 2008 with its exuberant nose, at 14.50 and La Canopée, fresh and aromatic, at 22.50. Excellent with fish and seafood and even veal cutlets. I was amused when the wine grower, Mr Ramonteu said, with his strong Béarn accent, « You can drink this wine when you don’t have anything else! » I don’t suppose that’s what he really meant. We initially discovered Domaine Cauhapé at a food and wine tasting in Paris and were able to visit their vineyard when holidaying in the area last spring. 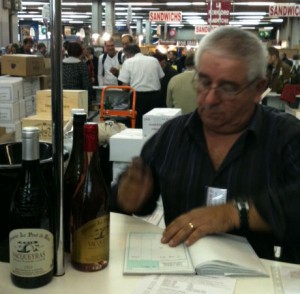 The trolley was starting to fill up by then and even though we’d been spitting out the wine, the alcoholic fumes were starting to take their toll so we bought a foie gras sandwich (what else?) before tasting another red, this time a vacqueyras (grenache, chiraz, cinsault and mourvèdre), oaked for about 12 months, from Domaine Le Pont du Rieu in the Vaucluse in the south-east of France along the Rhone Rivier. An excellent accompaniment to barbecued pork loin chops and spare ribs. We took the 2009 which despite its bargain price (8 euros) is well-structured with concentrated aromas. We’ve just finished off our last bottle of 2003 so it was time to restock. It will be perfect in 3 or 4 years time. 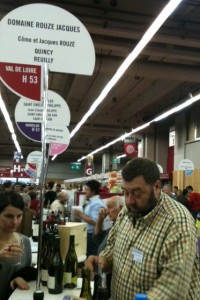 Last stop, Domaine Jacques Rouzé, whose quincy we find very pleasant. This is another sauvignon, from an area close to sancerre, with mainly silica soils. Jacques Rouzé is an advocate of sustainable and integrated vine growing methods and his wine reflects that choice. We took his 2010 Tradition at 7 euros to have with fish or as an aperitif. Watch out for quincy on restaurant menus. It’s not as well-known as sancerre but just as aromatic and definitely worth trying.