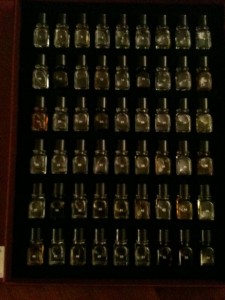 One of my greatest frustrations during our 4-part introduction to wine-tasting many years ago was my inability to identify all the “noses” that the other participants seemed to have constantly … on the tip of their tongues. “Blackberry, most definitely”, they’d say, or “bilberry – reminds me of my grandmother’s tarts”, “morello cherry – just like home-made cherry brandy”, “wild violets – you can smell the undergrowth”, “hawthorn – shades of country lanes”. “Mmmm …”, I’d say, trying desperately to memorise the elusive scent.

Although I’ve now been living in France for over 30 years, my childhood in the Australian tropics did not prepare me in any way for the subtleties of berries and flowers from temperate climes. The next spring, during our long country walks, Relationnel would invite me to smell the blossoms along the way: hawthorn, wild cherry and apple blossoms. I gradually began to enrich my olfactory memory and was delighted when I, too, could identify what the French usually lump together as “fleurs blanches” or “white flowers”. When the summer came, I seized every opportunity to smell all the different berries available on the market. But having to wait until the season came around again made the learning process a little slow. 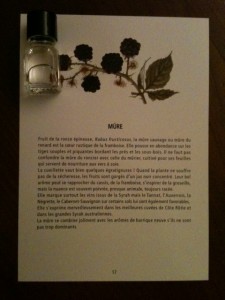 During the wine-tasting classes, our instructors used to pass around tiny numbered phials of “noses”, part of a collection of 54 different concentrated aromas called “Le Nez du Vin” with an explanatory card for each “nose”. Since the full collection was rather expensive, we started with a smaller set of the 12 most common aromas found in bordeaux wines: strawberry, raspberry, black currant, blackberry, cherry, violet, green pepper, truffle, liquorice, vanilla, pepper and smoke (!).

It didn’t take long for us to learn them off by heart and it became our best party trick. One day, we tried them out on my daughter’s friend who was born and bred in the country and I was most reassured to see that she had even more trouble than me putting a name to what she could smell. 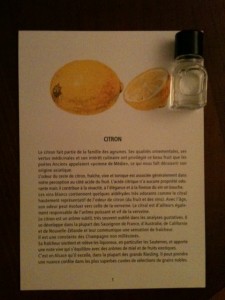 Of course, when we started tasting white wines, I came into my own: citrus fruits, pineapple, banana and lychee were far more familiar to me than wild berries of course. I’ve become quite an expert at picking up the “banana” aroma intentionally cultivated in “beaujolais nouveau”. Contrary to popular belief, most French people probably know less about wine today than Australians do. When beaujolais nouveau hits the cafés and restaurants on the third Thursday of November the question is always “does it smell of banana or strawberry this year?” Since people expect one or the other and love being able to get it right, the winemakers often adapt the wine-making process to produce isomyle acetate which is the molecule that gives a banana its characteristic smell. 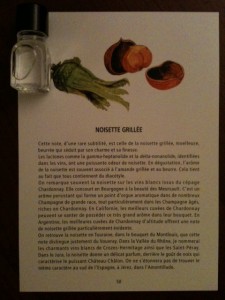 Then one November, at the wine producers’ fair at Porte de Versailles in Paris, we didn’t like any of the wine we tasted so decided to splurge and buy the whole set of “noses”. The box is divided into citrus fruit, exotic fruit, seeded fruit, red berries, black berries, pitted fruit, nuts, floral aromas, vegetables, mushrooms, wood, herbs, spices, animal aromas and roasted aromas. Of course, the concentrated phials are only a reminder of the real thing, and what you can smell in the wine is something else again. Fifty-four aromas, however, are taking much longer to get our noses around!

But I can now identify most of the berries and flowers with a reasonable success rate, often confirmed by the experts at our regular wine tastings. And I can tell you, having the whole set is a much better party trick!