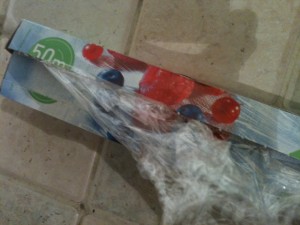 I can remember translating a text about plastics with my students once. That year, they came from Canada, the US, the UK and Ireland. Cling film was mentioned and it sparked off a most vehement hate session about French products and film étirable in particular. First, instead of having a metal serrated edge to tear off the film, the box has inefficient tiny plastic teeth. No comment. Second, the film itself is sticky and flimsy and has to be handled with great care and two hands (once you’ve managed to unstick it after finally managing to tear it off and half break the box). I understood them totally. Relationnel and I went to London one year in the car and I bought back 10 boxes of real cling film from Marks & Sparks. I’ve only just run out of it and now I have to devise all sorts of ways of NOT using the stuff you get here.

I purposely didn’t bring my kids up on Vegemite because it seemed a bit pointless to have to keep relying on gifts from visiting Aussies who already found it difficult to limit their baggage to 20 kilos. You can of course get it at Fauchon’s – you can get anything at Fauchon’s on Place de la Madeleine – but I lived in the suburbs in those days and the sheer thought of trekking into Paris with two kids in tow was often too much for me. The first time Leonardo smelled Vegemite, he ran a mile anyway and I had to be very careful I didn’t eat it near him after that. He has a very keen sense of smell. I still get a kick out of the occasional little jar of Vegemite to put on butter and toast. Haven’t had one for a long time though.

Bacon is something you can’t get here. There’s a thing they call bacon but it’s roundish and thin and doesn’t have the tail bit that you need for a crisp piece of fried bacon to eat with your eggs. My mouth’s watering just thinking of it! They don’t have T-bone either. Well, most places don’t and when they do it’s not real T-bone. When I was a kid and we spent three or four days in a row travelling down the coast from Townsville to Brisbane on holidays (it was only years afterwards that I really understood why Mum and Dad weren’t talking to each other by Rockhampton – there were six of us in the car), we’d have lunch in roadside cafés and there’d be T-bone on the menu. Dad would never let me have it because he reckoned I’d never finish it. I finally persuaded him and ATE THE LOT. After that, he couldn’t say no. I’ve loved it ever since. They have côte de boeuf here instead which really isn’t bad. It’s just missing the smaller side of the T and is thicker. Also, it’s really for two people. Even I can’t eat a whole one. 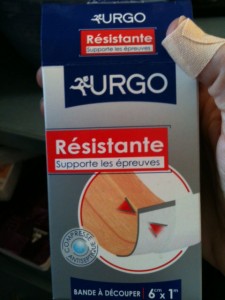 The last time we were going back to Australia, I asked Townsvillean if he wanted anything from France. And do you know what he said? Pansements. Band-aids, you want band-aids? He particularly wanted URGO. Apparently Australian band-aids are inferior and don’t stick properly whereas the ones here do.  See, just like the cling film! I guess that’s a French quality. They know how to make things stick.

So, tell me, what are your bugbears and favourites from other places?