Halloween and Pumpkins in France

Posted on November 1, 2011 by Rosemary Kneipp

I can remember being in Troyes one year at Halloween and was surprised to find a restaurant decked out in black and orange because although Leonardo was born on 31st October, I had never seen any sign of Halloween in France. Then I heard the explanation on France Info. I love that radio because it keeps repeating the same news all day. If you get distracted by something else (and I always do), you know you’ll hear it again a little while later. It has lots of lifestyle and other interesting tidbits as well. I get a lot of my scattered knowledge from there. Far better than watching the 8 o’clock news with one of those annoying news readers who wear tons of make-up and carry on like film stars. Also, you don’t get the horrific pictures that you do on TV. I have still not seen any videos of 7/11. I’d be having nightmares if I did.

So, back to Halloween. In 1992, a costume company called Cézar bought out an American firm and found itself with a huge number of Halloween costumes. It opened a mask museum in Saint-Hilaire-Saint-Florent near Saumur in the Loire and did an amazing publicity campaign and that was the beginning of Halloween in France. It boomed in the late nineties before gradually fizzing out, probably because it lacks tradition here. 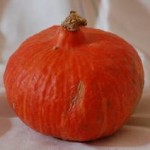 On Sunday, I heard an English woman at the market asking if there were any appropriately sized pumpkins but no one seemed to know what she was talking about. Speaking of pumpkins, they are excessively disappointing in this country. Usually big and tasteless. I bought a butternut in Romorantin last week – didn’t think you could go wrong with a butternut – but it was just like a bland squash. They only make soup with pumpkins here, but I’m not into soup. Some places have started selling what they call “potimarron”. I looked it up in the dictionary and it says « red hubbard squash, red kuri squash », not that I’ve ever heard of it. It’s not bad, but nothing like the Queensland blue. I still have a scar on one of my fingers from cutting up a pumpkin. 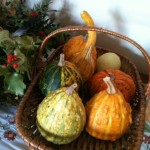 They do sell these neat little inedible squashes though. I found some in the Loire at 0.30 euros a piece. A real bargain. They’ll probably last a couple of months and are great decoration next to my forest floor with its autumn leaves, holly, pine cones and acorns. I even brought some moss home.

One of the first things I’m going to do in my new vegetable garden is plant some Australian pumpkins. That and raspberries.

This entry was posted in Food, French customs. Bookmark the permalink.

8 Responses to Halloween and Pumpkins in France