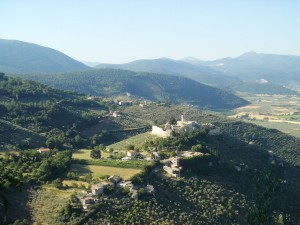 Just like everyone else, we fell in love with Tuscany the first time we went there together in 2003. I’d been to Florence before, staying with friends in Umbria so was already smitten. My memories of chianti, however, were associated with wine and cheese parties when I doing French at uni in Townsville. The bottles were always covered in raffia and were much cheaper than French wine and a little more “authentic” (well, at least they were European) than kegs of Australian moselle. Not that I’ve ever been to a wine and cheese party in France. I wonder if it’s an Australian invention or a more general Anglosaxon transposition of French culture.

The hillside house we were renting in Tuscany had a welcome bottle of montepulciano so we tracked down the Fattoria di Palazzo Vecchio where it was made and I managed in halting Italian to ask for a tasting and then buy 6 bottles of their excellent 1998 “Riserva”. Unfortunately we were unable to find it last time we were in Tuscany because we couldn’t remember the name, but next time we’ll do better! 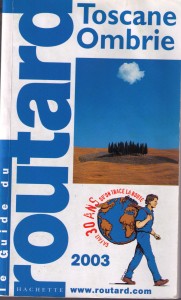 The chianti is another story altogether. We’ve now been back twice. We found the address in our “Routard” guidebook,  the most popular of all French guide books alongside the Michelin. “Routard” means “backpacker” and that’s who it was geared for back in the flower power days. As the original team all got older and richer, the backpacks all but disappeared. The guides for some countries have still kept their original flavour but for Italy, for example, there are several categories:  très bon marché (very cheap), bon marché (cheap),   prix moyens (middle-of-the-road prices), un peu plus chic (a bit more chic), plus chic (more chic) and very occasionally, carrément chic (definitely chic). 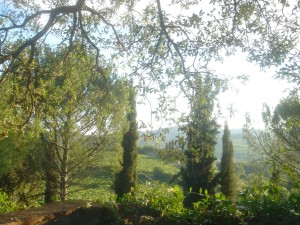 We consulted the section on where to buy good wine and olive oil and read the blurb about the Azienda Agricola San Donatino: “From Castellina, take the road to Poggibonsi. After a little more than a kilometer, a little sign on the left indicates a dirt road down a hillside to the hamlet of San Donatino (cul-de-sac). This is where Léo Ferré lived from 1971 to 1993, in the company of his wife Maria Cristina and their three children. In his home overlooking vineyards and olive groves, the great “poet” of French songwriting continued his prodigious activity as an artist and composer. Léo often used to walk up to the isolated hill of Poggio ai Mori (the hill of love) where the land gives of its best. Whence the name of the family vintage Chianti Classico Poggio ai Mori, a sunny vivacious wine (under the sign of Picasso’s owl) that you can both taste and buy (in bottles or bulk) for a very reasonable price. The extra virgin olive oil has a fine aroma.” Would you have resisted? 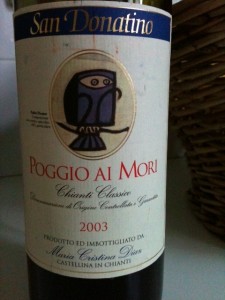 The dirt road down the hillside was somewhat of a challenge and we wondered if we’d ever get the car back up again but we decided to take the chance. We rang the bell next to an anonymous-looking wooden door in a wall and a woman came and opened it. I brought out my basic Italian again and she took us inside. The view from the terrace next to the beautiful old stone house was absolutely breathtaking! We sat down and she asked in perfect French “Would you like to start with the oil or the wine ?” Well, we got on famously after that. It turned out that she was Cristina’s sister. The girls had been brought up by their immigrant parents in France but returned to the family property after Cristina met and married Leo (well, I think that’s the story anyway).

The wine was delicious, particularly their Riserva. The classico is 100% sangiovese while the Riserva, aged in oak barrels for 24 months, contains 10% cabernet sauvignon. It was also the first time we’d had an olive oil tasting. We came away with a very large stock of both plus a complimentary bottle of their sweet Diacro (45 % Trebbiano – 45 % Malvasia – 10 % Pinot Gris).

Our subsequent visits have never had the surprise and delight of the first one but the welcome is always just as friendly. It’s also a B&B though we haven’t tried it out. We already have a favourite just outside Greve in Chianti: Agriturismo Casa Nova La Ripintura. Make sure you get a room with a terrace. Spectacular views guaranteed.

6 Responses to My Favourite Chianti