Santa Climbing up the Wall 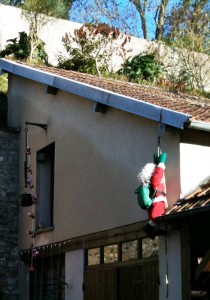 I love the Christmas decorations on individual homes in the French countryside. It’s amazing how many Santa Clauses (père noël) you see climbing up the walls! I don’t know how they explain it to the kids. Apart from the Father Christmas in David Jones, I don’t remember ever seeing any others. We would dutifully leave out our milk and biscuits and I even went to sleep on the floor of my parents’ room once because I’d left something off my wish list but I didn’t get to see him after all. 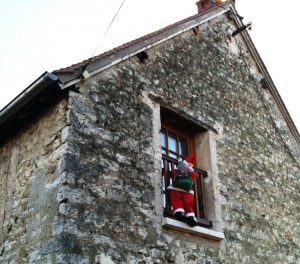 My mother used to play Santa Claus for my youngest brother on Christmas Day. Dad certainly wouldn’t have done anything as undignified! She wore a pair of men’s pyjamas that she’d dyed red and ho! ho! hoed! around. She realised it was time to stop though when my brother whispered to her “Mum, your fly’s undone!” 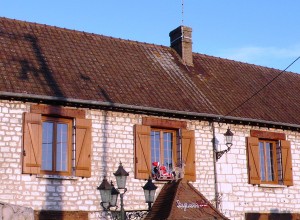 In his sleigh this time

Leonardo came home from school when he was in first grade and said, “You know, the teacher and I are the only ones who believe in Santa Claus. Pity for the others!” He thought it was like god – there were believers and non-believers and obviously the stakes were much higher for Father Christmas.

I didn’t perpetrate the photo with Santa Claus tradition for my children though I do have one taken in Townsville one time we were in Australia for Christmas but I love getting the ones from my brother with his three little boys. 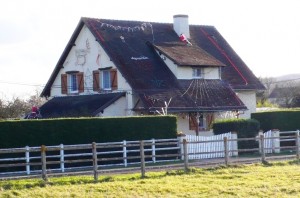 I don’t know how they explain this one – if you look closely, you’ll see two Santa Clauses! Maybe it’s a race.

And I think the next photo is the best of them all. This time, Père Noël is climbing up the town hall in Port Mort (Dead Port!). I’ve been trying to imagine what sort of presents the town councillors are expecting! May a new name for the town. 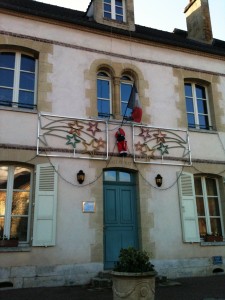 One Response to Santa Climbing up the Wall