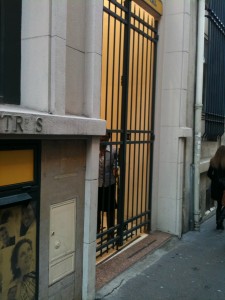 The French post office has changed. You used to spend hours waiting in queues in dismal-looking buildings hoping that the person behind the window in front of you wouldn’t suddenly close it just before you got there. I took to buying aerogrammes (remember them?) so that I wouldn’t have to go to the PO too often. I discovered that one of the reasons for the long queues is that the post office is also a bank, which is particularly popular in rural areas where there is a post office, but not a bank, in every village. Why anyone would have a post office account in Paris is beyond my understanding.

One of the most wonderful things about the arrival of the internet was that it freed me from my bondage to the post office. Before that, I was always having to worry about meeting deadlines for my translations, rushing out in the car to catch the last post at peak hour. There was a special “emergency” room behind the main office where you could make sure that already-stamped letters got there in time or else send them by Chronopost. I had dreams of buying a house next to the post office. 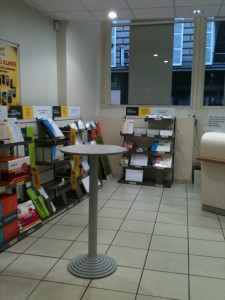 Then a couple of years ago, when the post office was practically bankrupt, they changed the concept. All the buildings were revamped with white walls and floors to offset the yellow and dark blue signature colours. The windows disappeared and were replaced with open desks. Stamping machines and a self-service area were added. It has taken a while for people to get used to the new system but it has gradually become more efficient and the queues have diminished slightly.

Recently, I had to collect a registered letter. I don’t know about Australia, but in France, they send you a registered letter whenever they possibly can. This was to confirm that I had signed the promise of sale for our new home in Blois. Jean Michel had one too but we obviously couldn’t collect each other’s! There was quite a long queue in front of one counter and no one at the other counter which was labelled “registered letters”. I went up and someone came out of nowhere to serve me almost immediately. Suddenly, people started shouting at me from the other queue that I’d jumped my turn! I am usually very respectful of queues but I just acted very French and ignored them. I collected my letter and scuttled out. 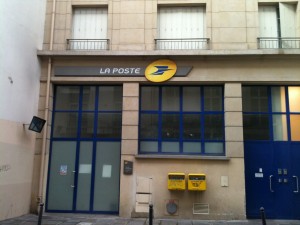 The final sale of the house was brought forward by a couple of months so I had to pick up another registered letter of course. We arrived to find that the PO doesn’t open until 10 am on Saturdays. With ten minutes to spare, we went to the dry cleaner’s across the street. When we got back, there were already several people waiting in front. Once the PO was open, we were served quite quickly but the lady took ages to find the letters.

They may have revamped the inside of the post office but they haven’t changed the staff. I also asked for a prepaid box to send my Christmas presents to Australia only to learn that they’d run out of medium-size boxes. God knows how I’m going to fill the ludicrously priced big box but I can’t bear the thought of going to another post office where they probably only have big boxes anyway. Why don’t I just make my own parcel you may ask? It’s because the same weight would probably cost twice as much.

The lady then gave me TWO FORMS to accompany the box which means, obviously, that I’ll have to go back to the post office to send it once I’ve filled it. I’m going to try and find a country PO in the hope that it will be less stressful, but with Christmas coming up, I think it’s a lost cause. I’m also hoping I’ll have a friendly little corner post office in Blois but that’s not for another two and a half years.

This entry was posted in France, French customs, Life in France and tagged French post office. Bookmark the permalink.

3 Responses to The French Post Office – a love-hate relationship