Spring Windows in the Palais Royal

It’s grey and miserable outside, even though it’s 13°, but with winter sales starting tomorrow, the spring windows have already appeared. I thought I’d try and cheer myself up by visiting some of the clothing shops in the Palais Royal. 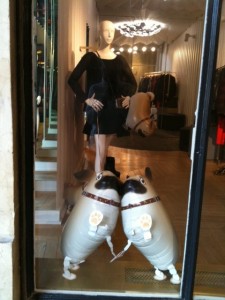 But I was disappointed. Just look at this one. I’m stunned that anyone should choose to dress their window using such ugly mutts. But then I’m not really a dog lover. I used to be. When I was a kid, we had a half-corgi (the other half jumped the fence as my mother used to say) called Taffy whom I adored. I used to take him for long walks after school and talk to him in French. Unfortunately he developed heart worm, which is often the way in the tropics. One afternoon, I came home from uni. My parents were sitting under the honeysuckle trellis in the back yard looking very forlorn. “Taffy has to be put down (what a euphemism!). We’re not up to it so you and DrummerBrother have to take him to the vet.” Oh great! Ever obedient, we carried him sorrowfully to the car. I cried the whole way there and the whole way back. Funny how neither DrummerBrother or I have ever had a pet while ActorBrother (who was probably off catching snakes) has always had a dog … 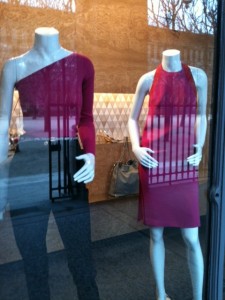 Well, enough about dogs. I then walked down the other end of the gallery to see what Stella McCartney had to show. I really don’t think her windows are any better. The clothes are not even very attractive. However, I love the effect caused by the reflection of the fences along the Palais Royal. It’s not until you take the photo that you can actually see them. Seriously, would you be tempted to buy that dress on the right? And how come the dummies don’t have heads? The one in the picture above is bald. I don’t think that’s particularly seductive either! 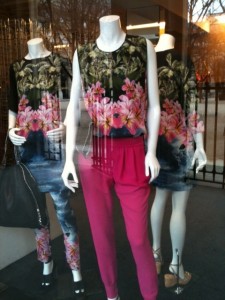 The other window isn’t that much better. I suppose it’s a little more colourful but that’s about all. This isn’t your bottom of the range stuff. We’re looking at 700 euros for a dress and 350 for a pair of trousers. It’s not as bad as Jérôme Huillier admittedly. I didn’t even bother taking photos of their window. It all looks completely synthetic to me. I should console myself with the fact that I’m not tempted to buy anything! Except one of those little black dresses in La Petite Robe Noire, but they’re completely out of my market.

I’ll wait until the sales frenzy dies down before I go and do a bit of shopping somewhere else.