Miss Bibi and the Palais Royal in Paris

Posted on November 3, 2011 by Rosemary Kneipp 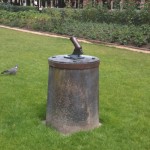 Ow! that was loud! I always forget. At 12 noon every Wednesday, the time cannon in the Palais Royal gardens goes off. Initially installed in 1786 on the Paris meridian by a clockmaker called Rousseau who had a shop on one side of the gardens, it would go off at exactly midday on sunny days. The simple mechanism was ingenious. A fuse under a  small magnifying glass was sparked by the sun’s rays. At the time, it was used to adjust all the clocks in Paris. It was stolen in 1998 but was eventually replaced and has been working again since the beginning of the year. Sadly, it doesn’t have the magnifying glass system anymore and doesn’t depend on the weather.

There are lots of other surprising things in the Palais Royal galeries. All sorts of interesting 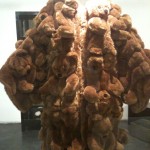 boutiques. One day I even saw a fur coat made of teddy bears! Today, the shops are very chic, with Stella McCartney and La Petite Robe Noire (but where would I wear a little black dress ?), Delage and Corto Moltedo, all way over my price range of course.

In the galerie Beaujolais, there’s a shop that sells ribbons for medals. You know, decorative medals like the legion of honour. It’s next to another speciality shop called Le Magasin à l’Oriental, opened in 1818, a real Ali Baba’s cave that sells pipes and other things of that ilk. In the Galerie Montpensier on the other side, there’s a beautiful toy shop with the most wonderful collection of dolls and wooden toys. And just opposite, a shop called Anna Joliet that sells hand-painted music boxes. You can pick your box and pick your music. Mine plays the theme from Doctor Zhivago. L’Escalier d’Argent, run by madame Danou Jacquard, possesses a unique collection of over a hundred men’s vests made out of 18th century-inspired fabric and tailored according to the period of Louis XVI. It also sells silver jewellery. 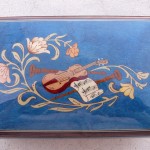 But my favourite is Miss Bibi. L’Escalier d’Argent used to have a tiny showroom in the Galerie Valois with a dusty collection of bow ties. One day, we saw they had taken everything out and were redoing it. The sign came down and after a while we saw them putting in a sort of shadow box. It was hard to imagine what sort of shop it could be, it’s literally about two metres square. But it’s turned into an increasingly popular jewellery store called Miss Bibi. “Bibi” is short for “bibelot” or knick-knack. But it’s the clever window dressing that attracts the customers.  The shadow box with its tiny shelves fills up almost the entire window and the jewellery, “inspired by the world of childhood and nostalgia”, is displayed on miniature items of furniture and little houses and other original items. I didn’t believe for one minute it could work but it’s always full.  At 50 to 200 euros apiece, maybe it’s the only shop in the Palais Royal that’s affordable for most people. 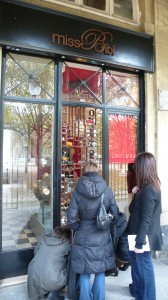 Don’t forgot to sign up and receive the latest posts in your mail box or on your smart phone!

10 Responses to Miss Bibi and the Palais Royal in Paris