Posted on January 3, 2012 by Rosemary Kneipp 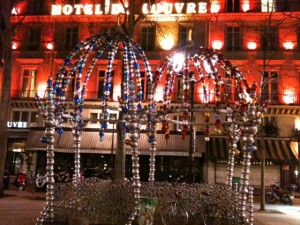 Now this is another “sculpture” near the Palais Royal that I’m not keen on, because I find it somewhat garish, but I have some (perfectly normal French) friends who think it’s wonderful. It’s the entrance to the Palais Royal metro on Place Colette and it’s called “Le Kiosque des Noctambules” (The Night Revellers’ Kiosk) and was designed and built in 2000 by Jean-Michel Othoniel. 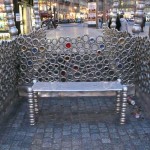 archeologue.over-blog. It says that the two domes are placed on top of a frame forming an eight (not immediately obvious), which is the symbol of eternity. A little bench at one end is there to welcome night revellers (I must check next time if there are any). The little fence around the bench consists of a series of hammered metal rings incrusted with coloured glass. 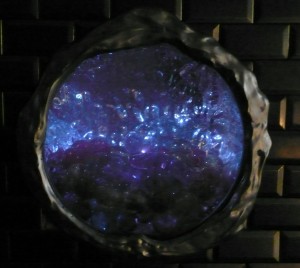 When you go down the steps to the metro, you come to the second part of the  installation. There are two large circles embedded in the brick wall with coloured beads inside an Art Nouveau surround. The “jewels” apparently blink out at you in the dark corridor. Mystery downstairs, brightness upstairs is the idea it seems. I’ve always found them a little strange personally. I didn’t realise there was any connection with the other part. 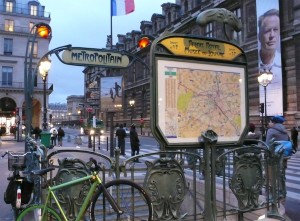 I personally prefer Hector Guimardt’s traditional metro entrance in front of the Louvre, built in 1900, but that’s not surprising because I’m a great fan of Art Nouveau.

5 Responses to The Night Revellers’ Kiosk