Powerwalking down to Concorde in the snow!

On Friday, Relationnel and I went to the sales to replace some of the clothing that disappeared with our missing suitcase. We left our sports shoes until last and I was a bit reluctant to make the effort. Fortunately, Relationnel overcame my reticence and we went to Au Vieux Campeur. This time, I was eventually helped by a young man who was keen to practise his English and talk about Australia. The shoes I bought are actually much better (and cheaper) than the last ones. Thanks to Aurelia (see comment), I managed to get a receipt for the ones in the suitcase. 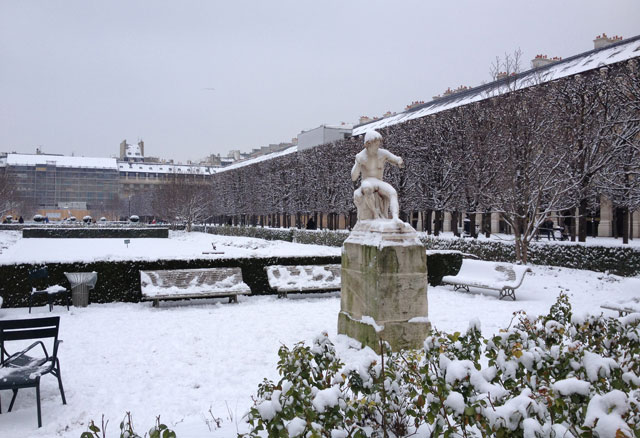 So when I woke up on Saturday and saw that the snow was still on the ground, I was able to go power walking for the first time in months.  At about 10.30, I headed for the Tuileries where I was certain I’d find a good depth of snow. 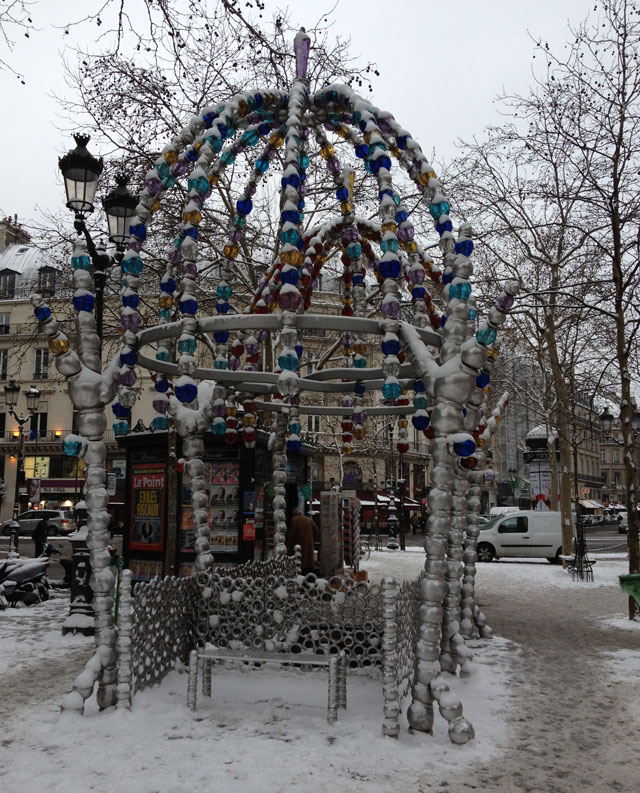 Next to the Night Revellers’ Kiosk on Place Colette, greatly improved in my opinion by its layer of snow, the waiter from Le Nemours was sweeping a path across the Place, doing what all retailers and caretakers should do: remove the snow from the pavement to avoid accidents, particularly when the temperature drops and it becomes icy. 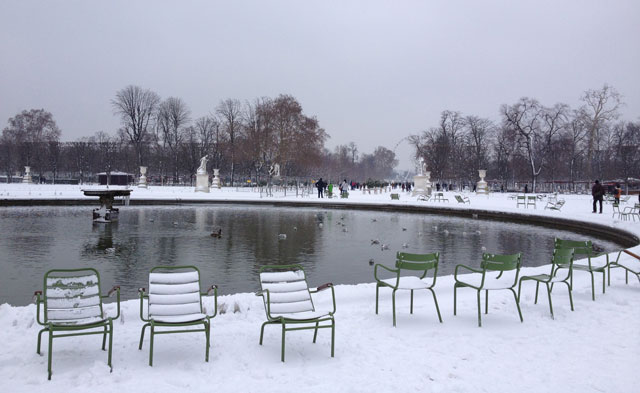 Ducks on the first pond in the Tuileries

In the Tuileries, there were no sailing boats on the first pond – just the ducks swimming busily around the unfrozen section. 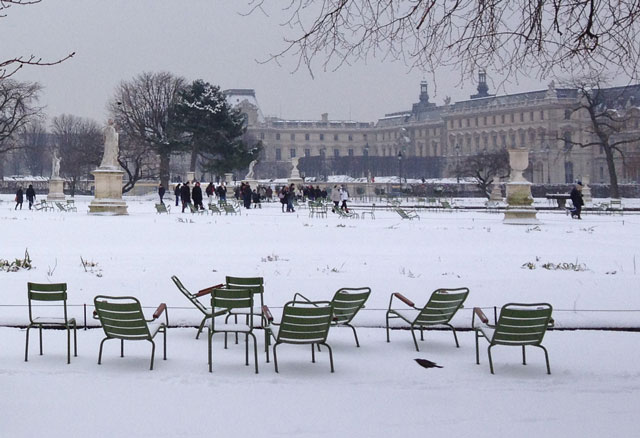 Looking towards the Louvre Museum

Neither was there anyone sitting on the green chairs facing the Louvre and piled high with snow. 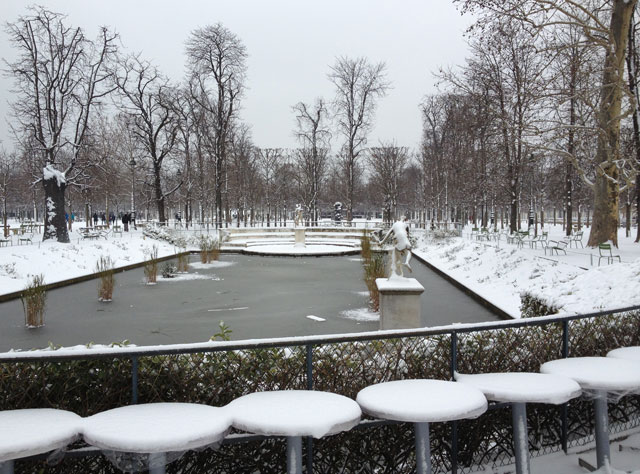 I checked out the pond next to Café Diane, one of my five favourite lunch venues near the Louvre, but the tables were deserted there too. 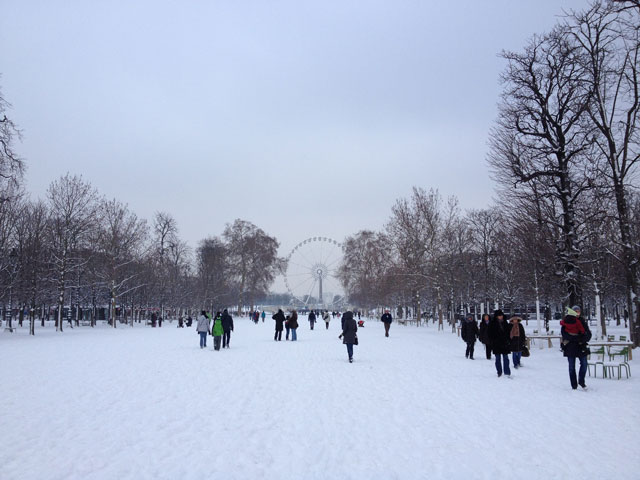 In the distance, the Big Wheel was just a haze and the whole scene looked as though it were in black and white! 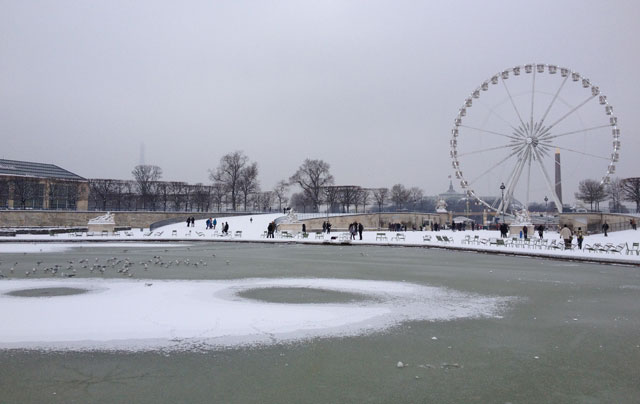 Closer up, I could see the seagulls on the pond near the Big Wheel with the Orangerie and Place de la Concorde in the distance. 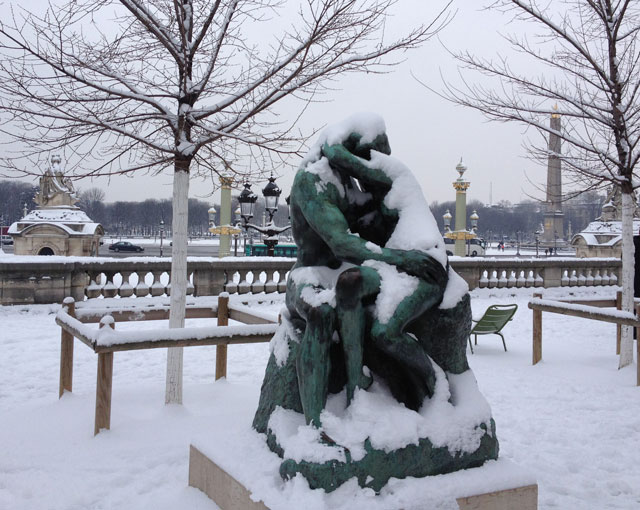 There were still two people kissing further down, though, undeterred by the cold snow. 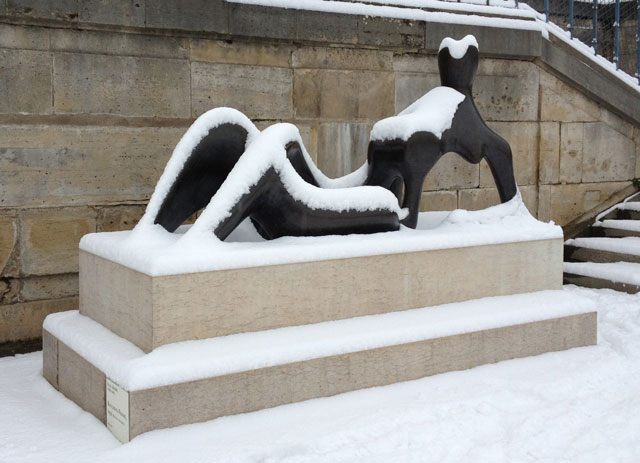 As I made my way back, Henry Moore’s Reclining figure seemed to be making the most of the snowfall. 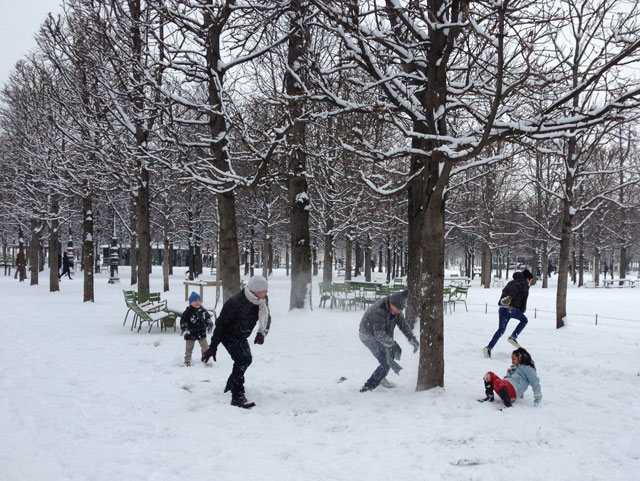 Family having a snow fight in the Tuileries Gardens

Further on, a family was having a joyous snowfight, and aimed a snowball at me when they saw me taking photos. But I ducked just in time! 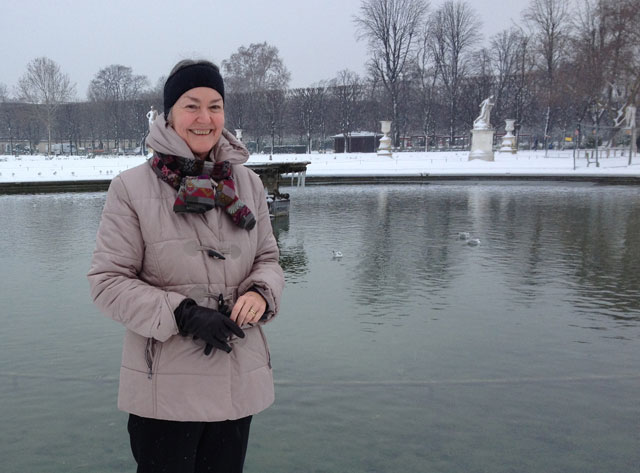 In front of the first pond in the Tuileries

When I reached the last pond, I asked a photographer with his tripod if he wouldn’t mind taking a photo of me with my iPhone. I figured he’d know how to take a good photo first off. And he did! I’m wearing my new headband which is the warmest thing I’ve had in a long time – much more comfortable than a woolly hat and wonderful protection for my ears, not to mention my rabbit-lined leather gloves. It was about 1°C after all.

Africans selling hats and gloves in the Tuileries Gardens

As I walked back to the Triumphal Arch, I saw that the itinerant sellers were spreading their wares – hats and gloves – to the relief of unprepared tourists. 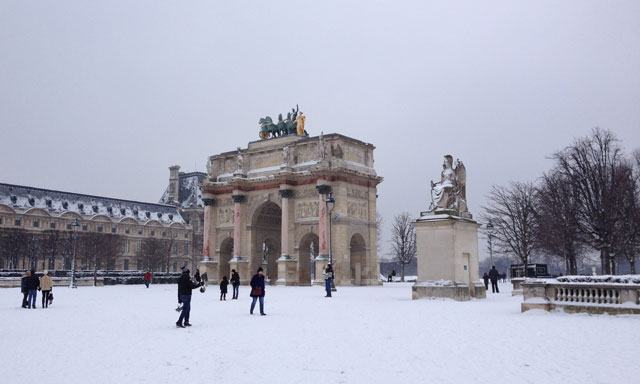 By the time I got back to the Palais Royal, there were people galore!

This entry was posted in Architecture, Paris and tagged powerwalking, snow in Paris, the Night Revellers' Kiosk. Bookmark the permalink.

6 Responses to Powerwalking down to Concorde in the snow!