Wolves in the Palais Royal

Posted on January 2, 2012 by Rosemary Kneipp 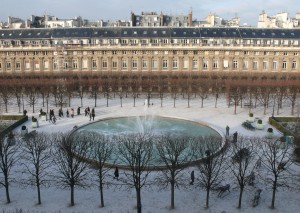 People on the left, wolves on the right

Imagine my surprise when I looked out the window on 2nd January 2008 to see a pack of wolves in the Palais Royal gardens, made even more realistic by a blanket of snow! Even up close they were pretty convincing. The sculpteur, Olivier Estoppey, had managed to make them look as though they were running. They disappeared after a while and, to my great surprise, turned up again in a French detective film called Le Crime est notre affaire. 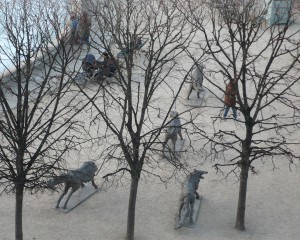 It’s because we’re next to the French Ministry of Culture that the Palais Royal gardens are often the site of temporary exhibitions sponsored by an association called Sculptures au Palais Royal. Some, like the wolves, are truly artistic, but most of them are modern sculptures that I personally think are awful. Maybe it’s a question of generation because Thoughtful, who’s 22, thinks they’re wonderful. He likes the contrast between the old and new. Being Australian, I just like the old! 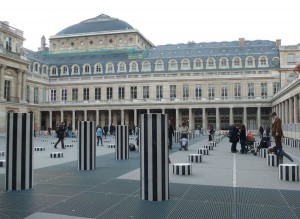 Of course, the Palais Royal’s most famous “sculpture” is Les Deux Plateaux, better known as the Buren columns. These “stripey” black and white columns of different sizes are very popular with tourists but they are also a wonderful playground for the local kids who come up with all sorts of inventive games. They climb on them, slalom around them on their little scooters and bikes and put their dolls on top.

When work first began on the columns in 1985 on the site of a parking lot, it caused a furore. The objectors eventually managed to find a legal loophole and have the work stopped. By then it had escalated from a discussion on the appropriateness of modern art in an historical context to a major political debate. 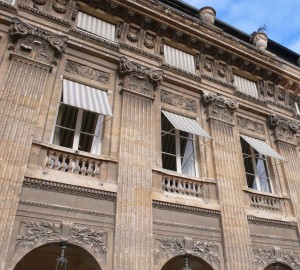 Every day after work, Relationnel used to stop by and read the day’s graffiti, slogans and caricatures on the boardings around the worksite. Everyone seemed to have joined the debate. It became increasingly heated and venemous with insults and slander on every side. The French daily Le Figaro launched a major offensive which ultimately won the day and the work was finally resumed in 1986. Major renovations were carried out and completed in 2011 so the columns are all looking very spruce.

When  I first saw them, I didn’t like them at all because I couldn’t see any connection between the so-called “sculpture” and the Palais Royal but when I realised that the stripes were actually a reflection of the regulatory grey and white striped blinds on my windows, I adopted them!

This entry was posted in Paris and tagged Buren columns, Palais Royal. Bookmark the permalink.

5 Responses to Wolves in the Palais Royal