Who’s Getting Married in France? 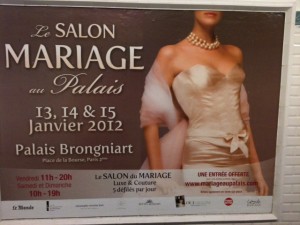 The posters are up for the Paris wedding fair. I think it’s amusing that it’s being held in Palais Brongniart which I thought was the precinct of the Paris stock exchange. One thing I’ve noticed in recent years is that wedding dresses are looking more and more like evening dresses, showing as much flesh as possible. My wedding dresses (note the plural) are definitely old hat. Not that French women are having weddings much these days, according to the statistics. It’s certainly the case of Black Cat’s friends. I asked her why. It seems that most couples don’t get married because it costs so much. Well, if you’re having your hens’ party in Madrid like one of her friends, I suppose it does!

So what are they doing instead? Well, they’re pacsing. The PACS (pacte civil de solidarité) is an agreement between two adults of the same or different sex to organise their community life. The current form dates from 2005 and is very similar to marriage except for certain rights (entitlement to a percentage of the other person’s retirement after death for example) and the fact that you don’t have to go through a divorce procedure if you want to end the contract. That in itself can be a bonus, but it hardly seems the ideal way to start your life as a couple!

You register the agreement with the court and can even have a ceremony similar to that of a registry marriage. Curiously, it is not same sex couples who are becoming pacsed the most but heterosexual couples. It seems that young people feel perfectly comfortable with just inviting their close friends along to their PACS ceremony but wouldn’t dream of not having all the second cousins and sixth-best friends to their wedding.

I don’t know if anything similar exists in the English-speaking countries.

This entry was posted in France, French customs and tagged salon mariage. Bookmark the permalink.

5 Responses to Who’s Getting Married in France?