Powerwalking down to Pont Neuf – Part 3 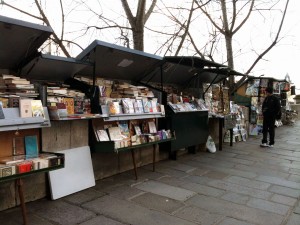 Last time, in Part 2, I told you about Saint Germain l’Auxerrois but the time before, in Part 1, I explained about Pont Neuf actually being the oldest bridge in Paris. After leaving Saint Germain, you turn left along the Seine to the bridge. Halfway across, there is an equestrian statue in honour of Henry IV and wonderful views on either side.  Turn right after the bridge and you’ll go past the bouquinistes selling their second-hand books and anything else they think tourists might be interested in. 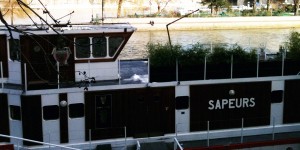 A little further on, you’ll see what is probably the most unusual fire station in Paris – it’s a river boat! Paris actually has a surprising number of fire stations.  There are two in our neighbourhood alone. As soon as the weather permits, they take their fire trucks out in the street to clean them. I personally think they want to show off their uniforms as well! Last Sunday, when we were going to the market, there was a fireman standing by watching a firewoman (?) hosing down a truck – and giving instructions on how to do it, of course! 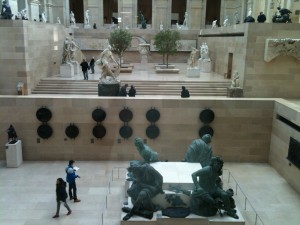 And now I have a bit of etymology for you. You might notice that the boat says “sapeurs“. Firemen in French are called “sapeurs-pompiers“. This is because in the Middle Ages, the first firemen often had to knock down (saper) the houses around the one that was burning to stop the fire from going any further.  The “pompier” bit comes from pumping water.

If you keep going, you’ll arrive at the Passerelle des Arts and can admire all the padlocks as you go past. Cross rue de Rivoli and walk through to the Place Carrée du Louvre, then left to the pyramids and right through the arcade with its wonderful plate glass windows and  view of some of the museum’s antique sculptures. 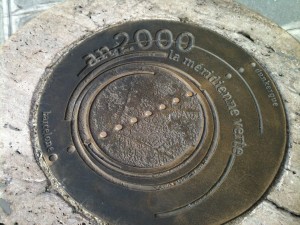 Just in front of the Conseil Constitutionnel, you’ll see a rather nondescript column with a plaque on top saying “an 2000 la méridienne verte“. This was a project promoted by Paul Chemetov to celebrate the year 2000. Trees were planted along the Paris meridian which crosses France from North to South (from Dunkirk to Prats-de-Mollo-la-Preste). A big picnic was held that year on Bastille Day right along the meridian. Wish I’d known about it! 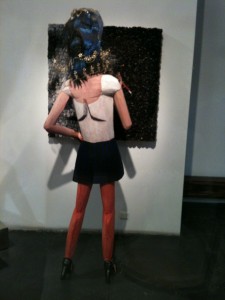 Turn right onto Place Colette, home of the Comedie Française theatre where Molière died, with its scaffolding, then through the arcade to the Buren columns. In front you’ll see a wooden building which is temporarily housing the theatre. Walk around it to the right and take a look at the exhibitions after the portico. They do have the weirdest things! But they’re often very clever, like the ones in the Pompidou Centre. A little look to see what Miss Bibi‘s up to and then I’m ready to climb the stairs to the 4th floor!

5 Responses to Powerwalking down to Pont Neuf – Part 3