Sewing Machines I Have Known 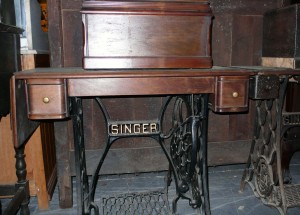 Last Sunday when we were on another dépôt-vente excursion, I came across two Singer treadle sewing machines, one of which seemed in very good condition and a bargain at 40 euros. A nostalgia trip of course. My first sewing machine was one of those little kid’s ones that only did chain stitch. For the uninitiated, it means that you just had to pull on the thread and the whole lot would come undone.

I was a devoted sewer as a child. I had a Barbie doll that I made clothes for, including miniature bras and pants and skirts with zippers. So I was certainly not going to be satisfied with a machine that only did chain stitch. Mum didn’t think at 9 or 10 that I was old enough to use her electric Singer machine but I was very insistent so she bought me a hand-operated Singer. 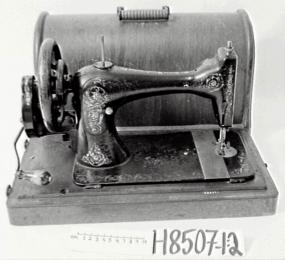 Photo from The Power House Museum

I used to set it up on a low table on the veranda and sew away to my heart’s content. But I soon saw the limits of a hand-operated machine, particularly as Mum’s did zigzag and made buttonholes. She told me that the day I could sew a straight line in a piece of material without any markings, I could use her machine. Well, I mastered that in next to no time and migrated to the real thing. At school, we used treadle machines and I used to help all the others when they got stuck. We made boring things such as aprons. 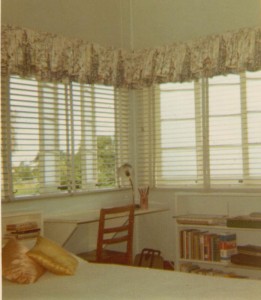 By 13, I was making my own clothes. By 16, I was making everything I wore. I could take the machine to pieces and put it back together as well! And do you know what happened to the hand-operated machine? I decided when I was a teenager to redecorate my bedroom. I made little “flutter” curtains with sketches of Montmartre on them (already getting ready to live the French dream) and desperately wanted a white chenille bedspread. But Mum, very practical, was against it. I was not known for my tidiness. So I sold the sewing machine to buy the white bedspread myself!

When I came to France, the thing I most missed was Mum’s sewing machine. I’d practically made a whole new wardrobe before I left, because living in Townsville meant I only had summer clothes. So I made woollen skirts and tailored jackets that stood me in good stead for quite a while. I must have borrowed a machine from time to time though because I can remember some of the clothes I made in those early years in France. 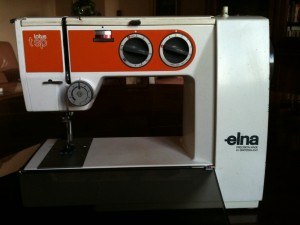 Mum’s wedding present was a sewing machine. We went together to choose it at the BHV in Paris. By then, I wanted something more sophisticated of course that would sew things like jersey. I also needed something compact so I chose a little Elna. Mum bought the machine and then announced she was going off for the rest of the day by train to Liseux in Normandy, to see the church of Saint Therese. I didn’t know what to do. Mum didn’t speak French and Dad would never forgive me if I let her go by herself. What if something happened? I was getting married in two days’ time! But how can you stop your own (very determined) mother from doing something?

So I took her to the station and helped her buy the ticket and went home to face the music. After calculating the time she would need to go there and back, Dad spent a couple of hours down at the bus stop waiting for her! She came home safe and sound, perfectly delighted with herself and her ability to get around France on her own. Mothers!! 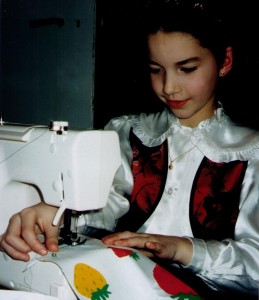 My trusty Elna is still going strong although I rarely do much sewing today. I made most of Black Cat’s clothes when she was little and when she was ten, I bought her an electric machine, also a Singer, a special child’s machine with two buttons – a hare and a tortoise. She didn’t use it very much to my disappointment, but I didn’t say anything. Then suddenly, when she was in her late teens, she became a keen sewer, much more adventurous than me, and she occasionally stuns everyone with a new outfit. A friend of mine has lent her a Singer, probably about the same one as Mum had!

5 Responses to Sewing Machines I Have Known